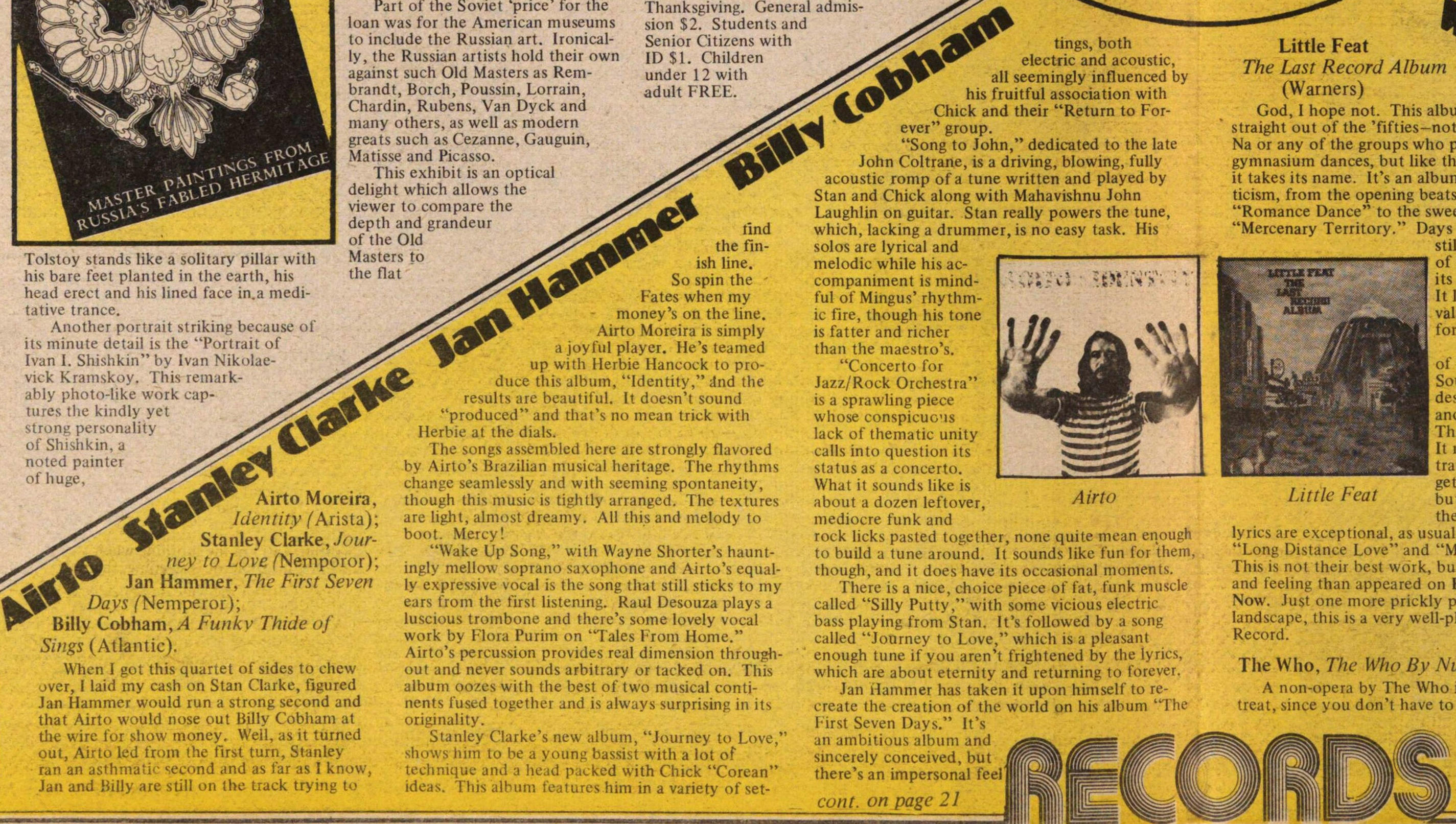 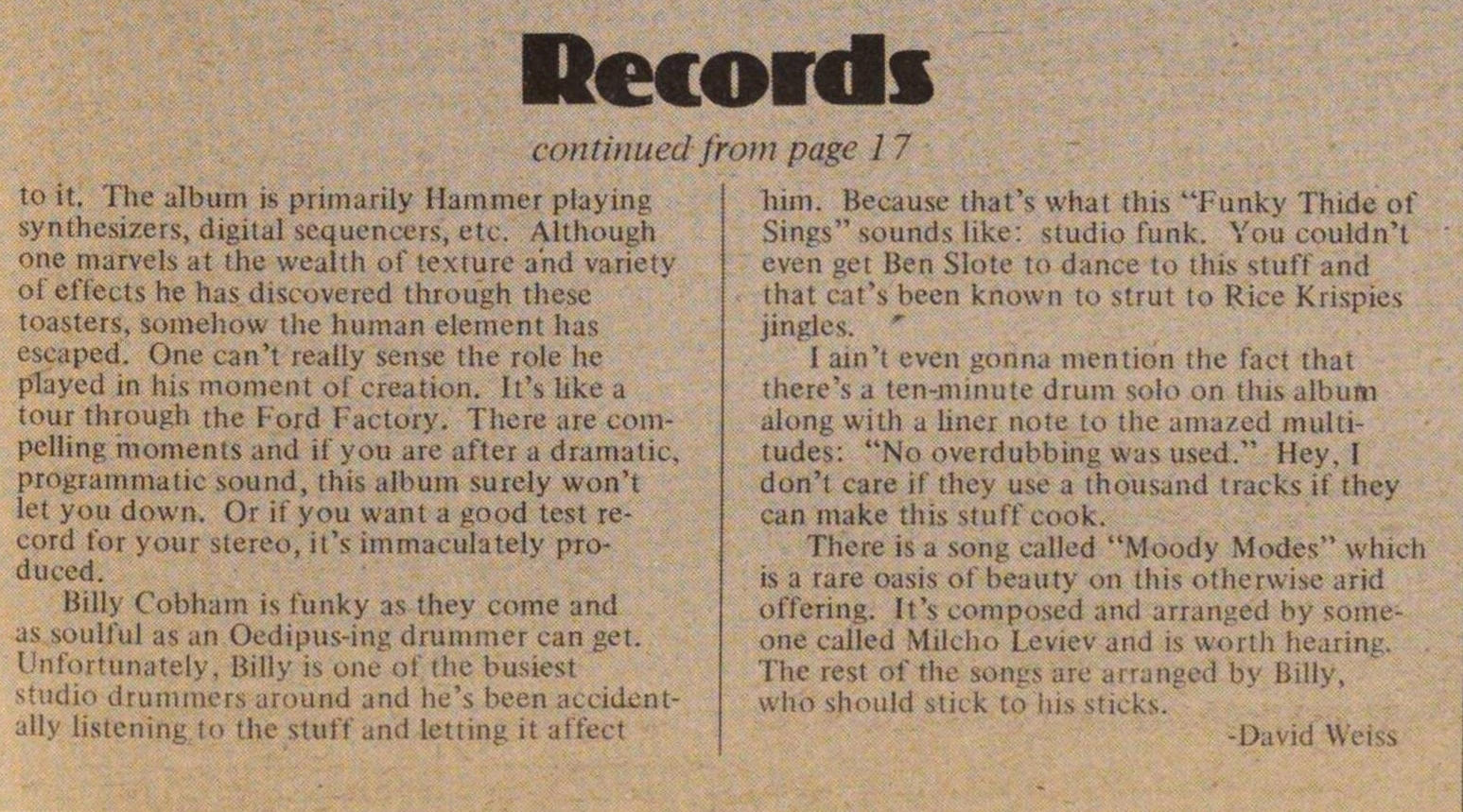 When I got this quartet of sides to chew over, I laid my cash on Stan Clarke, figured Jan Hammer would run a strong second and that Airto would nose out Billy Cobham at the wire for show money. Well, as it turned out, Airto led from the first turn, Stanley ran an asthmatic second and as far as I know Jan and Billy are still on the track trying to find the finish line. So spin the Fates when my money's on the line. Airto Moreira is simply a joyful player. He's teamed up with Herbie Hancock to produce this album, "Identity," and the results are beautiful. It doesn’t sound "produced" and that's no mean trick with Herbie at the dials.

The songs assembled here are strongly flavored by Airto's Brazilian musical heritage. The rhythms change seamlessly and with seeming spontaneity, though this music is tightly arranged. The textures are light, almost dreamy. All this and melody to boot. Mercy!

"Wake Up Song," with Wayne Shorter's hauntingly mellow soprano saxophone and Airto's equally expressive vocal is the song that still sticks to my ears from the first listening. Raul Desouza plays a luscious trombone and there's some lovely vocal work by Flora Purim on "Tales From Home." Airto's percussion provides real dimension throughout and never sounds arbitrary or tacked on. This album oozes with the best of two musical continents fused together and is always surprising in its originality.

Stanley Clarke's new album, "Journey to Love," shows him to be a young bassist with a lot of technique and a head packed with Chick "Corean" ideas. This album features him in a variety of settings, both electric and acoustic, all seemingly influenced by his fruitful association with Chick and their "Return to Forever" group.

"Song to John," dedicated to the late John Coltrane, is a driving, blowing, fully acoustic romp of a tune written and played by Stan and Chick along with Mahavishnu John Laughlin on guitar. Stan really powers the tune, which, lacking a drummer, is no easy task. His solos are lyrical and melodic while his accompaniment is mindful of Mingus' rhythmic fire, though his tone is fatter and richer than the maestro's.

"Concerto for Jazz/Rock Orchestra" is a sprawling piece whose conspicuous lack of thematic unity calls into question its status as a concerto. What it sounds like is about a dozen leftover, mediocre funk and rock licks pasted together, none quite mean enough to build a tune around. It sounds like fun for them, though, and it does have its occasional moment.

There is a nice, choice piece of fat, funk muscle called "Silly Putty," with some vicious electric bass playing from Stan. It's followed by a song called "Journey to Love," which is a pleasant enough tune if you aren't frightened by the lyrics, which are about eternity and returning to forever.

Jan Hammer has taken it upon himself to recreate the creation of the world on his album "The First Seven Days." It's an ambitious album and sincerely conceived, but there's an impersonal feel

to it. The album is primarily Hammer playing synthesizers, digital sequencers, etc. Although one marvels at the wealth of texture and variety of effects he has discovered through these toasters, somehow the human element has escaped. One can't really sense the role he played in his moment of creation. It's like a tour through the Ford Factory. There are compelling moments and if you are after a dramatic, programmatic sound, this album surely won't let you down. Or if you want a good test record for your stereo, it's immaculately produced.

Billy Cobham is funky as they come and as soulful as an Oedipus-ing drummer can get. Unfortunately, Billy is one of the busiest studio drummers around and he's been accidentally listening to the stuff and letting it affect him. Because that's what this "Funky Thide of Sings" sounds like: studio funk. You couldn't even get Ben Slote to dance to this stuff and that cat's been known to srut to Rice Krispies jingles.

I ain't even gonna mention the fact that there's a ten-minute drum solo on this album along with a liner note to the amazed multitudes: "No overdubbing was used." Hey, I don't care if they use a thousand tracks if they can make this stuff cook.

There is a song called "Moody Modes" which is a rare oasis of beauty on this otherwise arid offering. It's composed and arranged by someone called Milcho Leviev and is worth hearing. The rest of the songs are arranged by Billy, who should stick to his sticks.