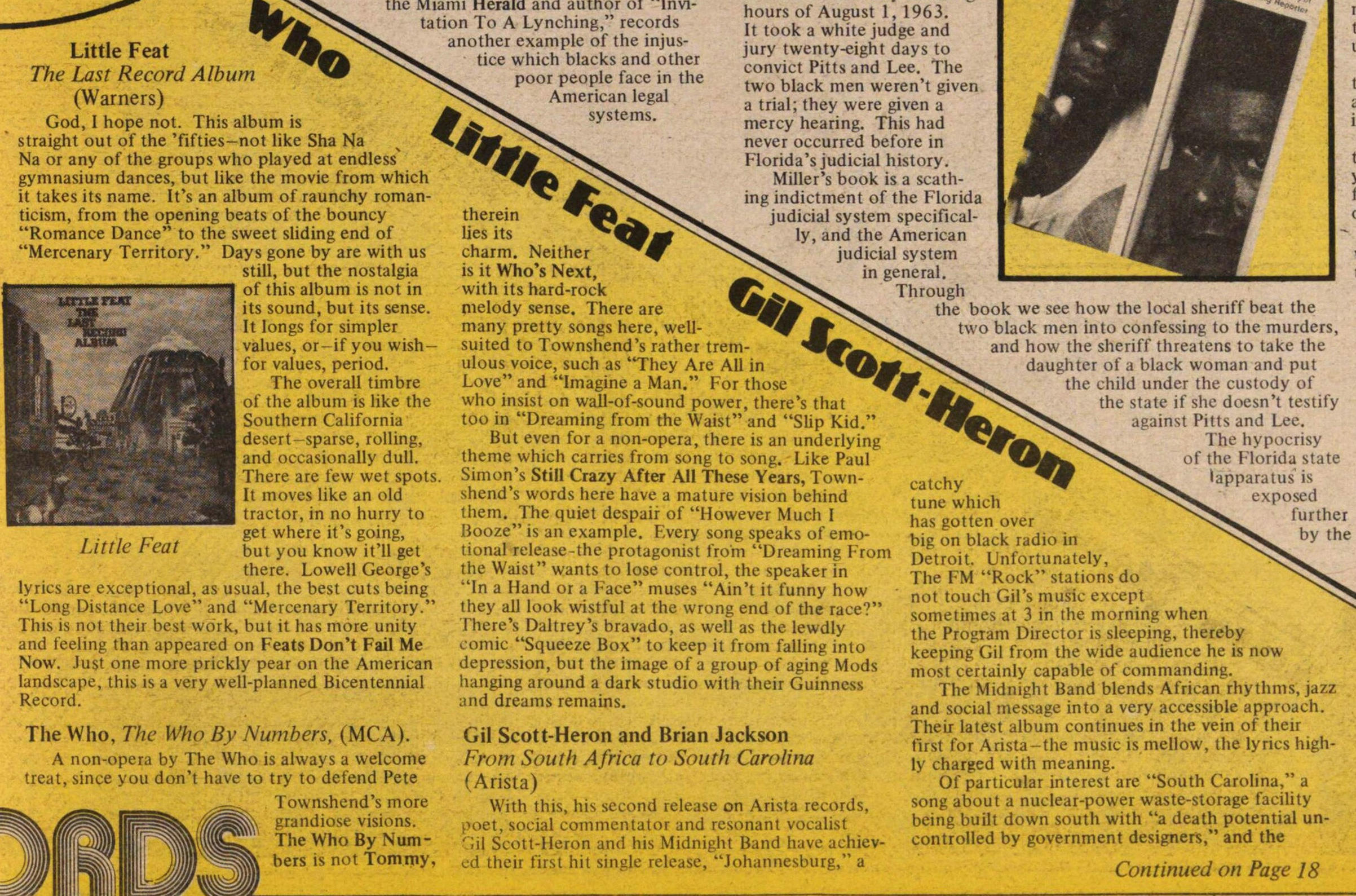 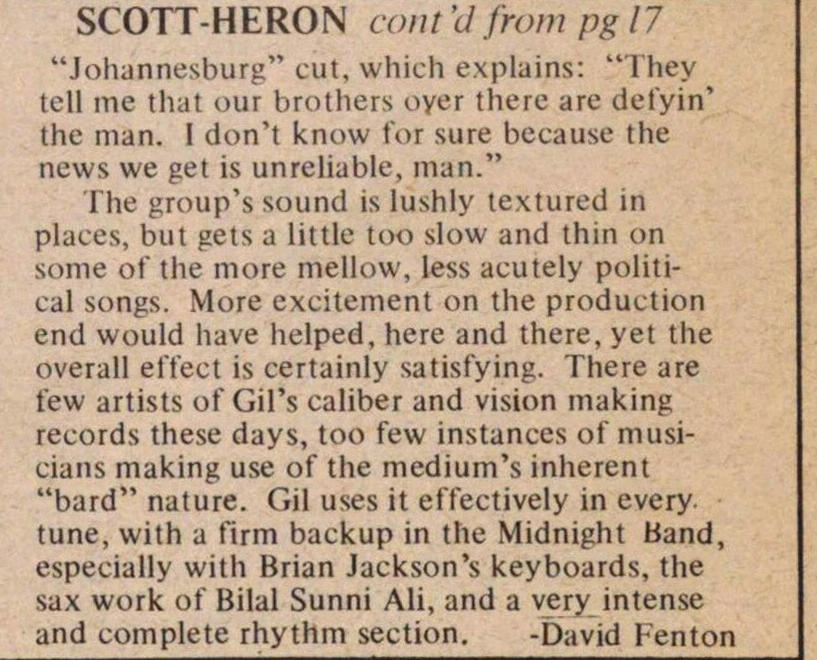 #fi s # L s s Little Feat The Last Record Album (Warners) God, I hope not. This album is straight out of the 'fïfties-not like Sha Na Na or any of the groups who played at endless gymnasium dances, but like the movie from which it takes its name. It's an album of raunchy romanticism, from the opening beats of the bouncy "Romance Dance" to the sweet slidina end of "Mercenary Territory." Days gone by are with us still, but the nostalgia I of this album is not in its sound, but its sense. It longs for simpler values, or-if you wishfor values, period. The overall timbre I of the album is like the I Southern California I desert-sparse, rolling, I and occasionally dull. I There are few wet spots. I It moves like an old I tractor, in no hurry to get where it's going, bu! you know it'll get there. Lowell George's lyrics are exceptional, as usual, the best cuts being "Long Distance Love" and "Merccnary Territory." Tliis is not their best work, but it has more unity and teeling than appeared on Feats Don't Fail Me Now. Just one more prickly pear on the American landscape, this is a very well-planned Bicentennial Record. The Who, The Who By Numbers, (MCA). A non-opera by The Who is always a welcome treat, since you don't have to try to defend Pete Townshend s more gandióse vislons, TheWhoBy Numbers is not Tommy, therein lies its charm. Neither is it Who's Next, with its hard-rook melody sense. There are many pretty songs here. suitea to iownshend s rather tremulous voice, such as 'They Are All in Love" and "Imaeine a Man." For those who insist on wall-of-sound power, there's that too in "Dreaming from the Waist" and "Slip Kid." But even for a non-opera, there is an underlying theme which carries from song to song. Like Paul Simon's Still Crazy After All These Years, Townshend's words here have a mature visión behind tliem. The quiet despair of "However Much I Booze" is an example. F.very song speaks of emotional release-the protagonist from "Dreaming Trom the Waist" wants to lose control, the speaker in "In a Hand or a Face" muses "Ain't it funny how they all look wistful at the wrong end of the race?" There's Daltrey's bravado, as well as the lewdly comic "Squeeze Box" to keep it from falling into depression, but the image of a group of aging Mods tianging around a dark studio witli iheir Guinness and dreams remains. Gil Scott-Heron and Brian Jackson Ffom South África tu South Carolina (Arista) With tlns, liis socond release on Arista records, poet, social commentator and resonant vocalist ;ü Scott-Heron and his Midnight Band have achievcd their first hit single release, "Johannesluirg," a catchy tune which has gotten over big on black radio in Detroit. Unfortunately, The FM "Rock" stations do not touch Gil's niusk except sometimes at 3 in the morning when the Progiam Director is sleeping, thereby keeping Gil from the wide audience he is now most certainly capable of commanding. The Midnight Band blends African rhythms, jazz and social message into a very accessible approach. Theii latest album continúes in the vein of their tïrst for Arista-the music is mellow, the lyrics highly charged with meaning. Of particular interest are "South Carolina," a song about a nuclear-power waste-storage facility being built down south with "a death potential uncontrolled by government designers," and the Continued on Page 18 SCOTT-HERON cont 'dfrom pg 17 "Johannesburg" cut, which explains: "1 hey teil me thal oui brothers over therc are defyin' the man. I don't know fot sure because the news we get is unreliable, man." The group's sound is lushly textured in places, but gets a little too slow and thin on some of the more mellow, less acutely political songs. More cxcitement on the production end would have helped, here and there, yet the overall effect is certainly satisfying. There are few artists of Gil's caliber and visión making records these days, too few instances of musicians making use of the medium's inherent "bard" nature. Gil uses it effectively in every tune, with a firm backup in the Midnight Band, especially with Brian Jackson's keyboards, the sax work of Bilal Sunni Ali, and a very intense and complete rhythm section. -David Fenton