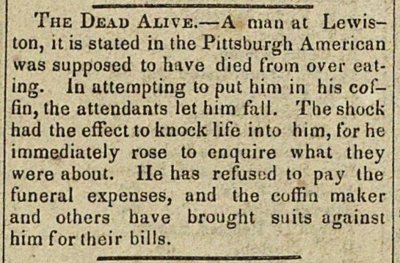 -A man atton, it is stated in the Pittsburgh American was supposed to have died from over eating. in uttempting to put him in his coffin, the attendants let him fall. The shock had the effect to knock life into him, tor he immediately rose to enquire what they were about. He has refused to pay the funeral expenses, and the coffin maker and others have brought suits against him for their bilis.