Murder And Robbery At St. Louis 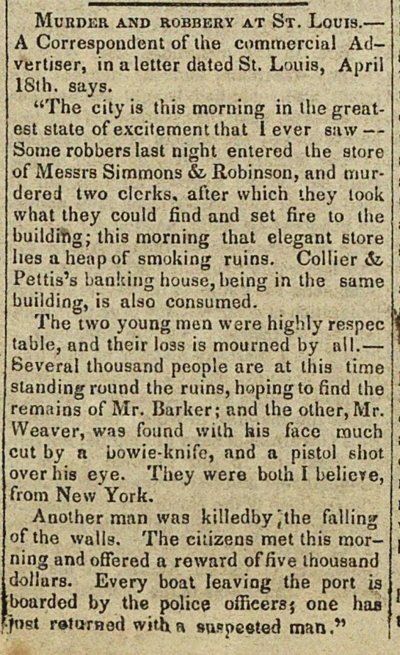 A Correspondent of the commercial Advertiser, in a letter dated St. Louis, April lSth. says. "The city is this morning in thegreatest state of excitementthat lever suw - Some robbers last night entered the store of Messrs Simmons & Robinson, and uiurdered two clcrks, after which they took what they could find and set fire to the buildirig; this morning that elegant 6tore lies a hen pof smoking ruins. Collier &, PeÃ¼is's banking house, being in the same building, is al.so consumed. The two young men were highly respec table, and their loss is mourned by all. - Beveral thousand people are at this time standing round the ruins, hoping to find the remains of Mr. Barker; and the olher, Mr. VVeaver, was found with his face couch cut by fi bowie-knife, and a pistol shot over his eye. They were both I believe, from New York. Another man was killedbyjthe falling of the walls. The citizens met this morning and offered a reward of five thousand dollars. Every boat leaving the port is boardod by the pÃ³lice oflicersj one haB fnst remrned witKa suppceted man.'