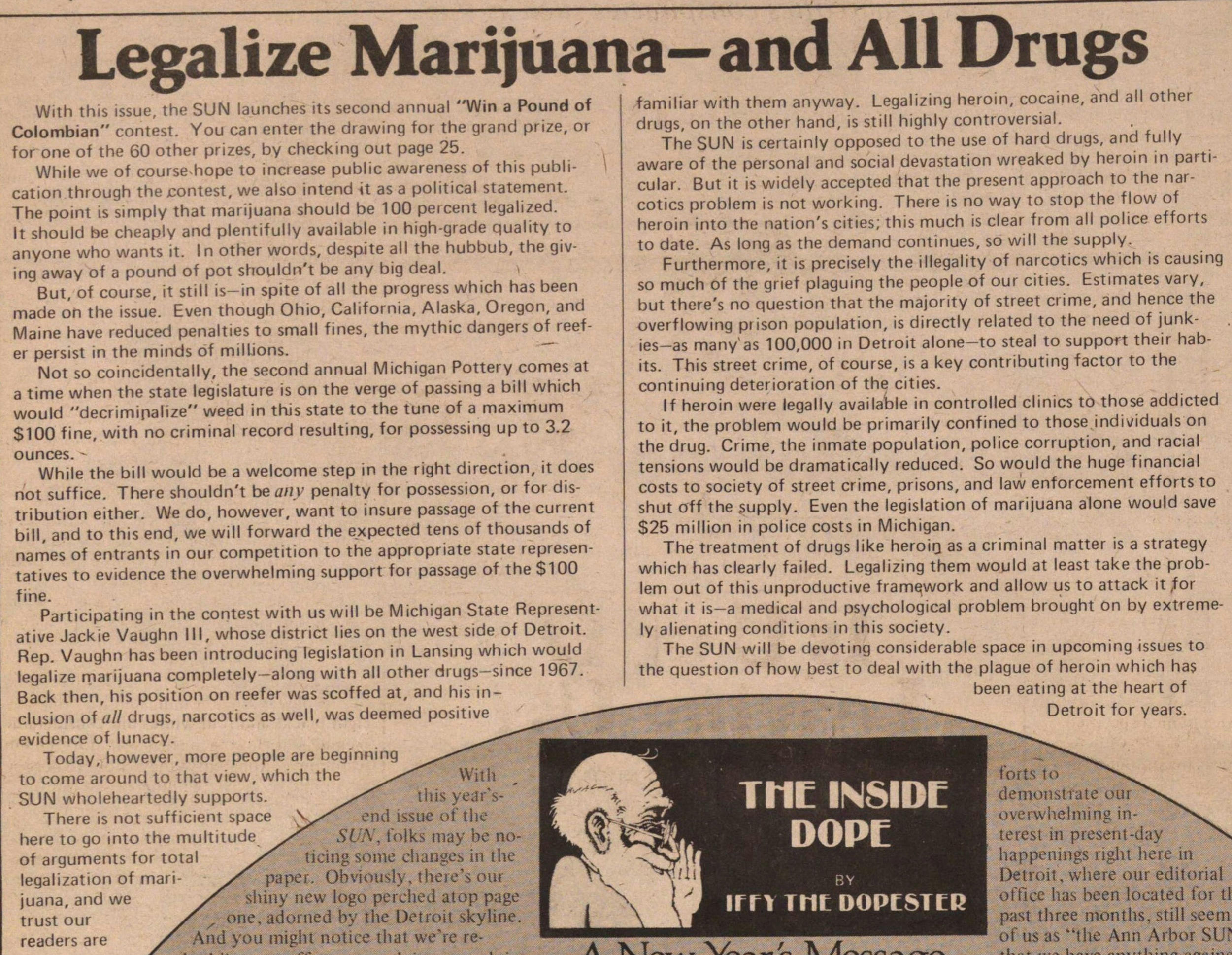 With this issue, the SUN launches its second annual "Win a Pound of Colombian" contest. You can enter the drawing for the grand prize, or for one of the 60 other prizes, by checking out page 25. While we of coursehope to increase public awareness of this publication through the contest, we also intend it as a political statement. The point is simply that marijuana should be 100 percent legaiized. It should be cheaply and plentifully available in high-grade quality to anyone who wants it. In other words, despite all the hubbub, the giving away of a pound of pot shouldn't be any big deal. But, of course, it still is-in spite of all the progress which has been made on the issue. Even though Ohio, California, Alaska, Oregon, and Maine have reduced penalties to small fines, the mythic dangers of reefer persist in the minds of millions. Not so coincidentally, the second annual Michigan Pottery comes at a time when the state legislature is on the verge of passing a bilí which would "decrimipalize" weed in this state to the tune of a maximum $100 fine, with no criminal record resulting, for possessing up to 3.2 ounces. - While the bill would be a welcome step in the right direction, it does not suffice. There shouldn't beany penalty for possession, or for distribution either. We do, however, want to insure passage of the current bill, and to this end, we will forward the expected tens of thousands of names of entrants in our competition to the appropriate state representatives to evidence the overwhelming support for passage of the $100 fine. Participating in the contest with us will be Michigan State Representative Jackie Vaughn III, whose district lies on the west side of Detroit. Rpn Vauahn has been introducing legislation in Lansing which would legalize marijuana completely-along with all other drugs-since 1967. Back then, hts position on reefer was scoffed at, and his inclusión of all drugs, narcotics as well, was deemed positive ____,_- - evidence of lunacy. Today, however, more people are beginning to come around to that view, which the SUN wholeheartedly supports. There is not sufficient space here to go into the multitude of arguments for total s legalization of marijuana, and we trust our readers are A familiar with them anyway. Legalizing heroin, cocaine, and all other drugs, on the other hand, is still highly controversial. The SUN is certainly opposed to the use of hard drugs, and fully aware of the personal and social devastation wreaked by heroin in particular. But it is widely accepted that the present approach to the narcotics problem is not working. There is no way to stop the flow of heroin into the nation's cities; this much is clear from all pólice efforts to date. As long as the demand continúes, so will the supply. Furthermore, it is precisely the illegality of narcotics which is causing so much of the grief plaguing the people of our cities. Estimates vary, but there's no question that the majority of street crime, and henee the overflowing prison population, is directly related to the need of junkies-as manyas 100,000 in Detroit alone-to steal to support their habits. This street crime, of course, is a key contributing factor to the continuing deterioration of the cities. If heroin were legally available in controlled clinics to those addicted to it, the problem would be primarily confined to those individuals on the drug. Crime, the inmate population, pólice corruption, and racial tensions would be dramatically reduced. So would the huge financial costs to society of street crime, prisons, and law enforcement efforts to shut off the supply. Even the legislation of marijuana alone would save S25 million in pólice costs in Michigan. The treatment of drugs like heroirj as a criminal matter is a strategy which has clearly failed. Legalizing them would at least take the problem out of this unproductive f ramework and allow us to attack it for what t is-a medical and psychological problem brought on by extremely alienating conditions in this society. The SUN will be devoting considerable space in upcoming issues to the auestion of how best to deal with the plaque of heroin which has been eating at the heart of Detroit tor years. ---