Is U Of D Leaving Us? 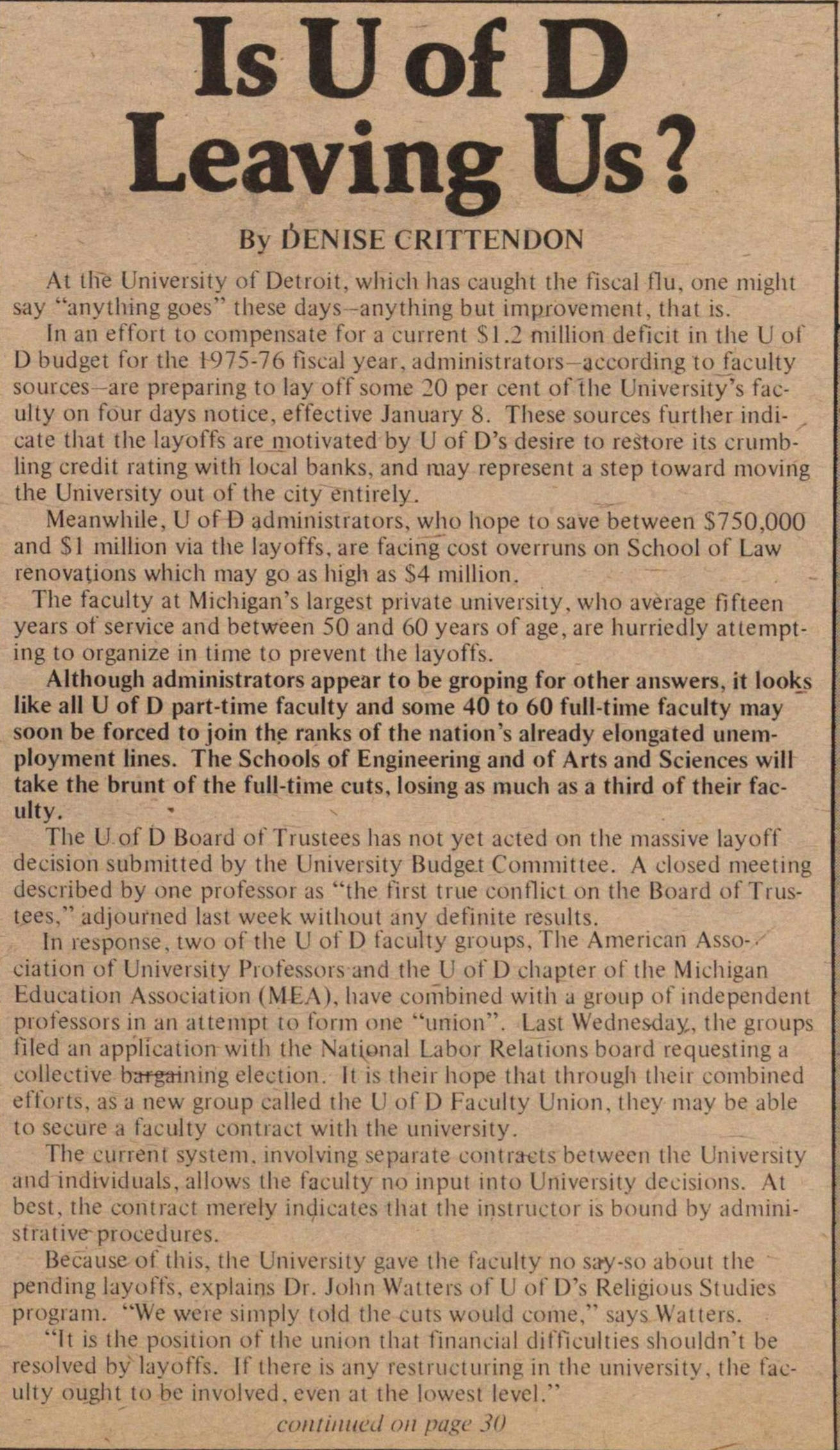 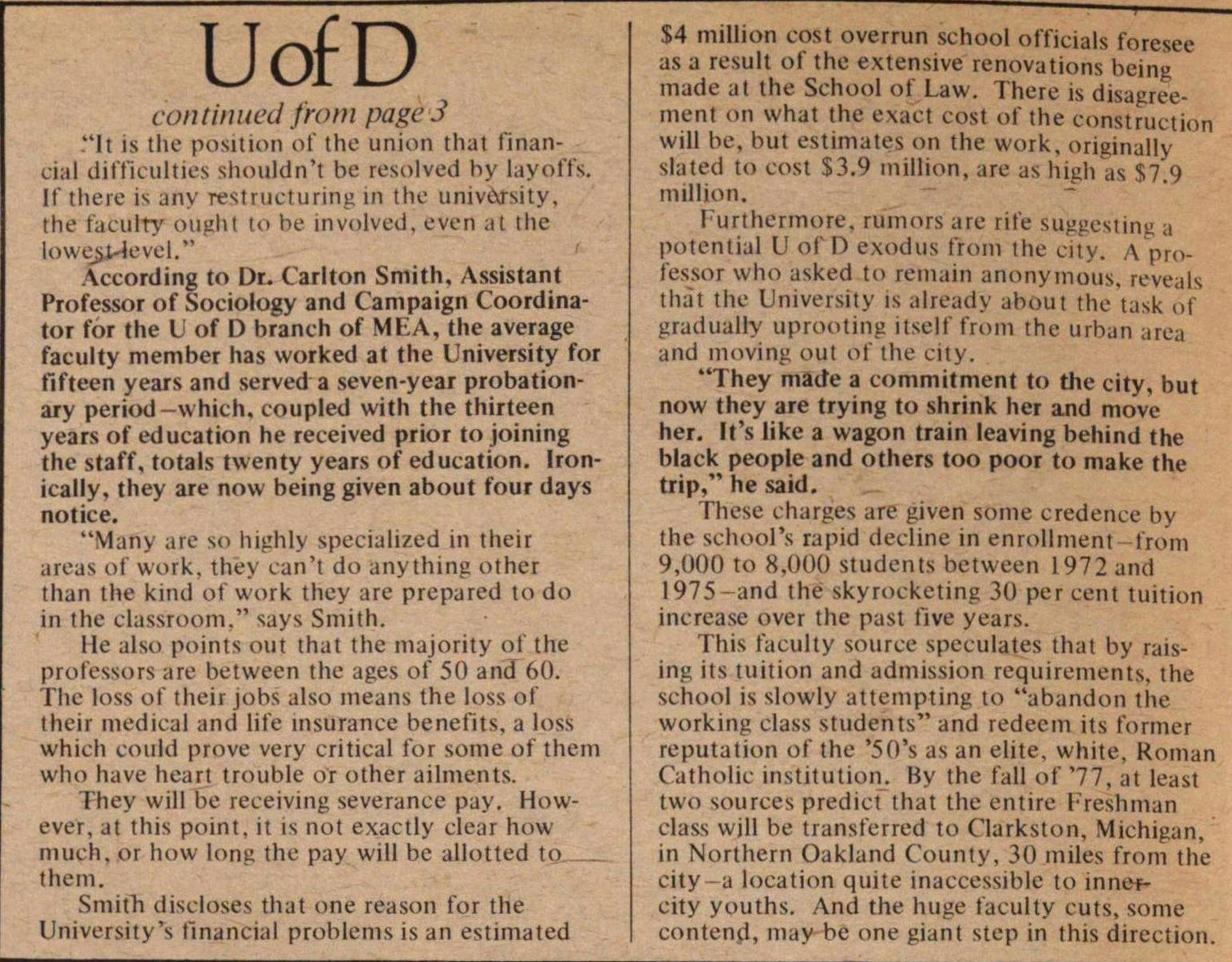 At the University oí Detroit, whicli has eaught the fiscal fiu. one miglit sa "anything goes" these days-anything but improvement. thal is. In au effort to compénsate for a current SI. 2 million deficit in the U of D budget for the 1975-76 fiscal y.ear, administrators uccording to faculty sources are preparing to lay offsome 20 per cent of "the Üniversity's taculty on four days notice, effective January 8. These sources further indícate that the layoffs are motivated by U of D's desire to restore its crumbling credit rating with local banks, and aiay represent a step toward moving the University out of the city entirely. Meanwhile, U of D administrators, who hope to save between $750,000 and $1 million via the layoffs, are facing cost ovcrruns on School of Law renovations which may go as high as S4 million. The faculty at Michigan's largest private university. who average rifteen years of service and between 50 and 60 years of age, are hurriedly atiempting to organize in time to prevent the layoffs. Although administrators appear to be groping for other answers. it looks like all U of D part-time faculty and sonie 40 to 60 full-time faculty may soon be forced to join the ranks of the nat ion 's already elongated unemployment lines. The Schools of Engineering and of Arts and Sciences will take the brunt of the full-time cuts, losing as much as a third of their faculty. The LI of D Board of Trustees has not vet actëd on the masslve layoff decisión submitted by the University Budget Committee. A closed meeting described by one professoi as "the lïist true conflict on the Board of Trustees." adjöufned last week without any definite results. In response, two of the U of D faculty groups, The American Asso-. ciation of University Professors and the U of D charner of the Michigan Education Association (MLA), have combined witii u group of independent professors in an attempt to fonn one "union". Last Wednesday, the groups lied an app'llcation wilh the National Labor Relations board requesting a collective bargainirig election. It is their hope that througfl then combined efforts, as a new group called the L) of D Faculty Union, they may be able to secure a faculty contract with the university. The cunent system, involving separate contraets'between the University and individuáis, allows Üie faculty no input into University decisions. t best. the contract merely indicates thal the instructor is bound by admifüstrative procedures. Because oL t h is. the University gave the faculty no say-so about the pending [ayoffs, explains Dr. John Watteis of l : of D's Religious Studies program. "We weie simply toid the cuts would come." says Wattexs. "It is the position of the union that financial difficuities shouldn't be resolved by layoffs. If theie is any restructuring in the university, the faculty ought to be involved. even at the lowest level." continuad on page 30 UofD continued trom page 3 "li is the position of the union tliai financiaJ difficulties shouJdn'l be resolved by layoffs. Ifthereisany resuucturing in the univètsity, the facuity oughl to be in volved, even .11 the lo westgevel." According to Dt. Carlton Smith. Assistant Professor of Sociology and Campaign Coördinator fór the U of D branch of MEA, the average faculty member has worked at the University for fifteen years and served a seven-year probationary period - which. coupled with the thirteen years of education he received prior to joining the staff, totals twenty years of education. Ironically, they are now being given about tour days notice. "Many are s highl) specialized in their ;ireas of vork, tliey can't do anything other tlian the kiml of work they are prepared to do in the classtoom," says Smith. lie aira points uit that the majority ol' the professors are between the ages of 50 and 60. The loss of their jobs also nieans the loss of thcir medical ami lite insurance benefits, a loss which could prove vcry critical for some of them who have heart trouble or other ailments. They will Be receiving severance puy. However, at this point. it is not exactly clear how imich. or how long the pay will be allotted h them. Smith discloses that one reason for the University's t"inancial problems is an estimated $4 million coíl overrun school officials foresee as a rcsiilt of the extensivo renovations being made al the School of Law. There is disagreemenl on what the exact COSt of the construction will be, bul estimules on the woik, originally slated to cost $3.9 million, are as high as $7 9 million. Furthermore, rrimors are rite sujigesting a potential V of n exodus trom the city, A professor who asked to reinain anonynious, reveáis that the Universily is alieady aböut the task óf graduaUy uprooting itself from the urban area and movlng oul of the city. "They made a commitment to the city, but now they are trying to shrink her and move her. It's like a wagon train leaving behind the black people and others too poor to make the trip," he said. These charges ure given some credence by the school's rapid decline in enrollmenl trom 9,000 to 8.(100 students between 1972 and 1975-and the skyrocketing 30 per cent tuition increase over the past live years. This faculty source speculates that by raising its tuition and admission requirements. the school is slowly attempting lo "abandon the workinc cIüss students" and redeem its farmer reputation of the '50's as an elite, white. Roman Catholic institution. By the fall of '77, at least two sourees predict that the entire Frélhman class wjll be transferred to Clarkston, Michigan, in Northern Oakland County, 30 miles trom the city - a location quite inaccessible to innefcity youths. And the huge faculty cuts, some contend, may be one giant step in this direction.