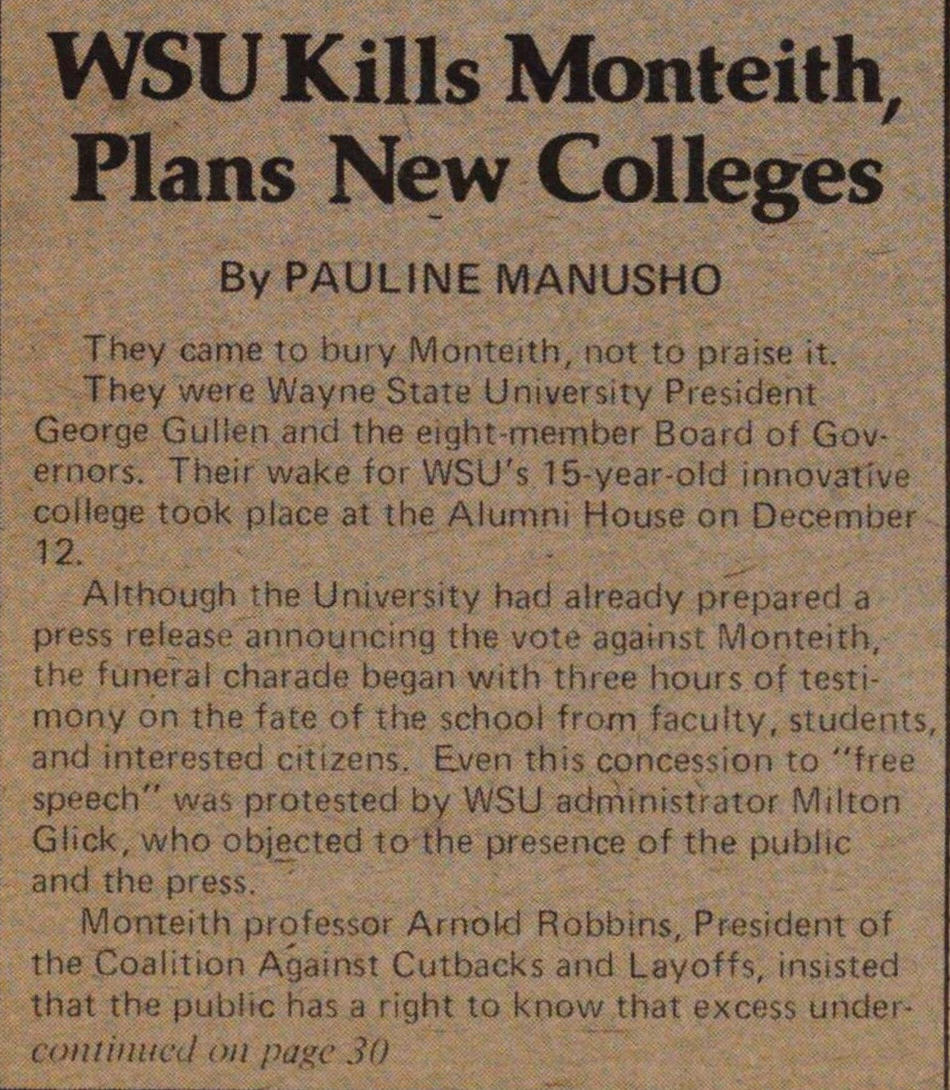 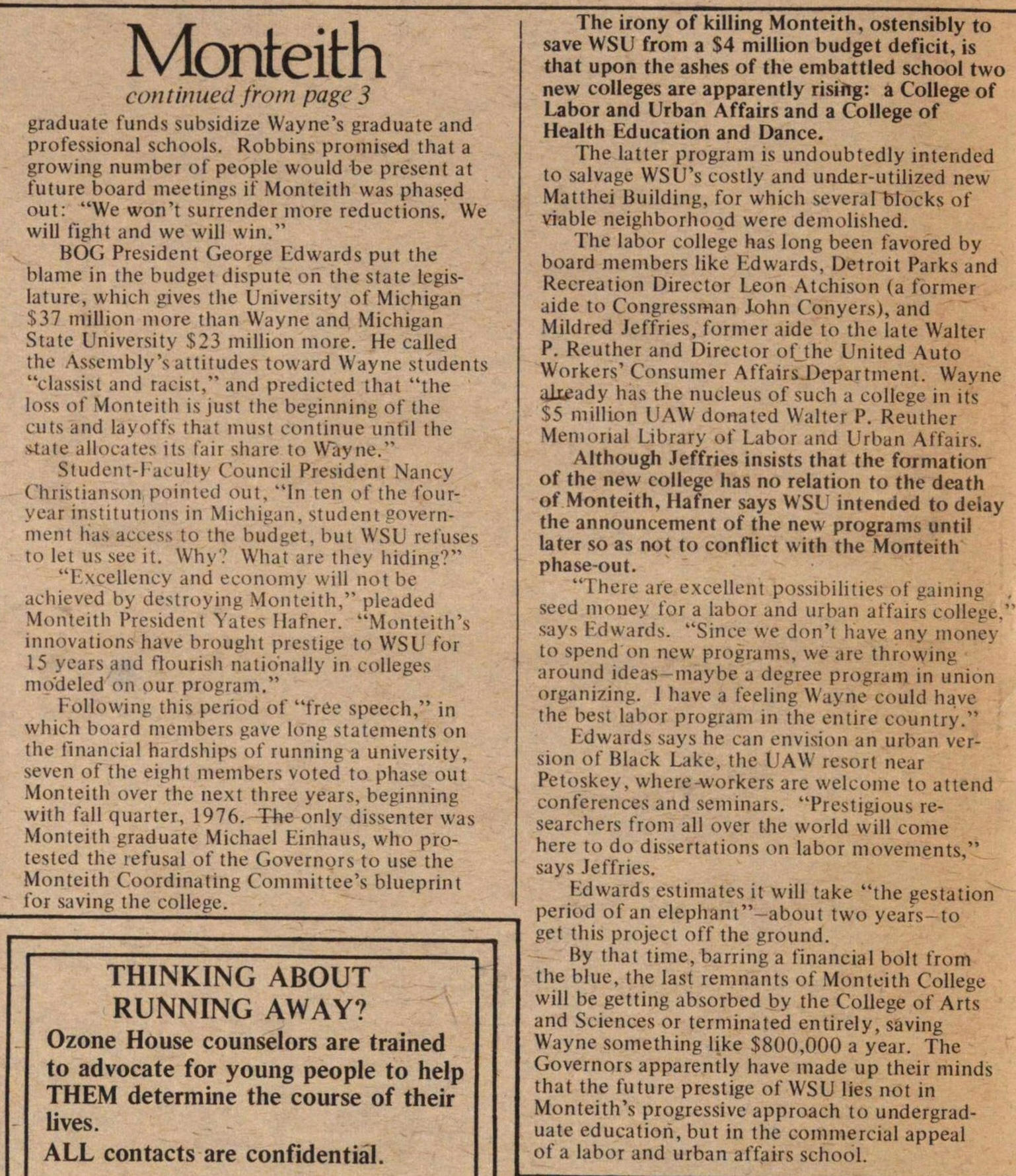 They came to bury Monteith, not to praise it.

They were Wayne State University President George Gullen and the eight-member Board of Governors. Their wake for WSU's 15-year-old innovative college took place at the Alumni House on December 12.          Although the University had already prepared a press release announcing the vote against Monteith, the funeral charade began with three hours of testimony on the fate of the school from faculty, students, and interested citizens. Even this concession to "free speech" was protested by WSU administrator Milton Glick, who objected to the presence of the public and the press.

Monteith professor Arnold Robbins, President of the Coalition Against Cutbacks and Layoffs, insisted that the public has a right to know that excess under

graduate funds subsidize Wayne's graduate and professional schools. Robbins promised that a growing number of people would be present at future board meetings if Monteith was phased out: "We won't surrender more reductions. We will fight and we will win."

BOG President George Edwards put the blame in the budget dispute on the state legislature, which gives the University of Michigan $37 million more than Wayne and Michigan State University $23 million more. He called the Assembly's attitudes toward Wayne students "classist and racist," and predicted that "the loss of Monteith is the beginning of the cuts and layoffs that must continue until the state allocates His fair share to Wayne."

Student-Faculty Council President Nancy Christianson pointed out. "In ten of the four year institutions in Michigan, student government has access to the budget, but WSU refuses to let us see it. Why.' What are they hiding?"

"Excellency and economy will not be achieved by destroying Monteith." pleaded Monteith President Yates Hafner. "Monteith's innovations have brought prestige to WSU for 15 years and flourish nationally in colleges modeled on our program."

Following this period of "free speech," in which board members gave long statements on the financial hardships of running a university, seven of the eight members voted to phase out Monteith over the next three years, beginning with Fall quarter, 1976. The only dissenter was Monteith graduate Michael Einhaus, who protested the refusal of the Governors to use the Monteith Coordinating Committee's blueprint for saving the college.

The irony of killing Monteith, ostensibly to save WSU from a $4 million budget deficit, is that upon the ashes of the embattled school two new colleges are apparently rising: a College of Labor and Urban Affairs and a College of Health Education and Dance.

The latter program is undoubtedly intended to salvage WSU's costly and under-utilized new Matthei Building, for which several blocks of viable neighborhood were demolished.

The labor college has long been favored by board members like Edwards, Detroit Parks and Recreation Director Leon Atchison (a former aide to Congressman John Conyers), and Mildred Jeffries, former aide to the late Walter P. Reuther and Director United Auto Workers' Consumer Affairs Department. Wayne already has the nucleus of such a college in it's $5 million UAW donated Walter P. Reuther Memorial Library of Labor and Urban Affairs.

Although Jeffries insists that the formation of the new college has no relation to the death of Monteith, Hafner says VVSl intended to delay the announcement of the new programs until later so as not to conflict with the Monteith phase-out.

"There are excellent possibilities of gaining seed money for a labor and urban affairs college," says Edwards. "Since we don't have any money to spend on new programs, we are throwing around ideas- maybe a degree program in union organizing. I have a feeling Wayne could have the best labor program in the entire country."

Edwards says he can envision an urban version of Black Lake, the UAW resort near Petoskey, where -workers are welcome to attend conferences and seminars. "Prestigious researchers from all over the world will come here to do dissertations on labor movements," says Jeffries.

Edwards estimates it will take "the gestation period of an about two years to get this project off the ground.

By that time, barring a financial bolt from the blue, the last remnants of Monteith College will be getting absorbed by the College of Arts and Sciences or terminated entirely, saving Wayne something like $800,000 a year. The Governors apparently have made up their minds that the future prestige of WSU lies not in Monteith's progressive approach to undergraduate education, but in the commercial appeal of a labor and urban affairs school.

Thinking About Running Away?

Ozone House counselors are trained to advocate for young people to help THEM determine the course of their lives. ALL contacts are confidential