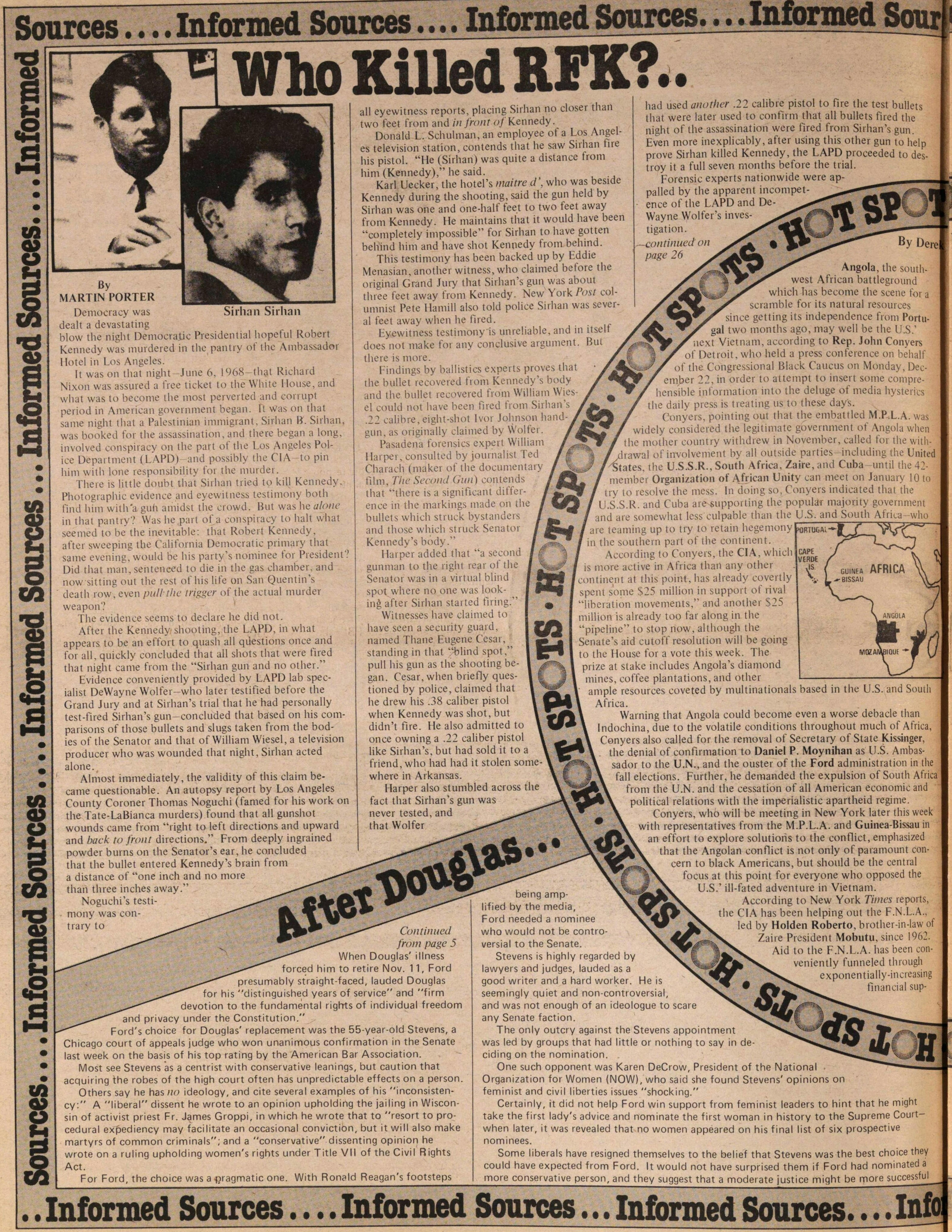 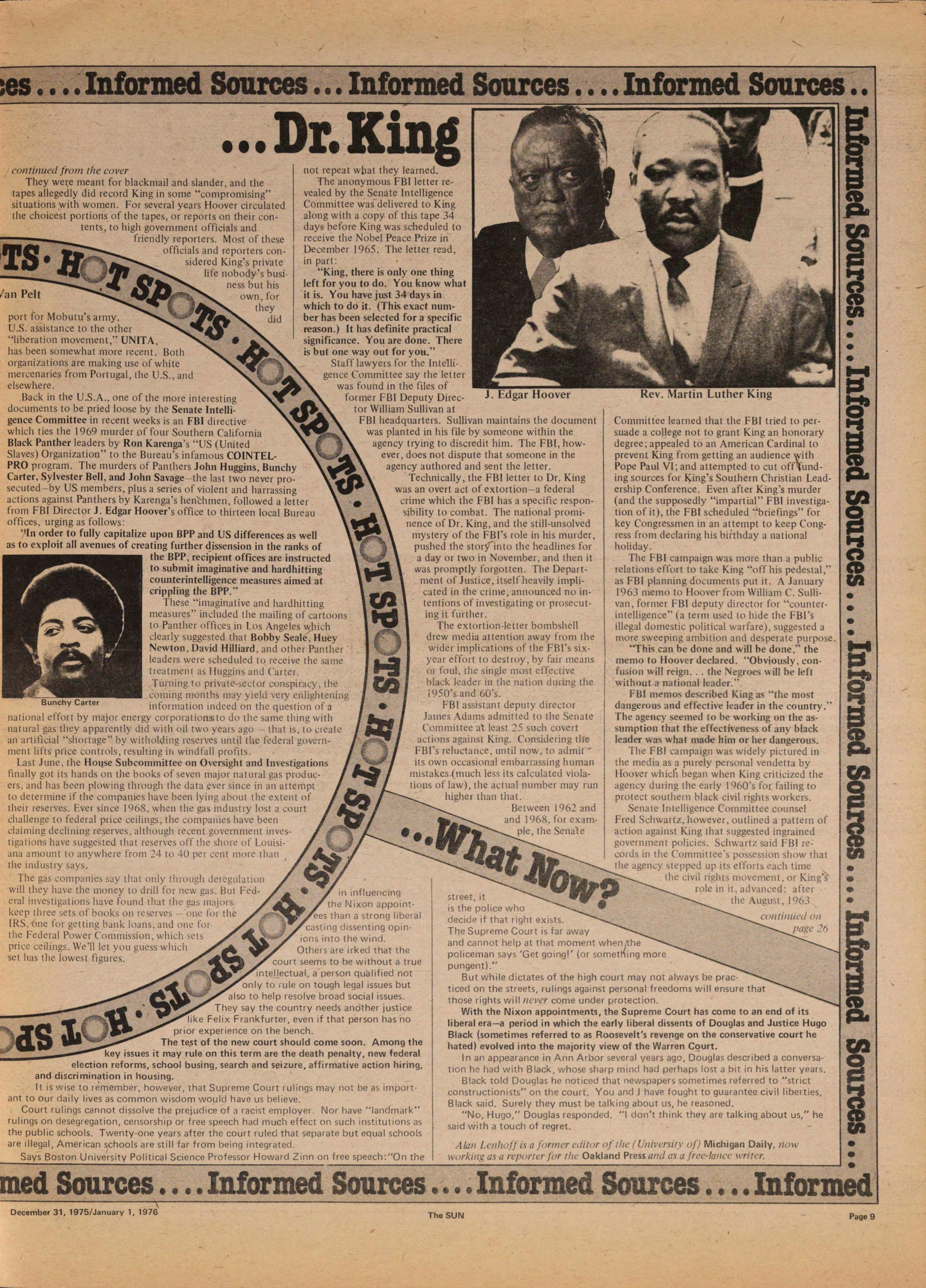 "1 9 &L$ B V6 v - VFt Xí %c Angola, the west Ahïcan battleground which luis become tlie scène tor a imfote for its natural resources tingits independence from Portunths ago, may well be the U.S.' according to Rep. John Conyers ïeld a press conference on helialf al Black Caucus on Mönday,Dec) attempt to insert some hensible inlomiation into the deluge of media hysteiïcs f the daily press is treating us to these days. Conyers, pointing out that the embattled M.R.L.A. was widely considered the legitímate government ot Angola when the moiher country withdrew in November, callea tor llie wiihMlrawal of involvenient by all outside parties including the United States, the U.S.S.R., South África, Zaire, and Cuba until the 42member Organization of African Unity can meet on January 10 to rv to resolve the mess. In doing so, Conyers indicated that the ƒ U.S.S.R. and Cuba are supporting the popular majonty government f and are somewhat [ess culpable iban the U.S. and South Atriia vho I are teammg up to try lo retam negemony f in the southern pari of the continent. According to Conyers, the CIA. whicli is more active in África tlian any otlier .ontinont at this point, has already coverlly Spent somc S25 million in support of rival "ltberátion tnovemeats," and anotlwr $25 million is alreudy too far along in the "pipeline" to stop now, altliougli the Senate's aid cutoff resolution will be going to the House for a vote this week. The prize at stake includes Angola's diamond minf; i-offee nlantations. and other ampie resources coveted by multinationals based in the U.S. and South África. Warning that Angola could become even a worse debacle tiian Indochina, due to the volatile conditions throughout much of África. Conyers also caled for tlie removal of Secretary of State Kissinger, the denial of confirmation to Daniel P. Moynihan as U.S. Ambasi sador to the U.N., and the ouster of the Ford administraron in the fall elections. Further, he demanded the expulsión of South África ffom the U.N. and the cessation of all American economie and jolitical relations witli the imperialistic apartheid regime. Conyers, who will be meeting in New York later this week with representatives from the M.P.L.A. and Guinea-Bissau in l an effort to explore solutioñs to the conflict, emphasized that the Angolan conflict is not only of paramount concern to black Americans, but should be the central focus at this point for everyone who opposed the S.' ill-fated adventure in Vietnam. According to New York Times reportó, the CIA has been helping out the F.N.L.A., k. led by Holden Roberto, brother-in-law of aire President Mobutu, since 1962. Aid to the F.N.L.A. has been con veniently funneled through exponentially-increasing financial support for Mobutu's army. N, U.S. assistance to the other "liberation movement," UNITA, has been somewhat more recent. Both organiations are making use of white mercenaries from Portugal, the U.S., and elsewhere. Back in the U.S.A., one of the more interesting documents to be pried loóse by the Senate Intelligence Committee in recent weeks is an FBI directive whicli ties the 1969 murder of four Southern California Black Panther leaders by Ron Karenga's "US (United Slaves) Urganization to the Bureau s infamous COINTELPRO program. The murders of Panthers John Huggins, Bunchy Carter, Sylvester Bell, and John Savage -the last two never prosecuted-by US members, plus a series of violent and harrassing actions against rantners oy Karenga s henchmen, tollowed a letter f rom FBI Director J. Edgar Hoover's office to thirteen local Bureau offices, urging as follows: "In order to fully capitalize upon BPP and US differences as well as to exploit all avenues of creatina fnrrher iIíwikíhm in the nniv rf íhe BPP, recipiënt offices are instructed to submit imaginative and hardhitting counterintelligence measures aimed at crippling the BPP." These "imaginative and hardhitting measures" included tlie mailing of cartoons to Panther offices in Los Angeles which cleaiiy suggested that Bobby Seale, Huey Newton, David Hilliard. and other Panther leaders vvere scheduled io receive the same treatmen) as I fuggins and Cai tei . Túrning to priva tè-sCctor conspira cy, thé coming months may yield very enüghtening information indeed on the question of a national effort by major encrgy corporationsto do the sanie thing with natural gas tliey apparently dicl with oil two years ago that is, to prea an artificial "sliortage" by witlmlding reserves until tlic federa] govémment lit'ts price controls, resulting in windf'all profits. Last June, the House Subcommittee on Oversight and Investigations finally got its hands on the books of seven major natural gas producers, and has been plowing througfi the data ever since in an atteiiipi to determine if the companies have been lying a bout the extent of i thcir reserves. Ever since 1968, when the gas industry lost a court challenge to federal priee ceilings, the compariies have been clainiing declining reserves, although recent govenimeni investigations liave suggested that reserves off the shore of Louisiana amount to anywhere from 24 to 40 per cent more than ( , the industry says. I lie gas companiès say thal only tlimugli deregülaüon will they havs the money to drill for new gas. Bul Federal investigations have found thal the gas majors J keep three sets of books on reserves one for the I KS. (me for getting bank loans,and one fof the Federal Power C'oinniission. which sets . price ceüings. We 'II let you guess which set has the lowest figures.