Gil Scott-Heron And The Midnight Band 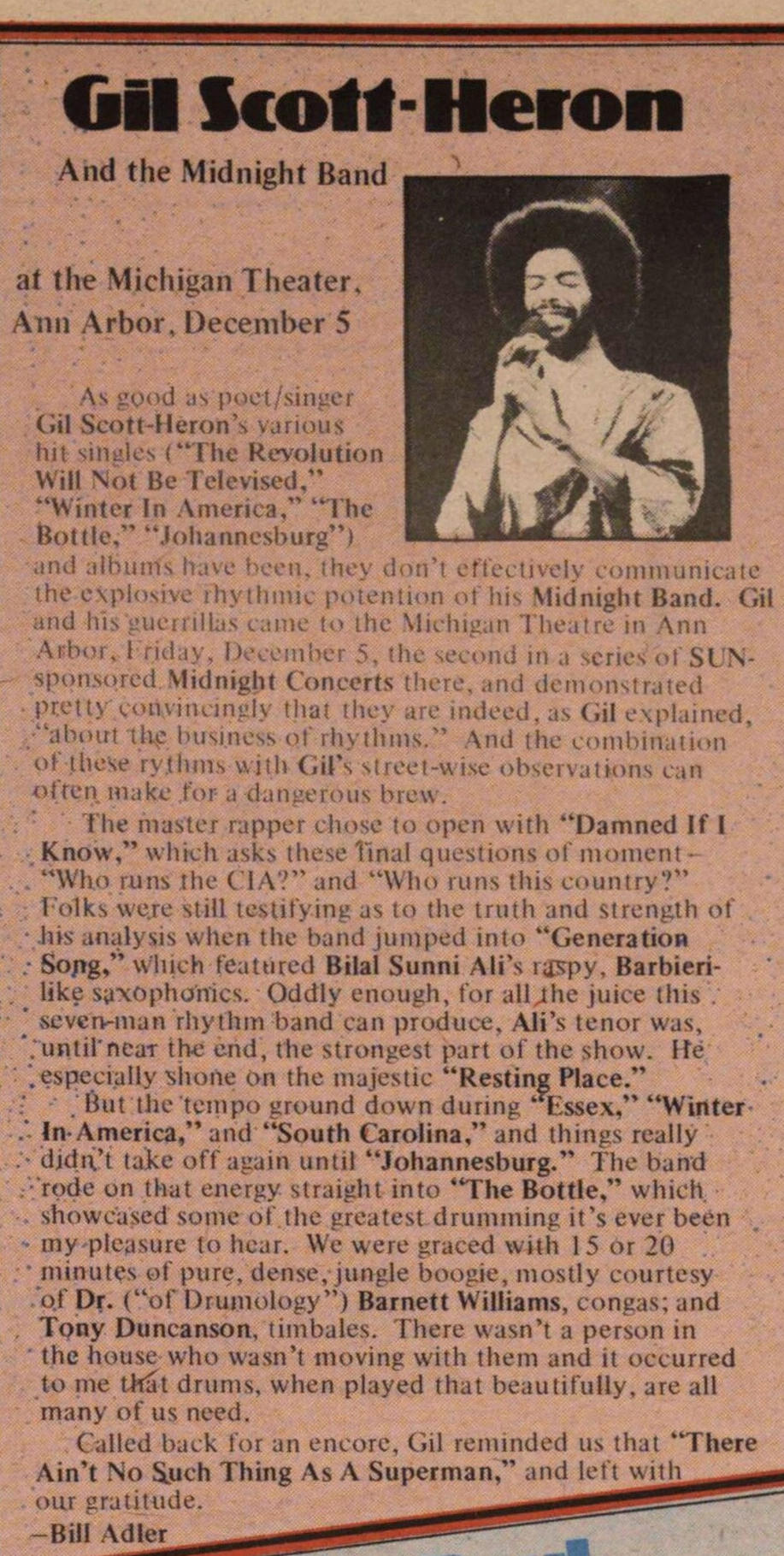 Gil Scott-Heron and the Midnight Band at the Michigan Theater. Ann Arbor, December 5

As good as poet/singer Gil Scott-Heron's various hit singles ("The Revolution Will Not Be Televised." "Winter In America," "The BottIe," "Johannesburg") and albums have been, they don't effectively communicate the explosivo rhythmic potention of his Midnight Band. Gil and his guerrillas carne to the Michigan Theatre in Ann Arbor December 5, the second in a series of SUN-sponsored Midnight Concerts there, and demonstrated pretty convincingly that they are indeed, as Gil explained, "about the business of rhythms." And the combination of these rhythms with Gil's street-wise observations can often make for a dangerous brew.

The master rapper chose to open with "Damned If I Know," which asks these final questions of moment "Who runs the CIA?" and "Who runs this country?" Folks were still testifying as to the truth and strength of his analysis when the band jumped into "Generation Song," which featured Bilal Sunni Ali's rjspy, Barbieri-like saxophonics. Oddly enough, for all the juice this seven-man rhythym band can produce, Ali'.s tenor was, until the end, the strongest part of the show. He.especially shone tn the majestic "Resting Place."

But the tempo around down during "Essex," "Winter in America," and "South Carolina," and things really didn't take off again until "Johannesburg." The band rode on that energy straight into "The Bottle," which showcased some of the greatest drumming it's ever been my pleasure to hear. We were graced witii 15 or 20 minutes of pure, dense, jungle boogie, mostly congas ol Dr. ("of Drumology") Barnett Williams, congas; and Tony Duncanson, timbales. There wasn't a person in the house who wasn't moving with them and it occurred to me that drums, when played that beautifully. are all many of us need.

Called back for an encore, Gil reminded us that "There Ain't No Such Thing As A Superman," and left with our gratitude.