Busing In Detroit: Demascio Goes Through The Motions 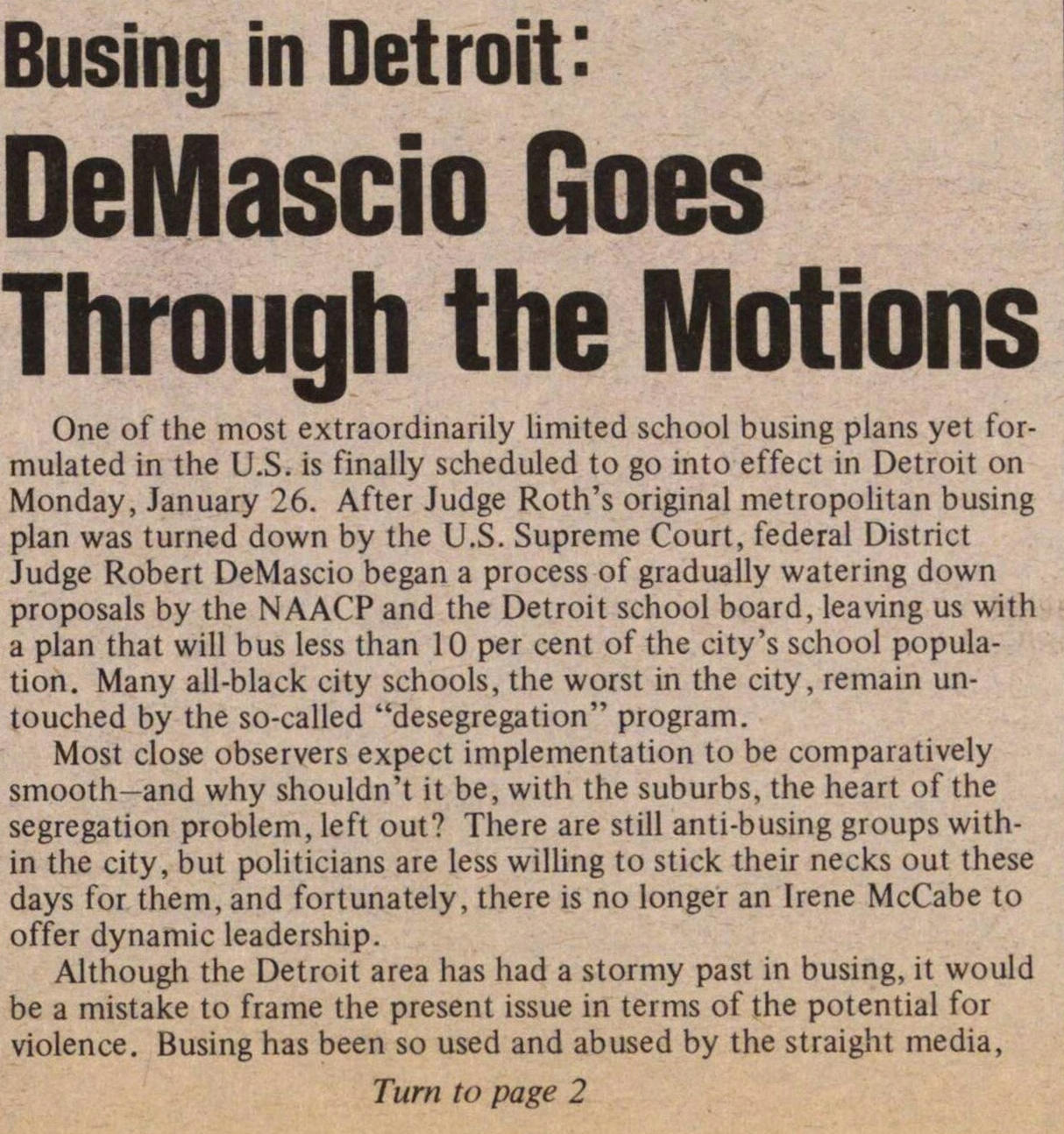 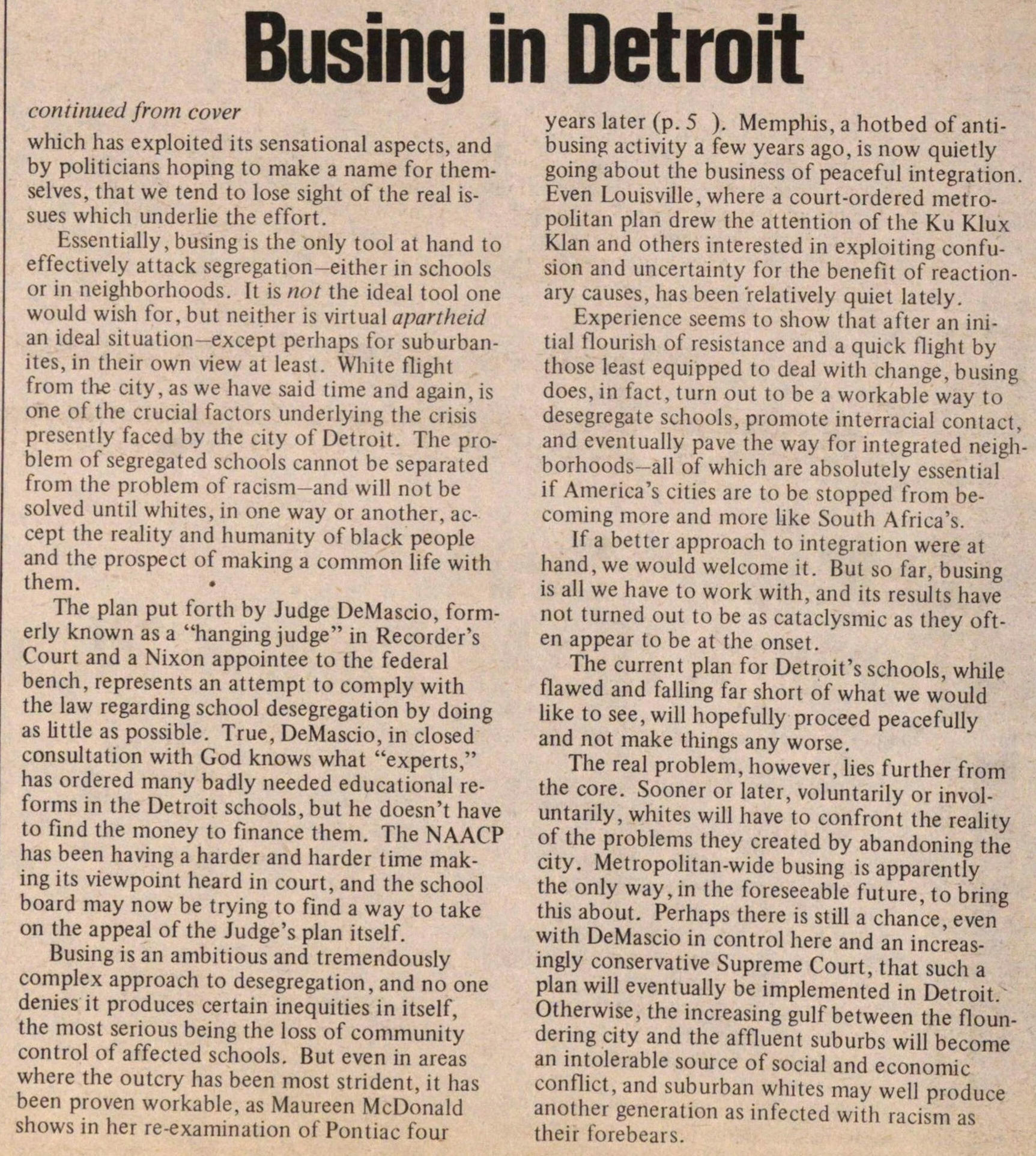 DeMascio Goes Through the Motions

One of the most extraordinarily limited school busing plans yet formulated in the U.S. is finally scheduled to go into effect in Detroit on Monday, January 26. After Judge Roth's original metropolitan busing plan was turned down by the U.S. Supreme Court, federal District Judge Robert DeMascio began a process of gradually watering down proposals by the NAACP and the Detroit school board, leaving us with a plan that will bus less than 10 per cent of the city's school population. Many all-black city schools, the worst in the city, remain untouched by the so-called "desegregation" program.

Most close observers expect implementation to be comparatively smooth – and why shouldn't it be, with the suburbs, the heart of the segregation problem, left out? There are still anti-busing groups within the city, but politicians are less willing to stick their necks out these days for them, and fortunately, there is no longer an Irene McCabe to offer dynamic leadership.

Although the Detroit area has had a stormy past in busing, it would be a mistake to frame the present issue in terms of the potential for violence. Busing has been so used and abused by the straight media,

which has exploited its sensational aspects, and by politicians hoping to make a name for themselves, that we tend to lose sight of the real issues which underlie the effort.

Essentially, busing is the only tool at hand to effectively attack segregation – either in schools or in neighborhoods. It is not the ideal tool one would wish for, but neither is virtual apartheid an ideal situation – except perhaps for suburbanites, in their own view at least. White flight from the city, as we have said time and again, is one of the crucial factors underlying the crisis presently faced by the city of Detroit. The problem of segregated schools cannot be separated from the problem of racism – and will not be solved until whites, in one way or another, accept the reality and humanity of black people and the prospect of making a common life with them.

The plan put forth by Judge DeMascio, formerly known as a "hanging judge" in Recorder's Court and a Nixon appointee to the federal bench, represents an attempt to comply with the law regarding school desegregation by doing as little as possible. True, DeMascio, in closed consultation with God knows what "experts," has ordered many badly needed educational reforms in the Detroit schools, but he doesn't have to find the money to finance them. The NAACP has been having a harder and harder time making its viewpoint heard in court, and the school board may now be trying to find a way to take on the appeal of the Judge's plan itself.

Busing is an ambitious and tremendously complex approach to desegregation, and no one denies it produces certain inequities in itself, the most serious being the loss of community control of affected schools. But even in areas where the outcry has been most strident, it has been proven workable, as Maureen McDonald shows in her re-examination of Pontiac four years later (p.5). Memphis, a hotbed of antibusing activity a few years ago, is now quietly going about the business of peaceful integration. Even Louisville, where a court-ordered metropolitan plan drew the attention of the Ku Klux Klan and others interested in exploiting confusion and uncertainty for the benefit of reactionary causes, has been relatively quiet lately.

Experience seems to show that after an initial flourish of resistance and a quick flight by those least equipped to deal with change, busing does, in fact, turn out to be a workable way to desegregate schools, promote interracial contact, and eventually pave the way for integrated neighborhoods – all of which are absolutely essential if America's cities are to be stopped from becoming more and more like South Africa's.

If a better approach to integration were at hand, we would welcome it. But so far, busing is all we have to work with, and its results have not turned out to be as cataclysmic as they often appear to be at the onset.

The current plan for Detroit's schools, while flawed and falling far short of what we would like to see, will hopefully proceed peacefully and not make things any worse.

The real problem, however, lies further from the core. Sooner or later, voluntarily or involuntarily, whites will have to confront the reality of the problems they created by abandoning the city. Metropolitan-wide busing is apparently the only way, in the foreseeable future, to bring this about. Perhaps there is still a chance, even with DeMascio in control here and an increasingly conservative Supreme Court, that such a plan will eventually be implemented in Detroit. Otherwise, the increasing gulf between the floundering city and the affluent suburbs will become an intolerable source of social and economic conflict, and suburban whites may well produce another generation as infected with racism as their forebears.