Behind Angola: Why The West Wants Africa Back 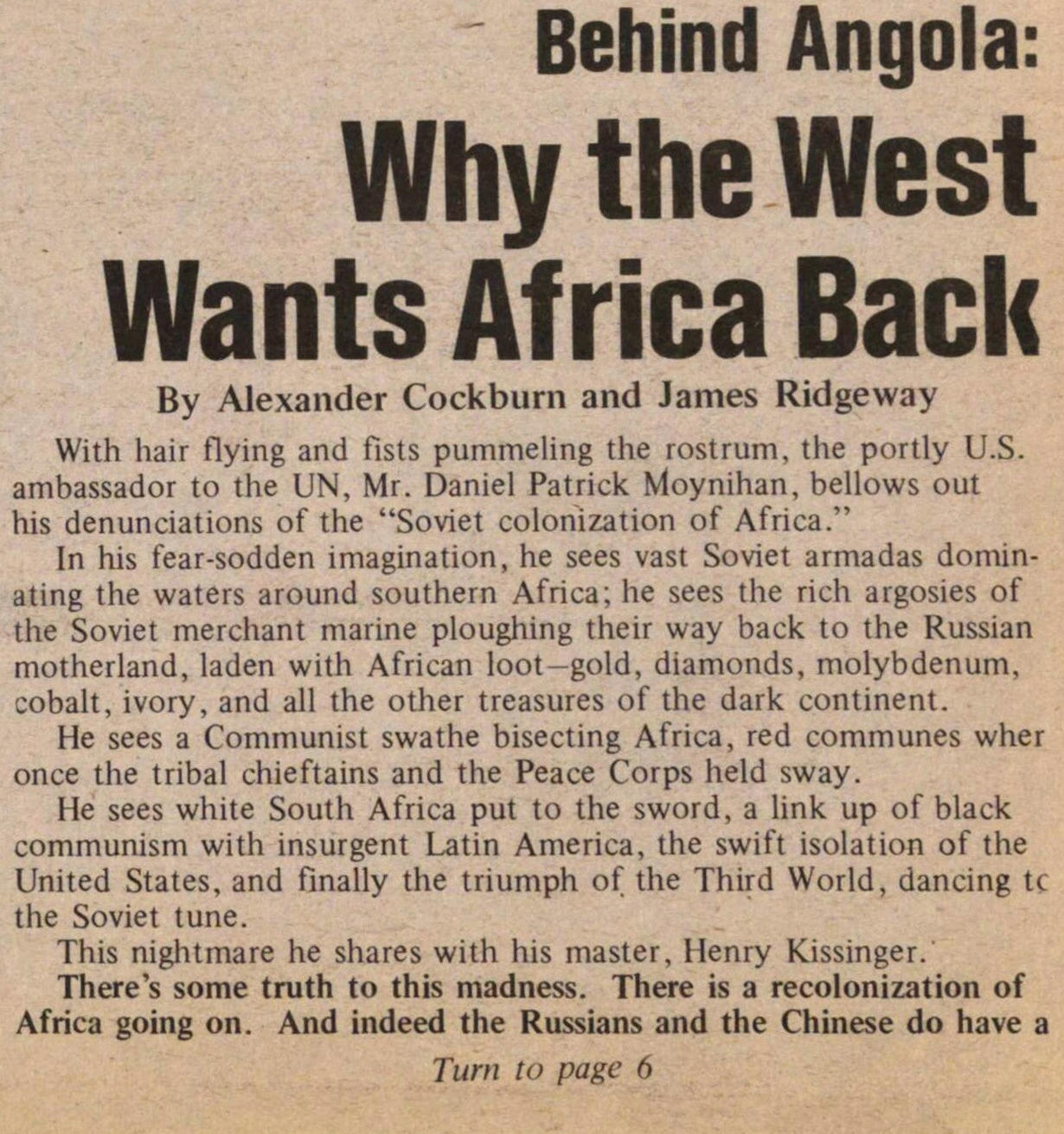 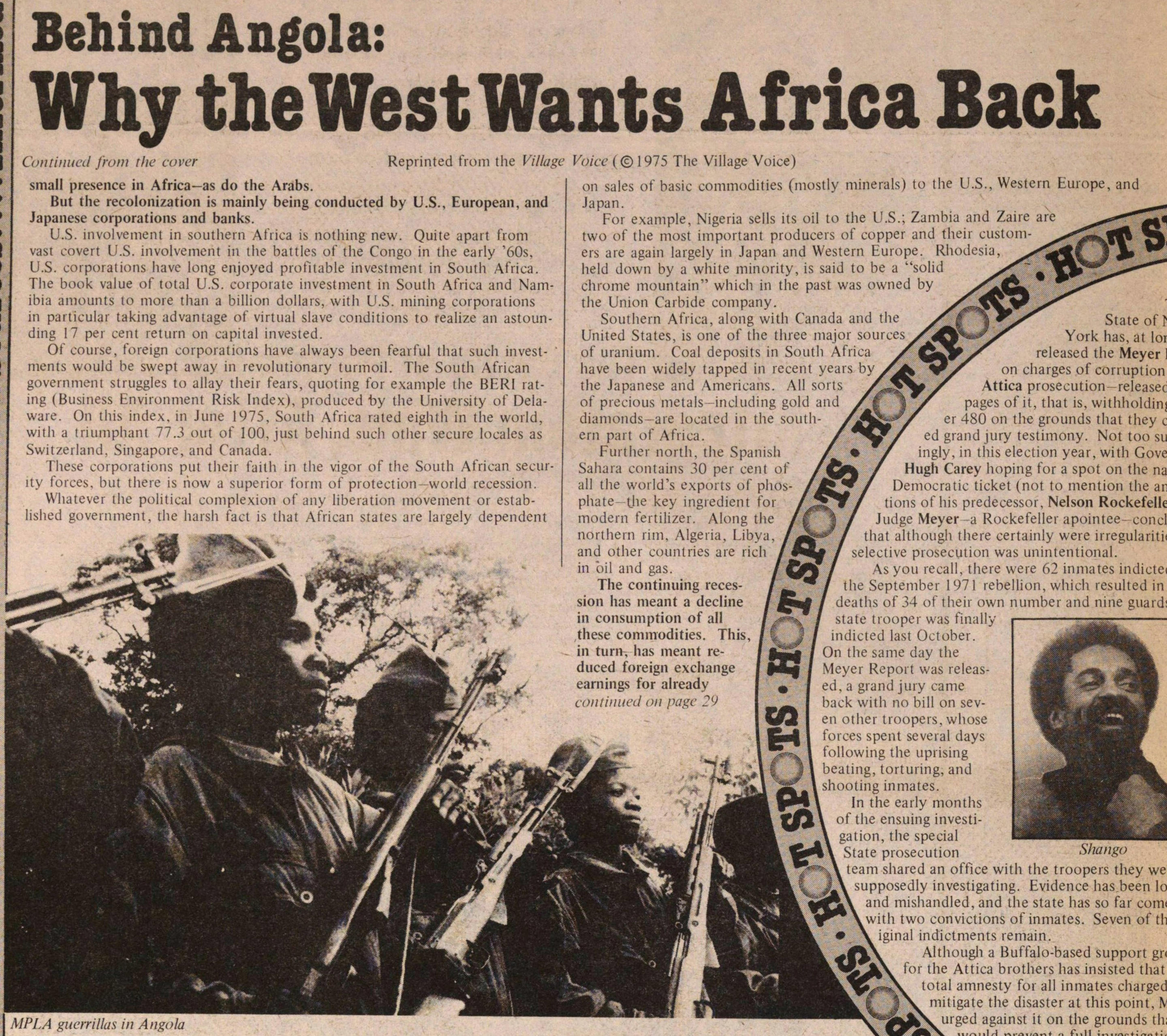 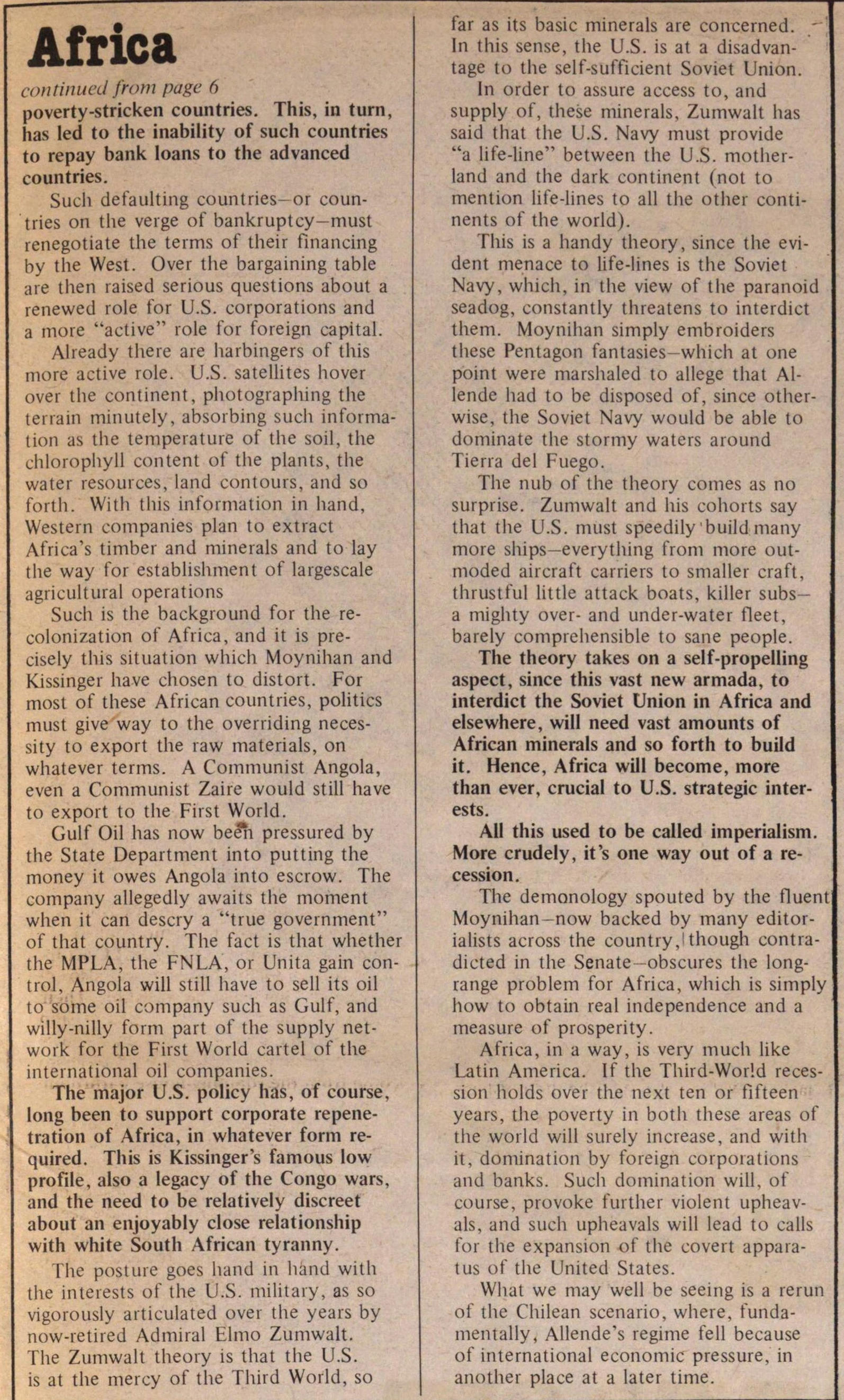 Behind Angola: Why the West Wants Africa Back
By Alexander Cockburn and James Ridgeway

With hair flying and fists pummeling the rostrum, the portly U.S. ambassador to the UN, Mr. Daniel Patrick Moynihan, bellows out his denunciations of the "Soviet colonization of Africa."

In his fear-sodden imagination, he sees vast Soviet armadas dominating the waters around southern Africa; he sees the rich argosies of the Soviet merchant marine ploughing their way back to the Russian motherland, laden with African loot – gold, diamonds, molybdenum, cobalt, ivory, and all the other treasures of the dark continent.

He sees a Communist swathe bisecting Africa, red communes where once the tribal chieftains and the Peace Corps held sway.

He sees white South Africa put to the sword, a link up of black communism with insurgent Latin America, the swift isolation of the United States, and finally the triumph of the Third World, dancing to the Soviet tune.

This nightmare he shares with his master, Henry Kissinger. There's some truth to this madness. There is a recolonization of Africa going on. And indeed the Russians and the Chinese do have a

Continued from the cover

small presence in Africa – as do the Arabs.

But the recolonization is mainly being conducted by U.S., European, and Japanese corporations and banks.

U.S. involvement in southern Africa is nothing new. Quite apart from vast covert U.S. involvement in the battles of the Congo in the early '60s, U.S. corporations have long enjoyed profitable investment in South Africa. The book value of total U.S. corporate investment in South Africa and Namibia amounts to more than a billion dollars, with U.S. mining corporations in particular taking advantage of virtual slave conditions to realize an astounding 17 percent return on capital invested.

Of course, foreign corporations have always been fearful that such investments would be swept away in revolutionary turmoil. The South African government struggles to allay their fears, quoting for example the BERI rating (Business Environment Risk Index), produced by the University of Delaware. On this index, in June 1975, South Africa rated eighth in the world, with a triumphant 77.3 out of 100, just behind such other secure locales as Switzerland, Singapore, and Canada.

These corporations put their faith in the vigor of the South African security forces, but there is now a superior form of protection – world recession.

Whatever the political complexion of any liberation movement or established government, the harsh fact is that African states are largely dependent on sales of basic commodities (mostly minerals) to the U.S., Western Europe, and Japan.

For example, Nigeria sells its oil to the U.S.; Zambia and Zaire are two of the most important producers of copper and their customers are again largely in Japan and Western Europe. Rhodesia, held down by a white minority, is said to be a "solid chrome mountain" which in the past was owned by the Union Carbide company.

Southern Africa, along with Canada and the United States, is one of the three major sources of uranium. Coal deposits in South Africa have been widely tapped in recent years by the Japanese and Americans. All sorts of precious metals – including gold and diamonds – are located in the southern part of Africa.

Further north, the Spanish Sahara contains 30 per cent of all the world's exports of phosphate – the key ingredient for modern fertilizer. Along the northern rim, Algeria, Libya, and other countries are rich in oil and gas.

The continuing recession has meant a decline in consumption of all oƒ these commodities. This, in turn, has meant reduced foreign exchange of earnings for already

poverty-stricken countries. This, in turn, has led to the inability of such countries to repay bank loans to the advanced countries.

Such defaulting countries – or countries on the verge of bankruptcy – must renegotiate the terms of their financing by the West. Over the bargaining table are then raised serious questions about a renewed role for U.S. corporations and a more "active" role for foreign capital.

Already there are harbingers of this more active role. U.S. satellites hover over the continent, photographing the terrain minutely, absorbing such information as the temperature of the soil, the chlorophyll content of the plants, the water resources, land contours, and so forth. With this information in hand, Western companies plan to extract Africa's timber and minerals and to lay the way for establishment of largescale agricultural operations.

Such is the background for the recolonization of Africa, and it is precisely this situation which Moynihan and Kissinger have chosen to distort. For most of these African countries, politics must give way to the overriding necessity to export the raw materials, on whatever terms. A Communist Angola, even a Communist Zaire would still have to export to the First World.

Gulf Oil has now been pressured by the State Department into putting the money it owes Angola into escrow. The company allegedly awaits the moment when it can descry a "true government" of that country. The fact is that whether the MPLA, the FNLA, or Unita gain control, Angola will still have to sell its oil to some oil company such as Gulf, and willy-nilly form part of the supply network for the First World cartel of the international oil companies.

The major U.S. policy has, of course, long been to support corporate repenetration of Africa, in whatever form required. This is Kissinger's famous low profile, also a legacy of the Congo wars, and the need to be relatively discreet about an enjoyably close relationship with white South African tyranny.

The posture goes hand in hand with the interests of the U.S. military, as so vigorously articulated over the years by now-retired Admiral Elmo Zumwalt. The Zumwalt theory is that the U.S. is at the mercy of the Third World, so far as its basic minerals are concerned. In this sense, the U.S. is at a disadvantage to the self-sufficient Soviet Union.

In order to assure access to, and supply of, these minerals, Zumwalt has said that the U.S. Navy must provide "a life-line" between the U.S. motherland and the dark continent (not to mention life-lines to all the other continents of the world).

This is a handy theory, since the evident menace to life-lines is the Soviet Navy, which, in the view of the paranoid seadog, constantly threatens to interdict them. Moynihan simply embroiders these Pentagon fantasies – which at one point were marshaled to allege that Allende had to be disposed of, since otherwise, the Soviet Navy would be able to dominate the stormy waters around Tierra del Fuego.

The nub of the theory comes as no surprise. Zumwalt and his cohorts say that the U.S. must speedily build many more ships – everything from more outmoded aircraft carriers to smaller craft, thrustful little attack boats, killer subs – a mighty over- and under-water fleet, barely comprehensible to sane people.

The theory takes on a self-propelling aspect, since this vast new armada, to interdict the Soviet Union in Africa and elsewhere, will need vast amounts of African minerals and so forth to build it. Hence, Africa will become, more than ever, crucial to U.S. strategic interests.

All this used to be called imperialism. More crudely, it's one way out of a recession.

The demonology spouted by the fluent Moynihan – now backed by many editorialists across the country, though contradicted in the Senate – obscures the long-range problem for Africa, which is simply how to obtain real independence and a measure of prosperity.

Africa, in a way, is very much like Latin America. If the Third-World recession holds over the next ten or fifteen years, the poverty in both these areas of the world will surely increase, and with it, domination by foreign corporations and banks. Such domination will, of course, provoke further violent upheavals, and such upheavals will lead to calls for the expansion of the covert apparatus of the United States.

What we may well be seeing is a rerun of the Chilean scenario, where, fundamentally, Allende's regime fell because of international economic pressure, in another place at a later time.