The Battle Of Pontiac Integration Wins, After All 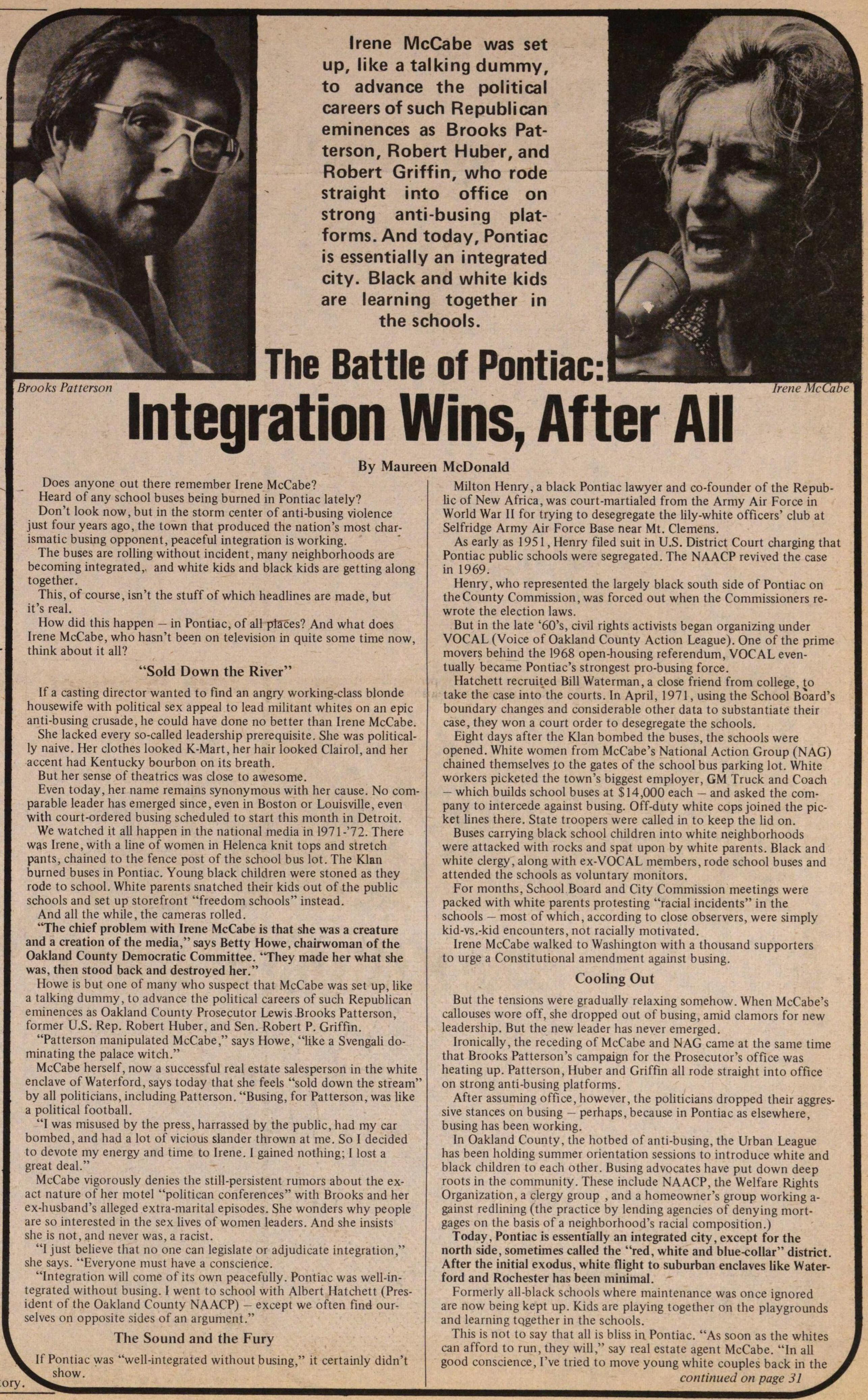 Irene McCabe was set up, like a talking dummy, to advance the political careers of such Republican eminences as Brooks Patterson, Robert Huber, and Robert Griffin, who rode straight int o office on strong anti-busing platforms. And today, Pontiac is essentially an integrated city. Black and white kids are learning together in the schools.

Does anyone out there remember Irene McCabe? Heard of any school buses being burned in Pontiac lately? Don't look now, but in the storm center of anti-busing violence just four years ago, the town that produced the nation's most charismatic busing opponent, peaceful integration is working.

The buses are rolling without incident, many neighborhoods are becoming integrated, and white kids and black kids are getting along together.

This, of course, isn't the stuff of which headlines are made, but it's real.

How did this happen - in Pontiac, of all places? And what does Irene McCabe, who hasn't been on television in quite some time now, think about it all?

"Sold Down the River"

If a casting director wanted to find an angry working-class blonde housewife with political sex appeal to lead militant whites on an epic anti-busing crusade, he could have done no better than Irene McCabe.

She lacked every so-called leadership prerequisite. She was politically naive. Her clothes looked K-Mart, her hair looked Clairol, and her accent had Kentucky bourbon on its breath.

But her sense of theatrics was close to awesome.

Even today, her name remains synonymous with her cause. No comparable leader has emerged since, even in Boston or Louisville, even with court-ordered busing scheduled to start this month in Detroit.

We watched it all happen in the national media in 1971 -'72. There was Irene, with a line of women in Helenca knit tops and stretch pants, chained to the fence post of the school bus lot. The Klan burned buses in Pontiac. Young black children were stoned as they rode to school. White parents snatched their kids out of the public schools and set up storefront "freedom schools" instead. And all the while, the cameras rolled.

"The chief problem with Irene McCabe is that she was a creature and a creation of the media," says Betty Howe, chairwoman of the Oakland County Democratic Committee. 'They made her what she was, then stood back and destroyed her."

Howe is but one of many who suspect that McCabe was set up, like a talking dummy, to advance the political careers of such Republican eminences as Oakland County Prosecutor Lewis Brooks Patterson, former U.S. Rep. Robert Huber, and Sen. Robert P. Griffin.

McCabe herself, now a successful real estate salesperson in the white enclave of Waterford, says today that she feels "sold down the stream" by all politicians, including Patterson. "Busing, for Patterson, was like a political football.

"I was misused by the press, harassed by the public, had my car bombed, and had a lot of vicious slander thrown at me. So I decided to devote my energy and time to Irene. I gained nothing; I lost a great deal."

McCabe vigorously denies the still-persistent rumors about the exact nature of her motel "politican conferences" with Brooks and her ex-husband's alleged extra-marital episodes. She wonders why people are so interested in the sex lives of women leaders. And she insists she is not, and never was, a racist.

"I just believe that no one can legislate or adjudicate integration," she says. "Everyone must have a conscience.

"Integration will come its own peacefully. Pontiac was well-integrated without busing. I went to school with Albert Hatchett (President of the Oakland County NAACP) - except we often fine ourselves on opposite sides of an argument."

The Sound and the Fury

If Pontiac was "well-integrated without busing," it certainly didn't show.

Milton Henry, a black Pontiac lawyer and co-founder of the Republic of New Africa, was court-martialed from the Army Air Force in World War II for trying to desegregate the lily-white officers' club at Selfridge Army Air Force Base near Mt. Clemens.

As early as 1951, Henry filed suit in U.S. District Court charging that Pontiac public schools were segregated. The NAACP revived the case in 1969.

Henry, who represented the largely black south side of Pontiac on the County Commission, was forced out when the Commissioners rewrote the election laws.

Hatchett recruited Bill Waterman, a close friend from college, to take the case into the courts. In April, 1971 , using the School Board's boundary changes and considerable other data to substantiate their case, they won a court order to desegregate the schools.

Eight days after the Klan bombed the buses, the schools were opened. White women from McCabe's National Action Group (NAG) chained themselves to the gates of the school bus parking lot. White workers picketed the town's biggest employer, GM Truck and Coach - which builds school buses at $14,000 each - and asked the company to intercede against busing. Off-duty white cops joined the picket lines there. State troopers were called in to keep the lid on.

Buses carrying black school children into white neighborhoods were attacked with rocks and spat upon by white parents. Black and white clergy , along with ex-VOCAL members, rode school buses and attended the schools as voluntary monitors.

For months, School Board and City Commission meetings were packed with white parents protesting "racial incidents" in the schools - most of which, according to close observers, were simply kid-vs.-kid encounters, not racially motivated.

Irene McCabe walked to Washington with a thousand supporters to urge a Constitutional amendment against busing.

But the tensions were gradually relaxing somehow. When McCabe's callouses wore off, she dropped out of busing, amid clamors for new leadership. But the new leader has never emerged.

Ironically, the receding of McCabe and NAG carne at the same time that Brooks Patterson's campaign for the Prosecutor's office was heating up. Patterson, Huber and Griffin all rode straight into office on strong anti-busing platforms.

After assuming office, however, the politicians dropped their aggressive stances on busing - perhaps, because in Pontiac as elsewhere, busing has been working.

In Oakland County, the hotbed of anti-busing, the Urban League has been holding summer orientation sessions to introduce white and black children to each other. Busing advocates have put down deep roots in the community. These include NAACP, the Welfare Rights Organization, a clergy group , and a homeowner's group working against redlining (the practice by lending agencies of denying mortgages on the basis of a neighborhood's racial composition.)

Today, Pontiac is essentially an integrated city , except for the north side, sometimes called the "red, white and blue-collar" district. After the initial exodus, white flight to suburban enclaves like Waterford and Rochester has been minimal.

Formerly all-black schools where maintenance was once ignored are now being kept up. Kids are playing together on the playgrounds and learning together in the schools. This is not to say that all is bliss in Pontiac. "As soon as the whites  can afford to run, they will," say real estate agent McCabe. "In all good conscience, I've tried to move young white couples back in the  city, where they can get the best buy for their money. But the mortgage companies won't loan money for city housing.

McCabe says she is confident that metropolitan busing will become a reality within two years. "The NAACP is not satisfied with the present plan in Pontiac and Detroit. 1 agree. It's ridiculous to bus a black child from one district to another.

"Only when the affluent children are bused will the change happen. That's when we will see real political clout, perhaps even a Constitutional amendment prohibiting busing."

It seems Irene McCabe is not so naive these days.

She thought she had found her way out of her prefabricated kitchen and lower middle class existence when she jumped on the anti-busing bandwagon with Brooks Patterson.

Little did she know that he was, in fact, the casting director who would use her, and her cause, for all it was worth politically, as he later used the residents of Ferndale in his ill-fated crusade against "obscene" films.

Irene McCabe is a nobody now. And L. Brooks Patterson says he'd like to be President-- "Doesn't every mother's son?"