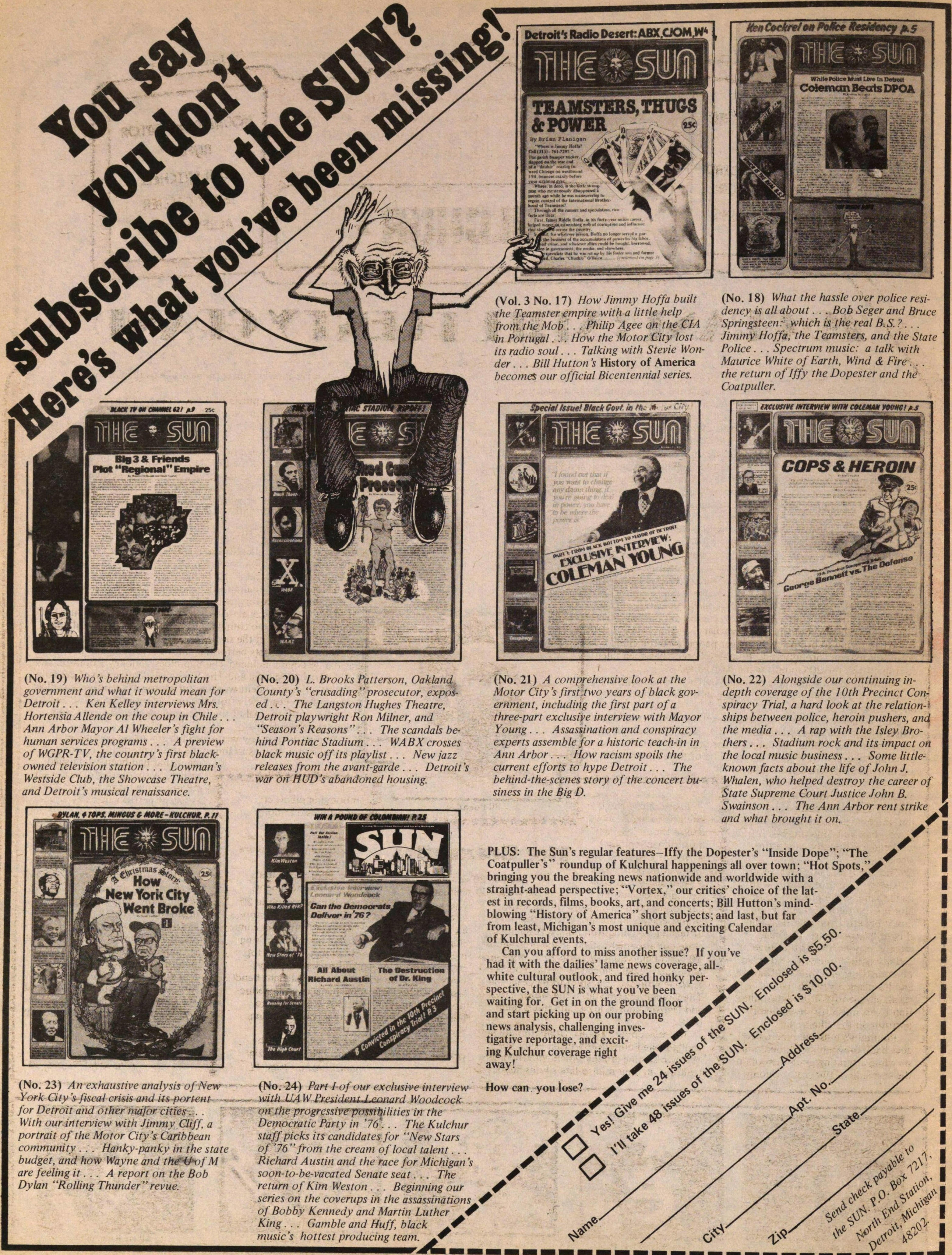 Here’s what you’ve been missing!

(Vol. 3 No. 17) How Jimmy Hoffa built the Teamster empire with a little help from the Mob… Philip Agee on the CIA in Portugal… How the Motor City lost its radio soul… Talking with Stevie Wonder… Bill Hutton’s History of America becomes our official Bicentennial series.

(No. 18) What the hassle over police residency is all about… Bob Seger and Bruce Springsteen: which is the real B.S.?... Jimmy Hoffa, the Teamsters, and the State Police… Spectrum music: a talk with Maurice White of Earth, Wind & Fire… the return of Iffy the Dopester and the Coatpuller.

(No. 21) Motor City ‘s first two years of black government, including the first part of a three-part exclusive interview with Mayor Young... Assassination and conspiracy experts assemble for a historic teach-in in Ann Arbor... How racism spoils the current efforts to hype Detroit... The behind-the-scenes story of the concert business in the Big D.

(No. 22) Alongside our continuing in-depth coverage of the depth coverage of the 10th Precinct Conspiracy Trial, a hard look at the relationships between police, heroin pushers, and  the media... A rap with the Isley Brothers... Stadium rock and its impact on the local music business ... Some little known facts about the life of John J. Whalen, who helped destroy the career of State Supreme Court Justice John B. Swainson... The Ann Arbor rent strike and what brought it on.

(No. 23) An exhaustive analysis of New York City’s fiscal crisis and its portent for Detroit and other major cities... With our interview with Jimmy Cliff, a portrait of the Motor City’s Caribbean community... Hanky-panky in the state budget, and how Wayne and the U of M are feeling it... A report on the Bob Dylan “Rolling Thunder” revue.

(No. 24) Part of our exclusive interview with UAW President Leonard Woodcock & the progressive possibilities in the Democratic Party in ’76… The Kulchur staff picks its candidates for “New Stars of ‘76” from the cream of local talent... Richard Austin and the race for Michigan’s soon-to-be-vacated Senate seat... The return of Kim Weston... Beginning our series on the coverups in the assassinations of Bobby Kennedy and Martin Luther King... Gamble and Huff, black music’s hottest producing team.

PLUS: The Suns regular features – Iffy the Dopester’s “Inside Dope”; “The Coatpuller’s” roundup of Kulchural happenings all over town; “Hot Spots,” bringing you the breaking news nationwide and worldwide with a straight-ahead perspective; “Vortex,” our critics’ choice of the latest records, films, books, art, and concerts; Bill Hutton’s mindblowing “History of America” short subjects; and last, but far from least, Michigan’s most unique and exciting Calendar of Kulchural events.

Can you afford to miss another issue? If you’ve had it with the dailies’ lame news coverage, all-white cultural outlook, and tired honky perspective, the SUN is what you’ve been waiting for. Get in on the ground floor and start picking up on our probing news analysis, challenging investigative reportage, and exciting Kulchur coverage right away!

How can you lose?