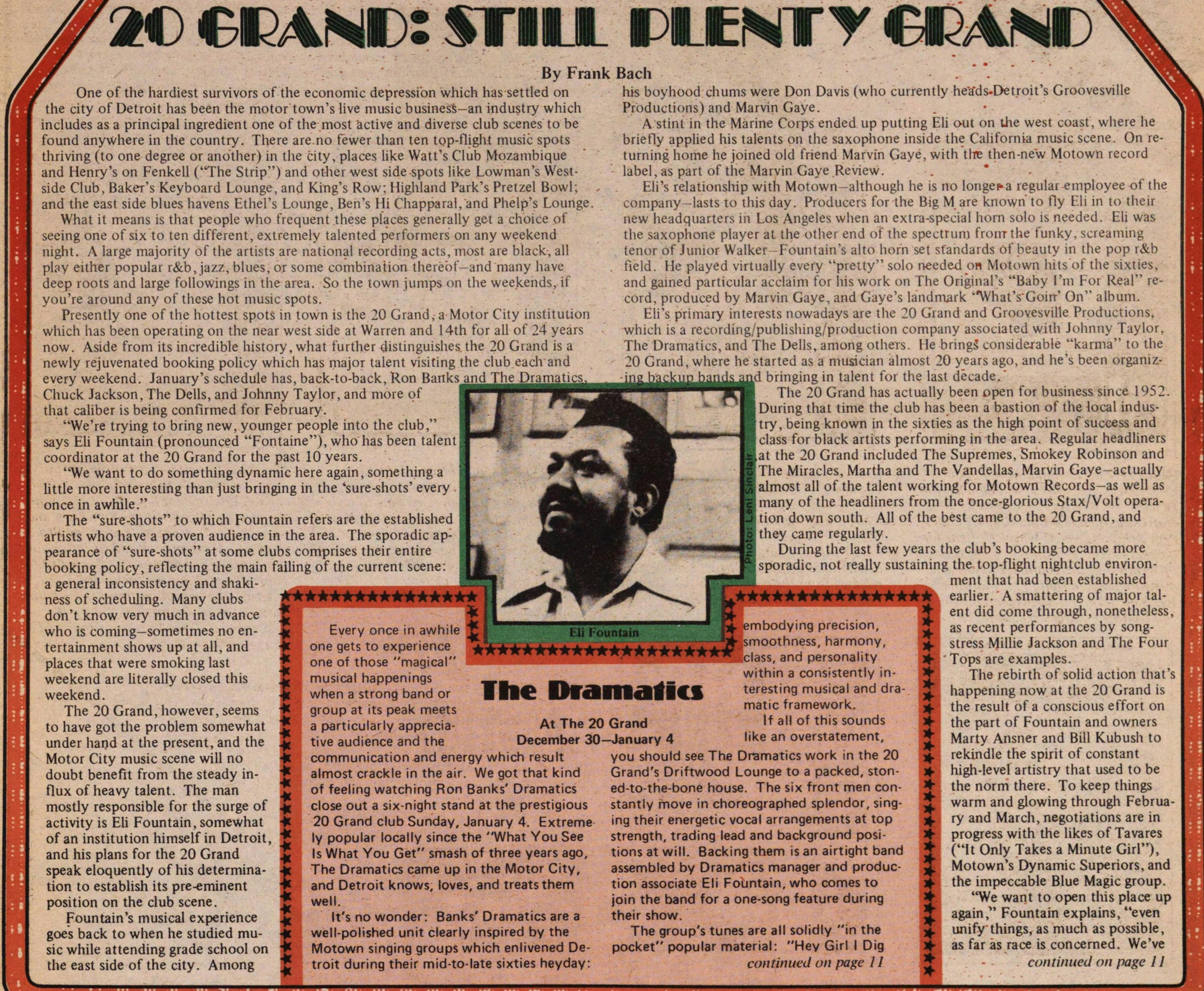 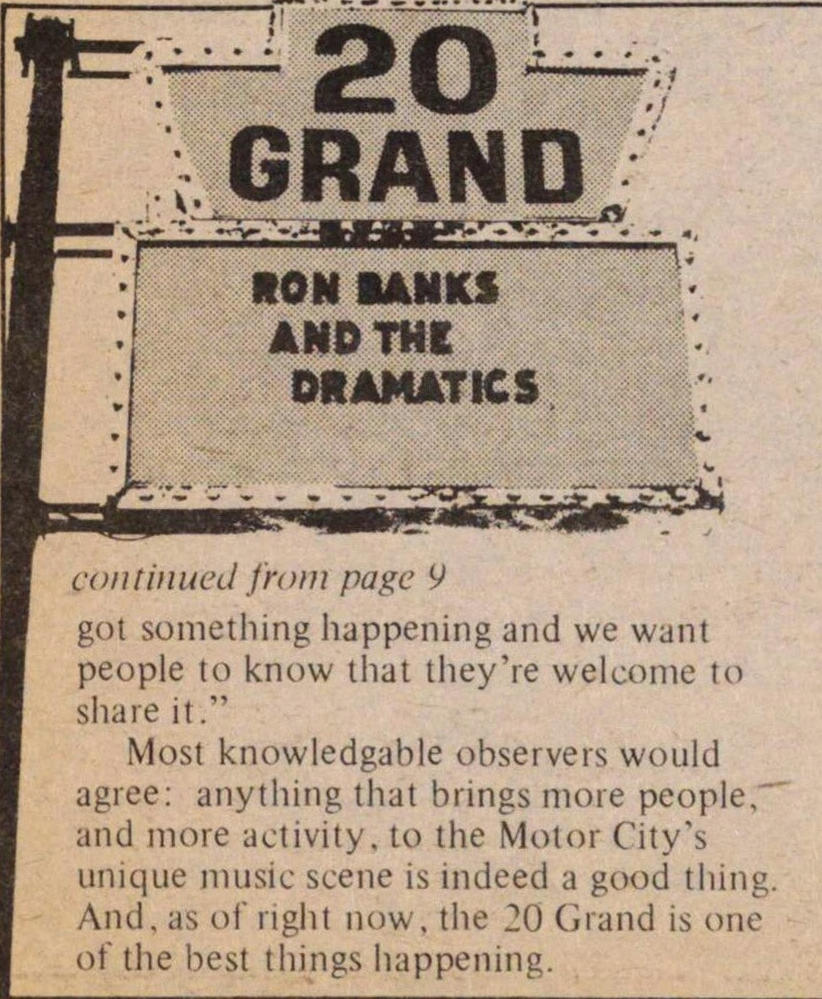 One of the hardiest survivors of the economic depression which has settled on the city of Detroit has been the motor town's live music business – an industry which includes as a principal ingredient one of the most active and diverse club scenes to be found anywhere in the country. There are no fewer than ten top-flight music spots thriving (to one degree or another) in the city, places like Watt's Club Mozambique and Henry's on Fenkell ("The Strip") and other west side spots like Lowman's Westside Club, Baker's Keyboard Lounge, and King's Row; Highland Park's Pretzel Bowl; and the east side blues havens Ethel's Lounge, Ben's Hi Chapparal, and Phelp's Lounge.

What it means is that people who frequent these places generally get a choice of seeing one of six to ten different, extremely talented performers on any weekend night. A large majority of the artists are national recording acts, most are black, all play either popular r&b, jazz, blues, or some combination thereof – and many have deep roots and large followings in the area. So the town jumps on the weekends, if you're around any of these hot music spots.

Presently one of the hottest spots in town is the 20 Grand, a Motor City institution which has been operating on the near west side at Warren and 14th for all of 24 years now. Aside from its incredible history, what further distinguishes the 20 Grand is a newly rejuvenated booking policy which has major talent visiting the club each and every weekend. January's schedule has, back-to-back, Ron Banks and The Dramatics, Chuck Jackson, The Dells, and Johnny Taylor, and more of that caliber is being confirmed for February.

"We're trying to bring new, younger people into the club," says Eli Fountain (pronounced "Fontaine"), who has been talent coordinator at the 20 Grand for the past 10 years.

"We want to do something dynamic here again, something a little more interesting than just bringing in the 'sure-shots' every once in awhile."

The "sure-shots" to which Fountain refers are the established artists who have a proven audience in the area. The sporadic appearance of "sure-shots" at some clubs comprises their entire booking policy, reflecting the main failing of the current scene: a general inconsistency and shakiness of scheduling. Many clubs don't know very much in advance who is coming – sometimes no entertainment shows up at all, and places that were smoking last weekend are literally closed this weekend.

The 20 Grand, however, seems to have got the problem somewhat under hand at the present, and the Motor City music scene will no doubt benefit from the steady influx of heavy talent. The man mostly responsible for the surge of activity is Eli Fountain, somewhat of an institution himself in Detroit, and his plans for the 20 Grand speak eloquently of his determination to establish its pre-eminent position on the club scene.

Fountain's musical experience goes back to when he studied music while attending grade school on the east side of the city. Among his boyhood chums were Don Davis (who currently heads Detroit's Groovesville Productions) and Marvin Gaye.

A stint in the Marine Corps ended up putting Eli out on the west coast, where he briefly applied his talents on the saxophone inside the California music scene. On returning home he joined old friend Marvin Gaye, with the then-new Motown record label, as part of the Marvin Gaye Review.

Eli's relationship with Motown – although he is no longer a regular employee of the company – lasts to this day. Producers for the Big M are known to fly Eli in to their new headquarters in Los Angeles when an extra-special horn solo is needed. Eli was the saxophone player at the other end of the spectrum from the funky, screaming tenor of Junior Walker – Fountain's alto horn set standards of beauty in the pop r&b field. He played virtually every "pretty" solo needed on Motown hits of the sixties, and gained particular acclaim for his work on The Original's "Baby I'm For Real" record, produced by Marvin Gaye and Gaye's landmark "What's Goin' On" album.

Eli's primary interests nowadays are the 20 Grand and Groovesville Productions, which is a recording/publishing/production company associated with Johnny Taylor, The Dramatics, and The Dells, among others. He brings considerable "karma" to the 20 Grand, where he started as a musician almost 20 years ago, and he's been organizing backup bands and bringing in talent for the last decade.

The 20 Grand has actually been open for business since 1952. During that time the club has been a bastion of the local industry, being known in the sixties as the high point of success and class for black artists performing in the area. Regular headliners at the 20 Grand included The Supremes, Smokey Robinson and The Miracles, Martha and The Vandellas, Marvin Gaye – actually almost all of the talent working for Motown Records – as well as many of the headliners from the once-glorious Stax/Volt operation down south. All of the best came to the 20 Grand, and they came regularly.

During the last few years the club 's booking became more sporadic, not really sustaining the top-flight nightclub environment that had been established earlier. A smattering of major talent did come through, nonetheless, as recent performances by songstress Millie Jackson and The Four Tops are examples.

The rebirth of solid action that's happening now at the 20 Grand is the result of a conscious effort on the part of Fountain and owners Marty Ansner and Bill Kubush to rekindle the spirit of constant high-level artistry that used to be the norm there. To keep things warm and glowing through February and March, negotiations are in progress with the likes of Tavares ("It Only Takes a Minute Girl"), Motown's Dynamic Superiors, and the impeccable Blue Magic group.

"We want to open this place up again," Fountain explains, "even unify things, as much as possible, as far as race is concerned. We've

20 GRAND
RON BANKS
AND THE
DRAMATICS

got something happening and we want people to know that they're welcome to share it."

Most knowledgeable observers would agree: anything that brings more people, and more activity, to the Motor City's unique music scene is indeed a good thing. And, as of right now, the 20 Grand is one of the best things happening.