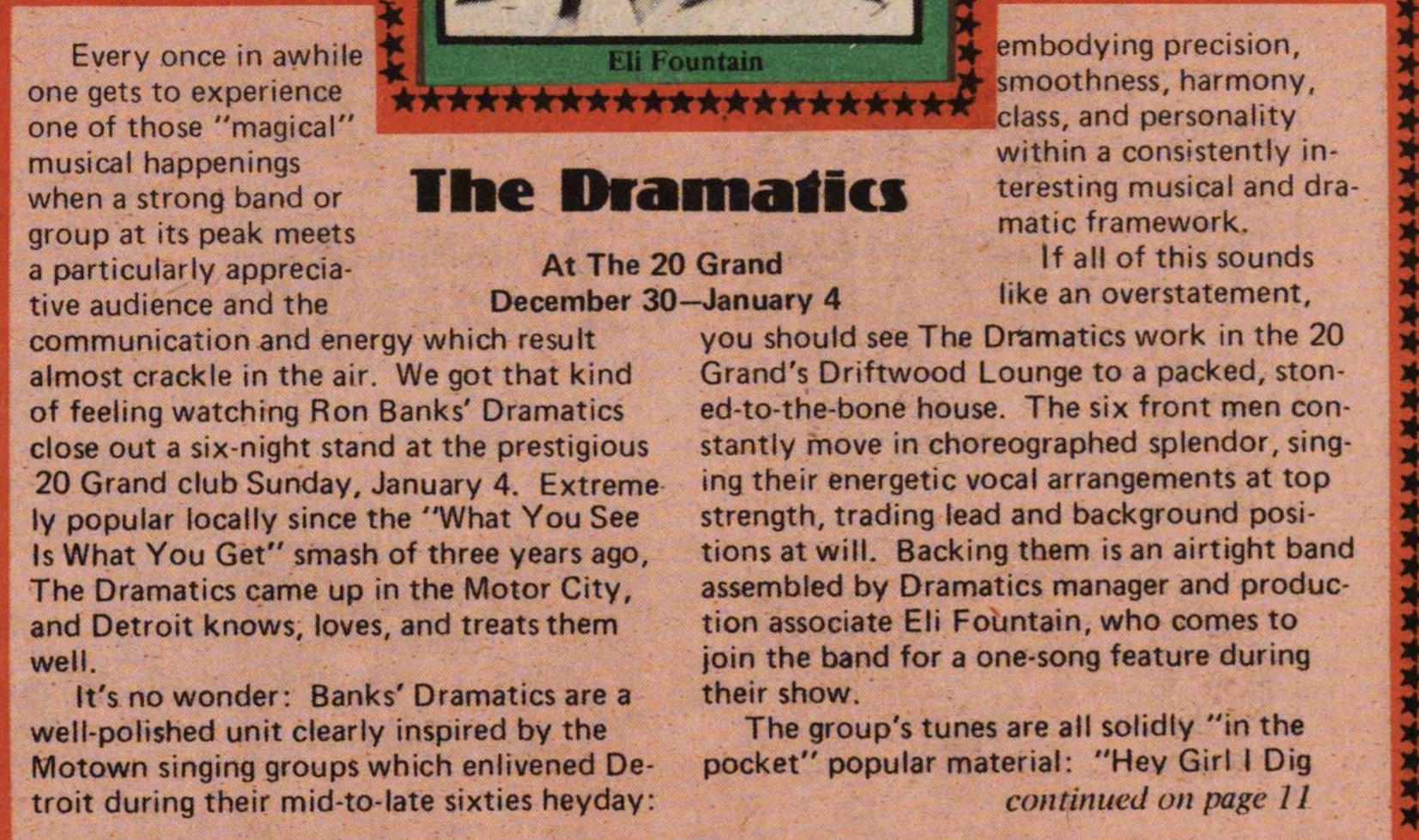 Every once in awhile one gets to experience I one of those "magical" musical happenings  when a strong band or group at its peak meets a particularly appreciative audience and the communication and energy which result almost crackle in the air. We got that kind of feeling watching Ron Banks' Dramatics close out a six-night stand at the prestigious 20 Grand club Sunday, January 4. Extremely popular locally since the "What You See Is What You Get" smash of three years ago, The Dramatics came up in the Motor City, and Detroit knows, loves, and treats them well.

It's no wonder: Banks' Dramatics are a well-polished unit clearly inspired by the Motown singing groups which enlivened Detroit during their mid-to-late sixties heyday: embodying precision, smoothness, harmony, class, and personality within a consistently interesting musical and dramatic framework.

If all of this sounds like an overstatement. you should see The Dramatics work in the 20 Grand's Driftwood Lounge to a packed, packed-to-the-bone house. The six front men constantly move in choreographed splendor, singing their energetic vocal arrangements at top strength, trading lead and background positions at will. Backing them is an airtight band assembled by Dramatics manager and production associate Eli Fountain, who comes to join the band for a one-song feature during their show.

The group's tunes are all solidly "in the pocket" popular material: "Hey Girl I Dig Your Music," from The Dramatics vs. The Dells lp; "Open the Door to Your Heart"; the zodiac/love number "I Ain't Goin' by the Stars in the Sky (l'm Goin' by the Stars in Your Eyes)"; an exquisite "Me and Mrs. Jones"; two from the new Drama V album on ABC Records: "You're Foolin' You" and "The Life of the Party"; "Just Shopping (Not Buying Anything)"; and the closing number "Get Up."

All of the above served to satisfy the folks in attendance to the utmost, as much of the crowd found t impossible to contain squeals and shouts of pure delight throughout the show. Thank you Ron Banks and The Dramatics, and thanks to The 20 Grand for bringing them home once again!