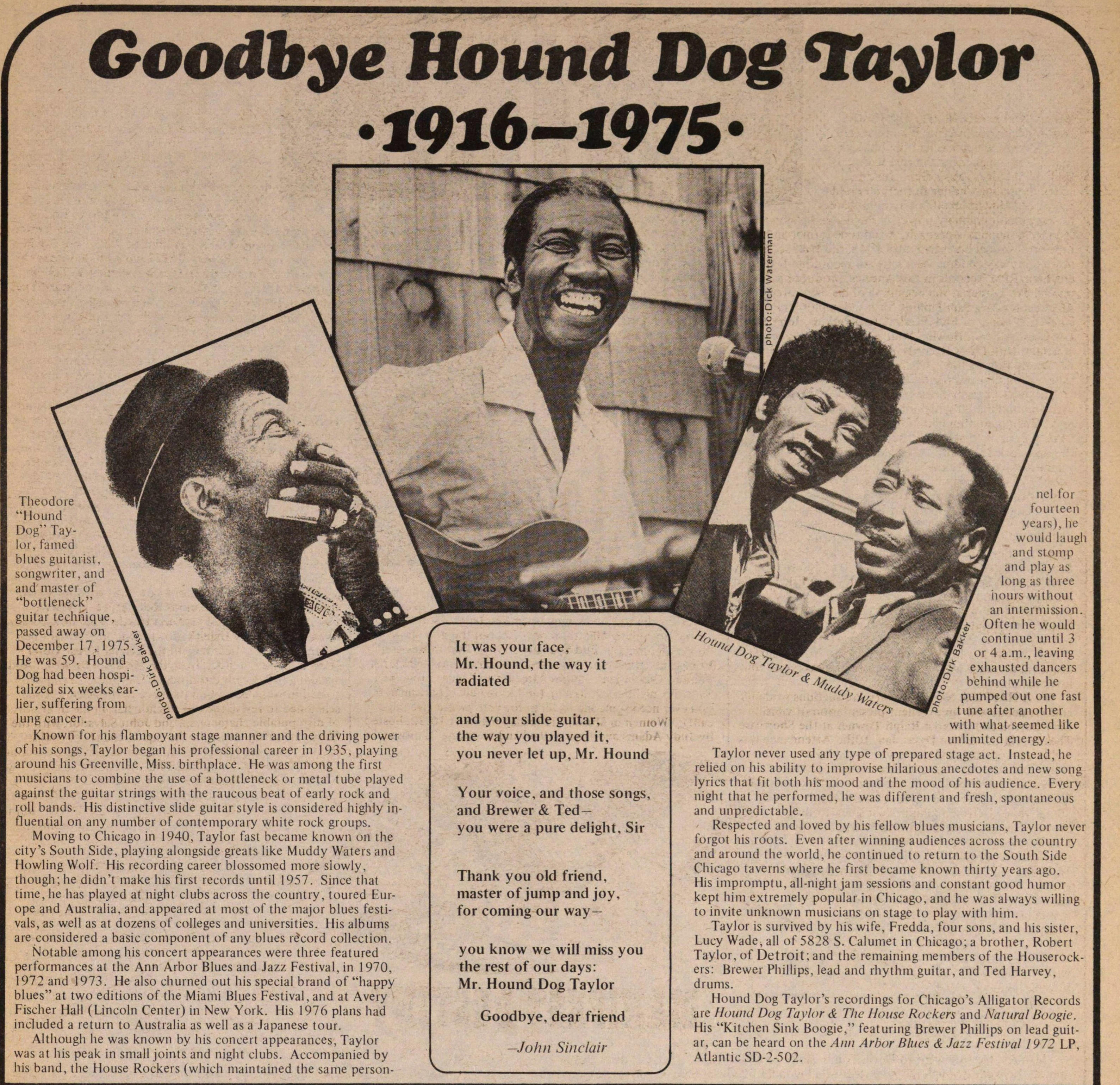 Theodore "Hound Dog" Taylor, famed blues guitarist, songwriter, and and master of "bottleneck" guitar technique, passed away on December 17, 1975. He was 59. Hound Dog had been hospitalized six weeks earlier, suffering from lung cancer.

Known for his flamboyant stage manner and the driving power of his songs, Taylor began his professional career in 1935, playing around his Greenville, Miss. birthplace. He was among the first musicians to combine the use of a bottleneck or metal tube played against the guitar strings with the raucous beat of early rock and roll bands. His distinctive slide guitar style is considered highly influential on any number of contemporary white rock groups.

Moving to Chicago in 1940, Taylor first became known on the city's South Side, playing alongside greats like Muddy Waters and Howling Wolf. His recording career blossomed more slowly though; he didn't make his first records until 1957. Since that time, he has played at night clubs across the country, toured Europe and Australia, and appeared at most of the major blues festivals, as well as at dozens of colleges and universities. His albums are considered a basic component of any blues record collection.

Notable among his concert appearances were three featured performances at the Ann Arbor Blues and Jazz Festival, in 1970, 1972 and 1973. He also churned out his special brand of "happy blues" at two editions of the Miami Blues Festival , and at Avery Fischer Hall (Lincoln Center) in New York. His 1976 plans had included a return to Australia as well as a Japanese tour.

Although he was known by his concert appearances, Taylor was at his peak in small joints and night clubs. Accompanied by his band, the House Rockers (which maintained the same personnel for fourteen years), he would laugh and stomp and play as long as three hours without an intermission. Often he would continue until 3 or 4 am, leaving exhausted dancers behind while he pumped out one fast tune after another with what seemed like unlimited energy.

Taylor never used any type of prepared stage act. Instead, he relied on his ability to improvise hilarious anecdotes and new song lyrics that fit both his mood and the mood of his audience. Every night that he performed, he was different and fresh, spontaneous and unpredictable.

Respected and loved by his fellow blues musicians, Taylor never forgot his roots. Even after winning audiences across the country and around the world, he continued to return to the South Side Chicago taverns where he first became known thirty years ago. His impromptu, all-night jam sessions and constant good humor kept him extremely popular in Chicago, and he was always willing to invite unknown musicians on stage to play with him.

Taylor is survived by his wife, Fredda, four sons, and his sister, Lucy Wade, all of 5828 S. Calumet in Chicago; a brother, Robert Taylor, of Detroit; and the remaining members of the House Rockers: Brewer Phillips, lead and rhythm guitar, and Ted Harvey, drums.

It was your face, Mr. Hound, the way it radiated

and your slide guitar, the way you played it, you never let up, Mr. Hound

Your voice, and those songs, and Brewer & Ted - you were a pure delight, Sir

Thank you old friend, master of jump and joy, for coming our way-

you know we will miss you the rest of our days: Mr. Hound Dog Taylor