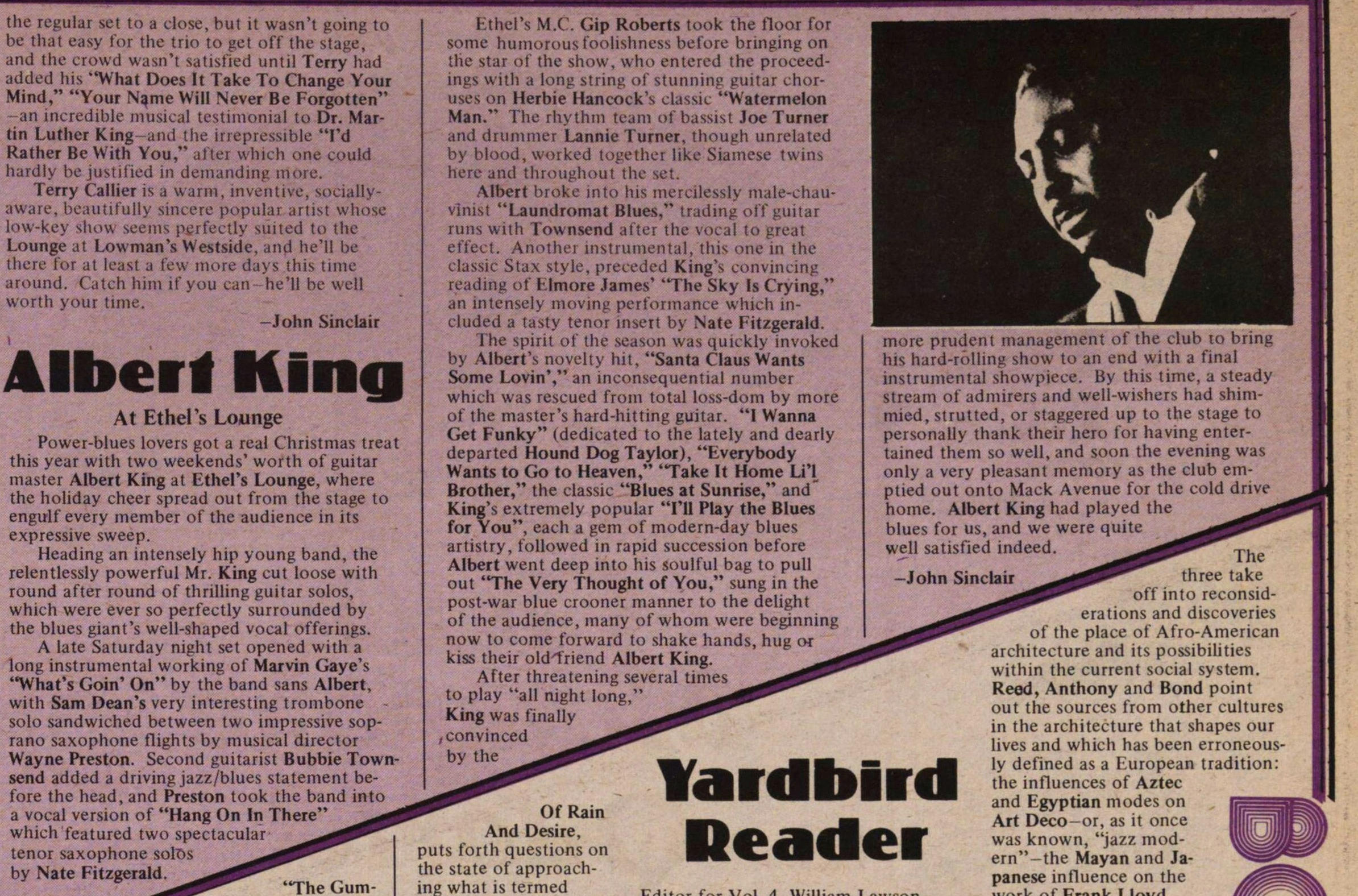 Power-blues lovers got a real Chiistmas treat this year with two weekends' worth of guitar master Albert King at Ethel's Lounge, where the holiday cheer spread out from the stage to engulfevery member of the audience in its expressive sweep. Heading an intensely hip young band, the relentlessly powerful Mr. King cut ioose with round after round of' thrilling guitar solos, which were ever so perfectly surrounded by the blues giant's well-shaped vocal offerings. A late Saturday night set opened with a long instrumental working of Marvin Gaye's "What's Goin' On" by the band sans Albert, with Sam Dean's very interesting trombone solo sandwiched between two impressive soprano saxophone flights by musical director Wayne Preston. Second guitarist Bubbie Townsend added a driving jazzblues statement before the head, and Preston took the band into a vocal version of "Hane On In There" -P which featured two spectacular tenor saxophone sofös -■ by Nate Fitzgerald. Ethel's M.C'. Gip Roberts took the Hoor for some humotous foolishness before bringing on the star of the show, who entered the proceedings with a lonp string of stunning guitai choruses on Herbie Hancock's classic "Watermelon Man." The rhythni team of bassist Joe Turner and drummer Lannie Turner, though unrelated by blond, woiked togetbei like Siamese twins here and throughoul the set. Alhert brokc into Ilis mercilessly male-chauvimst "Laundromat Blues," trading off guitai runs with Townsend alter the vocal O great effect. Anothei instrumental, this one in the classic Stax Style, preceded King's convincing reading of Hlmore James' "The Sky Is Crying," an intensely moving performance which ïncluded a tasty tenor insert by Nate Fitzgerald. The spirit of the season was quickly invoked by Albert's novelty hit, "Santa Claus Wants Some Lovin'," an inconsequentiaJ number which was reseued from total loss-dom by more of the master's hard-hitting guitar. "I Wanna Get Funky" (dedicated to the lately and dearly departed Hound Dog Taylor), "Everybody Wants to Go to Heaven," "Take It Home Li'l Brother," the classic "Blues at Sunrise," and" King's extremely popular 'Til Play the Blues for You", each a geni of modern-day blues artistry, followed in rapid succession before Albert went deep into his soulful bag to pull out "The Very Thought of You," sung in the post-war blue crooner manner to the delight of the audience, many of whom were beginning now to come forward to shake hands, hug 01 kiss their oldfriend Albert King. AFter threatening several times to play "all night long," _ King was finally , convinced by the more prudent management of the club to bring lus hard-roliing show to an end with a final I instrumenta! showpiece. By this time, a steady Btream of admirers and well-wishers had shimmied, strutted, or staggered up to the stage to personally thank their hero for ha ving entertained them so well, and soon the evening was only a very pleasant memory as the club emptied out onto Mack Avenue for the cold drive jk home. Albert King had played the blues for us, and we were quite well satisfied indeed.