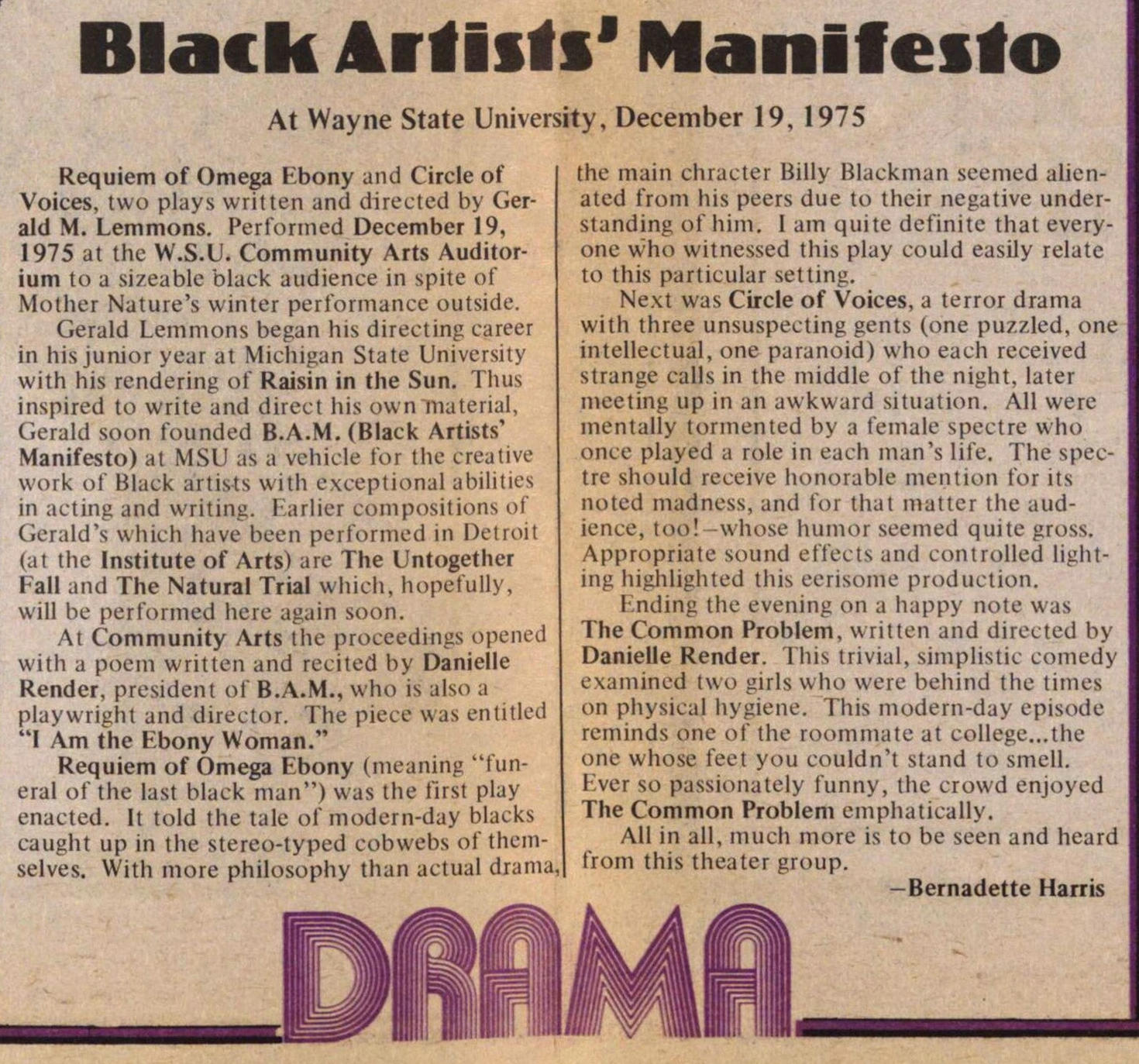 Requiem of Omega Ebony and Circle of Voices, two plays written and directed by Gerald M. Lemmons. Performed December 19, 1975 at the W.S.U. Community Arts Auditorium to a sizeable black audience in spite of Mother Nature's winter performance outside. Gerald Lemmons began his directing career in his junior year at Michigan State University with his rendering of Raisin in the Sun. Thus inspired to write and direct his own material, (lerald soon founded B.A.M. (Black Artists' Manifestó) at MSI! as a vehicle fot the crea live work ot' Black artisls with exceptional abilities in acting and writing. l-.arlicr compositions ol Gerald 's which have boon performed in Detroit (at the Institute of Arts) are The Untogether Fall and The Natural Trial which, hopefully, will be performed hero again soon. At Community Arts the proceedkigs opened with a poem written and reciled by Danielle Render, president ol' B.A.M., who is also a playwright and director. The piece was entitled "I Am the Ebony Woman." Requiem of Omega Ebony (meaning "funeral of the last black man") was the first play enacted. It told the tale of modern-day blacks caught up in the stereo-typed cobwebs of theinselves. With more philosophy than actual drama, the main cluacter Billy Blackman seemed alienated trom his peeis tlue to thcir negative understanding of hhn. I ain quite definite that everyonc who witnessed this play could easily relate to this particular setting. Next was Circle of Voices, a terror drama with three unsuspecting gents (one puzzled, one intellectual, one paranoid) who each received strange calis in the middle of the night, later meeting up in an awkward situation. All were mentally tormén ted by a témale spectre who once played a role in each man 's lite. The spectre should receive honorable mention for its noted madness, and tor that matter the audience, too! whose humor seemed quite gross, Appropriate sound effectsand controlled lighting highlighted this eerisome production. Ending the everüng on a happy note was The Common Problem, written and directed by Danielle Render. This trivial, simplista comedy examinad two girls who were behind the times on physical hygiëne. This modern-day episode reminds one of the roommate at college... the one whose fect you couldn't stand to smell. Kver so passionately funny, the crowd enjoyed The Common Probleni emphatically. All in all, much more is to be seen and heard trom this theater group.