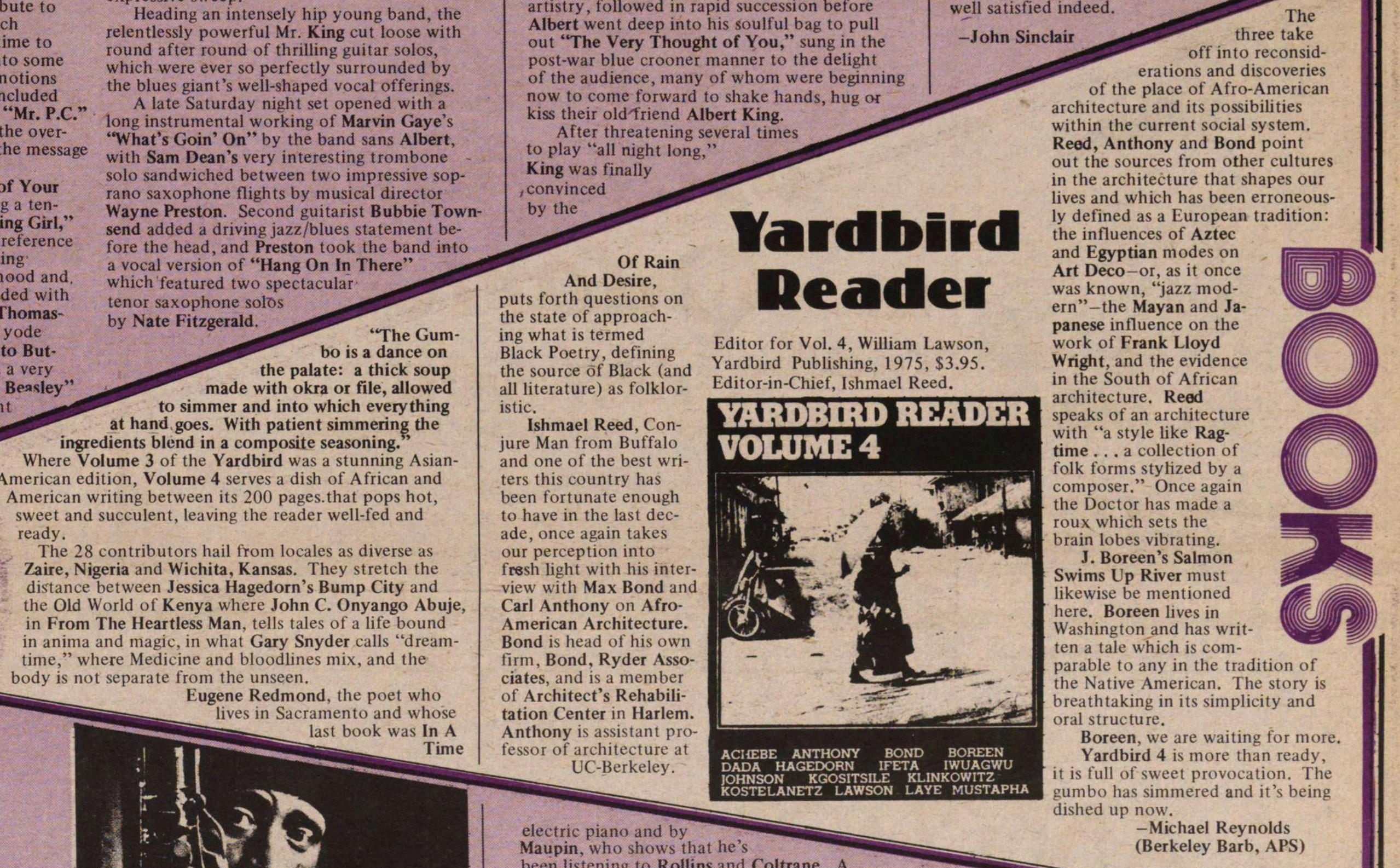 "The Gumbo is a dance on the palate: a thick soup made with okra or file, allowed to simmer and into which everything at hand goes. With patient simmering the ingredients blend in a composite seasoning. Where Volume 3 of the Yardbird was a stunning Asian-American edition, Volume 4 serves a dish of African and American writing between its 200 pages that pops hot, sweet and succulent, leaving the reader well-fed and ready.

The 28 contributors hail from locales as diverse as Zaire, Nigeria and Wichita, Kansas. They stretch the distance between Jessica Hagedorn's Bump City and the Old World of Kenya where John C. Onyango Abuje, in From The Heartless Man, tells tales of a life bound in anima and magic, in what Gary Snyder calls "dreamtime," where Medicine and bloodlines mix, and the body is not separate from the unseen.

Eugene Redmond, the poet who lives in Sacramento and whose last book was In A Time Of Rain And Desire, puts forth questions on the state of approaching what is termed Black Poetry, defining the source of Black (and all literature) as folkloristic.

Ishmael Reed, Conjure Man from Buffalo and one of the best writers this country has been fortunate enough to have in the last decade, once again takes our perception into fresh light with his interview with Max Bond and Carl Anthony on Afro-American Architecture. Bond is head o! his own firm, Bond, Ryder Associates, and is a member of Architect's Rehabilitation Center in Harlem. Anthony is assistant professor of architecture at UC-Berkeley.

The three take off into reconsiderations and discoveries of the place of Afro-American architecture and its possibilities within the current social system. Reed, Anthony and Bond point out the sources from other cultures in the architecture that shapes our lives and which has been erroneously defined as a European tradition: the influences of Aztec and Egyptian modes on Art Deco - or, as it once was known, "jazz modern" - the Mayan and Japanese influence on the work of Frank Lloyd Wright, and the evidence in the South of African architecture. Reed speaks of an architecture with "a style like Ragtime...a collection of folk forms stylized by a composer." Once again the Doctor has made a roux which sets the brain lobes vibrating.

J. Boreen's Salmon Swims Up River must likewise be mentioned here. Boreen lives in Washington and has written a tale which is parable to any in the tradition of the Native American. The story is breathtaking in its simplicity and oral structure.

Boreen, we are waiting for more.

Yardbird 4 is more than ready, it is full of sweet provocation. The gumbo has simmered and it's being dished up now.