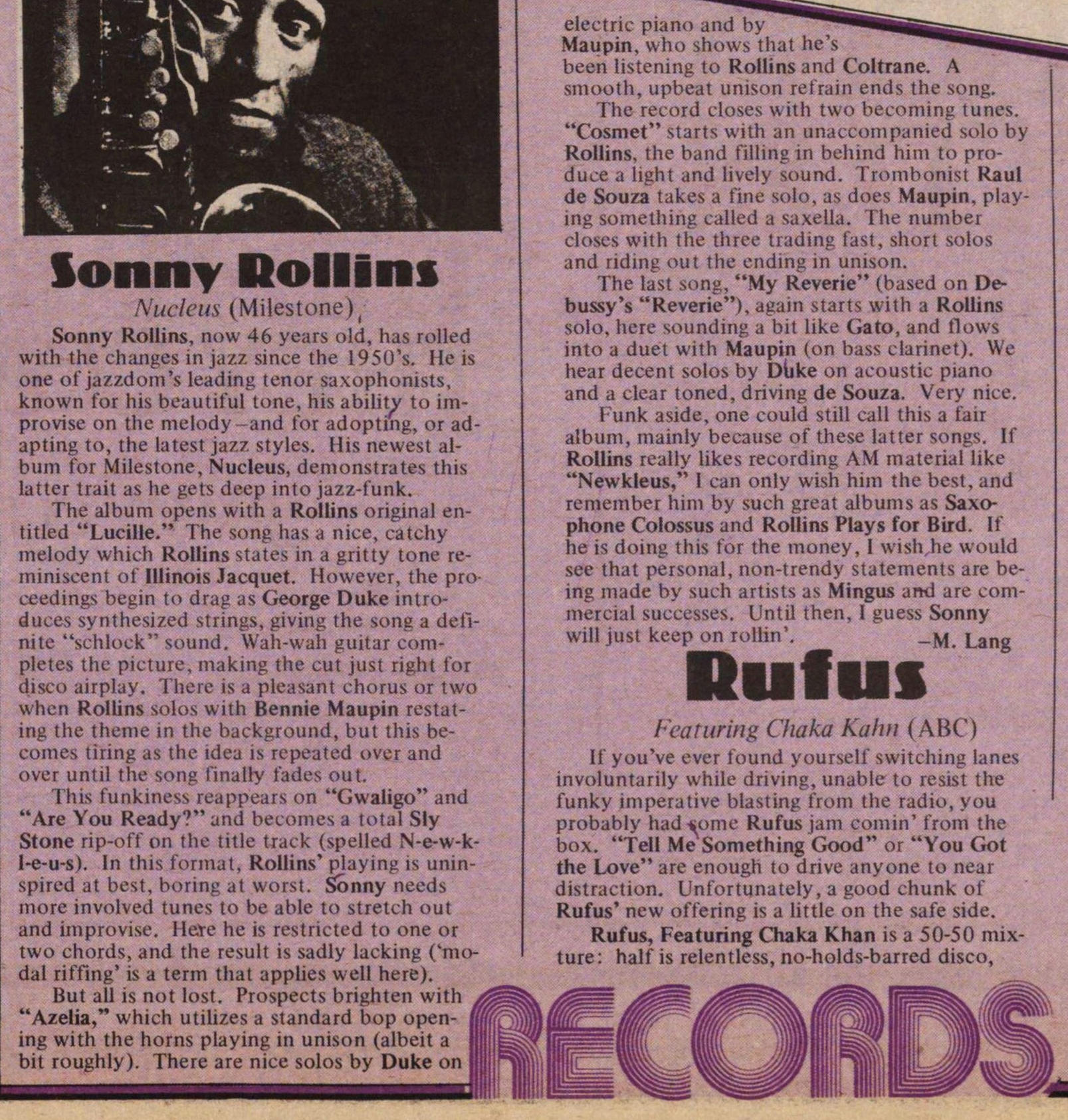 Sonny Rollins, now 46 years old, has rolled with the changes in jazz since the 1950's. He is one of jazzdom's leading tenor saxophonists, known for his beautiful tone, his ability to improvise on the melody - and for adopting, or adapting to, the latest jazz styles. His newest album for Milestone, Nucleus, demonstrates this latter trait as he gets deep into jazz-funk.

The album opens with a Rollins original entitled "Lucille." The song has a nice, catchy melody which Rollins states in a gritty tone reminiscent of Illinois Jacquet. However, the proceedings begin to drag as George Duke introduces synthesized strings, giving the song a definite "schlock" sound. Wah-wah guitar completes the picture, making the cut just right for disco airplay. There is a pleasant chorus or two when Rollins solos with Bennie Maupin restating the theme in the background, but this becomes tiring as the idea is repeated over and over until the song finally fades out.

This funkiness reappears on "Gwaligo" and "Are You Ready?" and becomes a total Sly Stone rip-off on the title track (spelled N-e-w-k-l-e-u-s). In this format, Rollins' playing is uninspired at best, boring at worst. Sonny needs more involved tunes to be able to stretch out and improvise, Here he is restricted to one or two chords, and the result is sadly lacking ('modal riffing' is a term that applies well here).

But all is not lost. Prospects brighten with "Azelia," which utilizes a Standard bop opening with the horns playing in unison (albeit a bit roughly). There are nice solos by Duke on electric piano and by Maupin, who shows that he's been listening to Rollins and Coltrane. A smooth, upbeat unison refrain ends the song.

The record closes with two becoming tunes. "Cosmet" starts with an unaccompanied solo by Rollins, the band filling in behind him to produce a light and lively sound. Trombonist Raul de Souza takes a fine solo, as does Maupin, playing something called a saxella. The number closes with the three trading fast, short solos and riding out the ending in unison.

The last song, "My Reverie" (based on Debussy's "Reverie"), again starts with a Rollins solo, here sounding a bit like Gato, and flows into a duet with Maupin (on bass clarinet). We hear decent solos by Duke on acoustic piano and a clear toned, driving de Souza. Very nice.

Funk aside, one could still call this a fair album, mainly because of these latter songs. If Rollins really likes recording AM material like "Newkleus," I can only wish him the best, and remember him by such great albums as Saxophone Colossus and Rollins Plays for Bird. If he is doing this for the money, I wish he would see that personal, non-trendy statements are being made by such artists as Mingus and are commercial successes. Until then. I guess Sonny will just keep on rollin'.