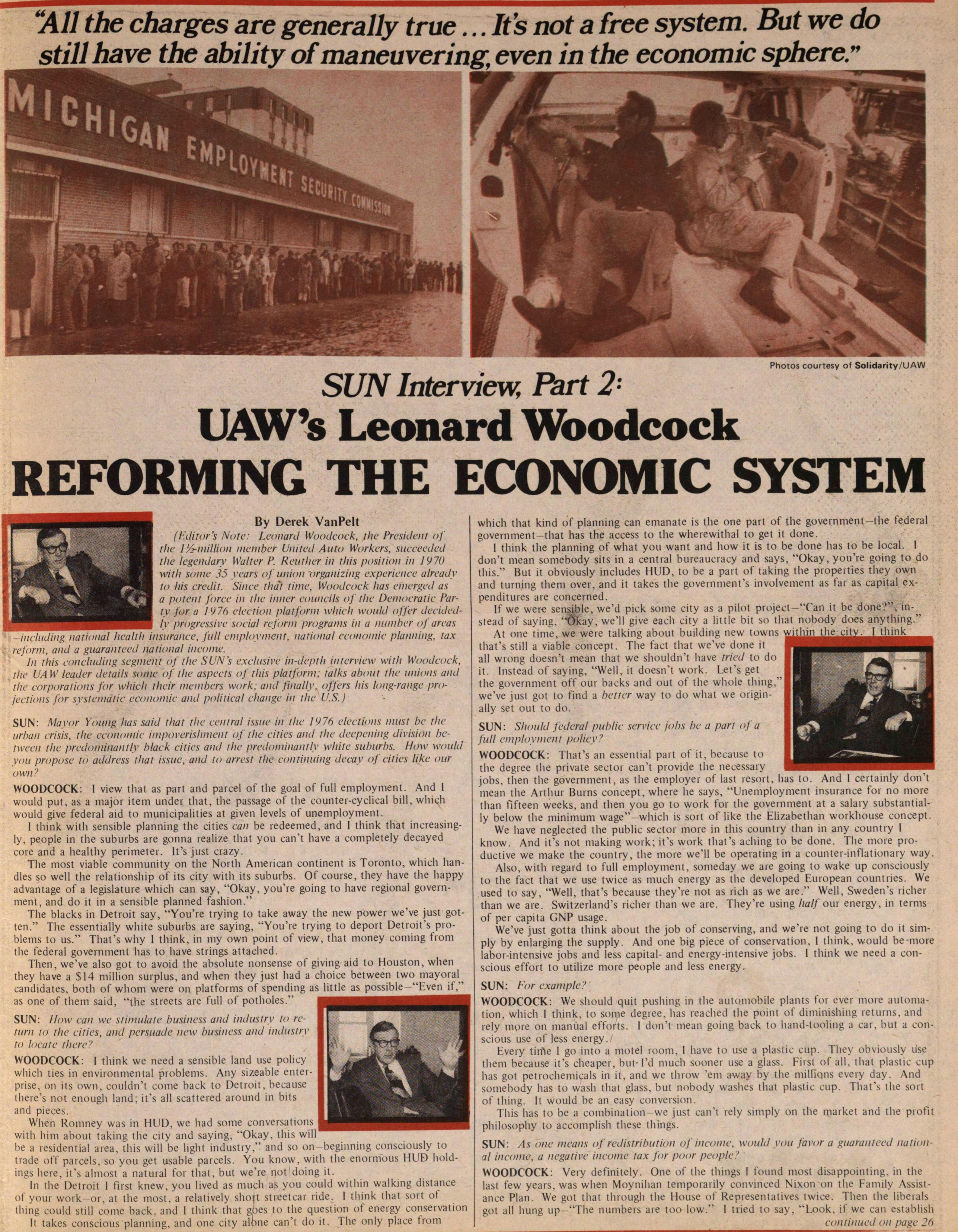 (Editor's Note: Leonard Woodcock, the President of the 1/2-million member United Auto Workers, succeeded the legendary Walter P. Reuther in this position in 970 with some 35 years of union organizing experience already to his credit. Since that time, Woodcock has emerged as a potent force in the inner councils of the Democratic Party for a 1976 election platform which would offer decidedly progressive social reform programs in a number of areas including national health insurance, full employment, national economic planning, tax reform, and a guaranteed national income.

In this concluding segment of the SUN 's exclusive in-depth interview with Woodcock, the UAW leader details some of the aspects of this platform; talks about the unions and the corporations for which their members work; and finally, offers his long-range projections for systematic economic and political change in the U.S.)

WOODCOCK: I view that as part and parcel of the goal of full employment. And I would put, as a major item under that, the passage of the counter-cyclical bill, which would give federal aid to municipalities at given levels of unemployment.

I think with sensible planning the cities can be redeemed, and I think that increasingly, people in the suburbs are gonna realize that you can't have a completely decayed core and a healthy perimeter. It's just crazy.

The most viable community on the North American continent is Toronto, which handles so well the relationship of its city with its suburbs. Of course, they have the happy advantage of a legislature which can say, "Okay, you're going to have regional government, and do it in a sensible planned fashion."

The blacks in Detroit say, "You're trying to take away the new power we've just gotten." The essentially white suburbs are saying, "You're trying to deport Detroit's problems to us." That's why I think, in my own point of view, that money coming from the federal government has to have strings attached.

Then, we've also got to avoid the absolute nonsense of giving aid to Houston, when they have a $14 million surplus, and when they just had a choice between two mayoral candidates, both of whom were on platforms of spending as little as possible - "Even if," as one of them said, "the streets are full of potholes."

WOODCOCK: I think we need a sensible land use policy which ties in environmental problems. Any sizeable enterprise, on its own, couldn't come back to Detroit, because there's not enough land; it's all scattered around in bits and pieces.

When Romney was in HUD, we had some conversations I with hini about taking the city and saying, "Okay, this will be a residential area, this will be light industry. and so on - beginning consciously to trade off parcels, so you get usable parcels. You know, with the enormous HUB holdings here, it's almost a natural for that, but we're not doing it.

In the Detroit I first knew, you lived as much as you could within walking distance of your work or, al the most. a relatively short streetcar ride. I think that sort of thing could still come back, and I think that goes to the question of energy conservation.

It takes conscious planning, and one city alone can't do it. The only place from which that kind of planning can emanate is the one part of the government - the federal government - that has the access to the wherewithal to get it done.

I think the planning of what you want and how it is to be done has to be local. I don't mean somebody sits in a central bureaucracy and says, "Okay, you're going to do this." But it obviously includes HUD, to be a part of taking the properties they own and turning them over, and it takes the government's involvement as far as capital expenditures are concerned.

If we were sensible, we'd pick some city as a pilot project- "Can it be done'", instead of saying. "Okay, we'll give each city a little bit so that nobody does anything."

At one time we were talking about building new towns within the city. I think that's still a viable concept. The fact that we've done it all wrong doesn't mean that we shouldn't have tried to do it. Instead of saying, "Well, it doesn't work. Let's get the government off our backs and out of the whole thing," we've just got lo find a better way to do what we originally set out to do.

SUN: Should federal public service jobs be a part of a full employment policy?

WOODCOCK: That's an essential part of it, because to the degree the private sector can't provide the necessary jobs, then the government, as the employer of last resort, has to. And I certainly don't mean the Arthur Burns concept, where he says, "Unemployment insurance for no more than fïfteen weeks, and then you go to work for the government at a salary substantially below the minimum wage" - which is sort of like the Elizabethan workhouse concept.

We have neglected the public sector more in this country than in any country I know. And it's not making work; it's work that's aching to be done. The more productive we make the country, the more we'll be operating in a counler-inflationary way.

Also, with regard to full employment, someday we are going to wake up consciously to the fact that we use twice as much energy as the developed European countries. We used to say, "Well, that's because they're not as rich as we are." Well, Sweden's richer than we are. Switzerland's richer than we are. They're using half our energy, in terms of per capita GNP usage.

We've just gotta think about the job of conserving, and we're not going to do it simply by enlarging the supply. And one big piece of conservation, I think, would be more labor-intensive jobs and less and energy-intensive jobs. I think we need a conscious effort to utilize more people and less energy.

WOODCOCK. We should quit pushing in the automobile plants for ever more automation, which I think, to some degree, has readied the point of diminishing returns, and rely more on manual efforts. I don't mean going back to hand-tooling a car, but a conscious use of less energy.

Every time I go into a motel room, I have to use a plastic cup. They obviously use them because it's cheaper, I'd much sooner use a glass. First of all. that plastic cup has got petrochemicals in it, and we throw 'em away by the millions every day. And somebody has to wash that glass. but nobody washes that plastic cup. That's the sort of thing. It would be an easy conversion.

This has to be a combination - we just can't rely simply on the market and the profit philosophy to accomplish these things.

SUN: As one means of redistribution of income, would yon favor a guaranteed national income, a negative income tax for poor people?

WOODCOCK: Very definitely. One of the things I found most disappointing, in the last few years, was when Moynihan temporarily convinced Nixon on the Family Assistance Plan. We got that through the House of Representatives twice. Then the liberals got all hung up -  "The numbers are too low." I tried to say, "Look, if we can establish