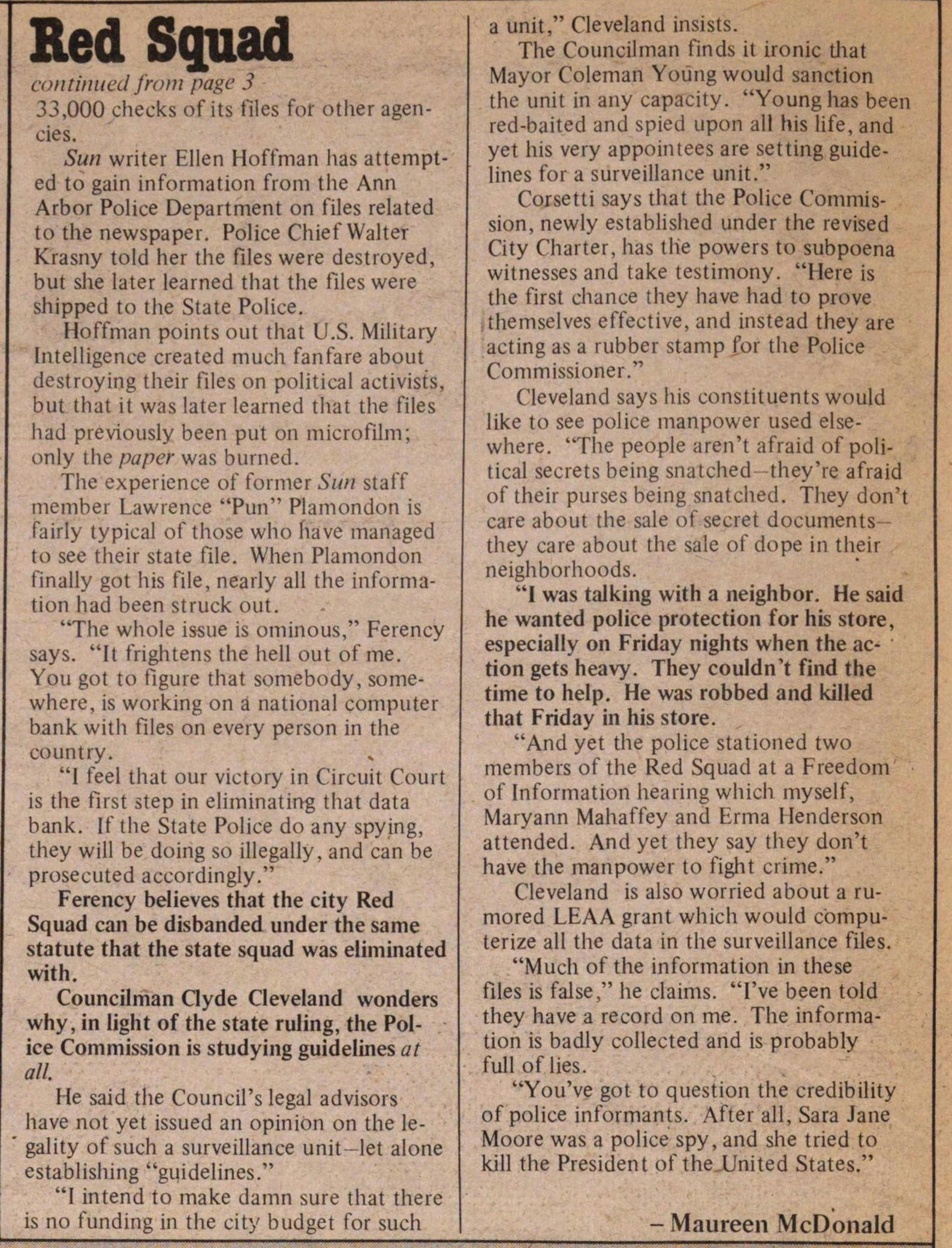 It was a rough week for Big Brother in Michigan.

"What to do with the files is the bigger question," says Zolton Ferency, President of the Socialist Human Rights Party of Michigan, which successfully sued to disband the state Red Squad. "Some people were damaged. They would not know unless they examined the files themselves.

"Everyone wants the information destroyed. It is just that people should know what is in there so they can take the proper action."

That kind of action is just what Detroit Police Chief Philip Tannian is afraid of.

Tannian told Detroit's Common Council that he would not disclose information in the files, even to the Police Commission, unless the Mayor ordered him to.

"There could be people killed if some of this got out," he said.

George Corsetti, president of Michigan Legal Services, which has filed suit in Wayne County calling for the abolition of the city Red Squad, says, "The people involved are essentially non-violent. Let us say they would be very pissed off by the information about them.

"People understand how they have been hurt by spying activities. They've been screwed over by the police. It is no wonder the Left is so damned fragmented when police informers and agents provocateurs have been infiltrating groups over the last fifteen years."

The Police Commission's hearing on the surveillance unit drew more than 150 people, including representatives of the United Auto Workers, Council members Erma Henderson, Clyde Cleveland and Maryann Mahaffey, and various political groups. Each called for dissolving the unit and releasing the information to affected citizens.

On the state level, Ingham County Circuit Court Judge Thomas Brown ruled that all data collected by the State Police surveillance unit would be destroyed in 60 days. Those citizens who believe their name might be listed must show proof to' the court to acquire their file by Maren 16.

Corsetti disagrees. He feels citizens must have more time to view their files and definite word on how the files would be destroyed.

The State Police unit was so zealous that by 1971, it had collected a cumbersome and outdated file on 200,000 Michigan citizens - adding 30,000 new names in 1970 alone, according to its annual report. In that year alone, it ran over

Sun writer Ellen Hoftfman has attempted to gain information from the Ann Arbor Police Department on files related to the newspaper. Police Chief Walter Krasny told her the files were destroyed, but she later learned that the files were shipped to the State Police.

Hoffman points out that U.S. Military Intelligence created much fanfare about destroying their files on political activists, but that it was later learned that the files had previously been put on microfilm; only the paper was burned.

The experience of former Sun staff member Lawrence "Pun" Plamondon is fairly typical of those who have managed to see their state file. When Plamondon finally got hts file, nearly all the information had been struck out.

"The whole issue is ominous," Ferency says. "It frightens the hell out of me. You got to figure that somebody, somewhere, is working on a national computer bank with files on every person in the country.

"I feel that our victory in Circuit Court is the first step in eliminating that data bank. If the State Police do any spying, they will be doing so illegally, and can be prosecuted accordingly."

Ferency believes that the city Red Squad can be disbanded under the same statute that the state squad was eliminated with.

Councilman Clyde Cleveland wonders why, in light of the state ruling, the Police Commission is studying guidelines at all.

He said the Council's legal advisors have not yet issued an opinion on the legality of such a surveillance unit let alone establishing "guidelines."

"I intend to make damn sure that there is no funding in the city budget for such a unit," Cleveland insists.

The Councilman finds it ironic that Mayor Coleman Young would sanction the unit in any capacity. "Young has been red-baited and spied upon all his life, and yet his very appointees are setting guidelines for a surveillance unit."

Corsetti says that the Police Commission, newly established under the revised City Charter, has the powers to subpoena witnesses and take testimony. "Here is the first chance they have had to prove themselves effective, and instead they are acting as a rubber stamp for the Police Commissioner."

"I was talking with a neighbor. He said he wanted police protection for his store, especially on Friday nights when the action gets heavy. They couldn't find the time to help. He was robbed and killed that Friday in his store.

"And yet the police stationed two members of the Red Squad at a Freedom of Information hearing which myself , Maryann Mahaffey and Erma Henderson attended. And yet they say they don't have the manpower to fight crime."

Cleveland is also worried about a rumored LEAA grant which would computerize all the data in the surveillance files.

"Much of the information in these files is false," he claims. "I've been told they have a record on me. The information is badly collected and is probably full of lies.

"You've got to question the credibility of police informants. After all, Sara Jane Moore was a police spy, and she tried to kill the President of the United States."