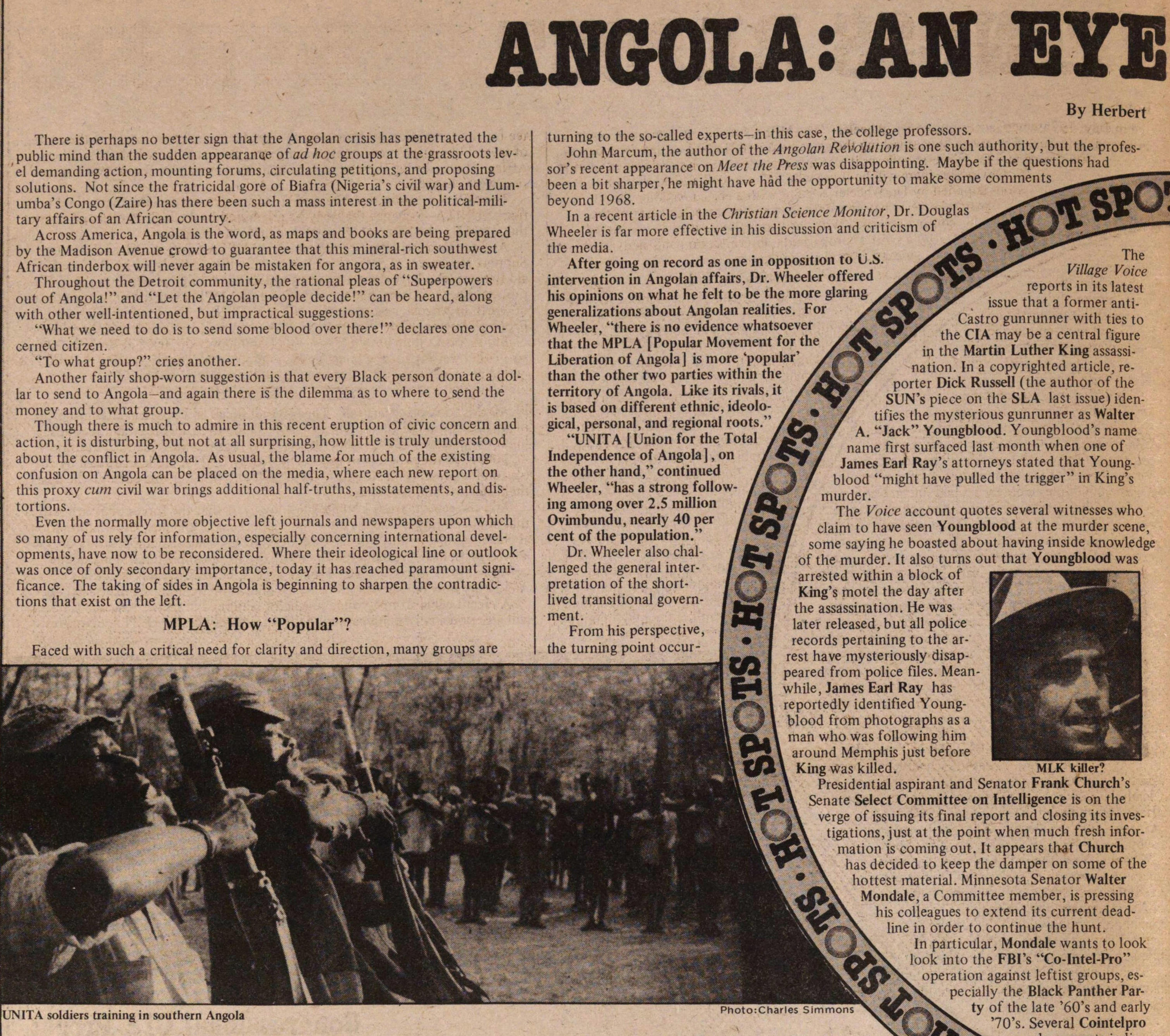 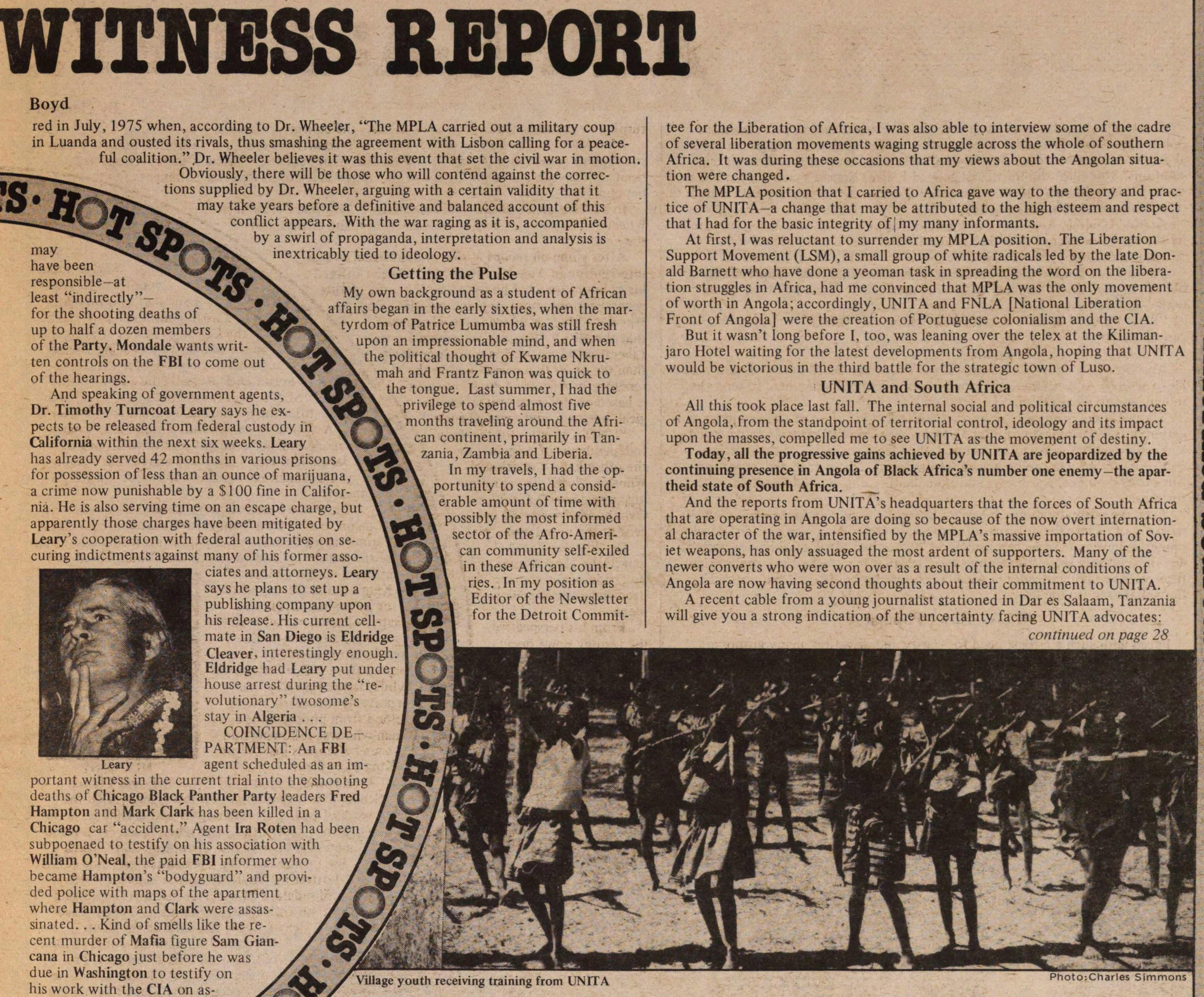 There is perhaps no better sign that the Angolan crisis has penetrated the public mind than the sudden appearance of ad hoc groups at the grassroots level demanding action, mounting forums, circulating petitions, and proposing solutions. Not since the fratricidal gore of Biafra (Nigeria's civil war) and Lumumba's Congo (Zaire) has there been such a mass interest in the political-military affairs of an African country.

Across America, Angola is the word, as maps and books are being prepared by the Madison Avenue crowd to guarantee that this mineral-rich southwest African tinderbox will never again be mistaken for angora, as in sweater.

Throughout the Detroit community, the rational pleas of "'Superpowers out of Angola!" and "Let the Angolan people decide!" can be heard, along with other well-intentioned, but impractical suggestions:

"What we need to do is to send some blood over there!" declares one concerned citizen.

"To what group?" cries another.

Another fairly shop-worn suggestion is that every Black person donates a dollar to send to Angola-and again there is the dilemma as to where to send the money and to what group.

Even the normally more objective left journals and newspapers upon which so many of us ïely for information, especially concerning international developments, have now to be reconsidered. Where their ideological line or outlook was once of only secondary importance, today it has reached paramount significance. The taking of sides in Angola is beginning to sharpen the contradictions that exist on the left.

Faced with such a critical need for clarity and direction, many groups are turning to the so-called experts-in this case, the college professors.

John Marcum the author of the Angolan Revolution is one such authority, but the professor's recent appearance on Meet the Press was disappointing. Maybe if the questions had been a bit sharper he might have had the opportunity to make some comments beyond 1968.

ín a recent article in the Christian Science Monitor, Dr. Douglas Wheeler is far more effective in his discussion and criticism of the media.

After going on record as one in opposition to U.S. intervention in Angolan affairs, Dr. Wheeler offered his opinions on what he felt to be the more glaring generalizations about Angolan realities. For Wheeler, "there is no evidence whatsoever that the MPLA [Popular Movement for the Liberation of Angola ) is more popular than the other two parties within the territory of Angola. Like its rivals, it is based on different ethnic, ideological, personal, and regional roots."

"UNITA [Union for the Total j Independence of Angola], on the other hand," continued Wheeler, "has a strong following among over 2.5 million Ovimbundu, nearly 40 percent of the population."

From his perspective, the turning point Boyd occurred in July 1975 when according to Dr. Wheeler, "The MPLA carried out a military coup in Luanda and ousted its rivals, thus smashing the agreement with Lisbon calling for a peaceful coalition.".Dr. Wheeler believes it was this event that set the civil war in motion. Obviously, there will be those who will contend against the corrections supplied by Dr. Wheeler, arguing with a certain validity that it may take years before a definitive and balanced account of this conflict appears. With the war raging as it is, accompanied by a swirl of propaganda, interpretation, and analysis is inextricably tied to ideology.

My own background as a student of African affairs began in the early sixties when the martyrdom of Patrice Lumumba was still fresh upon an impressionable mind, and when the political thought of Kwame Nkru mah and Frantz Fanon was quick to the tongue. Last summer, I had the privilege to spend almost five months traveling around the African continent, primarily in Tanzania, Zambia, and Liberia.

In my travels. I had the opportunity to spend a considerable amount of time with possibly the most informed sector of the Afro-American community self-exiled in these African countries. In my position as Editor of the Newsletter for the Detroit Committee for the Liberation of África, I was also able to interview some of the cadres of several liberation movements waging struggle across the whole of southern Africa. It was during these occasions that my views about the Angolan situation were changed.

The MPLA position that I carried to Africa gave way to the theory and practice of UNITA-a change that may be attributed to the high esteem and respect that I had for the basic integrity of my many informants.

At first, I was reluctant to surrender my MPLA position. The Liberation Support Movement (LSM), a small group of white radicáis led by the late Donald Barnett who have done a yeoman task in spreading the word on the liberation struggles in Africa, had me convinced that MPLA was the only movement of worth in Angola; accordingly, UNITA and FNLA [National Liberation Front of Angola] was the creation of Portuguese colonialism and the CIA.

But it wasn't long before I, too, was leaning over the telex at the Kilimanjaro Hotel waiting for the latest developments from Angola, hoping that UNITA would be victorious in the third battle for the strategic town of Luso.

All this took place last fall. The internal social and political circumstances of Angola, from the standpoint of territorial control, ideology and its impact upon the masses, compelled me to see UNITA as the movement of destiny.

Today, all the progressive gains achieved by UNITA are jeopardized by the continuing presence in Angola of Black Africa's number one enemy-the apartheid state of South Africa.

And the reports from UNITA's headquarters that the forces of South Africa that are operating in Angola are doing so because of the now overt international character of the war, intensified by the MPLA's massive importation of Soviet weapons, has only assuaged the most ardent of supporters. Many of the newer converts who were won over as a result of the internal conditions of Angola are now having second thoughts about their commitment to UNITA.

A recent cable from a young journalist stationed in Dar es Salaam, Tanzania will give you a strong indication of the uncertainty facing UNITA advocates: continued on page 28