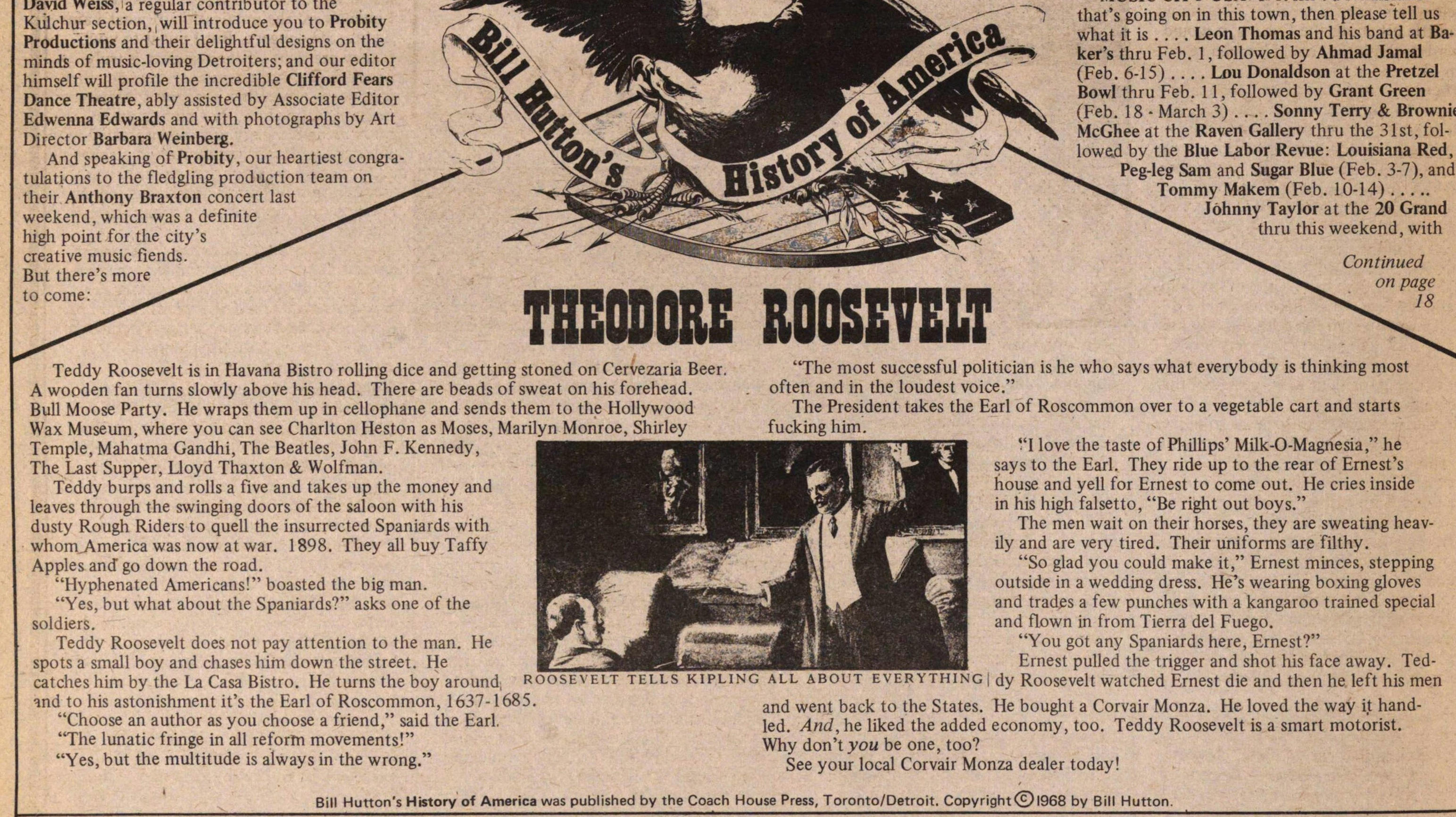 Teddy Roosevelt is in Havana Bistro rolling dice and getting stoned on Cervezaria Beer. A wooden fan turns slowly above his head. There are beads of sweat on his forehead. Bull Moose Party. He wraps them up in cellophane and sends them to the Hollywood Wax Museum, where you can see Charlton Heston as Moses, Marilyn Monroe, Shirley Temple, Mahatma Gandhi, The Beatles, John F. Kennedy, The Last Supper, Lloyd Thaxton & Wolfman.

Teddy burps and rolls a five and takes up the money and leaves through the swinging doors of the saloon with his dusty Rough Riders to quell the insurrected Spaniards with whom America was now at war. 1898. They all buy Taffy Apples and go down the road.

"Yes, but what about the Spaniards?" asks one of the soldiers.

Teddy Roosevelt does not pay attention to the man. He spots a small boy and chases him down the street.

He catches him by the La Casa Bistro. He turns the boy around, and to his astonishment, it's the Earl of Roscommon, 1637-1685.

"Choose an author as you choose a friend," said the Earl. "The lunatic fringe in all reform movements!"

"Yes, but the multitude is always in the wrong."

'The most successful politician is he who says what everybody is thinking most often and in the loudest voice."

The President takes the Earl of Roscommon over to a vegetable cart and starts fucking him.

"I love the taste of Phillips' Milk-O-Magnesia," he says to the Earl. They ride up to the rear of Ernest's house and yell for Ernest to come out. He cries inside in his high falsetto, "Be right out boys."

The men wait on their horses, they are sweating heavily and are very tired. Their uniforms are filthy.

"So glad you could make it," Ernest minces, stepping outside in a wedding dress. He's wearing boxing gloves and trades a few punches with a kangaroo trained special and flown in from Tierra del Fuego.

"You got any Spaniards here, Ernest?" Ernest pulled the trigger and shot his face away. Teddy Roosevelt watched Ernest die and then he left his men and went back to the States. He bought a Corvair Monza. He loved the way it handled. And, he liked the added economy, too. Teddy Roosevelt is a smart motorist. Why don't you be one, too?