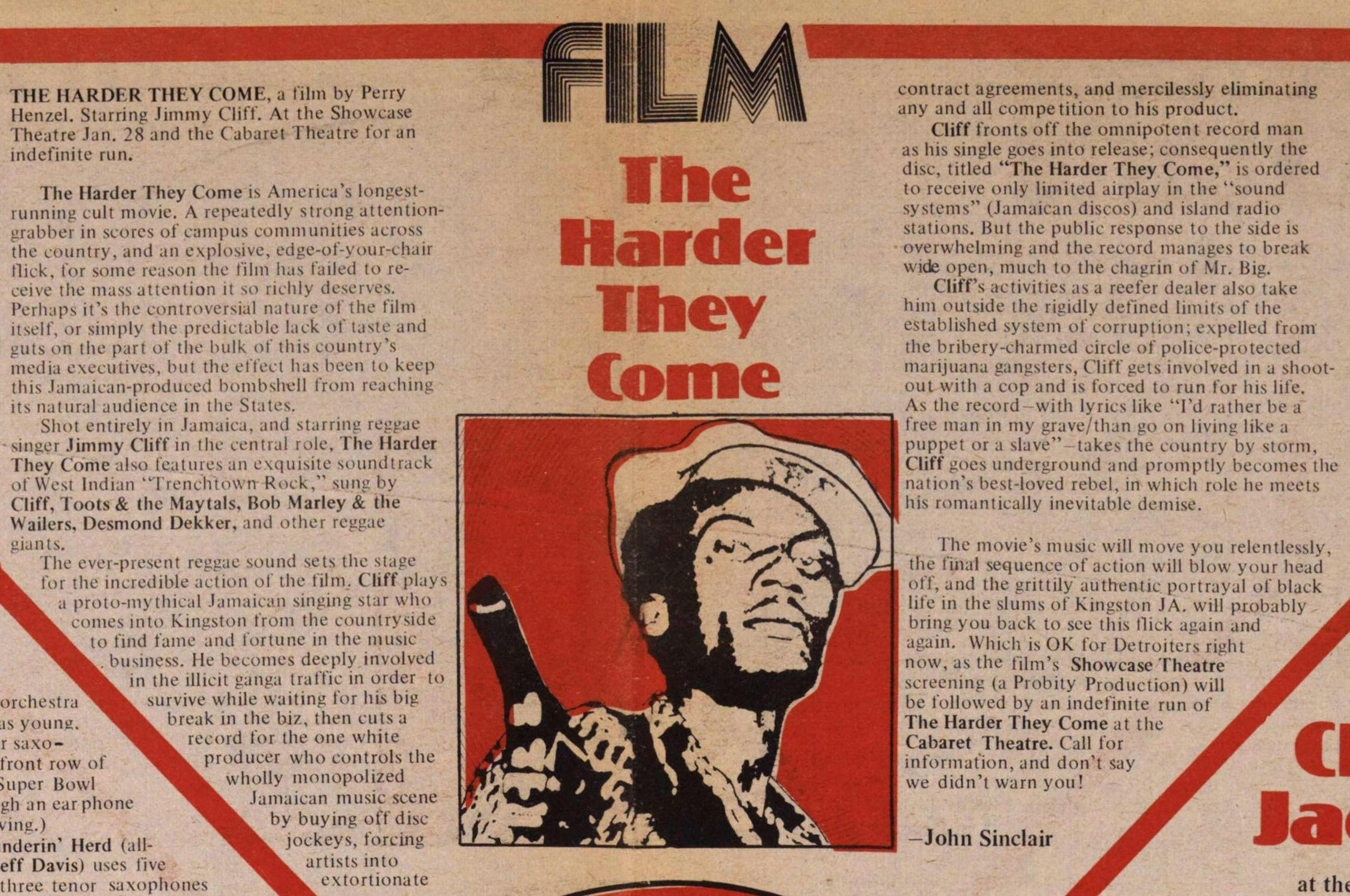 THE HARDER THEY COME

The HARDER THE COME, a film by Perry Henzel. Starring Jimmy Cliff. At the Showcase Theatre Jan. 28 and the Cabaret Theatre for an indefinite run.

The Harder They Come is America's longest-running cult movie. A repeatedly strong attention grabber in scores of campus communities across the country. and an explosive, edge-of-your-chair flick. for some reason the film has failed to receive the mass attention it so richly deserves. Perhaps it's the controversial  nature of the film itself or simply the predictable lack of taste and guts on part of the bulk of this country's media executives, but the effect has been to keep this Jamaican-produced bombshell from reaching its natural audience in the States.

The ever-present reggae sound sets the stage for the incredible action of the film. Cliff plays a proto-mythical Jamaican singing star who comes into Kingston from the countryside to find fame and fortune in the music business. He becomes deeply involved in the illicit ganga traffic in order to survive while wailing for his big break in the biz then cuts a record for the one white producer who controls the wholly monopolized Jamaican music scene by buying off disk jockeys, forcing artists into extortionate contract agreements, and mercilessly eliminating any and all competition to his product.

Cliff fronts off the omnipotent record man as his single goes into release; consequently the disc, titled"The Harder They Come," is ordered lo receive only limited airplay in the "sound systems" (Jamaican discos) and island radio stations. But the public response to the side is overwhelming and the record manages to break wide open, much to the chagrín of Mr. Big. Cliff's activities as a reefer dealer also take him outside the rigidly defined limits of the established system of corruption; expelled from the bribery-charmed circle of police-protected marijuana gangsters, Cliff gets involved in a shootout with a cop and is forced to run tor his life. As the record-with lyrics like 'I'd rather be a free man in my grave than go on living like a puppet or a slave" takes the country by storm, Cliff goes underground and promptly becomes the nation's best-loved rebel, in which role he meets his romantically inevitable demise.

The movie's music will move yon relentlessly, the final sequence of action will blow your head off, and the gritty authentic portrayal of black life in the slums of Kingston JA. will probably bring yon back to see this flick again and again. Which is OK for Detroiters right now, as the film's Showcase Theatre screening (a Probity Production) will be followed by an indefinite run of The Harder They Come at the Cabaret Theatre. Call for information, and don't say we didn't warn you!