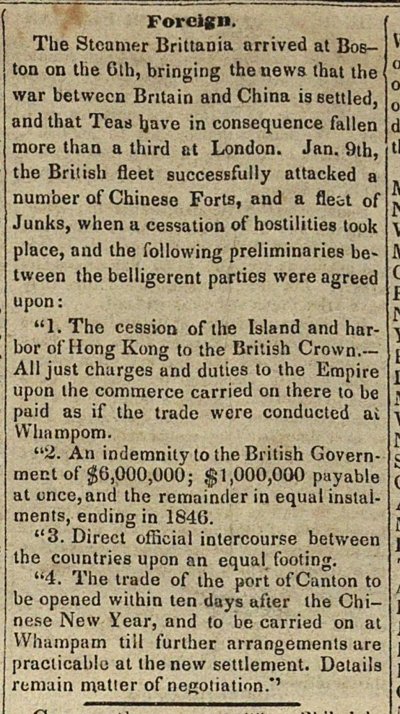 The Stcamer Brittania arrived at Boston on the Gth, bringing the news that the i war betwecn Bntain and China ia eettled, and that Teas rjave in consequence fallen more than a third at London. Jan. 9th, the British fleet successfully attacked a number of Chinese Forts, and a fleÃ³t of Junks, when a cessation of hostilities took ptace, and the following preliminaries between the belligerent parties were agreed upon: "1. The cession of the Islam! and harbor of Hong Kong to the British Crown. All just charges and duties to the Empire upon the commerce carried on there to be paid as if the trade were conducted ai Whnmpom. "2. An indemnity to the British Government of $6,000,000; $1,000,000 payable at once, and the remainder in equal instaiments, ending in 1846. "3. Direct official intercourse between the countries upon an equal footing. "4. The trade of the port of CantÃ³n to be opened within ten days after the Chinese New Year, and to be carried on at Whampam till further arrangemenls are practicable at the new settlement. Details reniuin matter of negotiation.'