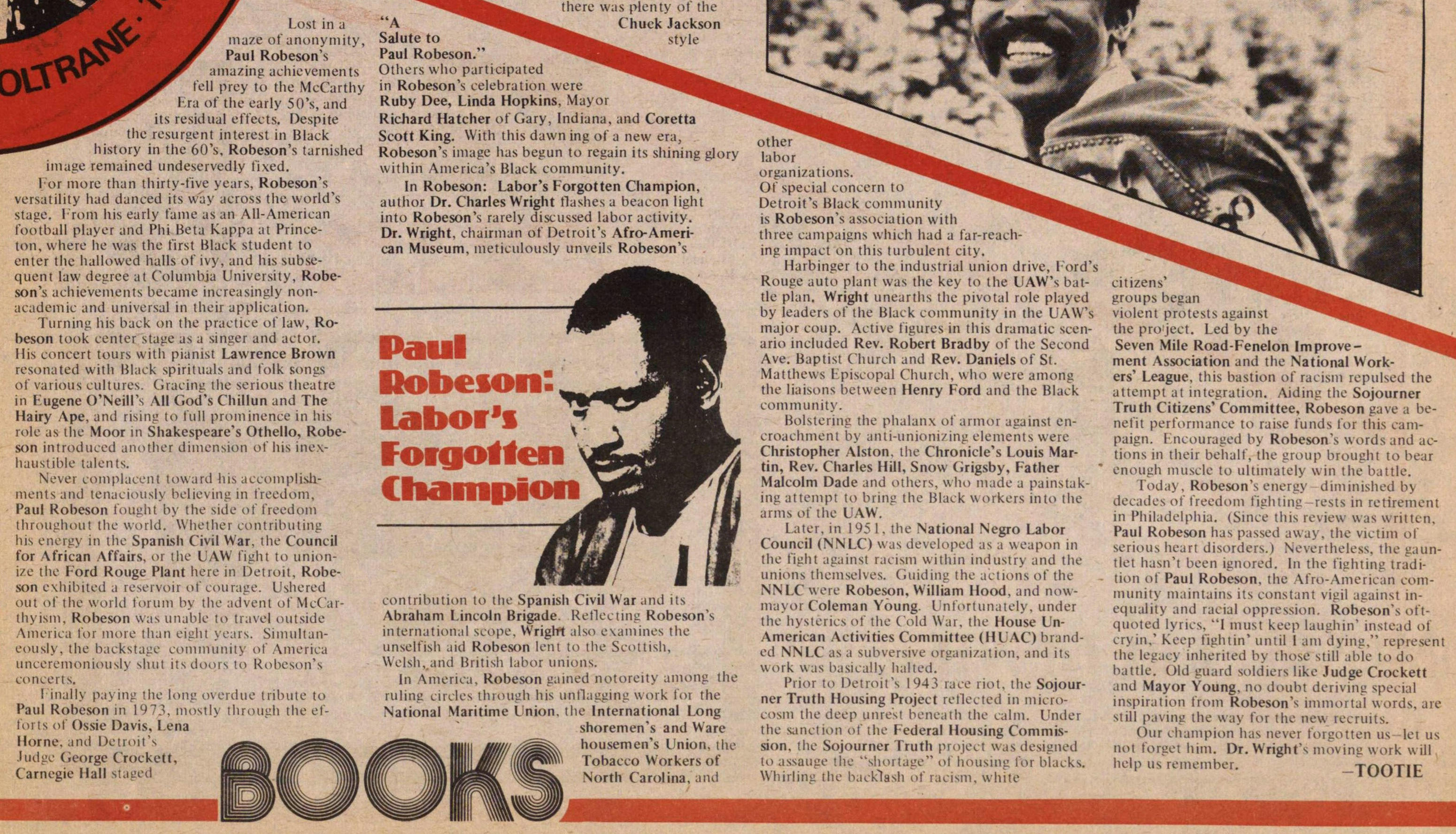 Lost in a maze of anonymity, Paul Robeson's amazing achievements fell prey to the McCarthy Era of the early 50's, and its residual effects. Despite the resurgent interest in Black history in the 60's, Robeson's tarnished image remained undeservedly fixed.

For more than thirty-five years, Robeson's versatility had danced its way across the world's stage. From his early fame as an American football player and Phi Beta Kappa at Princeton, where he was the first Black student to enter the hallowed halls of ivy, and his subsequent law degree at Columbia University, Robeson's achievements became increasingly nonacademic and universal in their application.

Turning his back cm the practice of law, Robeson took center stage as a singer and actor. His concert tours with pianist Lawrence Brown resonated with Black spirituals and folk songs of various cultures, Gracing the serious theatre in Eugene O'NeilI's All God's Chillun and The Hairy Ape, and rising to full prominence in his role as the Moor in Shakespeare's Othello, Robeson introduced another dimension of his inexhaustible talents.

Never complacent toward his accomplishments and tenaciously believing in freedom, Paul Robeson fought by the side of freedom throughout the world. Whether contributing his energy in the Spanish Civil War, the Council for African Affairs, or the UAW fight to unionize the Ford Rouge Plant here in Detroit, Robeson exhibited a reservoir of courage. Ushered out of the world forum by the advent of McCarthyism, Robeson Was unable to travel outside America for more than eight years. Simultaneously. the backstage community of America unceremoniously shut its doors to Robeson's concerts.

Finally paying the long overdue tribute to Paul Robeson in 1973, mostly through the efforts of Ossie Davis, Lena Home, and Detroit's Judge George Crockett, Carnegie Hall staged "A Salute to Paul Robeson." Others who participated in Robeson's celebration were Ruby Dee, Linda Hopkins, Mayor Richard Hatcher of Gary, Indiana, and Coretta Scott King. With this dawning of a new era, Robeson's image lias begun to regain its shining glory within America's Black community.

In America, Robeson gained notoriety among the ruling circles through his unflagging work for the National Maritime Union, the International Longshoremen's and Warehousemen's Union, the Tobacco Workers of North Carolina, and other labor organizations. Of special concern to Detroit's Black community is Robeson's association with three campaigns which had a far-reaching impact on this turbulent city.

Harbinger to the industrial union drive, Ford's Rouge auto plant was the key to the UAW's battle plan. Wright unearths the pivotal role played by leaders of the Black community in the UAW's major coup. Active figures in this dramatic scenario included Rev. Robert Bradby of the Second Ave. Baptist Church and Rev. Daniels of St. Matthew Episcopal Church, who were among the liaisons between Henry Ford and the Black community.

Bolstering the phalanx of armor against encroachment by anti-unionizing elements were Christopher Alston, the Chronicle's Louis Martin, Rev. Charles Hill, Snow Grigsby, Father Malcolm Dade and others, who made a painstaking attempt to bring the Black workers into the arms of the UAW.

Later in 1951, the National Negro Labor Council (NNLC) was developed as a weapon in the fight against racism within industry and the unions themselves. Guiding the actions of the NNLC were Robeson, William Hood, and now-mayor Coleman Young. Unfortunately, under the hysterics of the Cold War, the House Un-American Activities Committee (HUAC) branded NNLC as a subversive Organization, and its work was basically halted.

Prior to Detroit's 1943 race riot, the Sojourner Truth Housing Project reflected in microcosm the deep unrest beneath the calm. Under the sanction of the Federal Housing Commission. the Sojourner Truth project was designed in assuage the "shortage" of housing for blacks. Whirling the backlash of racism, white citizens' groups began violent protests against the project. Led by the Seven Mile Road-Fenelon Improvement Association and the National Workers' League, this bastion of racism repulsed the attempt at integration. Aiding the Sojourner Truth Citizens' Committee, Robeson gave a benefit performance to raise funds for this campaign. Encouraged by Robeson 's words and actions in their behalf, the group brought to bear enough muscle to ultimately win the battle.

Today, Robeson's energy - diminished by decades of freedom fïghting - rests in retirement in Philadelphia. (Since this review was written. Paul Robeson has passed away, the victim of serious heart disorders.) Nevertheless, the gauntlet hasn't been ignored. In the fighting tradition of Paul Robeson, the Afro-American community maintains its constant vigil against inequality and racial oppression. Robeson's oft-quoted lyrics, "I must keep laughin' instead of cryin', Keep fightin' until I am dying," represent the legacy inherited by those still able to do battle. Old guard soldiers like Judge Crockett and Mayor Young, no doubt deriving special inspiration from Robeson's immortal words, are still paving the way for the new recruits.

Our champion has never forgotten us - let us not forget him. Dr. Wright's moving work will help us remember.