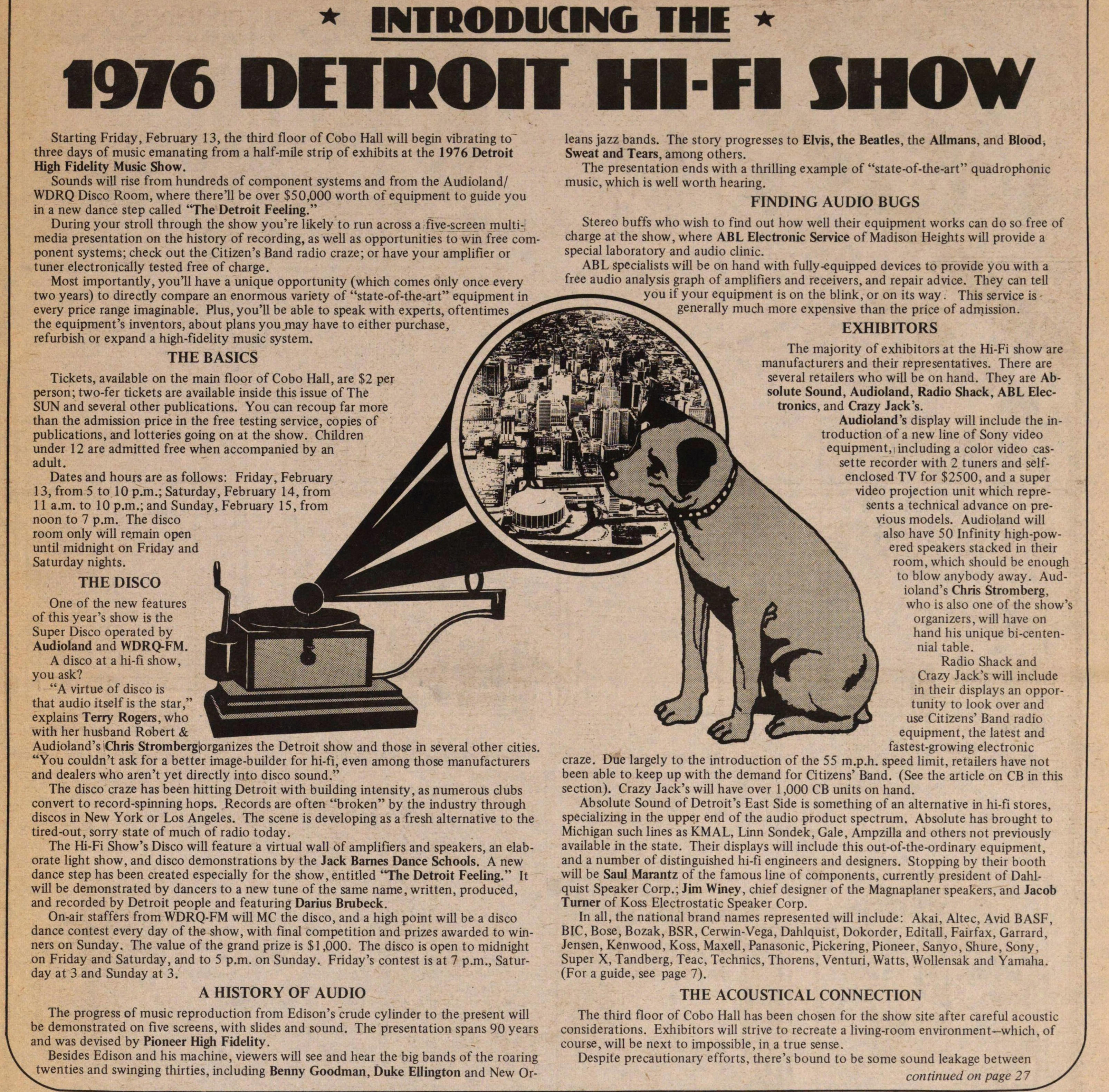 Starting Friday, February 13, the third floor of Cobo Hall will begin vibrating to three days of music emanating from a half-mile strip of exhibits at the 1976 Detroit High Fidelity Music Show.

Sounds will rise from hundreds of component systems and from the Audioland WDRQ Disco Room, where there'll be over $50,000 worth of equipment to guide you in a new dance step called 'The Detroit Feeling."

During your stroll through the show you're likely to run across a five-screen multimedia presentation on the history of recording, as well as opportunities to win free component systems; check out the Citizen's Band radio craze; or have your amplifier or tuner electronically tested free of charge.

Most importantly, you'll have a unique opportunity (which comes only once every two years) to directly compare an enormous variety of "state-of-the-art" equipment in every price range imaginable. Plus, you'll be able to speak with experts, oftentimes the equipment's inventors, about plans you may have to either purchase, refurbish or expand a high-fidelity music system.

Tickets, available on the main floor of Cobo Hall, are $2 per person; two-fer tickets are available inside this issue of The SUN and several other publications. You can recoup far more than the admission price in the free testing service, copies of publications, and lotteries going on at the show. Children under 12 are admitted free when accompanied by an adult.

One of the new features of this year's show is the Super Disco operated by Audioland and WDRQ-FM.

"A virtue of disco is that audio itself is the star," explains Terry Rogers, who with her husband Robert & Audioland's Chns Stromberg organizes the Detroit show and those in several other cities. "You couldn't ask for a better image-builder for hi-fi, even among those manufacturers and dealers who aren't yet directly into disco sound."

The disco craze has been hitting Detroit with building intensity, as numerous clubs convert to record-spinning hops. Records are often "broken" by the industry through discos in New York or Los Angeles. The scene is developing as a fresh alternative to the tired-out, sorry state of much of radio today.

The Hi-Fi Show's Disco will feature a virtual wall of amplifiers and speakers, an elaborate light show, and disco demonstrations by the Jack Barnes Dance Schools. A new dance step has been created especially for the show, entitled "The Detroit Feeling." It will be demonstrated by dancers to a new tune of the same name, written, produced, and recorded by Detroit people and featuring Darius Brubeck.

On-air staffers from WDRQ-FM will MC the disco, and a high point will be a disco dance contest every day of the show, with final competition and prizes awarded to winners on Sunday. The value of the grand prize is $1,000. The disco is open to midnight on Friday and Saturday, and to 5 p.m. on Sunday. Friday's contest is at 7 p.m., Saturday at 3 and Sunday at 3.

A HISTORY OF AUDIO

The progress of music reproduction from Edison's crude cylinder to the present will be demonstrated on five screens, with slides and sound. The presentation spans 90 years and was devised by Pioneer High Fidelity.

Besides Edison and his machine, viewers will see and hear the big bands of the roaring twenties and swinging thirties, including Benny Goodman, Duke Ellington and New Orleans jazz bands. The story progresses to Elvis, the Beatles, the Allmans, and Blood, Sweat and Tears, among others.

The presentation ends with a thrilling example of "state-of-the-art" quadrophonic music, which is well worth hearing.

Stereo buffs who wish to find out how well their equipment works can do so free of charge at the show, where ABL Electronic Service of Madison Heights will provide a special laboratory and audio clinic.

ABL Specialists will be on hand with fully-equipped devices to provide you with a free audio analysis graph of amplifiers and receivers, and repair advice. They can tell you if your equipment is on the blink, or on its way. This service is generally much more expensive than the price of admission.

The majority of exhibitors at the Hi-Fi show are manufacturers and their representatives. There are several retailers who will be on hand. They are Absolute Sound, Audioland, Radio Shack, ABL Electronics, and Crazy Jack's.

Audioland's display will include the introduction of a new line of Sony video equipment, including a color video cassette recorder with 2 tuners and self-enclosed TV for $2500, and a super video projection unit which represents a technical advance on previous models. Audioland will also have 50 Infinity high-powered speakers stacked in their room, which should be enough to blow anybody away. Audioland's Chris Stromberg, who is also one of the show's organizers, will have on hand his unique bi-centennial table.

Radio Shack and Crazy Jack's will include in their displays an opportunity to look over and use Citizens' Band radio equipment, the latest and fastest-growing electronic craze. Due largely to the introduction of the 55 m.p.h. speed limit, retailers have not been able to keep up with the demand for Citizens' Band. (See the article on CB in this section). Crazy Jack's will have over 1,000 CB units on hand.

Absolute Sound of Detroit's East Side is something of an alternative in hi-fi stores, specializing in the upper end of the audio product spectrum. Absolute has brought to Michigan such lines as KMAL, Linn Sondek, Gale, Ampzilla and others not previously available in the state. Their displays will include this out-of-the-ordinary equipment, and a number of distinguished hi-fi engineers and designers. Stopping by their booth will be Saul Marantz of the famous line of components, currently president of Dahlquist Speaker Corp.; Jim Winey, chief designer of the Magnaplaner speakers, and Jacob Turner of Koss Electrostatic Speaker Corp.

The third floor of Cobo Hall has been chosen for the show site after careful acoustic considerations. Exhibitors will strive to recreate a living-room environment - which, of course, will be next to impossible, in a true sense.

Despite precautionary efforts, there's bound to be some sound leakage between

rooms. Exhibitors, not unaware of this problem, tend to turn up the volume of the music in an attempt to mask or override sounds from adjacent rooms. Sometimes, the competition gets out of hand, and it's then that you're likely to see organizer Terry Rogers with sound level meter in hand, urging exhibitors to back off.

Sound tends to dull when exhibit rooms are filled with folks. It's a good idea to time your visit correctly. If you want more personal treatment, come at the non-peak hours. On Friday, the thinnest time is from 5 to 7 p.m. On Saturday, come early - best is the opening hour of 11 a.m. On Sunday, come early or at the closing few hours.

GETTING THE MOST OUT OF THE SHOW

The best way to see the show is to spend a few minutes in each room during your first walk through. After a first pass, return to the rooms that interest you the most for more in-depth sampling.

One of the chief delights of show-goers is to collect every piece of ad literature in sight. You'll see audiophiles leaving Cobo with shopping bags full of the stuff. The material allows you to review what you've seen in an unhurried atmosphere. The info generally includes a good deal of technical information and a minimum of superlatives. To make sorting through the jargon a bit easier, the SUN has included a glossary of technical terms in this special hi-fi show supplement. We'll also have free copies of back issues of the SUN at our exhibit room at the show. See you there!