Bears, Truckers, And The Citizens Band 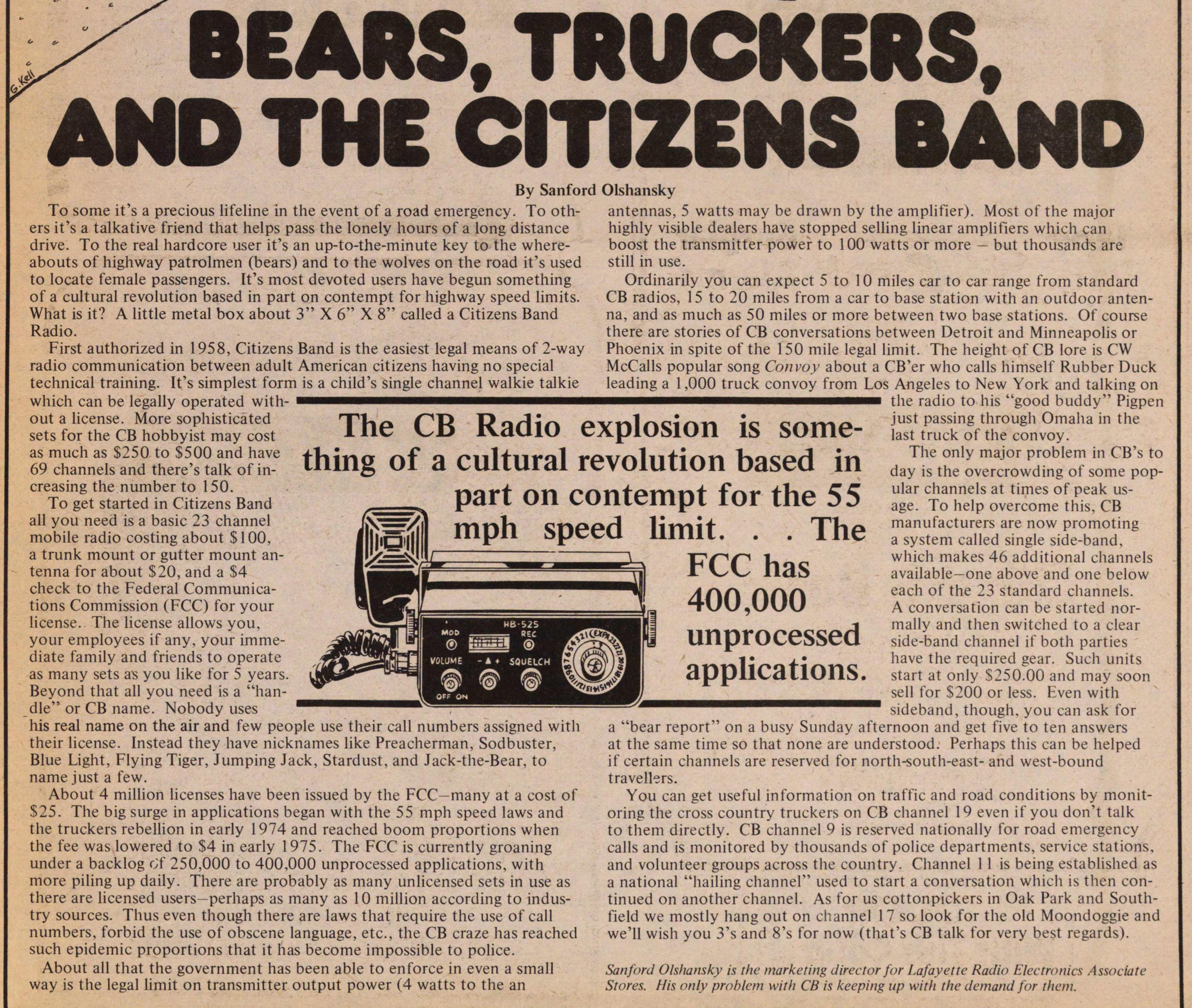 BEARS, TRUCKERS AND THE CITIZEN BAND

To some it's a precious lifeline in the event of a road emergency. To others it's a talkative friend that helps pass the lonely hours of a long distance drive. To the real hardcore user it's an up-to-the-minute key to the whereabouts of highway patrolmen (bears) and to the wolves on the road it's used to locate female passengers. It's most devoted users have begun something of a cultural revolution based in part on contempt for highway speed limits. What is it? A little metal box about 3" X 6" X 8" called a Citizens Band Radio.

First authorized in 1958, Citizens Band is the easiest legal means of 2-way radio communication between adult American citizens having no special technical training. It's simplest form is a child's single channel walkie talkie which can be legally operated without a license. More sophisticated sets for the CB hobbyist may cost as much as $250 to $500 and have 69 channels and there's talk of increasing the number to 150.

To get started in Citizens Band all you need is a basic 23 channel mobile radio costing about $100, a trunk mount or gutter mount antenna for about $20, and a $4 check to the Federal Communications Commission (FCC) for your license. The license allows you, your employees if any, your immediate family and friends to operate as many sets as you like for 5 years. Beyond that all you need is a "handle" or CB name. Nobody uses his real name on the air and few people use their call numbers assigned with their license. Instead they have nicknames like Preacherman, Sodbuster, Blue Light, Flying Tiger, Jumping Jack, Stardust, and Jack-the-Bear, to name just a few.

About 4 million licenses have been issued by the FCC- many at a cost of $25. The big surge in applications began with the 55 mph speed laws and the truckers rebellion in early 1974 and reached boom proportions when the fee was lowered to $4 in early 1975. The FCC is currently groaning under a backlog of 250,000 to 400,000 unprocessed applications, with more piling up daily. There are probably as many unlicensed sets in use as there are licensed users - perhaps as many as 10 million according to industry sources. Thus even though there are laws that require the use of call numbers, forbid the use of obscene language, etc, the CB craze has reached such epidemic proportions that it has become impossible to police.

About all that the government has been able to enforce in even a small way is the legal limit on transmitter output power (4 watts to the an antennas, 5 watts may be drawn by the amplifier). Most of the major highly visible dealers have stopped selling linear amplifiers which can boost the transmitter power to 100 watts or more - but thousands are still in use.

Ordinarily you can expect 5 to 10 miles car to car range from standard CB radios, 15 to 20 miles from a car to base station with an outdoor antenna, and as much as 50 miles or more between two base stations. Of course there are stories of CB conversations between Detroit and Minneapolis or Phoenix in spite of the 150 mile legal limit. The height of CB lore is CW McCalls popular song Convoy about a CB'er who calls himself Rubber Duck leading a 1,000 truck convoy from Los Angeles to New York and talking on the radio to his good buddy Pigpen just passing through Omaha in the last truck of the convoy.

The only major problem in CB's today is the overcrowding of some popular channels at times of peak usage. To help overcome this, CB manufacturers are now promoting a system called single side-band, which makes 46 additional channels available - one above and one below each of the 23 standard channels. A conversation can be started normally and then switched to a clear side-band channel if both parties have the required gear. Such units start at only $250.00 and may soon sell for $200 or less. Even with sideband, though, you can ask for a "bear report" on a busy Sunday afternoon and get five to ten answers at the same time so that none are understood. Perhaps this can be helped if certain channels are reserved for and west-bound travelers.

You can get useful information on traffic and road conditions by monitoring the cross country truckers on CB channel 19 even if you don't talk to them directly. CB channel 9 is reserved nationally for road emergency calls and is monitored by thousands of police departments, service stations, and volunteer groups across the country. Channel 11 is being established as a national "hailing channel" used to start a conversation which is then continued on another channel. As for us cottonpickers in Oak Park and Southfield we mostly hang out on channel 17 so look for the old Moondoggie and we'll wish you 3's and 8's for now (that's CB talk for very best regards).

Sanford Olshansky is the marketing director for Lafayette Radio Electronics Associate Stores. His only problem with CB is keeping up with the demand for them.