A Glossary Of Hi-fidelity 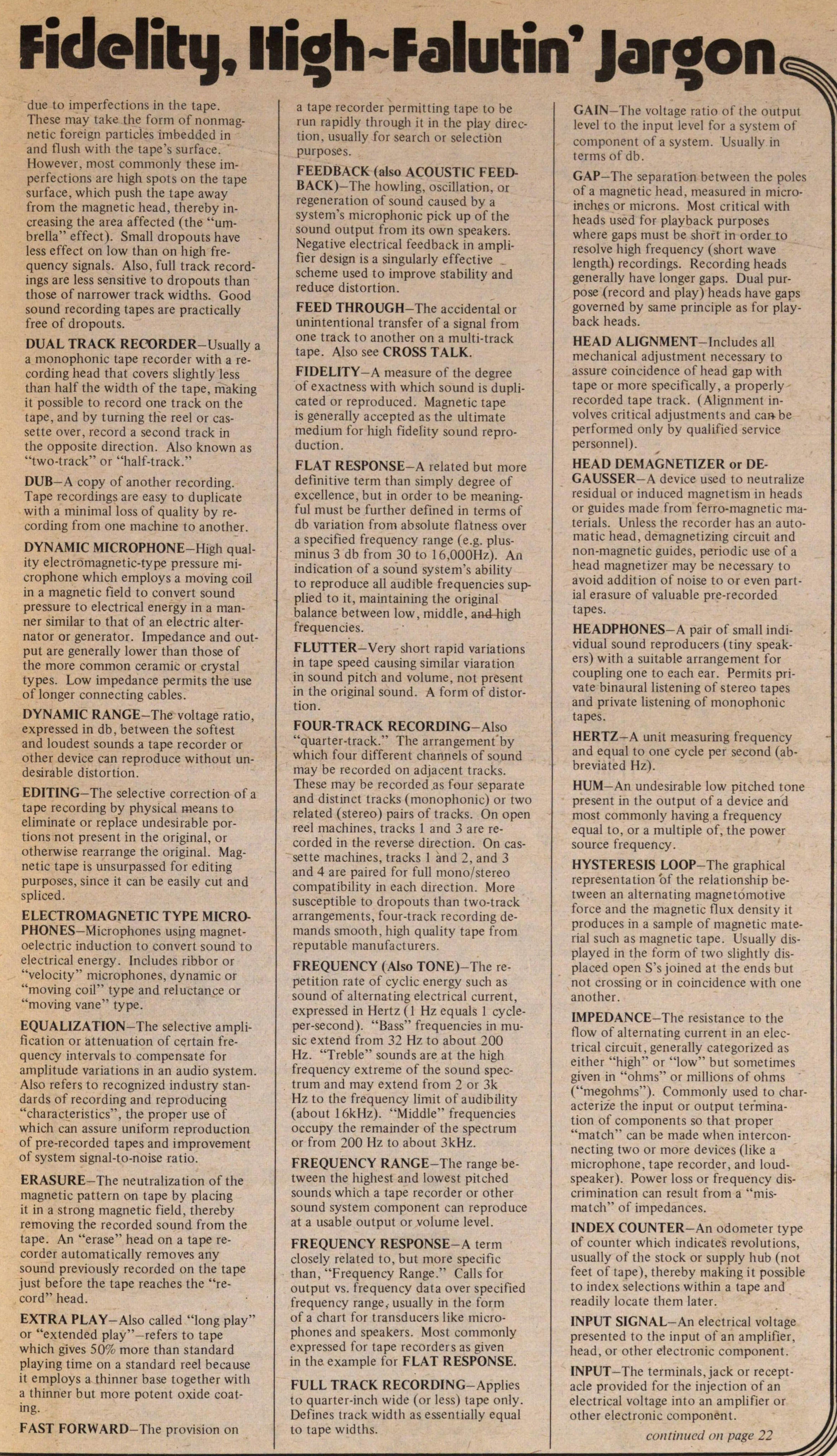 A Glossary of Hi-Fidelity, High-Falutin' Jargon

As you weave through the multitude of show exhibits, many pieces of intricately conceived paper will come your way chock full of barely comprehensible technical specifications on components, speakers and the like. To make the job of sorting through the maze a bit more decipherable, we present here a comprehensive glossary of high-fidelity terms. Thanks to the Philadelphia Drummer for this set of definitions.

ACETATE BASE-The transparent cellulose acetate plastic film which for years formed the base for most of the audible range magnetic recording tape made. Polyester base has become the standard in magnetic tape base because it is tough long lasting and relatively unaffected by moisture.

AMPLIFY-To strengthen a given electrical signal by increasing its amplitude, or raising its level- a sound term. The opposite of "attenuate."

ATTENUATE- To weaken a given electrical signal by reducing its level (usually by means of a volume or loudness control).

AUDIBLE TONES, also AUDIBLE FREQUENCIES-Sounds with wave frequencies which the average human can hear and which range from 30 to 16,000 Hertz.

AUTOMATIC SHUT-OFF-Special switch incorporated in some tape recorders which automatically stops the machine when a signal indicates the end of a recording when the end of the tape is reached.

BACKING or BASE-The flexible material, usually polyester (or cellulose acetate) which is used as the carrier for the magnetic oxide coating of magnetic tape.

BAFFLE- The panel upon which a loudspeaker is mounted, most commonly the front panel of an enclosure.

BIAS- A signal added intentionally during recording to compensate for the inherent nonlinearity of magnetic systems. It is an alternating current of high (beyond audibility) frequency, linearly added to the signal.

BULK ERASER or DEGAUSER- A device used to erase an entire roll of magnetic tape without removing it from its reel. Generally employs a strong alternating magnetic field to which the tape is exposed in a manner which neutralizes all previously recorded magnetic patterns.

CASSETTE- The compact cassette is a palm-sized unit housing a spool of magnetic tape and a take-up reel. Cassettes permit quick loading and give full mono/stereo compatibility.

CAPSTAN- The driven spindle or shaft in a tape recorder-sometimes - the motor shaft itself-which rotates against the tape, puiling it through the machine at constant speed during recording and playback modes of operation. lts rotational speed and diameter thus determine tape speed.

CHANNEL-A single, complete sound or signal path through a system.

COERCIVITY or INTRINSIC COERCIVITY- The demagnetizing force or field intensity required to reduce the induction of a piece of tape (exclusive of air induction effects) from saturation to zero. A figure merit for magnetic tape useful for comparing relative bias and erase field requirements. Usually expressed in oersteds.

CROSS TALK-The unintentional mixing of signals from one channel with those of another.

CROSSOVER NETWORK-In multiple loudspeaker systems a circuit employing electrical filters of frequency discriminating paths for routing high, low, and in some elaborate systems, middle frequencies, to the particular speakers designed to handle them.

DECIBEL-Abbreviated "db," it is a relative measure of sound intensity or "volume." It expresses the ratio of one sound intensity to another. One db is about the smallest change in sound volume that the human ear can detect. Also used to express, logarithmically, voltage and power ratios.

DISTORTION-Any difference between the original sound and that reproduced by a recording machine. Distortion takes on many forms, and although it can never be completely eliminated, it can be reduced to a minimum in a good recording and reproducing system. Tape offers the maximum potential for distortion-free recording.

DOLBY- A trade name for one type of noise-reduction system. Through a process of electronic encoding and decoding, dynamic range is increased by decreasing system and tape noise.

DOMAIN-In magnetic theory, that region of a magnetic material in which the spontaneous magnetization is all in one direction. In conventional magnetic tape coatings this corresponds to one oxide particle.

DROPOUT-During playback, the instantaneous loss of a recorded signal due to ïmperfections in the tape. These may take the form of nonmagnetic foreign particles imbedded in and flush with the tape 's surface. However, most commonly these imperfections are high spots on the tape surface, which push the tape away from the magnetic head, thereby increasing the area affected (the "umbrella" effect). Small dropouts have less effect on low than on high frequency signals. Also, full track recordings are less sensitive to dropouts than those of narrower track widths. Good sound recording tapes are practically free of dropouts.

DUAL TRACK RECORDER-Usually a a monophonic tape recorder with a recording head that covers slightly less than half the width of the tape, making it possible to record one track on the tape, and by turning the reel or cassette over, record a second track in the opposite direction. Also known as "two-track" or "half-track."

DUB.A copy of another recording. Tape recordings are easy to duplicate with a minimal loss of quality by recording from one machine to another.

DYNAMIC MICROPHONE-High quality electromagnetic-type pressure microphone which employs a moving coil in a magnetic field to convert sound pressure to electrical energy in a manner similar to that of an electric alternator or generator. Impedance and output are generally lower than those of the more common ceramic or crystal types. Low impedance permits the use of longer connecting cables.

DYNAMIC RANGE-The voltage ratio, expressed in db, between the softest and loudest sounds a tape recorder or other device can reproduce without undesirable distortion.

EDITING-The selective correction of a tape recording by physical means to eliminate or replace undesirable portions not present in the original, or otherwise rearrange the original. Magnetic tape is unsurpassed for editing purposes, since it can be easily cut and spliced.

EQUALIZATION-The selective amplification or attenuation of certain frequency intervals to compensate for amplitude variations in an audio system. Also refers to recognized industry standards of recording and reproducing "characteristics", the proper use of which can assure uniform reproduction of pre-recorded tapes and improvement of system signal-to-noise ratio.

ERASURE-The neutralization of the magnetic pattern on tape by placing it in a strong magnetic field, thereby removing the recorded sound from the tape. An "erase" head on a tape recorder automatically removes any sound previously recorded on the tape just before the tape reaches the "record" head.

EXTRA PLAY-Also called "long play" or "extended play"- refers to tape which gives 50% more than standard playing time on a standard reel because it employs a thinner base together with a thinner but more potent oxide coating.

FAST FORWARD-The provision on a tape recorder permitting tape to be run rapidly through it in the play direction. usually for search or selection purposes.

FEEDBACK (also ACOUSTIC FEEDBACK)- The howling, oscillation, or regeneration of sound caused by a system's microphonic pick up of the sound output from its own speakers. Negative electrical feedback in amplifier design is a singularly effective scheme used to improve stability and reduce distortion.

FEED THROUGH-The accidental or unintentional transfer of a signal from one track to another on a multi-track tape. Also see CROSS TALK.

FIDELITY-A measure of the degree of exactness with which sound is duplicated or reproduced. Magnetic tape is generally accepted as the ultimate medium for high fidelity sound reproduction.

FLAT RESPONSE-A related but more definitive term than simply degree of excellence, but in order to be meaningful must be further defined in terms of db variation from absolute flatness over a specified frequency range (e.g. plus-minus 3 db from 30 to 16,000Hz). An indication of a sound system's ability to reproduce all audible frequencies supplied to it, maintaining the original balance between low, middle, and-high frequencies.

FLUTTER- Very short rapid variations in tape speed causing similar variation in sound pitch and volume, not present in the original sound. A form of distortion.

FOUR-TRACK RECORDING-Also "quarter-track." The arrangement by which four different channels of sound may be recorded on adjacent tracks. These may be recorded as four separate and distinct tracks (monophonic) or two related (stereo) pairs of tracks. On open reel machines, tracks 1 and 3 are recorded in the reverse direction. On cassette machines, tracks 1 and 2, and 3 and 4 are paired for full mono/stereo compatibility in each direction. More susceptible to dropouts than two-track arrangements, four-track recording demands smooth, high quality tape from reputable manufacturers.

FREQUENCY (Also TONE)-The repetition rate of cyclic energy such as sound of alternating electrical current, expressed in Hertz (1 Hz equals 1 cycle per-second). "Bass" frequencies in music extend from 32 Hz to about 200 Hz. "Treble" sounds are at the high frequency extreme of the sound spectrum and may extend from 2 or 3k Hz to the frequency limit of audibility (about 16kHz). "Middle" frequencies occupy the remainder of the spectrum or from 200 Hz to about 3kHz.

FREQUENCY RANGE-The range between the highest and lowest pitched sounds which a tape recorder or other sound system component can reproduce at a usable output or volume Ievel.

FREQUENCY RESPONSE-A term closely related to, but more specific than, "Frequency Range." Calls for output vs. frequency data over specified frequency range, usually in the form of a chart for transducers like microphones and speakers. Most commonly expressed for tape recorders as given in the example for FLAT RESPONSE.

GAIN-The voltage ratio of the output level to the input level for a system of component of a system. Usually in terms of db.

GAP- The separation between the poles of a magnetic head, measured in microinches or microns. Most critical with heads used for playback purposes where gaps must be short in order to resolve high frequency (short wave length) recordings. Recording heads generally have longer gaps. Dual purpose (record and play) heads have gaps governed by same principle as for playback heads.

HEAD ALIGNMENT-Includes all mechanical adjustment necessary to assure coincidence of head gap with tape or more specifically, a properly recorded tape track. (Alignment involves critical adjustments and can be performed only by qualified service personnel).

HEAD DEMAGNETIZER or DEGAUSSER- A device used to neutralize residual or induced magnetism in heads or guides made from ferro-magnetic materials. Unless the recorder has an automatic head, demagnetizing circuit and non-magnetic guides, periodic use of a head magnetizer may be necessary to avoid addition of noise to or even partial erasure of valuable pre-recorded tapes.

HEADPHONES-A pair of small individual sound reproducers (tiny speakers) with a suitable arrangement for coupling one to each ear. Permits private binaural listening of stereo tapes and private listening of monophonic tapes.

HERTZ- A unit measuring frequency and equal to one cycle per second (abbreviated Hz).

HUM- An undesirable low pitched tone present in the output of a device and most commonly having a frequency equal to, or a multiple of, the power source frequency.

HYSTERESIS LOOP-The graphical representation of the relationship between an alternating magnetomotive force and the magnetic flux density it produces in a sample of magnetic material such as magnetic tape. Usually displayed in the form of two slightly displaced open S's joined at the ends but not crossing or in coincidence with one another.

IMPEDANCE-The resistance to the flow of alternating current in an electrical circuit, generally categorized as either "high" or "low" but sometimes given in "ohms" or millions of ohms ("megohms"). Commonly used to characterize the input or output termination of components so that proper "match" can be made when interconnecting two or more devices (like a microphone, tape recorder, and loudspeaker). Power loss or frequency discrimination can result from a "mismatch" of impedances.

INDEX An odometer type of counter which indicates revolutions, usually of the stock or supply hub (not feet of tape), thereby making it possible to index selections within a tape and readily locate them later.

INPUT SIGNAL-An electrical voltage presented to the input of an amplifier, head, or other electronic component.

INPUT- The terminals, jack or receptacle provided for the injection of an electrical voltage into an amplifier or other electronic component.