Supply The Addicts, Starve The Pushers 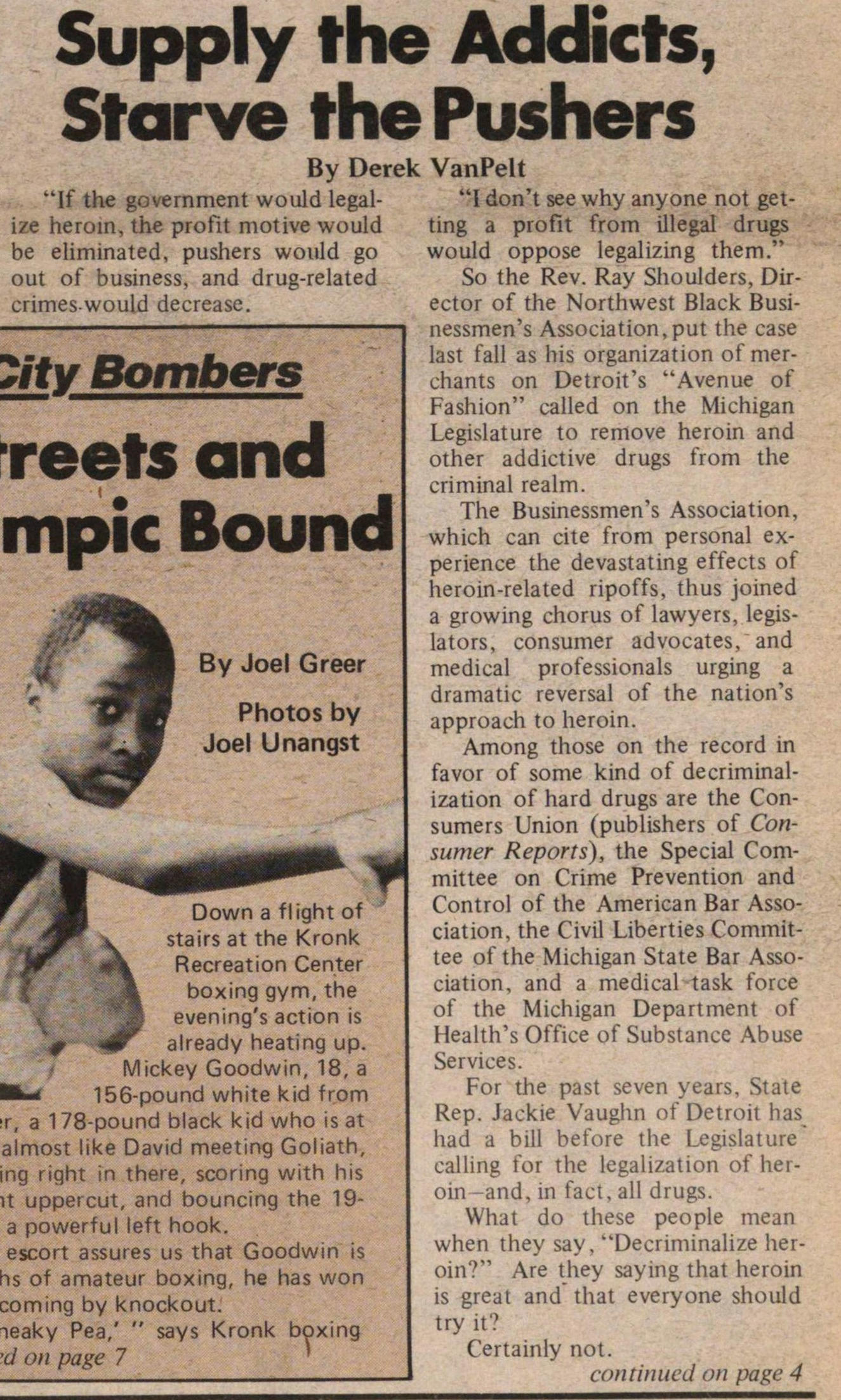 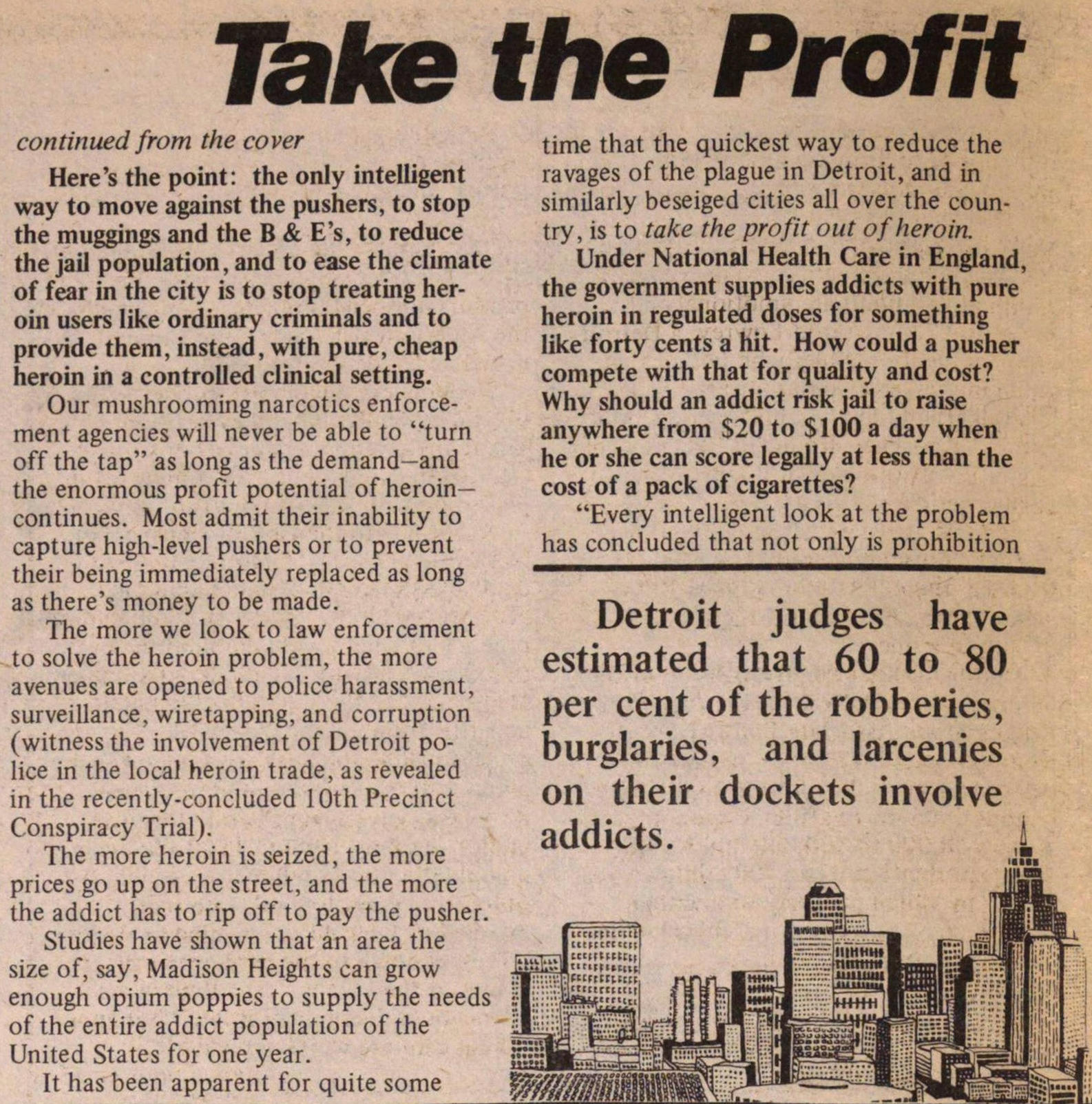 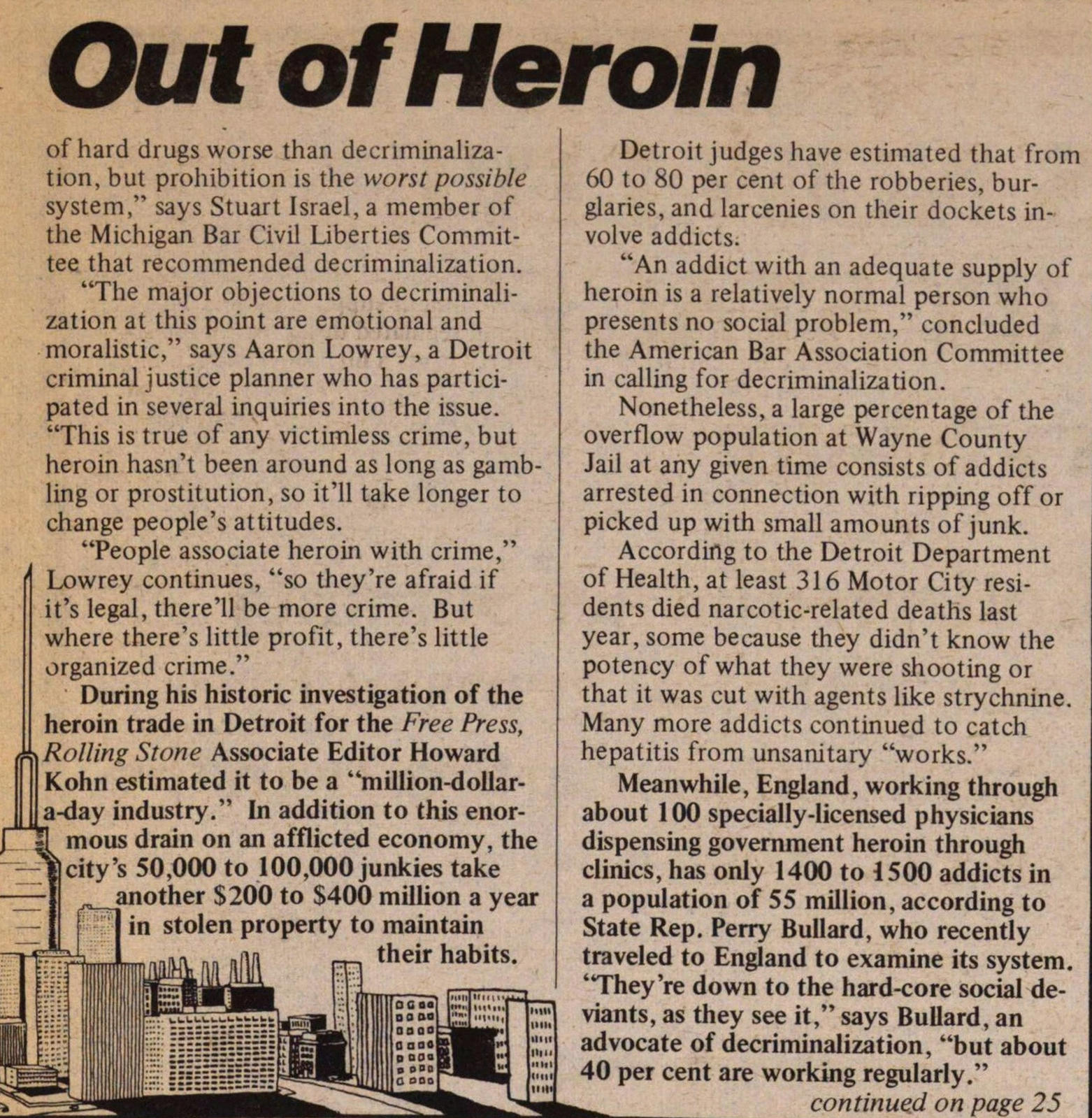 "If the government would legalize heroin, the profit motive would be eliminated, pushers would go out of business, and drug-related would decrease.

"I don't see why anyone not getting a profit from illegal drugs would oppose legalizing them."

So the Rev. Ray Shoulders, Director of the Northwest Black Businessmen's Association, put the case last fall as his organization of merchants on Detroit's "Avenue of Fashion" called on the Michigan Legislature to remove heroin and other addictive drugs from the criminal realm.

The Businessmen's Association, which can cite from personal experience the devastating effects of heroin-related rip offs, thus joined a growing chorus of lawyers, legislators, consumer advocates, and medical professionals urging a dramatic reversal of the nation's approach to heroin.

Among those on the record in favor of some kind of decriminalization of hard drugs are the Consumers Union (publishers of Consumer Reports), the Special Committee on Crime Prevention and Control of the American Bar Association, the Civil Liberties Committee of the Michigan State Bar Association, and a medical task force of the Michigan Department of Health's Office of Substance Abuse Services.

For the past seven years, State Rep. Jackie Vaughn of Detroit has had a bill before the Legislature calling for the legalization of heroin - and, in fact, all drugs.

What do these people mean when they say, "Decriminalize heroin?" Are they saying that heroin is great and that everyone should try it?

Here's the point: the only intelligent way to move against the pushers, to stop the muggings and the B & E's, to reduce the jail population, and to ease the climate of fear in the city is to stop treating heroin users like ordinary criminals and to provide them, instead, with pure, cheap heroin in a controlled clinical setting.

Our mushrooming narcotics enforcement agencies will never be able to "turn off the tap" as long as the demand - and the enormous profit potential of heroin - continues. Most admit their inability to capture high-level pushers or to prevent their being immediately replaced as long as there's money to be made.

The more we look to law enforcement to solve the heroin problem, the more avenues are opened to police harassment, surveillance, wiretapping, and corruption (witness the involvement of Detroit police in the local heroin trade, as revealed in the recently-concluded 10th Precinct Conspiracy Trial).

The more heroin is seized, the more prices go up on the street, and the more the addict has to rip off to pay the pusher.

Studies have shown that an area the size of, say, Madison Heights can grow enough opium poppies to supply the needs of the entire addict population of the United States for one year.

It has been apparent for quite some time that the quickest way to reduce the ravages of the plague in Detroit, and in similarly besieged cities all over the country, is to take the profit out of heroin.

Under National Health Care in England, the government supplies addicts with pure heroin in regulated doses for something like forty cents a hit. How could a pusher compete with that for quality and cost? Why should an addict risk jail to raise anywhere from $20 to  $100 a day when he or she can score legally at less than the cost of a pack of cigarettes?

"Every intelligent look at the problem has concluded that not only is prohibition of hard drugs worse than decriminalization, but prohibition is the worst possible system," says Stuart Israel, a member of the Michigan Bar Civil Liberties Committee that recommended decriminalization.

"The major objections to decriminalization at this point are emotional and moralistic," says Aaron Lowrey, a Detroit criminal justice planner who has participated in several inquiries into the issue. "This is true of any victimless crime, but heroin hasn't been around as long as gambling or prostitution, so it'll take longer to change people's attitudes.

"People associate heroin with crime," Lowrey continues, "so they're afraid if it's legal, there'll be more crime. But where there's little profit, there's little organized crime."

During his historic investigation of the heroin trade in Detroit for the Free Press, Rolling Stone Associate Editor Howard Kohn estimated it to be a "million-dollar-a-day industry." In addition to this enormous drain on an afflicted economy, the city's 50,000 to 100,000 junkies take another $200 to $400 million a year in stolen property to maintain their habits.

Detroit judges have estimated that from 60 to 80 per cent of the robberies, burglaries, and larcenies on their dockets involve addicts.

"An addict with an adequate supply of heroin is a relatively normal person who presents no social problem," concluded the American Bar Association Committee in calling for decriminalization.

Nonetheless, a large percentage of the overflow population at Wayne County Jail at any given time consists of addicts arrested in connection with ripping off or picked up with small amounts of junk.

According to the Detroit Department of Health, at least 316 Motor City residents died narcotic-related deaths last year, some because they didn't know the potency of what they were shooting or that it was cut with agents like strychnine. Many more addicts continued to catch hepatitis from unsanitary "works."

Meanwhile, England, working through about 100 specially-licensed physicians dispensing government heroin through clinics, has only 1400 to 1500 addicts in a population of 55 million. according to State Rep. Perry Bullard, who recently traveled to England to examine its system. "They're down to the hard-core social deviants, as they see it," says Bullard, an advocate of decriminalization, "but about 40 percent are working regularly."

"Heroin continues to be a significant social problem, not because of any intrinsic qualities, but because it is the object of a national criminal prohibition," say Israel and Detroit attorney Kenny Mogill in an article in U of D's Journal of Urban Law.

"The Controlled Substances Act (the model legislation adopted by Michigan and most other states) creates and exacerbates a significant problem which wouldn't exist without prohibition," insists Israel, who has challenged the law in court several times.

Contrary to popular belief, heroin in itself does no organic damage and is far less liable to produce instant addiction than most law enforcement spokespersons like to admit. Legally, however, heroin (not to mention marijuana) is classified as more dangerous than alcohol and nicotine, whose capacity for gross bodily harm are well-known.

This state of affairs dates back to the 1914 Harrison Act, which imposed the first federal controls on heroin. In the thirties, organized crime, looking for a new source of income following the repeal of alcohol prohibition, entered the heroin business.

The Federal Bureau of Narcotics, which was also gearing up its notorious anti-marijuana campaign, had already forced forty addict treatment centers across the country to close and made it impossible for doctors to prescribe maintenance doses for addicts. Although the myths created about weed by Harry Anslinger and company are laughable today, with decriminalization the clear trend nationwide, the image of heroin as an unbridled evil and of heroin users as killers and psychopaths still retains its hold on the popular imagination.

"It'll probably take five or ten years to get medical dispensation of heroin," says Rep. Bullard, "although it should be done now. It could come in three or four years if there were enough rational public discussion."

The junkie, obviously , would still be with us, although in steadily declining numbers, to judge by the English experience. "You'd need long-term individual counseling to work on that," says Clarice Jobes, a co-founder of the Cass Corridor's WOMAN Clinic for female addicts. "An addict has to be willing to make major changes in his or her life."

"You'd have to have a transitional period, during which there would undoubtedly be a 'gray market' of heroin diverted from the clinics," says Aaron Lowrey. "Many people continued to prefer moonshine after alcohol prohibition was repealed. There's a black market in meat, cigarettes, you name it. But at least you'd have a limited black market, and you could regulate it better."

Decriminalization, advocates agree, would have to be accompanied by a massive educational campaign on the facts about heroin, as well as a carefully-controlled dispensation program to guard against abuse by the government, as well as by addicts. The Consumers Union study suggests experimental pilot programs to determine the most effective methods of operation.

Dealing with addiction itself, Rep. Bullard suggests, means dealing with the conditions of life at rock bottom of the social pyramid. "Addicts are crippled by the slum culture," he says. "They see no way out of the urban ghettoes, particularly under high unemployment and a failing educational system. The most many can look forward to is welfare."

"Kids are attracted to the underground lifestyle of heroin," adds Stuart Israel, "because they see that the only person on the block wearing nice clothes and driving a big car is the pusher. So they emulate him."

Until those kids can hope for more than a needle to ease the pain of a dead-end existence, we could force the pushers to make an honest living and make the city a much more secure and less uptight place to live in by decriminalizing the possession and use of heroin in small amounts; dispensing pure heroin in controlled dosages at government clinics; and attacking the social and economic conditions that produce alienation and hopelessness in the junkie.

Eventually, the federal narcotics laws will have to change, but as they are doing with marijuana decriminalization and gun control, the states can force Washington to take notice. A system of national health care would bring us a step closer to England's success in controlling addiction.

Inevitably, the plague and its attendant evils cannot be separated from the society which has provided its most fertile soil, and whose values - particularly the glorification of profit by whatever means, and the aggrandizement of a few individuals at the infinite expense of the many - are so faithfully reflected in the sordid underworld of pushers, junkies, and narcotics police.

For anyone without a vital interest in the perpetuation of muggings, OD's, and hot-shot police drug squads, the only sane way to deal with the present nightmare, brought to us by the prohibition approach, is to simply take the profit out of heroin.