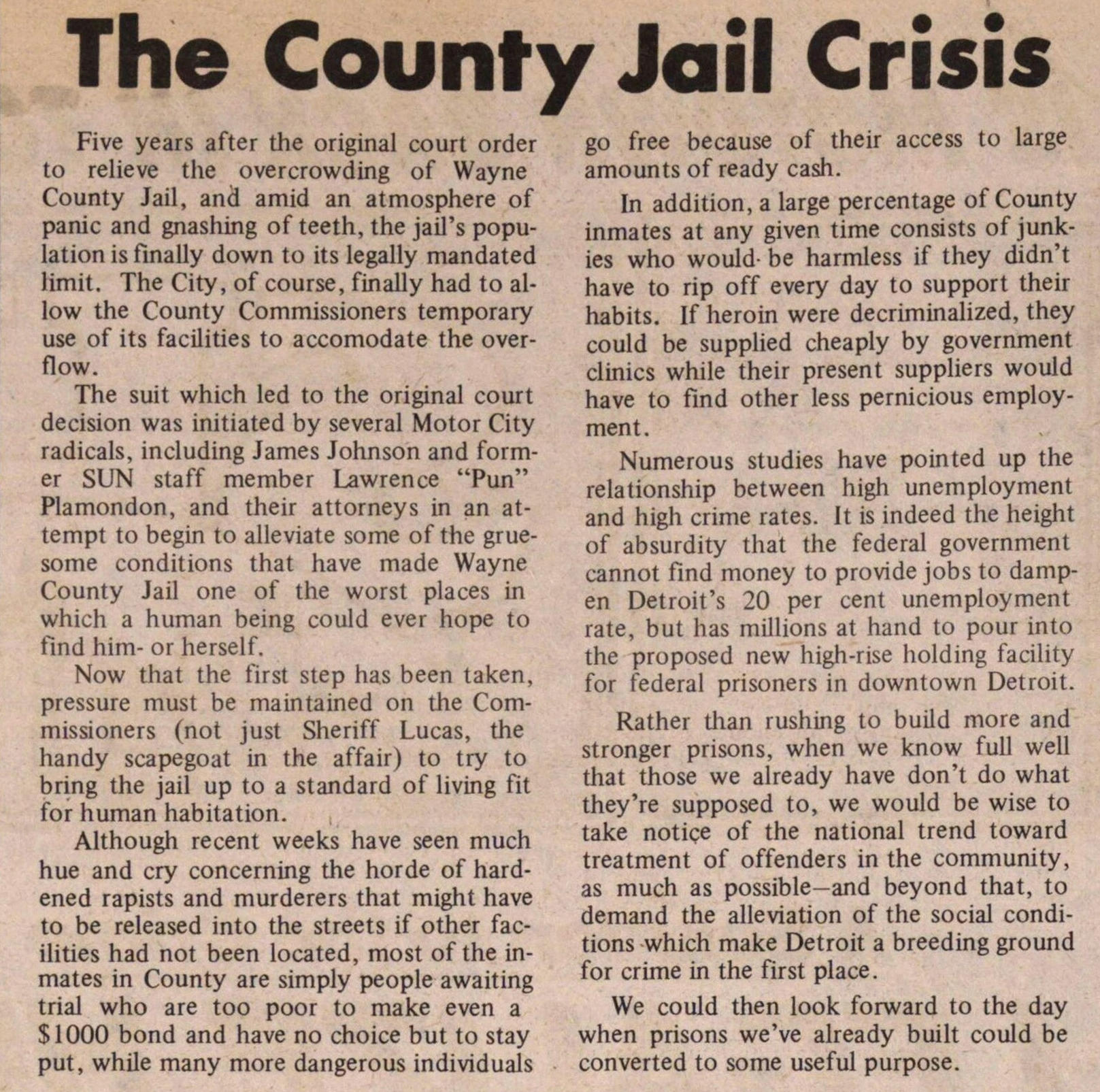 Five years alter the original court order to relieve the overcrowding of Wayne County Jail, and amid an atmosphere of panic and gnashing of teeth, the jail's population is finally down to its legally mandated limit. The City, of course, finally had to allow the County Commissioners temporary use of its facilities to accomodate the overflow.

The suit which led to the original court decision was initiated by several Motor City radicals, including James Johnson and former SUN staff member Lawrence "Pun" Plamondon, and their attorneys in an attempt to begin to alleviate some of the gruesome conditions that have made Wayne County Jail one of the worst places in which a human being could ever hope to find or herself.

Now that the first step has been taken, pressure must be maintained on the Commissioners (not just Sheriff Lucas, the handy scapegoat in the affair) to try to bring the jail up to a standard of living fit for human habitation.

Although recent weeks have seen much hue and cry concerning the horde of hardened rapists and murderers that might have to be released into the streets if other facilities had not been located, most of the inmates in County are simply people awaiting trial who are too poor to make even a $1000 bond and have no choice but to stay put, while many more dangerous individuals go free because of their access to large amounts of ready cash.

In addition, a large percentage of County inmates at any given time consists of junkies who would be  harmless if they didn't have to rip off every day to support their habits. If heroin were decriminalized, they could be supplied cheaply by government clinics while their present suppliers would have to find other less pernicious employment.

Numerous studies have pointed up the relationship between high unemployment and high crime rates. It is indeed the height of absurdity that the federal government cannot find money to provide jobs to dampen Detroit's 20 per cent unemployment rate, but has millions at hand to pour into the proposed new high-rise holding facility for federal prisoners in downtown Detroit.

Rather than rushing to build more and stronger prisons, when we know full well that those we already have don't do what they're supposed to, we would be wise to take notice of the national trend toward treatment of offenders in the community, as much as possible- and beyond that, to demand the alleviation of the social conditions which make Detroit a breeding ground for crime in the first place.

We could then look forward to the day when prisons we've already built could be converted to some useful purpose.