Will The Bankers Take Over Again In Ann Arbor? 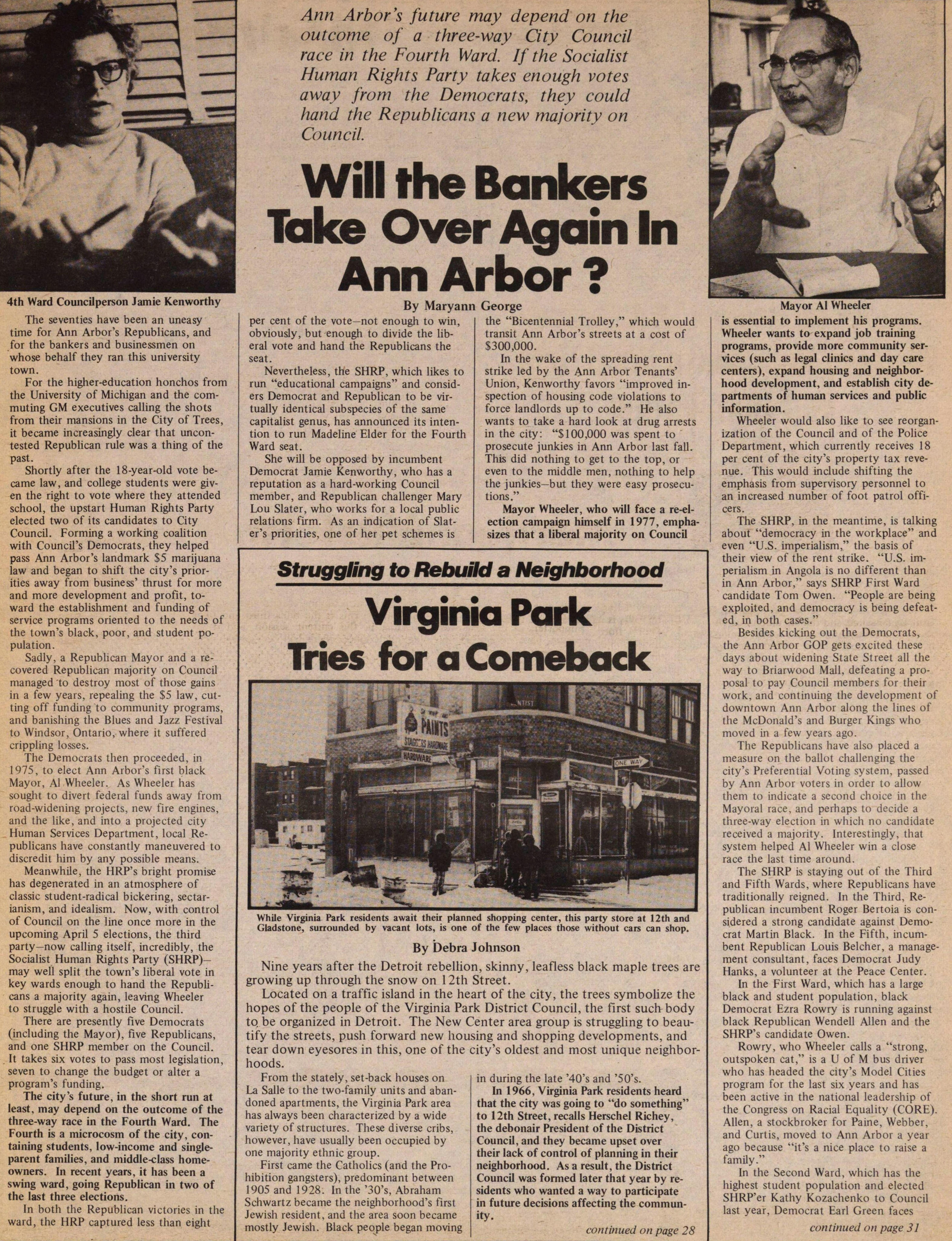 Ann Arbor's future may depend on the outcome of a three-way City Council race in the Fourth Ward. If the Socialist Human Rights Party takes enough votes away from the Democrats, they could hand the Republicans a new majority on Council.

The seventies have been an uneasy time for Ann Arbor's Republicans, and for the bankers and businessmen on whose behalf they ran this university town.

For the higher-education honchos from the University of Michigan and the commuting GM executives calling the shots from their mansions in the City of Trees, it became increasingly clear that uncontested Republican rule was a thing of the past.

Shortly after the 18-year-old vote became law, and college students were given the right to vote where they attended school, the upstart Human Rights Party elected two of its candidates to City Council. Forming a working coalition with Council's Democrats, they helped pass Ann Arbor's landmark $5 marijuana law and began to shift the city's priorities away from business' thrust for more and more development and profit, toward the establishment and funding of service programs oriented to the needs of the town's black, poor, and student population.

Sadly, a Republican Mayor and a recovered Republican majority on Council managed to destroy most of those gains in a few years, repealing the $5 law, cutting off funding to community programs, and banishing the Blues and Jazz Festival to Windsor, Ontario, where it suffered crippling losses.

The Democrats then proceeded, in 1975, to elect Ann Arbor's first black Mayor, Al Wheeler. As Wheeler has sought to divert federal funds away from road-widening projects, new fire engines, and the like, and into a projected city Human Services Department, local Republicans have constantly maneuvered to discredit him by any possible means.

Meanwhile, the HRP's bright promise has degenerated in an atmosphere of classic student-radical bickering, sectarianism, and idealism. Now, with control of Council on the line once more in the upcoming April 5 elections, the third party - now calling itself, incredibly, the Socialist Human Rights Party (SHRP) - may well split the town's liberal vote in key wards enough to hand the Republicans a majority again, leaving Wheeler to struggle with a hostile Council.

There are presently five Democrats (including the Mayor), five Republicans, and one SHRP member on the Council. It takes six votes to pass most legislation, seven to change the budget or alter a program's funding.

The city's future, in the short run at least, may depend on the outcome of the three-way race in the Fourth Ward. The Fourth is a microcosm of the city, containing students, low-income and single-parent families, and middle-class homeowners. In recent years, it has been a swing ward, going Republican in two of the last three elections.

In both the Republican victories in the ward, the HRP captured less than eight per cent of the vote-not enough to win, obviously, but enough to divide the liberal vote and hand the Republicans the seat.

Nevertheless, the SHRP, which likes to run "educational campaigns" and considers Democrat and Republican to be virtually identical subspecies of the same capitalist genus, has announced its intention to run Madeline Elder for the Fourth Ward seat.

She will be opposed by incumbent Democrat Jamie Kenworthy, who has a reputation as a hard-working Council member, and Republican challenger Mary Lou Slater, who works for a local public relations firm. As an indication of Slater's priorities, one of her pet schemes is the "Bicentennial Trolley," which would transit Ann Arbor's streets at a cost of $300,000.

In the wake of the spreading rent strike led by the Ann Arbor Tenants' Union, Kenworthy favors "improved inspection of housing code violations to force landlords up to code." He also wants to take a hard look at drug arrests in the city: "$100,000 was spent to prosecute junkies in Ann Arbor last fall. This did nothing to get to the top, or even to the middle men, nothing to help the junkies- but they were easy prosecutions."

Mayor Wheeler, who will face a re-election campaign himself in 1977, emphasizes that a liberal majority on Council is essential to implement his programs. Wheeler wants to expand job training programs, provide more community services (such as legal clinics and day care centers), expand housing and neighborhood development, and establish city departments of human services and public information.

Wheeler would also like to see reorganization of the Council and of the Police Department, which currently receives 18 per cent of the city's property tax revenue. This would include shifting the emphasis from supervisory personnel to an increased number of foot patrol officers.

The SHRP, in the meantime, is talking about "democracy in the workplace" and even "U.S. imperialism," the basis of their view of the rent strike. "U.S. imperialism in Angola is no different than in Ann Arbor," says SHRP First Ward candidate Torn Owen. "People are being exploited, and democracy is being defeated, in both cases."

Besides kicking out the Democrats, the Ann Arbor GOP gets excited these days about widening State Street all the way to Briarwood Mall, defeating a proposal to pay Council members for their work, and continuing the development of downtown Ann Arbor along the lines of the McDonald's and Burger Kings who moved in a few years ago.

The Republicans have also placed a measure on the ballot challenging the city's Preferential Voting system, passed by Ann Arbor voters in order to allow them to indicate a second choice in the Mayoral race, and perhaps to decide a three-way election in which no candidate received a majority. Interestingly, that system helped Al Wheeler win a close race the last time around.

The SHRP is staying out of the Third and Fifth Wards, where Republicans have traditionally reigned. In the Third, Republican incumbent Roger Bertoia is considered a strong candidate against Democrat Martin Black. In the Fifth, incumbent Republican Louis Belcher, a management consultant, faces Democrat Judy Hanks, a volunteer at the Peace Center.

In the First Ward, which has a large black and student population, black Democrat Ezra Rowry is running against black Republican Wendell Allen and the SHRP's candidate Owen.

Rowry, who Wheeler calls a "strong, outspoken cat," is a U of M bus driver who has headed the city's Model Cities program for the last six years and has been active in the national leadership of the Congress on Racial Equality (CORE). Allen, a stockbroker for Paine, Webber, and Curtis, moved to Ann Arbor a year ago because "it's a nice place to raise a family."

Political observers warn that Republican voters may turn out in droves to overturn the Preferential Voting system and defeat a millage issue for road repairs, while many students stay home for lack of an exciting ballot issue like the $5 marijuana ordinance.

Wheeler and Kenworthy both caution that a Republican takeover of Council would bring abandonment of human services programs and increased expenditures on hardware and commercial development.

The deadline for voter registration in Ann Arbor is March 8. Citizens can register at the City Clerk's office on the second floor of City Hall or at the Ann Arbor Public library at South Fifth and William. Those who register will also be able to vote in the Michigan Presidential primary on May 17.

Maryann George, a graduate of the University of Michigan's journalism program, is a free-lance writer based in Ann Arbor.