Struggling To Rebuild A Neighborhood Virginia Park Tries For A Comeback 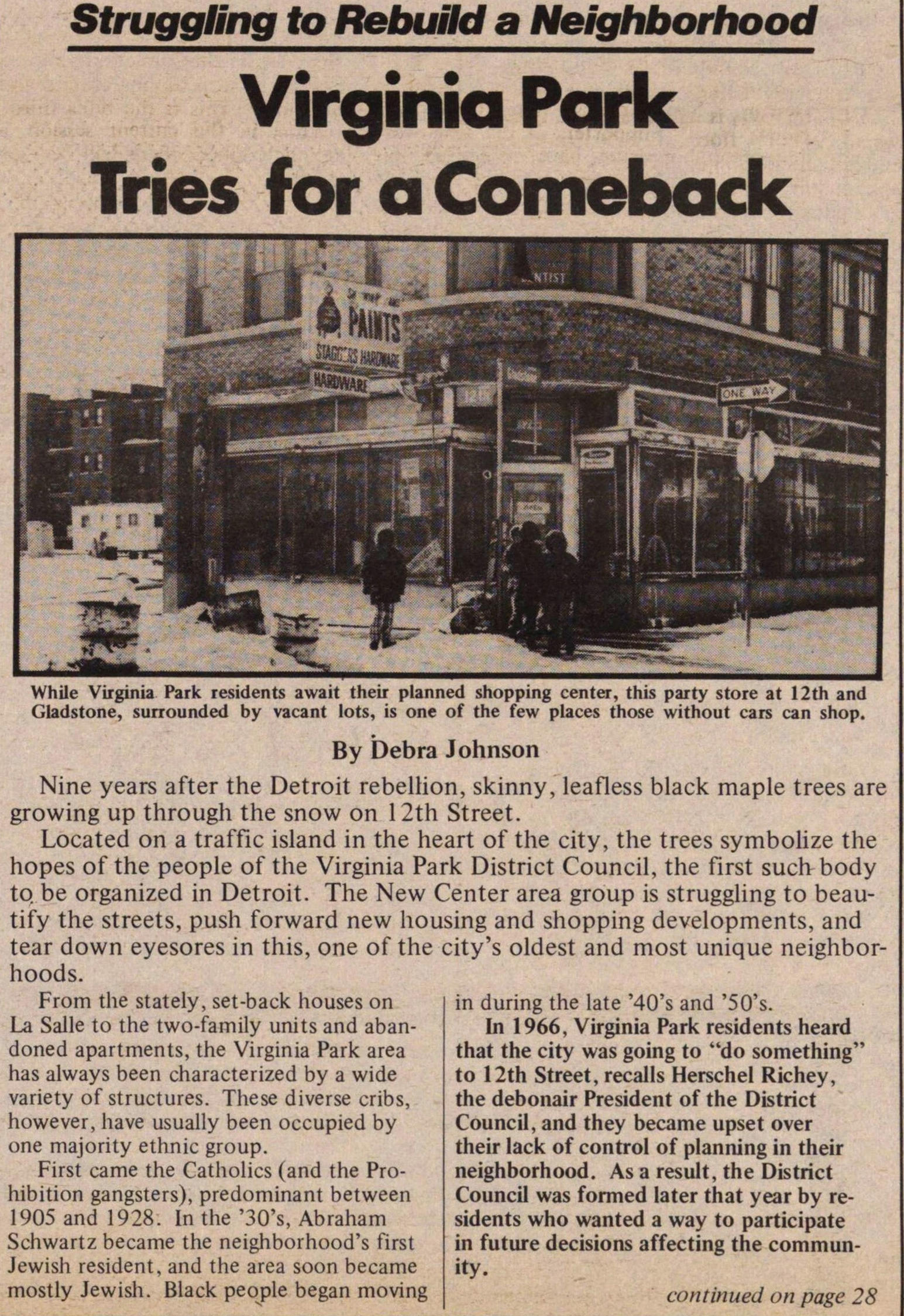 Nine years after the Detroit rebellion, skinny, leafless black maple trees are growing up through the snow on 12th Street.

Located on a traffic island in the heart of the city, the trees symbolize the hopes of the people of the Virginia Park District Council, the first such body to be organized in Detroit. The New Center area group is struggling to beautify the streets, push forward new housing and shopping developments, and tear down eyesores in this, one of the city's oldest and most unique neighborhoods.

From the stately, set-back houses on La Salle to the two-family units and abandoned apartments, the Virginia Park area has always been characterized by a wide variety of structures. These diverse cribs, however, have usually been occupied by one majority ethnic group.

First came the Catholics (and the Prohibition gangsters), predominant between 1905 and 1928. In the '30's, Abraham Schwartz became the neighborhood's first Jewish resident, and the area soon became mostly Jewish. Black people began moving in during the late '40's and '50's.

In 1966, Virginia Park residents heard that the city was going to "do something" to 12th Street, recalls Herschel Richey, the debonair President of the District Council, and they became upset over their lack of control of planning in their neighborhood. As a result, the District Council was formed later that year by residents who wanted a way to participate in future decisions affecting the community.

Meanwhile, the Great Rebellion of 1967 did have one positive effect on the area - the flames had cleared away some of the buildings slated for demolition. Unfortunately, many local 12th Street businesses were also destroyed, or else discouraged, at least.

Even before the riots, however, Virginia Park - once a fashionable neighborhood with a 12th Street "strip" - had grown older. Many houses had deteriorated, and many businesses had disappeared.

After taking a long, honest look at their community of 22,000 people, the District Council decided to focus on the neighborhood's lack of shopping and recreational facilities; the shortage of means for low-income residents to improve their homes; and the large number of abandoned buildings threatening the beauty and safety of the community.

To implement its plans, the Council came up with a Federal community development block. grant administered by the City, which pro vides some matching funds.

The Council's plan includes a badly-needed shopping center to be built at 12th and Euclid, complete with a major supermarket, a first-class restaurant, a barber shop, a hardware store, and 23 other different businesses.

The plan also allows for several lots and playgrounds to augment the three elementary school playgrounds which currently make up the neighborhood's recreational facilities, as well as a dozen "green spots" to help beautify the area.

Although this ambitious plan has existed for eight years, and the City has already cleared most of the necessary space, the District Council-although still strong and still fighting - has yet to break ground on any construction. Action has been delayed by bureaucratic hassling, conservative Federal policies, a lack of private funds, and several other unforeseen obstacles.

Part of the blame must go to the Michigan State Housing Authority, which requires proposed developments to undergo a complex fourteen-step procedure before construction can begin. Nixon's 1972 freeze of Federal housing funds didn't help, either.

Available public funds have not kept pace with inflation. "This began as a $30 million project, and the cost is three times that now," complains a Virginia Park Council staff member. "So how much can you do getting $3 or $4 million a year? We can only acquire so much property and do so much relocation each year."

After eight years of processing, groundbreaking ceremonies for the 12th Street townhouses are finally planned for this spring, and the entire project will hopefully be completed by 1981. That's a long time, compared to projects like Northland Shopping Center, a private development which grew from its original planning in 1949 to a spring opening in only six years.

Virginia Park's own planned shopping center, a keystone of the redevelopment program, is another story. Although there is a waiting list of commercial tenants for most of the available spaces, according to Richey, "It seems like big supermarkets are trying to get out of the inner city."

It's been difficult, too, to attract enough investors for the center. The Virginia Park Investment Association, a group of residents who have put up $360 each for the minimum four shares, doesn't have enough money to hire a developer. If the current stagnation continues, the investment group may have to request assistance from the Small Business Association.

As a result of the District Council's initiative, the City has been sponsoring a Loan and Grant program for improvements on homes in the neighborhood. Residents can get a 3 per cent loan, or even an outright grant (if the household earns less than $3500 a year), but many people who qualify for the grants have not even applied, due to lack of publicity.

Some of those who have made use of the program have been disappointed in the results. There have been loud and frequent complaints about contractors doing shoddy jobs, using cheap equipment, and taking too long to finish work. One resident fumes about having had to get up early to wait for a contractor who never showed. The 90-day job wasn't finished until a year later.

Now, the Council is making an effort to identify inferior contractors and eliminate them from the program.

Despite such obstacles, the Council shows no signs of losing the patience and determination that have brought its plans for Virginia Park this far. It enjoys considerable support among the residents, who turn out in large numbers for the quarterly meetings.

'To someone who sees the neighborhood now," Annie continues, "I would say, parts of it might look kind of bad. But come back in a year. You'll see a new housing development, new stores. You'll see an improvement."