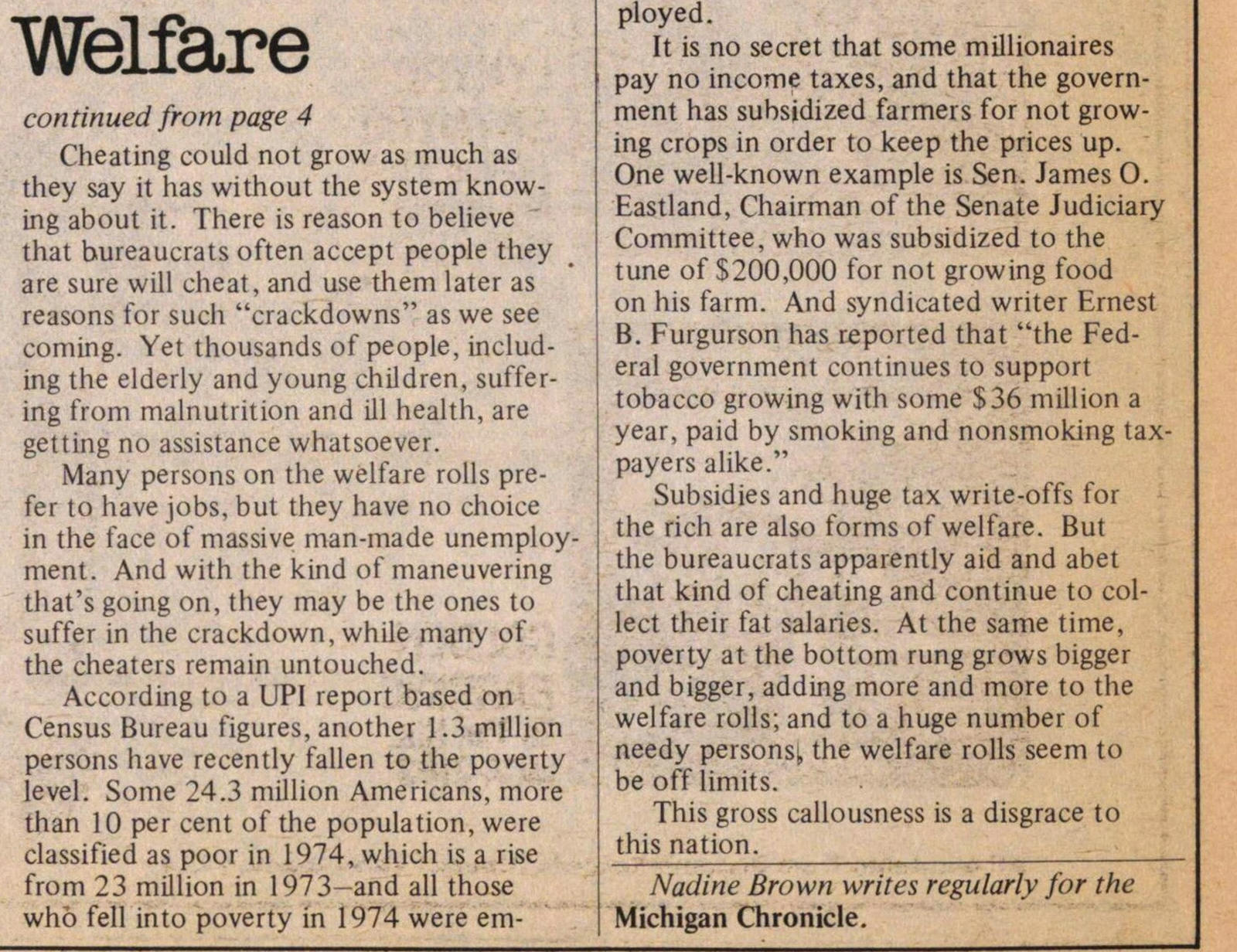 The much-talked-of crackdown on welfare cheats was given the green light when the Michigan Legislature adopted a bill Feb. 1 authorizing the State to take over the General Assistance portion of the welfare program and to apply tighter restrictions. General Assistance recipients include childless couples and others who do not qualify for programs like ADC.

It took only a few days for John Dempsey, director of the State Department of Social Services, to map out his plans to begin interviewing some 60,000 or more recipients in the General Assistance category.

Significantly, the "tighter restrictions" will be centered on the state's four largest counties, of which Wayne is Number One and reportedly has the most people on its welfare rolls and the greatest number of blacks. According to Charlie Brown of the Social Services Department, there are 70,000 on welfare in Wayne County.

One thing is certain: if the so-called interviews follow some of the current patterns on the local level, recipients can expect to be humiliated by the state interviewers. Many people were shocked last February, when nearly three dozen persons told Common Council of the degrading treatment they received at food stamp centers.

A white woman, the divorced mother of two children, told of applying only for food stamps to supplement her meager wages, not welfare money. The interviewer asked if her husband was the father of the children, despite the fact that she had stated on her application that he was. Then, she said, the woman told her that she was also divorced, but that she preferred to work, rather than ask for "charity."

Another woman, who said her husband had deserted the family, told of being humiliated each time she went to the center for food stamps (so that her child could have the special foods her doctor had prescribed). "It seems that the bureaucrats are at war with poor people," she said. Several others said they had to make repeated trips before they received food stamps, and some simply gave up.

When contacted Friday, Brown said the interviews planned by Dempsey are to be completed in the next couple of months, and according to a letter he had just received from Dempsey, the aim of the legislation is to phase the General Assistance part of the welfare program away from the counties in the next three years. 'To accommodate the growth in workload," he said, "staffing will require an additional $9.4 million or more."

General Assistance is not the only area in the welfare program that is due for overhaul, however. Almost on the heels of that action, a hearing on welfare reform, chaired by State Sen. John Otterbacher, Chairman of the Senate Public Health Committee, was held in Detroit Friday to gain support for Senate Bill 1237, which he sponsors. The hearing was held in the City-County Building Auditorium.

"There are sleepers in that bill," Ms. Mahaffey said during an interview prior to testifying. "For instance, in the old welfare code, the state has the responsibility to insure a standard of decency for citizens. But the new Bill 1237 makes no mention of that. Although there are provisions for going after provider fraud, such as doctors and nursing homes who pad their bills, the Senate measure requires that a welfare recipient be for need to work off their relief pay," she said. "With the job situation as it is, we don 't need that. What we do need is the creation of more jobs."

During an earlier interview with Councilwoman Erma Henderson regarding the bill, she emphasized, 'They are still doing the same thing they've always done whenever there's a crisis in employment. They start a decoy operation by pointing out cheats. But the people who really get the welfare are the rich, such as Lockheed, American Airlines, and Penn Central Railroad, who get millions of dollars while the little guy gets rooked if he gets a little more than he is supposed to.

"I'm afraid it's becoming a witch-hunt," she said. "But in the black community, it's always been that way, and it's not the black community that receives the most welfare money. When they selected the four largest counties for tight restriction, which has to mean Wayne, where most of the black people on welfare are, that should tell us something. We have to watch this very carefully."

Cheating could not grow as much as they say it has without the system knowing about it. There is reason to believe that bureaucrats often accept people they are sure will cheat, and use them later as reasons for such "crackdowns" as we see coming. Yet thousands of people, including the elderly and young children, suffering from malnutrition and ill health, are getting no assistance whatsoever.

Many persons on the welfare rolls prefer to have jobs, but they have no choice in the face of massive man-made unemployment. And with the kind of maneuvering that's going on, they may be the ones to suffer in the crackdown, while many of the cheaters remain untouched.

According to a UPI report based on Census Bureau figures, another 1.3 million persons have recently fallen to the poverty level. Some 24.3 million Americans, more than 10 per cent of the population, were classified as poor in 1974, which is a rise from 23 million in 1973 - and all those who fell into poverty in 1974 were employed.

It is no secret that some millionaires pay no income taxes, and that the government has subsidized farmers for not growing crops in order to keep the prices up. One well-known example is Sen. James O. Eastland, Chairman of the Senate Judiciary Committee, who was subsidized to the tune of $200,000 for not growing food on his farm. And syndicated writer Ernest B. Furgurson has reported that "the Federal government continues to support tobacco growing with some $36 million a year, paid by smoking and nonsmoking taxpayers alike."

Subsidies and huge tax write-offs for the rich are also forms of welfare. But the bureaucrats apparently aid and abet that kind of cheating and continue to collect their fat salaries. At the same time, poverty at the bottom rung grows bigger and bigger, adding more and more to the welfare rolls; and to a huge number of needy persons the welfare rolls seem to be off limits.

This gross callousness is a disgrace to this nation.