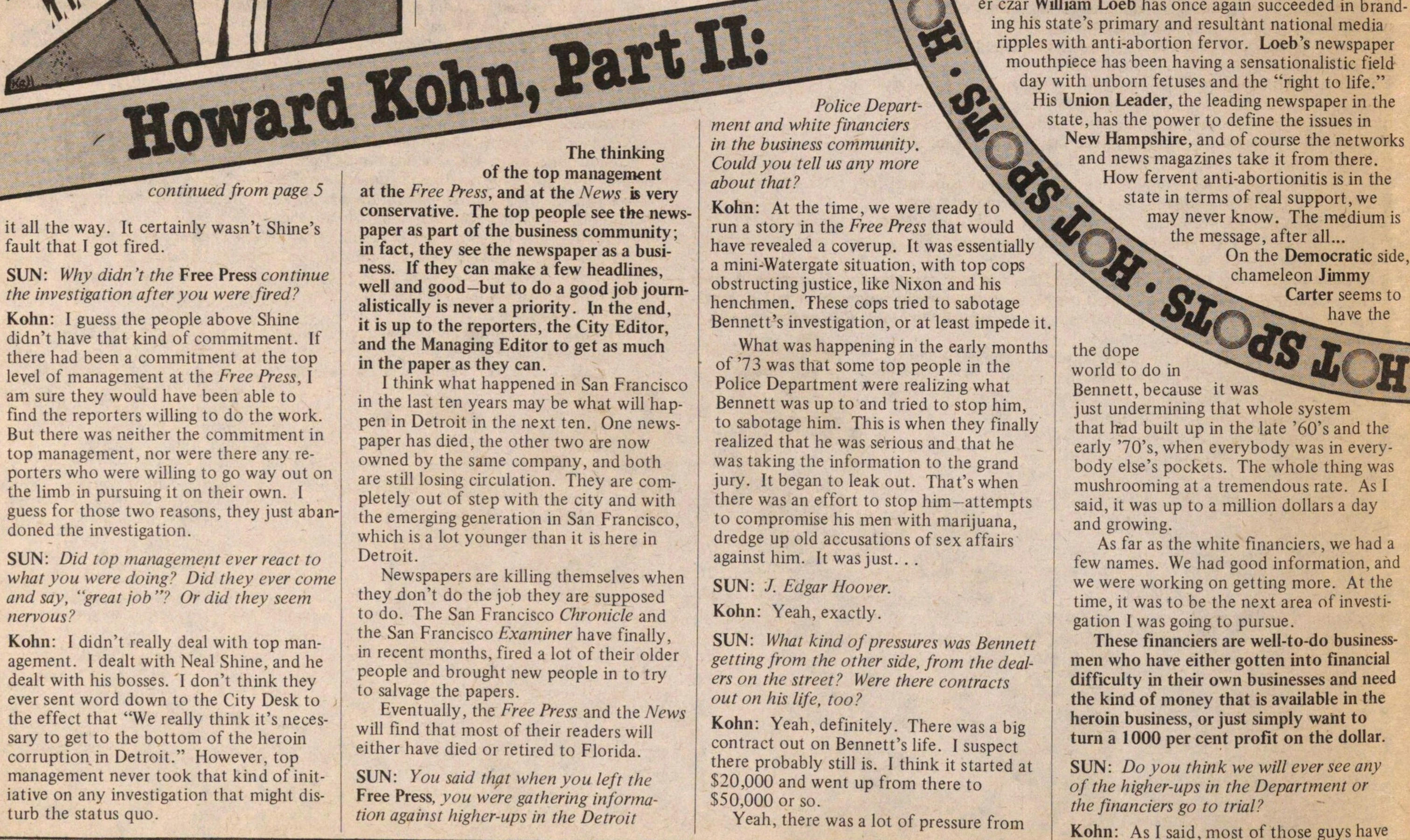 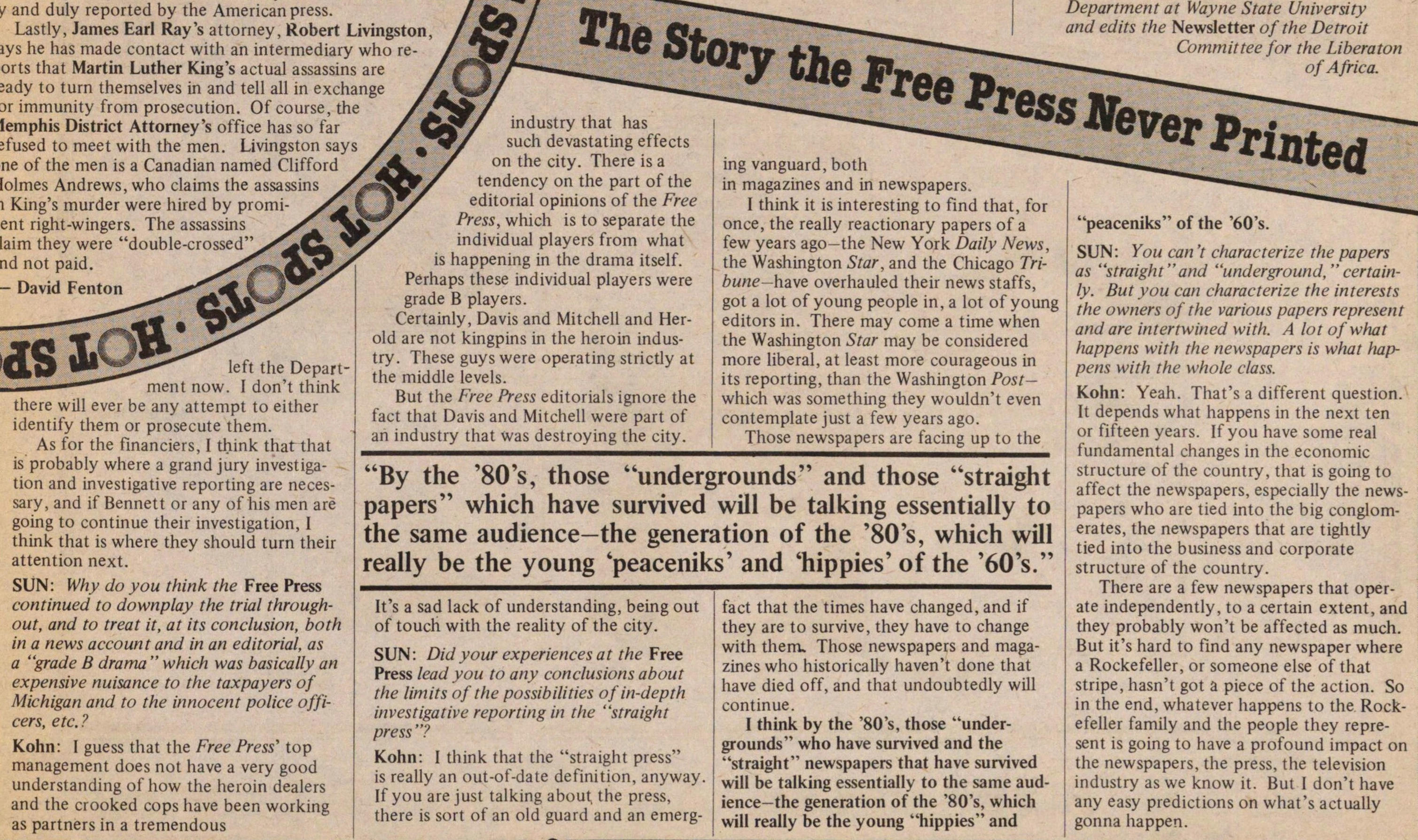 Those of you who were with us for Part I of our interview with Howard Kohn, former ace investigative reporter for the Detroit Free Press and now an Associate Editor at Rolling Stone, will recall how in 1972 Kohn decided to launch a full-scale investigation of the heroin trade in the Motor City. For several months, Kohn carefully developed informants and gathered information until finally, in April 1973, he was able to on page one of the Freep - Detroit's major heroin dealers, along with the names of several police officers deeply involved in the illicit trade.

Unfortunately, as Kohn recounted to SUN Editor Derek VanPelt and Publisher David Fenton, his investigation was cut short just as it promised to reach into the higher echelons of the Police Department and even into the white business community. In an effort Kohn still feels originated in the Police Department, the reporter was kidnapped with his own gun and pressured to reveal his sources. After escaping the ordeal, the besieged newsman made the mistake of lying about the gun on the police report and was fired by the Free Press, which promptly dropped the investigation.

Fortunately for Detroit, Lt. George Bennett, now Deputy Chief was pursuing his own parallel investigation into police corruption in the heroin trade-which finally resulted in the indictment of nine of Detroit's finest, along with six civilians, for selling narcotics and obstructing justice. Those indictments, in turn, led to the historic 10th Precinct Conspiracy Trial, which finally ended in December with the conviction of three cops and five civilians, thus vindicating in no small way Kohn 's often-contested credibility.

In the concluding segment of our interview, Howard reveals, for the first time, the story that might have been: the Watergate-style coverup within the Police Department and the bankrolling of the heroin trade by wealthy white businessmen. He talks about the reasons behind the Free Press' dropping its hottest story, and discusses the implications of his experience for the future of the Free Press and other urban dailies who continue to be "out of touch with the reality" of their cities.

SUN: Previous to your kidnapping, was the Free Press offering you a lot of support?

Kohn: Yeah, Neil Shine, who is the Managing Editor, supported the investigation all the way down the line. He was willing to put the Free Press' name on it. We spent two years doing it all, so we got to know the information pretty well. We were confident. There was no doubt about the information at the time, when it was printed.

But he was also willing to go beyond it, to continue the investigation to the top levels of the Police Department and into the kind of white financiers who were bankrolling a lot of the dope operations. We were going to move into that direction next. I have no doubts that he supported it all the way. It certainly wasn't Shine's fault that I got fired.

SUN: Why didn't the Free Press continue the investigation after you were fired?

Kohn: I guess the people above Shine didn't have that kind of commitment. If there had been a commitment at the top level of management at the Free Press, I am sure they would have been able to find the reporters willing to do the work. But there was neither the commitment in top management, nor were there any reporters who were willing to go way out on the limb in pursuing it on their own. I guess for those two reasons, they just abandoned the investigation.

SUN: Did top management ever react to what you were doing? Did they ever come and say, "great job"? Or did they seem nervous?

Kohn: I didn't really deal with top management. I dealt with Neal Shine, and he dealt with his bosses. I don't think they ever sent word down to the City Desk to the effect that "We really think it's necessary to get to the bottom of the heroin corruption in Detroit." However, top management never took that kind of initiative on any investigation that might disturb the status quo.

The thinking of the top management at the Free Press, and at the News is very conservative. The top people see the newspaper as part of the business community; in fact, they see the newspaper as a business. If they can make a few headlines, well and good - but to do a good job journalistically is never a priority. In the end, it is up to the reporters, the City Editor, and the Managing Editor to get as much in the paper as they can.

I think what happened in San Francisco in the last ten years may be what will happen in Detroit in the next ten. One newspaper has died, the other two are now owned by the same company, and both are still losing circulation. They are completely out of step with the city and with the emerging generation in San Francisco, which is a lot younger than it is here in Detroit.

Newspapers are killing themselves when they don't do the job they are supposed to do. The San Francisco Chronicle and the San Francisco Examiner have finally, in recent months, fired a lot of their older people and brought new people in to try to salvage the papers.

Eventually, the Free Press and the News will find that most of their readers will either have died or retired to Florida.

SUN: You said that when you left the Free Press, you were gathering information against higher-ups in the Detroit Police department and white financiers in the business community. Could you tell us any more about that?

Kohn: At the time, we were ready to run a story in the Free Press that would have revealed a coverup. It was essentially a mini-Watergate situation, with top cops obstructing justice, like Nixon and his henchmen. These cops tried to sabotage Bennett's investigation, or at least impede it.

What was happening in the early months of '73 was that some top people in the Police Department were realizing what Bennett was up to and tried to stop him, to sabotage him. This is when they finally; realized that he was serious and that he was taking the information to the grand jury. It began to leak out. That's when there was an effort to stop him - attempts to compromise his men with marijuana, dredge up old accusations of sex affairs against him. It was just...

SUN: What kind of pressures was Bennett getting from the other side, from the dealers on the street? Were there contracts out on his life, too?

Kohn: Yeah, definitely. There was a big contract out on Bennett's life. I suspect there probably still is. I think it started at $20,000 and went up from there to $50,000 or so.

Yeah, there was a lot of pressure from the dope world to do in Bennett, because it was just undermining that whole system that had built up in the late '60's and the early '70's, when everybody was in everybody else's pockets. The whole thing was mushrooming at a tremendous rate. As I said, it was up to a million dollars a day and growing.

As far as the white financiers, we had a few names. We had good information, and we were working on getting more. At the time, it was to be the next area of investigation I was going to pursue.

These financiers are well-to-do businessmen who have either gotten into financial difficulty in their own businesses and need the kind of money that is available in the heroin business, or just simply want to turn a 1000 per cent profit on the dollar.

SUN: Do you think we will ever see any of the higher-ups in the Department or the financiers go to trial?

Kohn: As I said. most of those guys have left the department now. I don't think there will ever be any attempt to either identify them or prosecute them. As for the financiers, I think that that is probably where a grand jury investigation and investigative reporting are necessary, and if Bennett or any of his men are going to continue their investigation, I think that is where they should turn their attention next.

SUN: Why do you think the Free Press continued to downplay the trial throughout, and to treat it, at its conclusion, both in a news account and in an editorial, as a "grade B drama " which was basically an expensive nuisance to the taxpayers of Michigan and to the innocent police officers, etc.?

Kohn: I guess that the Free Press' top management does not have a very good understanding of how the heroin dealers and the crooked cops have been working as partners in a tremendous industry that has such devastating effects on the city. There is a tendency on the part of the editorial opinions of the Free Press, which is to separate the individual players from what is happening in the drama itself. Perhaps these individual players were grade B players.

Certainly, Davis and Mitchell and Herold are not kingpins in the heroin industry. These guys were operating strictly at the middle levels.

But the Free Press editorials ignore the fact that Davis and Mitchell were part of an industry that was destroying the city. It's a sad lack of understanding, being out of touch with the reality of the city.

SUN: Did your experiences at the Free Press lead you to any conclusions about the limits of the possibilities of in-depth investigative reporting in the "straight press"?

Kohn: I think that the "straight press" is really an out-of-date definition, anyway. If you are just talking about the press, there is sort of an old guard and an emerging vanguard, both in magazines and in newspapers.

Those newspapers are facing up to the fact that the times have changed, and if they are to survive, they have to change with them. Those newspapers and magazines who historically haven't done that have died off, and that undoubtedly will continue.

I think by the '80's, those "undergrounds" who have survived and the "straight" newspapers that have survived will be talking essentially to the same audience - the generation of the '80's, which will really be the young "hippies" and "peaceniks" of the '60's.

There are a few newspapers that operate independently, to a certain extent, and they probably won't be affected as much. But it's hard to find any newspaper where a Rockefeller, or someone else of that stripe, hasn't got a piece of the action. So in the end, whatever happens to the Rockefeller family and the people they represent is going to have a profound impact on the newspapers, the press, the television industry as we know it. But I don't have any easy predictions on what's actually gonna happen.