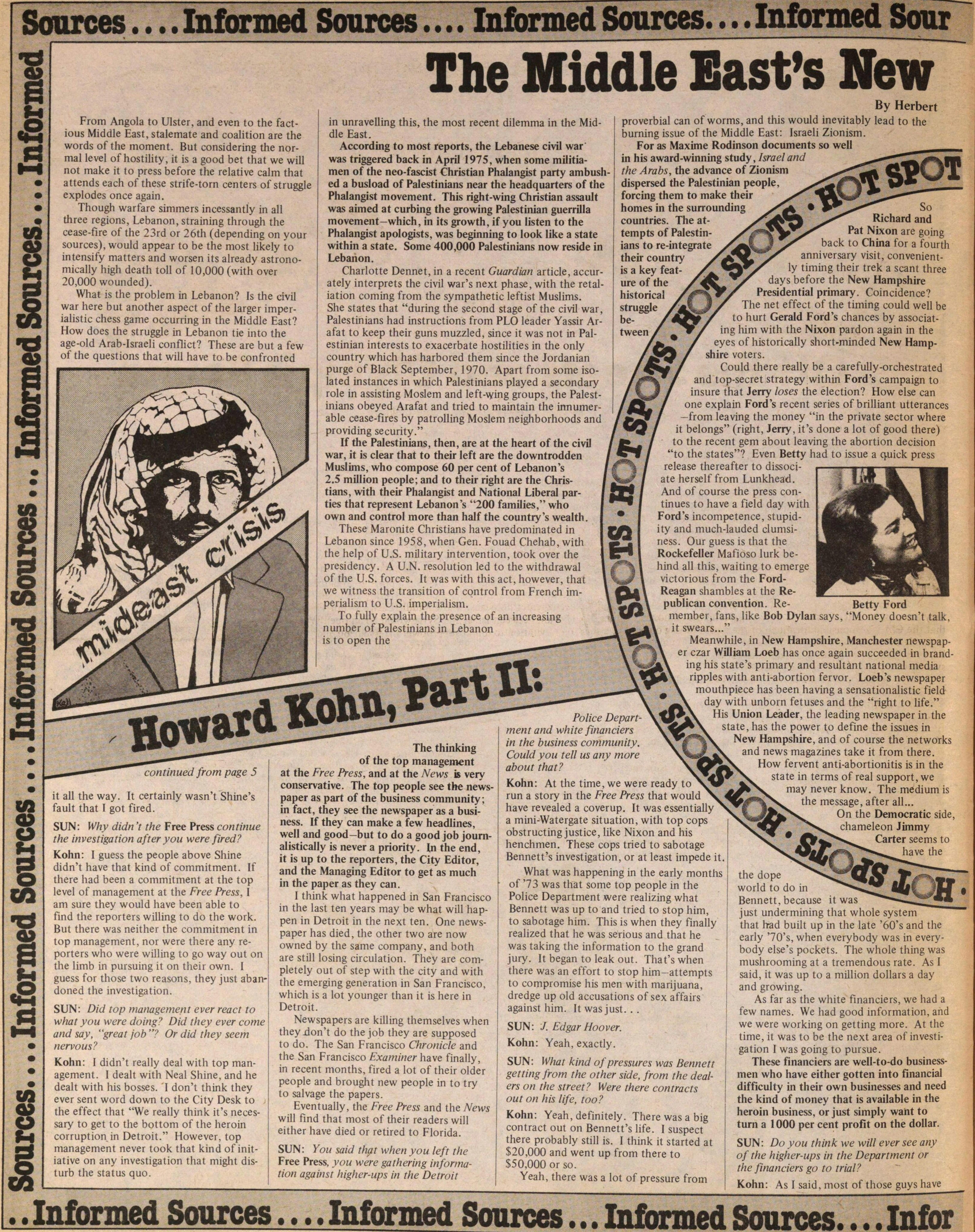 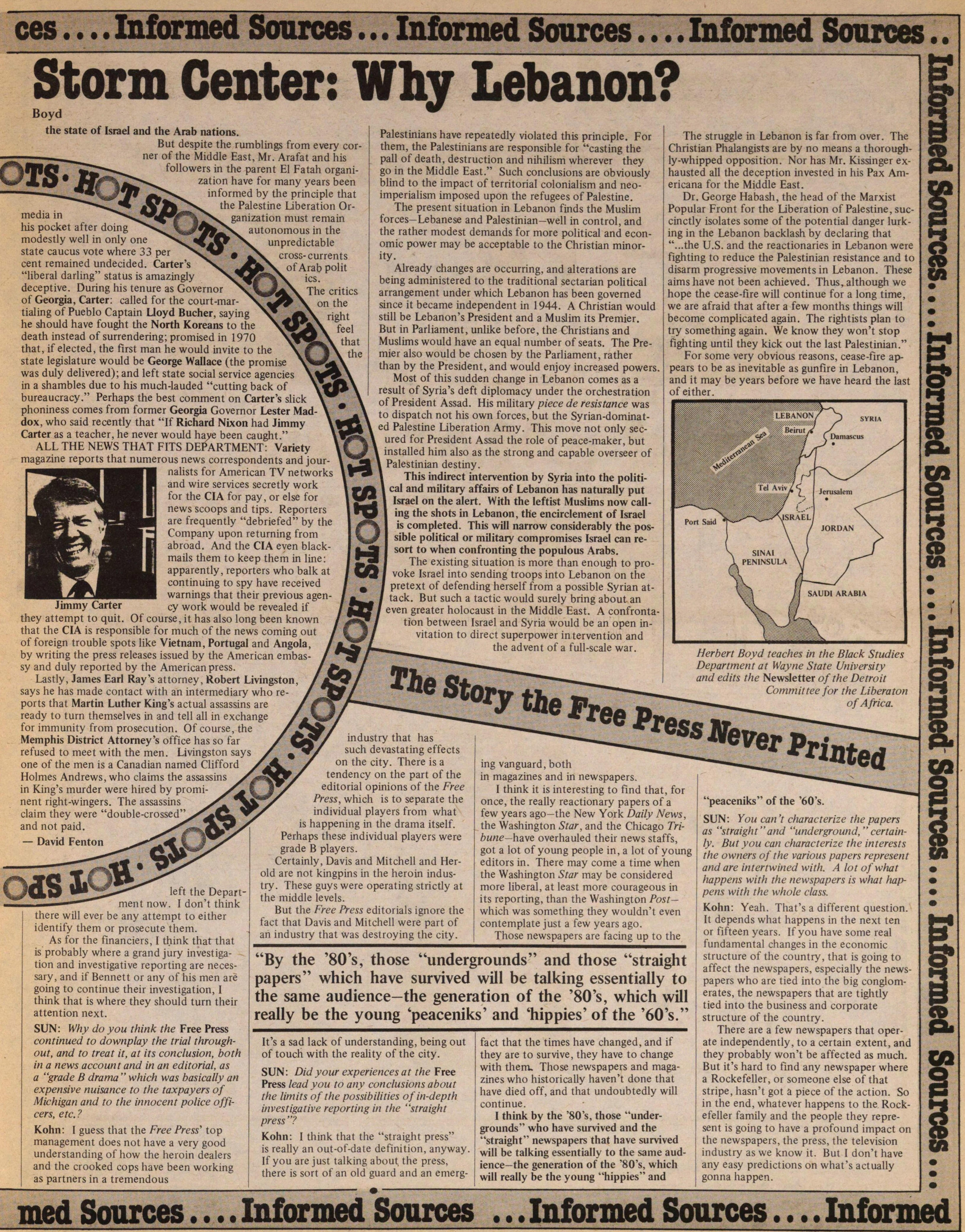 From Angola to Ulster, and even to the factious Middle East, stalemate and coalition are the words of the moment. But considering the normal level of hostility, it is a good bet that we will not make it to press before the relative calm that attends each of these strife-torn centers of struggle explodes once again.

Though warfare simmers incessantly in all three regions, Lebanon, straining through the cease-fire of the 23rd or 26th (depending on your sources), would appear to be the most likely to intensify matters and worsen its already astronomically high death toll of 10,000 (with over 20,000 wounded).

What is the problem in Lebanon? Is the civil war here but another aspect of the larger imperialistic chess game occurring in the Middle East? How does the struggle in Lebanon tie into the age-old Arab-Israeli conflict? These are but a few of the questions that will have to be confronted in unraveling this, the most recent dilemma in the Middle East.

According to most reports, the Lebanese civil war was triggered back in April 1975, when some militiamen of the neo-fascist Christian Phalangist party ambushed a busload of Palestinians near the headquarters of the Phalangist movement. This right-wing Christian assault was aimed at curbing the growing Palestinian guerrilla movement -- which, in its growth, if you listen to the Phalangist apologists, was beginning to look like a state within a state. Some 400,000 Palestinians now reside in Lebanon.

Charlotte Dennet, in a recent Guardian article, accurately interprets the civil war's next phase, with the retaliation coming from the sympathetic leftist Muslims. She states that "during the second stage of the civil war, Palestinians had instructions from PLO leader Yassir Arafat to keep their guns muzzled, since it was not in Palestinian interests to exacerbate hostilities in the only country which has harbored them since the Jordanian purge of Black September, 1970. Apart from some isolated instances in which Palestinians played a secondary role in assisting Moslem and left-wing groups, the Palestinians obeyed Arafat and tried to maintain the innumerable cease-fires by patrolling Moslem neighborhoods and providing security.

If the Palestinians, then, are at the heart of the civil war, it is clear that to their left are the downtrodden Muslims, who compose 60 per cent of Lebanon's 2.5 million people; and to their right are the Christians, with their Phalangist and National Liberal parties that represent Lebanon's "200 families," who own and control more than half the country's wealth.

These Maronite Christians have predominated in Lebanon since 1958, when Gen. Fouad Chehab, with the help of U.S. military intervention, took over the presidency. A U.N. resolution led to the withdrawal of the U.S. forces. It was with this act, however, that we witness the transition of control from French imperialism to U.S. imperialism.

To fully explain the presence of an increasing number of Palestinians in Lebanon is to open the proverbial can of worms, and this would inevitably lead to the burning issue of the Middle East: Israeli Zionism.

For as Maxime Rodinson documents so well in his award-winning study, Israel and the Arabs, the advance of Zionism dispersed the Palestinian people, forcing them to make their homes in the surrounding countries. The attempts of Palestinians to re-integrate their country is a key feature of the historical struggle between the state of Israel and the Arab nations.

But despite the rumblings from every corner of the Middle East, Mr. Arafat and his followers in the parent El Fatah organization have for many years been informed by the principle that the Palestine Liberation Organization must remain autonomous in the unpredictable cross-currents of Arab politics.

The critics on the right feel that the Palestinians have repeatedly violated this principle. For them, the Palestinians are responsible for "casting the pall of death, destruction and nihilism wherever they go in the Middle East." Such conclusions are obviously blind to the impact of territorial colonialism and neo-imperialism imposed upon the refugees of Palestine.

The present situation in Lebanon finds the Muslim forces -- Lebanese and Palestinian -- well in control, and the rather modest demands for more political and economic power may be acceptable to the Christian minority.

Already changes are occurring, and alterations are being administered to the traditional sectarian political arrangement under which Lebanon has been governed since it became independent in 1944. A Christian would still be Lebanon's President and a Muslim its Premier. But in Parliament, unlike before, the Christians and Muslims would have an equal number of seats. The Premier also would be chosen by the Parliament, rather than by the President, and would enjoy increased powers.

Most of this sudden change in Lebanon comes as a result of Syria's deft diplomacy under the orchestration of President Assad. His military piece de resistance was to dispatch not his own forces, but the Syrian-dominated Palestine Liberation Army. This move not only secured for President Assad the role of peace-maker, but installed him also as the strong and capable overseer of Palestinian destiny.

This indirect intervention by Syria into the political and military affairs of Lebanon has naturally put Israel on the alert. With the leftist Muslims now calling the shots in Lebanon, the encirclement of Israel is completed. This will narrow considerably the possible political or military compromises Israel can resort to when confronting the populous Arabs.

The existing situation is more than enough to provoke Israel into sending troops into Lebanon on the pretext of defending herself from a possible Syrian attack. But such a tactic would surely bring about an even greater holocaust in the Middle East. A confrontation between Israel and Syria would be an open invitation to direct superpower intervention and the advent of a full-scale war.

The struggle in Lebanon is far from over. The Christian Phalangists are by no means a thoroughly-whipped opposition. Nor has Mr. Kissinger exhausted all the deception invested in his Pax Americana for the Middle East.

Dr. George Habash, the head of the Marxist Popular Front for the Liberation of Palestine, succinctly isolates some of the potential danger lurking in the Lebanon backlash by declaring that "... the U.S. and the reactionaries in Lebanon were fighting to reduce the Palestinian resistance and to disarm progressive movements in Lebanon. These aims have not been achieved. Thus, although we hope the cease-fire will continue for a long time, we are afraid that after a few months things will become complicated again. The rightists plan to try something again. We know they won't stop fighting until they kick out the last Palestinian."

For some very obvious reasons, cease-fire appears to be as inevitable as gunfire in Lebanon, and it may be years before we have heard the last of either.

Herbert Boyd teaches in the Black Studies Department at Wayne State University and edits the Newsletter of the Detroit Committee for the Liberation of Africa.