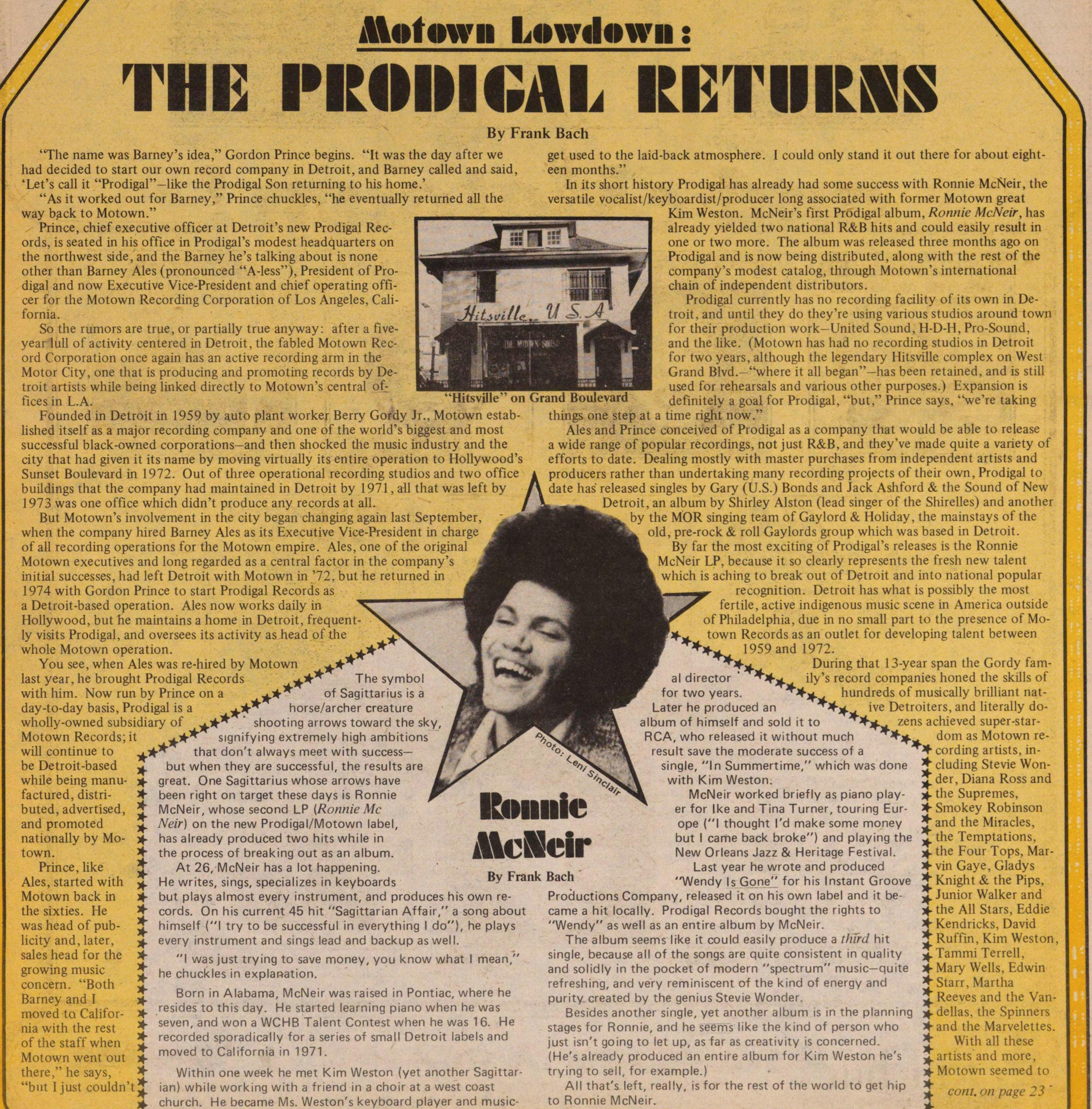 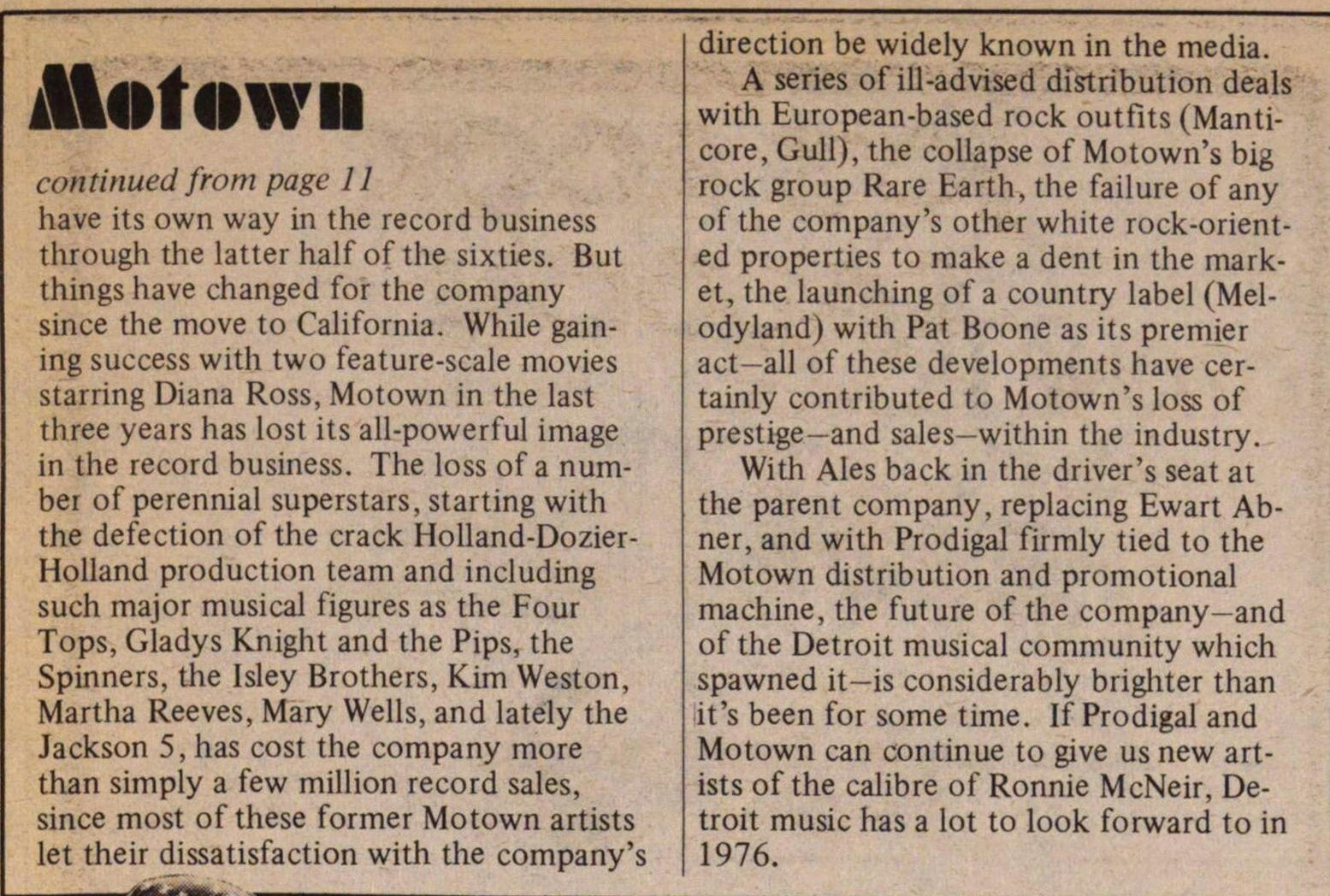 "The name was Barney's idea," Gordon Prince begins. "It was the day after we had decided to start our own record company in Detroit, and Barney called and said, 'Let's call it "Prodigal"- like the Prodigal Son returning to his home.'

"As it worked out for Barney," Prince chuckles, "he eventually returned all the way back to Motown.

Prince, chief executive officer at Detroit's new Prodigal Records, is seated in his office in Prodigal's modest headquarters on the northwest side, and the Barney he's talking about is none other than Barney Ales (pronounced "A-less"), President of Prodigal and now Executive Vice-President and chief operating officer for the Motown Recording Corporation of Los Angeles, California.

So the rumors are true, or partially true anyway: after a five year lull of activity centered in Detroit, the fabled Motown Record Corporation once again has an active recording arm in the Motor City, one that is producing and promoting records by Detroit artists while being linked directly to Motown's central offices in L.A.

Founded in Detroit in 1959 by auto plant worker Berry Gordy Jr., Motown established itself as a major recording company and one of the world's biggest and most successful black-owned corporations- and then shocked the music industry and the city that had given it its name by moving virtually its entire operation to Hollywood's Sunset Boulevard in 1972. Out of three operational recording studios and two office buildings that the company had maintained in Detroit by 1971, all that was left by 1973 was one office which didn't produce any records at all.

But Motown's involvement in the city began changing again last September, when the company hired Barney Ales as its Executive Vice-President in charge of all recording operations for the Motown empire. Ales, one of the original Motown executives and long regarded as a central factor in the company's initial successes, had left Detroit with Motown in '72, but he returned in 1974 with Gordon Prince to start Prodigal Records as a Detroit-based operation. Ales now works daily in Hollywood, but he maintains a home in Detroit, frequently visits Prodigal, and oversees its activity as head of the whole Motown operation.

You see, when Ales was re-hired by Motown last year, he brought Prodigal Records with him. Now run by Prince on a day-to-day basis, Prodigal is a wholly-owned subsidiary of Motown Records; it will continue to be Detroit-based while being manufactured, distributed, advertised, and promoted nationally by Motown.

Prince, like Ales, started with Motown back in the sixties. He was head of publicity and, later, sales head for the growing music concern. "Both Barney and I moved to California with the rest of the staff when Motown went out there," he says, "but I just couldn't get used to the laid-back atmosphere. I could only stand it out there for about eighteen months."

In its short history Prodigal has already had some success with Ronnie McNeir, the versatile vocalist/keyboardist/producer long associated with former Motown great Kim Weston. McNeir's first Prodigal album, Ronnie McNeir, has already yielded two national R&B hits and could easily result in one or two more. The album was released three months ago on Prodigal and is now being distributed, along with the rest of the company's modest catalog, through Motown's international chain of independent distributors.

Prodigal currently has no recording facility of its own in Detroit, and until they do they're using various studios around town for their production work-United Sound, H-D-H, Pro-Sound, and the like. (Motown has had no recording studios in Detroit for two years, although the legendary Hitsville complex on West Grand Blvd. "where it all began"-has been retained, and is still used for rehearsals and various other purposes.) Expansion is definitely a goal for Prodigal, "but," Prince says, "we're taking things one step at a time right now.

Ales and Prince conceived of Prodigal as a company that would be able to release a wide range of popular recordings, not just R&B, and they've made quite a variety of efforts to date. Dealing mostly with master purchases from independent artists and producers rather than undertaking many recording projects of their own, Prodigal to date has released singles by Gary (U.S.) Bonds and Jack Ashford & the Sound of New Detroit, an album by Shirley Alston (lead singer of the Shirelles) and another by the MOR singing team of Gaylord & Holiday, the mainstays of the old, pre-rock & roll Gaylords group which was based in Detroit. By far the most exciting of Prodigal's releases is the Ronnie McNeir LP because it so clearly represents the fresh new talent which is aching to break out of Detroit and into national popular recognition. Detroit has what is possibly the most fertile, active indigenous music scene in America outside of Philadelphia, due in no small part to the presence of Motown Records as an outlet for developing talent between 1959 and 1972.

During that 13-year span the Gordy family's record companies honed the skills of hundreds of musically brilliant native Detroiters, and literally dozens achieved super-stardom as Motown recording artists, including Stevie Wonder, Diana Ross and the Supremes, Smokey Robinson and the Miracles, the Temptations, the Four Tops, Marvin Gaye, Gladys Knight & the Pips, Junior Walker and the All Stars, Eddie Kendricks, David Ruffin, Kim Weston, Tammi Terrell, Mary Wells, Edwin Starr, Martha Reeves and the Vandellas, the Spinners and the Marvelettes.

With all these artists and more, Motown seemed to have its own way in the record business through the latter half of the sixties. But things have changed for the company since the move to California. While gaining success with two feature-scale movies starring Diana Ross, Motown in the last three years has lost its all-powerful image in the record business. The loss of a number of perennial superstars, starting with the defection of the crack Holland-Dozier-Holland production team and including such major musical figures as the Four Tops, Gladys Knight and the Pips, the Spinners, the Isley Brothers, Kim Weston, Martha Reeves, Mary Wells, and lately the Jackson 5, has cost the company more than simply a few million record sales, since most of these former Motown artists let their dissatisfaction with the company's direction be widely known in the media.

A series of ill-advised distribution deals with European-based rock outfits (Manticore, Gull), the collapse of Motown's big rock group Rare Earth, the failure of any of the company's other white rock-oriented properties to make a dent in the market, the launching of a country label (Melodyland) with Pat Boone as its premier act-all of these developments have certainly contributed to Motown's loss of prestige- and sales-within the industry.

With Ales back in the driver's seat at the parent company, replacing Ewart Abner, and with Prodigal firmly tied to the Motown distribution and promotional machine, the future of the company-and of the Detroit musical community which spawned it-is considerably brighter than it's been for some time. If Prodigal and Motown can continue to give us new artists of the calibre of Ronnie McNeir, Detroit music has a lot to look forward to in 1976.