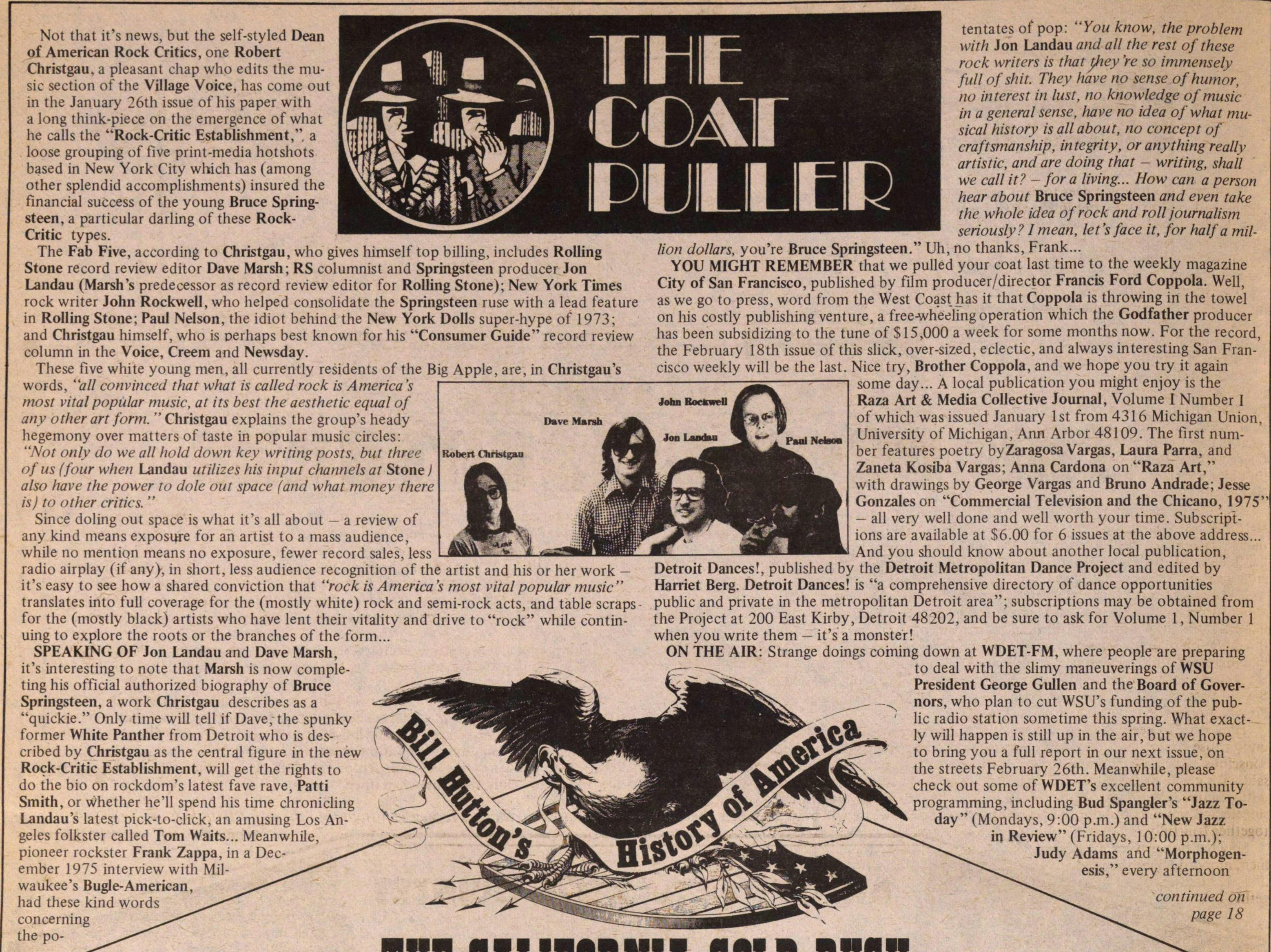 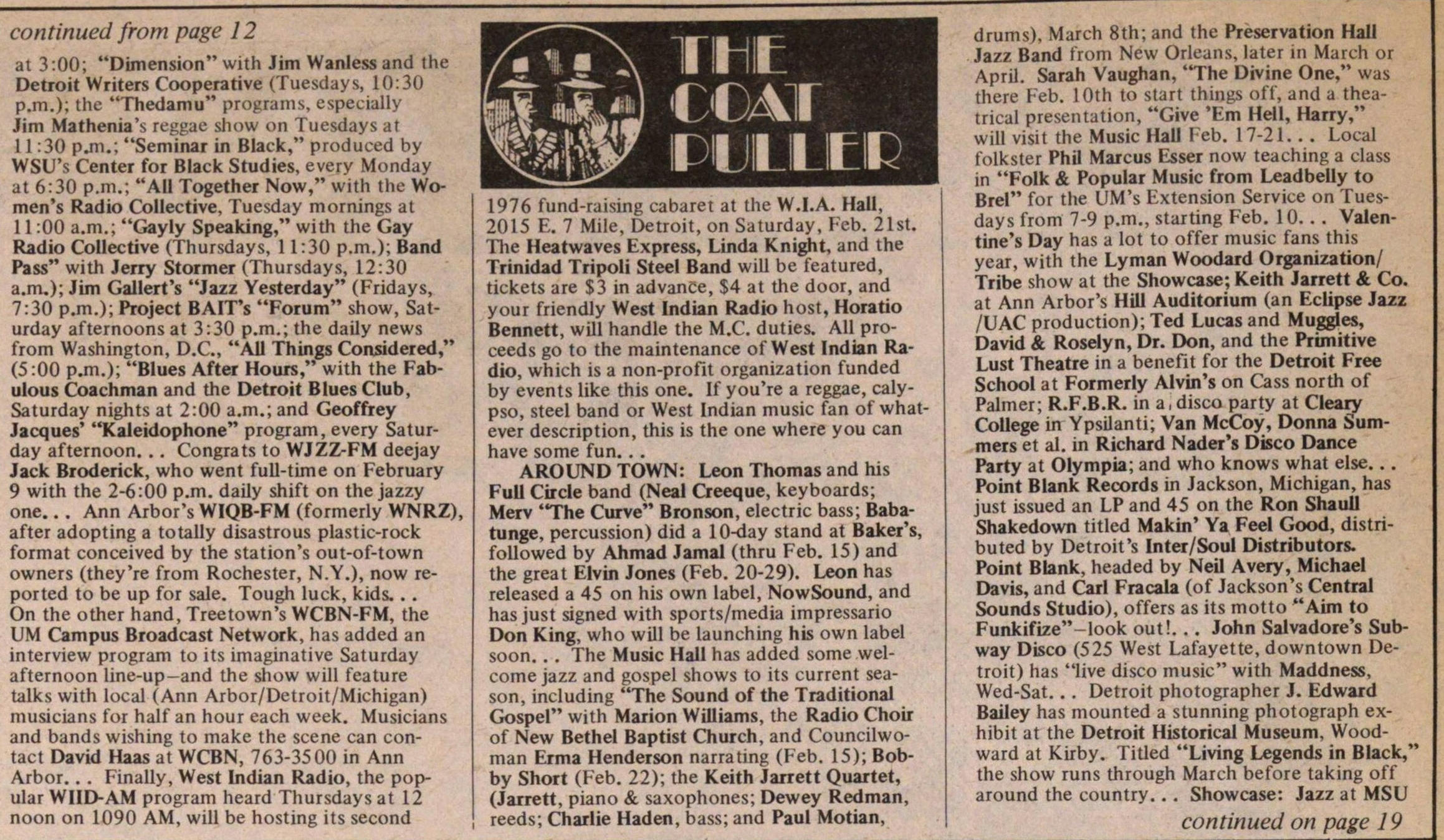 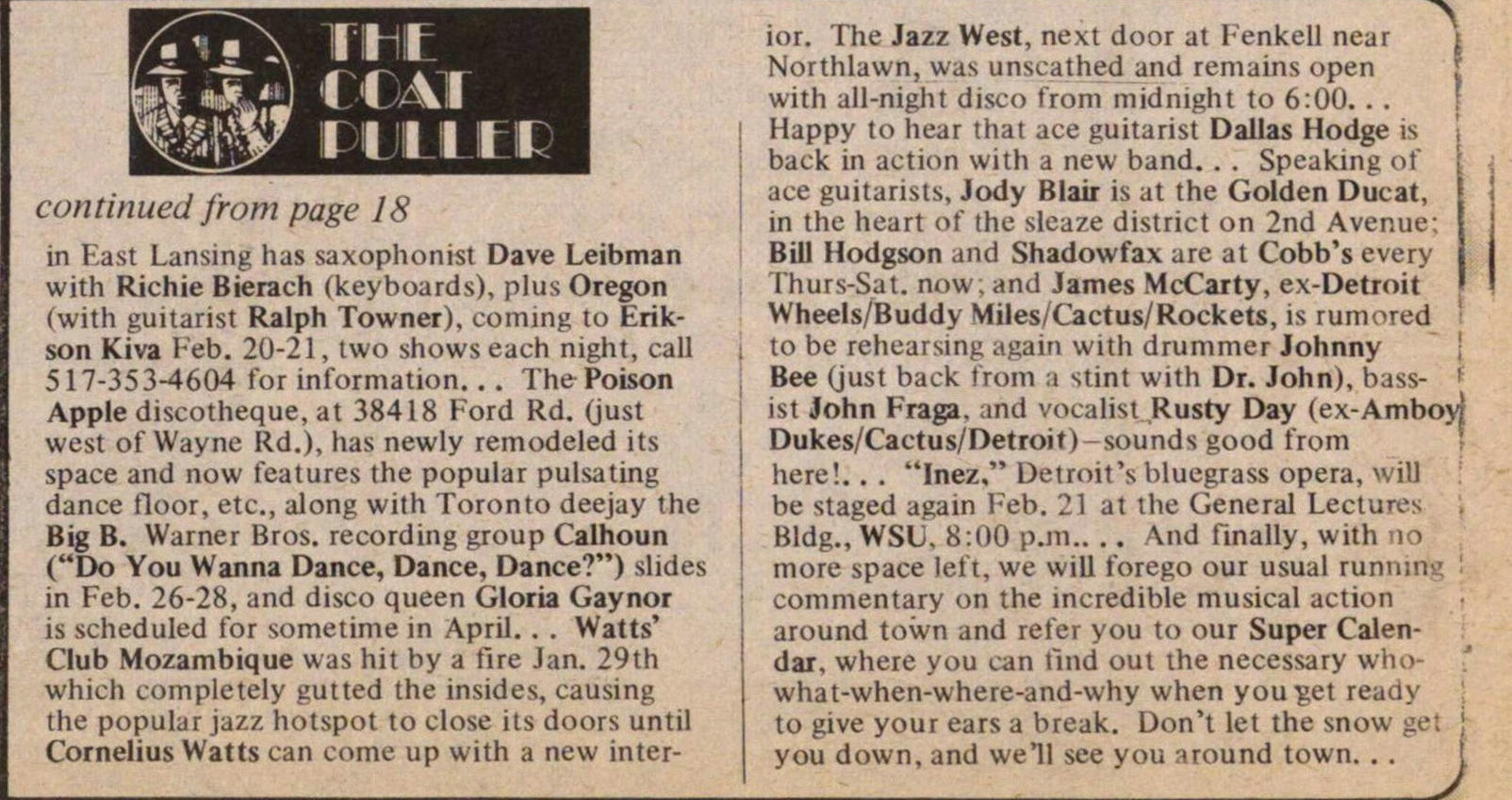 Not that it's news, but the self-styled Dean of American Rock Critics, one Robert Christgau, a pleasant chap who edits the music section of the Village Voice, has come out in the January 26th issue of his paper with a long think-piece on the emergence of what he calls the "Rock-Critic Establishment," a loose grouping of five print-media hotshots based in New York City which has (among other splendid accomplishments) insured the financial success of the young Bruce Springsteen, a particular darling of these Rock-Critic types.

These five white young men, all currently residents of the Big Apple, are, in Christgau's words, "all convinced that what is called rock is America 's most vital popular music, at its best the aesthetic equal of any other art form." Christgau explains the group's heady hegemony over matters of taste in popular music circles: "Not only do we all hold down key writing posts, but three of us (four when Landau utilizes his input channels at Stone ) also have the power to dole out space (and what money there is) to other critics."

Since doling out space is what it's all about -- a review of any kind means exposure for an artist to a mass audience, while no mention means no exposure, fewer record sales, less radio airplay (if any), in short, less audience recognition of the artist and his or her work -- it's easy to see how a shared conviction that "rock is America 's most vital popular music" translates into full coverage for the (mostly white) rock and semi-rock acts, and table scraps for the (mostly black) artists who have lent their vitality and drive to "rock" while continuing to explore the roots or the branches of the form ...

SPEAKING OF Jon Landau and Dave Marsh, it's interesting to note that Marsh is now completing his official authorized biography of Bruce Springsteen, a work Christgau describes as a '"quickie." Only time will tell if Dave, the spunky former White Panther from Detroit who is described by Christgau as the central figure in the new Rock-Critic Establishment, will get the rights to do the bio on rockdom's latest fave rave, Patti Smith, or whether he'll spend his time chronicling Landau's latest pick-to-click, an amusing Los Angeles folkster called Tom Waits ... Meanwhile, pioneer rockster Frank Zappa, in a December 1975 interview with Milwaukee's Bugle-American, had these kind words concerning the potentates of pop: "You know, the problem with Jon Landau and all the rest of these rock writers is that they're so immensely full of shit. They have no sense of humor, no interest in lust, no knowledge of music in a general sense, have no idea of what musical history is all about, no concept of craftsmanship, integrity, or anything really artistic, and are doing that -- writing, shall we call it? -- for a living ... How can a person hear about Bruce Springsteen and even take the whole idea of rock and roll journalism seriously? I mean, let's face it, for half a million dollars, you're Bruce Springsteen." Uh, no thanks, Frank ...

YOU MIGHT REMEMBER that we pulled your coat last time to the weekly magazine City of San Francisco, published by film producer/director Francis Ford Coppola. Well, as we go to press, word from the West Coast has it that Coppola is throwing in the towel on his costly publishing venture, a free-wheeling operation which the Godfather producer has been subsidizing to the tune of $15,000 a week for some months now. For the record, the February 18th issue of this slick, over-sized, eclectic, and always interesting San Francisco weekly will be the last. Nice try, Brother Coppola, and we hope you try it again some day ... A local publication you might enjoy is the Raza Art & Media Collective Journal, Volume I Number I of which was issued January 1st from 4316 Michigan Union, University of Michigan, Ann Arbor 48109. The first number features poetry by Zaragosa Vargas, Laura Parra, and Zaneta Kosiba Vargas; Anna Cardona on "Raza Art," with drawings by George Vargas and Bruno Andrade; Jesse Gonzales on "Commercial Television and the Chicano, 1975" -- all very well done and well worth your time. Subscriptions are available at $6.00 for 6 issues at the above address ... And you should know about another local publication, Detroit Dances!, published by the Detroit Metropolitan Dance Project and edited by Harriet Berg. Detroit Dances! is "a comprehensive directory of dance opportunities public and private in the metropolitan Detroit area"; subscriptions may be obtained from the Project at 200 East Kirby, Detroit 48202, and be sure to ask for Volume 1, Number 1 when you write them -- it's a monster!

ON THE AIR: Strange doings coming down at WDET-FM, where people are preparing to deal with the slimy maneuverings of WSU President George Gullen and the Board of Governors, who plan to cut WSU's funding of the public radio station sometime this spring. What exactly will happen is still up in the air, but we hope to bring you a full report in our next issue, on the streets February 26th. Meanwhile, please check out some of WDET's excellent community programming, including Bud Spangler's "Jazz Today" (Mondays, 9:00 p.m.) and "New Jazz in Review" (Fridays, 10:00 p.m.); Judy Adams and "Morphogenesis," every afternoon

at 3:00; "Dimension" with Jim Wanless and the Detroit Writers Cooperative (Tuesdays, 10:30 p.m.); the "Thedamu" programs, especially Jim Mathenia's reggae show on Tuesdays at 11:30 p.m.; "Seminar in Black," produced by WSU's Center for Black Studies, every Monday at 6:30 p.m.; "All Together Now," with the Women's Radio Collective, Tuesday mornings at 11:00 a.m.; "Gayly Speaking," with the Gay Radio Collective (Thursdays, 11:30 p.m.); "Band Pass" with Jerry Stormer (Thursdays, 12:30 a.m.); Jim Gallert's "Jazz Yesterday" (Fridays, 7:30 p.m.); Project BAIT's "Forum" show, Saturday afternoons at 3:30 p.m.; the daily news from Washington, D.C., "All Things Considered," (5:00 p.m.); "Blues After Hours," with the Fabulous Coach man and the Detroit Blues Club, Saturday nights at 2:00 a.m.; and Geoffrey Jacques' "Kaleidophone" program, every Saturday afternoon ... Congrats to WJZZ-FM deejay Jack Broderick, who went full-time on February 9 with the 2-6:00 p.m. daily shift on the jazzy one ... Ann Arbor's WIQB-FM (formerly WNRZ), after adopting a totally disastrous plastic-rock format conceived by the station's out-of-town owners (they're from Rochester, N.Y.), now reported to be up for sale. Tough luck, kids ... On the other hand, Treetown's WCBN-FM, the UM Campus Broadcast Network, has added an interview program to its imaginative Saturday afternoon line-up -- and the show will feature talks with local (Ann Arbor/Detroit/Michigan) musicians for half an hour each week. Musicians and bands wishing to make the scene can contact David Haas at WCBN, 763-3500 in Ann Arbor ... Finally, West Indian Radio, the popular WIID-AM program heard Thursdays at 12 noon on 1090 AM, will be hosting its second 1976 fund-raising cabaret at the W.I.A. Hall, 2015 E. 7 Mile, Detroit, on Saturday, Feb. 21st. The Heatwaves Express, Linda Knight, and the Trinidad Tripoli Steel Band will be featured, tickets are $3 in advance, $4 at the door, and your friendly West Indian Radio host, Horatio Bennett, will handle the M.C. duties. All proceeds go to the maintenance of West Indian Radio, which is a non-profit organization funded by events like this one. If you're a reggae, calypso, steel band or West Indian music fan of whatever description, this is the one where you can have some fun ...

AROUND TOWN: Leon Thomas and his Full Circle band (Neal Creeque, keyboards; Merv "The Curve" Bronson, electric bass; Babatunge, percussion) did a 10-day stand at Baker's, followed by Ahmad Jamal (thru Feb. 15) and the great Elvin Jones (Feb. 20-29). Leon has released a 45 on his own label, NowSound, and has just signed with sports/media impressario Don King, who will be launching his own label soon ... The Music Hall has added some welcome jazz and gospel shows to its current season, including "The Sound of the Traditional Gospel" with Marion Williams, the Radio Choir of New Bethel Baptist Church, and Councilwoman Erma Henderson narrating (Feb. 15); Bobby Short (Feb. 22); the Keith Jarrett Quartet, (Jarrett, piano & saxophones; Dewey Redman, reeds; Charlie Haden, bass; and Paul Motian, drums), March 8th; and the Preservation Hall Jazz Band from New Orleans, later in March or April. Sarah Vaughan, "The Divine One," was there Feb. 10th to start things off, and a theatrical presentation, "Give 'Em Hell, Harry," will visit the Music Hall Feb. 17-21 ... Local folkster Phil Marcus Esser now teaching a class in "Folk & Popular Music from Leadbelly to Brel" for the UM's Extension Service on Tuesdays from 7-9 p.m., starting Feb. 10 ... Valentine's Day has a lot to offer music fans this year, with the Lyman Woodard Organization/Tribe show at the Showcase; Keith Jarrett & Co. at Ann Arbor's Hill Auditorium (an Eclipse Jazz/UAC production); Ted Lucas and Muggles, David & Roselyn, Dr. Don, and the Primitive Lust Theatre in a benefit for the Detroit Free School at Formerly Alvin's on Cass north of Palmer; R.F.B.R. in a disco party at Cleary College in Ypsilanti; Van McCoy, Donna Summers et al. in Richard Nader's Disco Dance Party at Olympia; and who knows what else ... Point Blank Records in Jackson, Michigan, has just issued an LP and 45 on the Ron Shaull Shakedown titled Makin' Ya Feel Good, distributed by Detroit 's Inter/Soul Distributors. Point Blank, headed by Neil Avery, Michael Davis, and Carl Fracala (of Jackson's Central Sounds Studio), offers as its motto "Aim to Funkifize" -- look out! ... John Salvadore's Subway Disco (525 West Lafayette, downtown Detroit) has "live disco music" with Maddness, Wed-Sat ... Detroit photographer J. Edward Bailey has mounted a stunning photograph exhibit at the Detroit Historical Museum, Woodward at Kirby. Titled "Living Legends in Black," the show runs through March before taking off around the country ... Showcase: Jazz at MSU

in East Lansing has saxophonist Dave Leibman with Richie Bierach (keyboards), plus Oregon (with guitarist Ralph Towner) coming to Erikson Kiva Feb. 20-21, two shows each night, call 517-353-4604 for information ... The Poison Apple discotheque, at 38418 Ford Rd. (just west of Wayne Rd.), has newly remodeled its space and now features the popular pulsating dance floor, etc, along with Toronto deejay the Big B. Warner Bros. recording group Calhoun ("Do You Wanna Dance, Dance, Dance?") slides in Feb. 26-28, and disco queen Gloria Gaynor is scheduled for sometime in April ... Watts' Club Mozambique was hit by a fire Jan. 29th which completely gutted the insides, causing the popular jazz hotspot to close its doors until Cornelius Watts can come up with a new interior. The Jazz West, next door al Fenkell near Northlawn, was unscathed and remains open with all-night disco from midnight to 6:00 ... Happy to hear that ace guitarist Dallas Hodge is back in action with a new band ... Speaking of ace guitarists, Jody Blair is at the Golden Ducat, in the heart of the sleaze district on 2nd Avenue; Bill Hodgson and Shadowfax are at Cobb's every Thurs-Sat. now; and James McCarty, ex-Detroit Wheels/Buddy Miles/Cactus/Rockets, is rumored to be rehearsing again with drummer Johnny Bee (just back from a stint with Dr. John), bassist John Fraga, and vocalist Rusty Day (ex-Amboy Dukes/Cactus/Detroit) -- sounds good from here! ... "Inez," Detroit's bluegrass opera, will be staged again Feb. 21 at the General Lectures Bldg., WSU, 8:00 p.m. ... And finally, with no more space left, we will forego our usual running commentary on the incredible musical action around town and refer you to our Super Calendar, where you can find out the necessary who-what-when-where-and-why when you get ready to give your ears a break. Don't let the snow get you down, and we'll see you around town ...