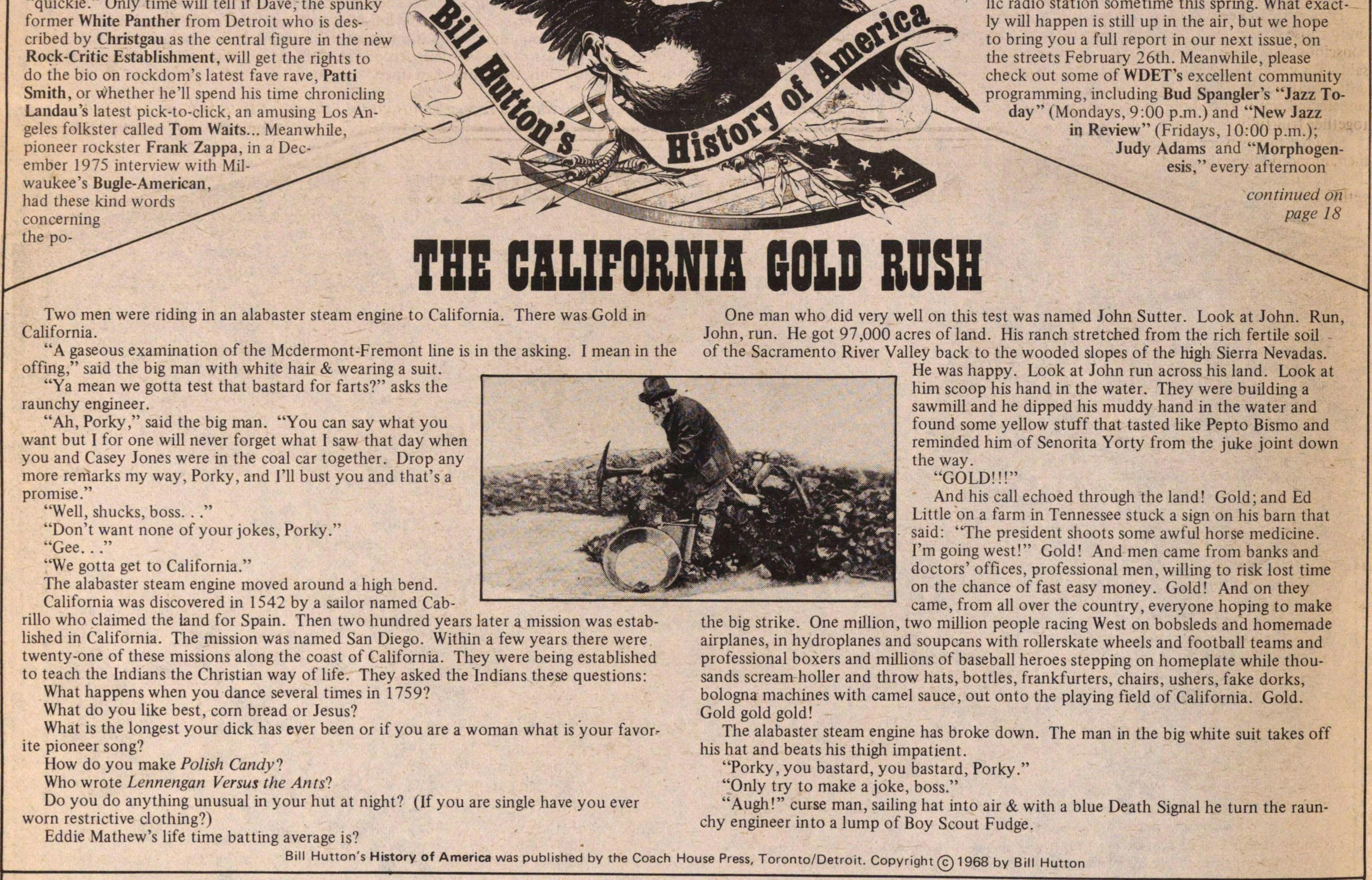 Two men were riding in an alabaster steam engine to California. There was Gold in California.

"A gaseous examination of the Mcdermont-Fremont line is in the asking. I mean in the offing," said the big man with white hair & wearing a suit.

"Ya mean we gotta test that bastard for farts?" asks the raunchy engineer.

"Ah, Porky," said the big man. "You can say what you want but I for one will never forget what I saw that day when you and Casey Jones were in the coal car together. Drop any more remarks my way, Porky, and I'll bust you and that's a promise."

"Don't want none of your jokes, Porky."

"We gotta get to California."

The alabaster steam engine moved around a high bend.

California was discovered in 1542 by a sailor named Cabrillo who claimed the land for Spain. Then two hundred years later a mission was established in California. The mission was named San Diego. Within a few years there were twenty-one of these missions along the coast of California. They were being established to teach the Indians the Christian way of life. They asked the Indians these questions:

What happens when you dance several times in 1759?

What do you like best, corn bread or Jesus?

What is the longest your dick has ever been or if you are a woman what is your favorite pioneer song?

How do you make Polish Candy?

Who wrote Lennengan Versus the Ants?

Do you do anything unusual in your hut at night? (If you are single have you ever worn restrictive clothing?)

One man who did very well on this test was named John Sutter. Look at John. Run, John, run. He got 97,000 acres of land. His ranch stretched from the rich fertile soil of the Sacramento River Valley back to the wooded slopes of the high Sierra Nevadas. He was happy. Look at John run across his land. Look at him scoop his hand in the water. They were building a sawmill and he dipped his muddy hand in the water and found some yellow stuff that tasted like Pepto Bismo and reminded him of Senorita Yorty from the juke joint down the way.

And his call echoed through the land! Gold; and Ed Little on a farm in Tennessee stuck a sign on his barn that said: "The president shoots some awful horse medicine. I'm going west!" Gold! And men came from banks and doctors' offices, professional men, willing to risk lost time on the chance of fast easy money. Gold! And on they came, from all over the country, everyone hoping to make the big strike. One million, two million people racing West on bobsleds and homemade airplanes, in hydroplanes and soupcans with rollerskate wheels and football teams and professional boxers and millions of baseball heroes stepping on homeplate while thousands scream holler and throw hats, bottles, frankfurters, chairs, ushers, fake dorks, bologna machines with camel sauce, out onto the playing field of California. Gold. Gold gold gold!

The alabaster steam engine has broke down. The man in the big white suit takes off his hat and beats his thigh impatient.

"Augh!" curse man, sailing hat into air & with a blue Death Signal he turn the raunchy engineer into a lump of Boy Scout Fudge.