Probity At The Showcase: The East Side Comes Alive 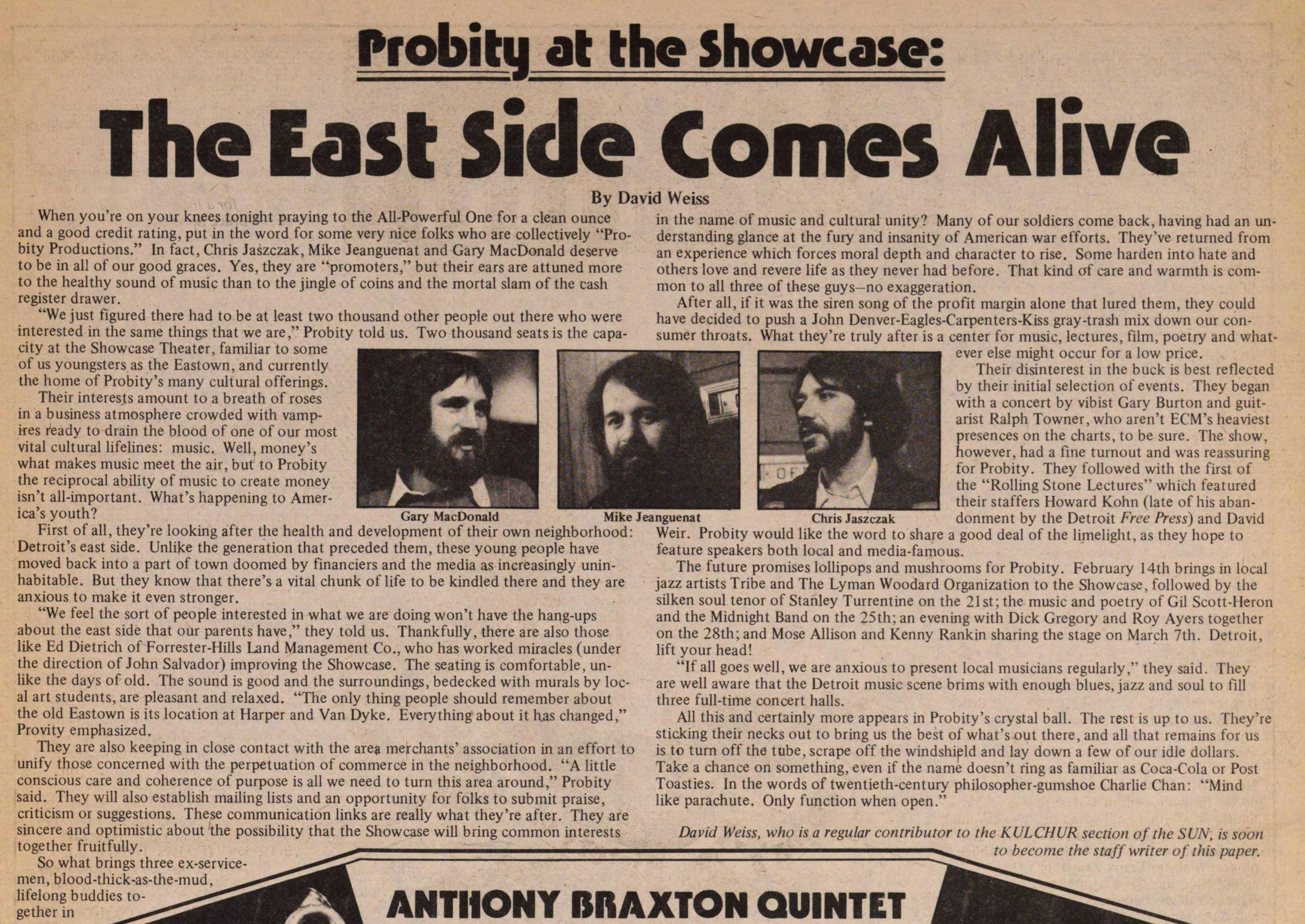 When you're on your knees tonight praying to the All-Powerful One for a clean ounce and a good credit rating, put in the word for some very nice folks who are collectively "Probity Productions." In fact, Chris Jaszczak, Mike Jeanguenat and Gary MacDonald deserve to be in all of our good graces. Yes, they are "promoters," but their ears are attuned more to the healthy sound of music than to the jingle of coins and the mortal slam of the cash register drawer.

"We just figured there had to be at least two thousand other people out there who were interested in the same things that we are," Probity told us. Two thousand seats is the city at the Showcase Theater, familiar to some of us youngsters as the Eastown, and currently the home of Probity's many cultural offerings. Their interests amount to a breath of roses in a business atmosphere crowded with vampires ready to drain the blood of one of our most vital cultural lifelines: music. Well, money's what makes music meet the air, but to Probity the reciprocal ability of music to create money isn't all-important. What's happening to America's youth?

First of all, they're looking after the health and development of their own neighborhood: Detroit's east side. Unlike the generation that preceded them, these young people have moved back into a part of town doomed by financiers and the media as increasingly uninhabitable. But they know that there's a vital chunk of life to be kindled there and they are anxious to make it even stronger.

"We feel the sort of people interested in what we are doing won't have the hang-ups about the east side that our parents have," they told us. Thankfully, there are also those like Ed Dietrich of Forrester-Hills Land Management Co., who has worked miracles (under the direction of John Salvador) improving the Showcase. The seating is comfortable, unlike the days of old. The sound is good and the surroundings, bedecked with murals by local art students, are pleasant and relaxed. "The only thing people should remember about the old Eastown is its location at Harper and Van Dyke. Everything about it has changed," Provity emphasized.

They are also keeping in close contact with the area merchants' association in an effort to unify those concerned with the perpetuation of commerce in the neighborhood. "A little conscious care and coherence of purpose is all we need to turn this area around," Probity said. They will also establish mailing lists and an opportunity for folks to submit praise, criticism or suggestions. These communication links are really what they're after. They are sincere and optimistic about the possibility that the Showcase will bring common interests together fruitfully.

So what brings three ex-servicemen, blood-thick-as-the-mud, lifelong buddies together in in the name of music and cultural unity? Many of our soldiers come back, having had an understanding glance at the fury and insanity of American war efforts. They've returned from an experience which forces moral depth and character to rise. Some harden into hate and others love and revere life as they never had before. That kind of care and warmth is common to all three of these guys-no exaggeration.

After all, if it was the siren song of the profit margin alone that lured them, they could have decided to push a John Denver-Eagles-Carpenters-Kiss gray-trash mix down our consumer throats. What they're truly after is a center for music, lectures, film, poetry and ever else might occur for a low price.

Their disinterest in the buck is best reflected by their initial selection of events. They began with a concert by vibist Gary Burton and guitarist Ralph Towner, who aren't ECM's heaviest presences on the charts, to be sure. The show, however, had a fine turnout and was reassuring for Probity. They followed with the first of the "Rolling Stone Lectures" which featured their staffers Howard Kohn (late of his abandonment by the Detroit Free Press) and David Weir. Probity would like the word to share a good deal of the limelight, as they hope to feature speakers both local and media-famous.

The future promises lollipops and mushrooms for Probity. February 14th brings in local jazz artists Tribe and The Lyman Woodard Organization to the Showcase, followed by the silken soul tenor of Stanley Turrentine on the 21st; the music and poetry of Gil Scott-Heron and the Midnight Band on the 25th; an evening with Dick Gregory and Roy Ayers together on the 28th; and Mose Allison and Kenny Rankin sharing the stage on March 7th. Detroit, lift your head!

"If all goes well, we are anxious to present local musicians regularly," they said. They are well aware that the Detroit music scene brims with enough blues, jazz and soul to fill three full-time concert halls.

All this and certainly more appears in Probity's crystal ball. The rest is up to us. They're sticking their necks out to bring us the best of what's out there, and all that remains for us is to turn off the tube, scrape off the windshield and lay down a few of our idle dollars. Take a chance on something, even if the name doesn't ring as familiar as Coca-Cola or Post Toasties. In the words of twentieth-century philosopher-gumshoe Charlie Chan: "Mind like parachute. Only function when open."

David Weiss, who is a regular contributor to the KULCHUR section of the SUN, is soon to become the staff writer of this paper.