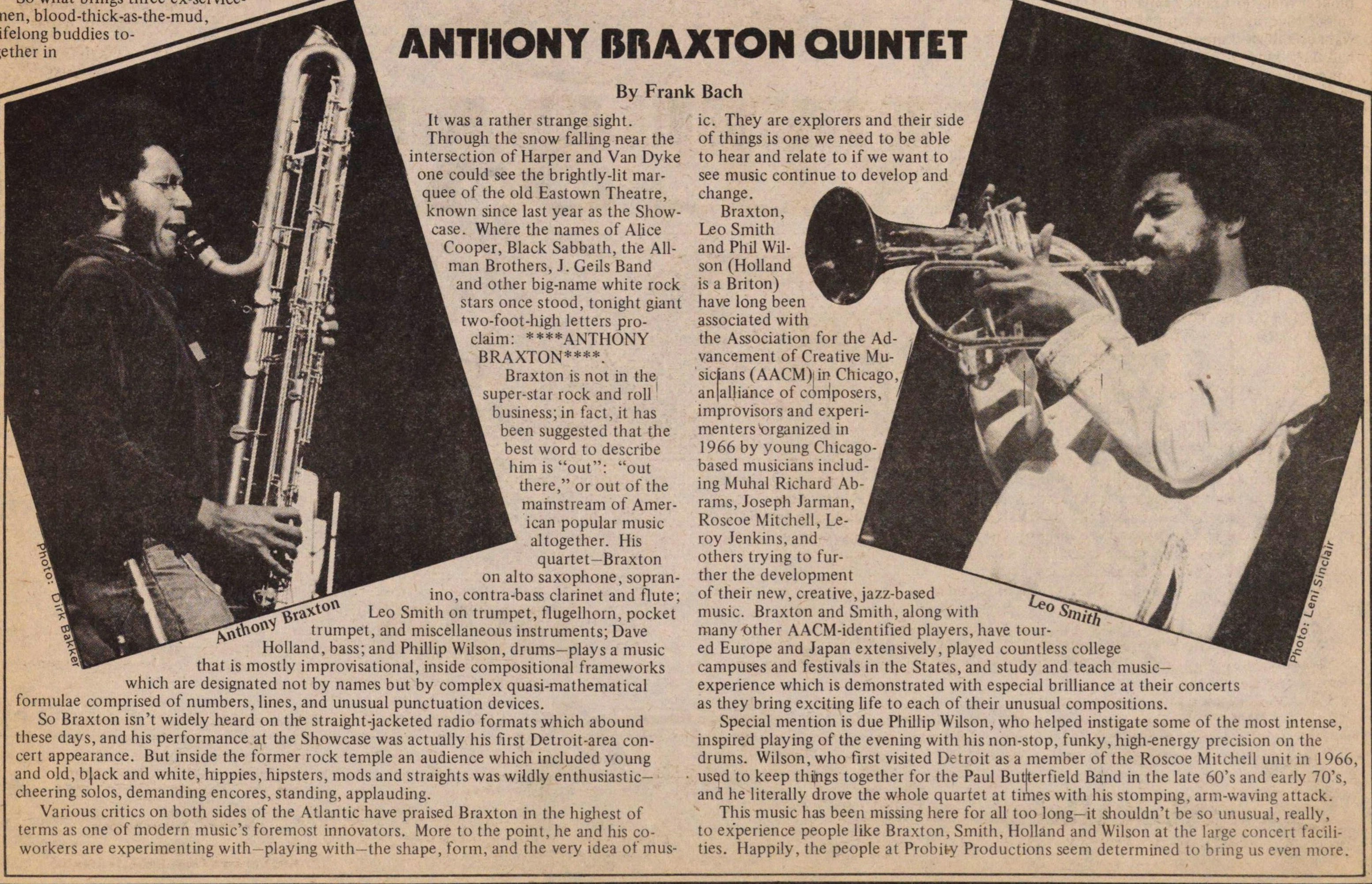 It was a rather strange sight. Through the snow falling near the intersection of Harper and Van Dyke one could see the brightly-lit marquee of the old Eastown Theatre, known since last year as the Showcase. Where the names of Alice Cooper, Black Sabbath, the Allman Brothers, J. Geils Band and other big-name white rock stars once stood, tonight giant two-foot-high letters proclaim: ANTHONY BRAXTON.

Braxton is not in the super-star rock and roll business; in fact, it has been suggested that the best word to describe him is "out": "out there," or out of the mainstream of American popular music altogether. His quartet-Braxton on alto saxophone, sopranino. contra-bass clarinet and flute: Leo Smith on trumpet, flugelhorn, pocket trumpet, and miscellaneous instruments; Dave Holland, bass; and Phillip Wilson, drums-plays a music that is mostly improvisational, inside compositional frameworks which are designated not by names but by complex quasi-mathematical formulae comprised of numbers, lines, and unusual punctuation devices.

So Braxton isn't widely heard on the straight-jacketed radio formats which abound these days, and his performance at the Showcase was actually his first Detroit-area concert appearance. But inside the former rock temple an audience which included young and old, black and white, hippies, hipsters, mods and straights was wildly enthusiastic-cheering solos, demanding encores, standing, applauding.

Various critics on both sides of the Atlantic have praised Braxton in the highest of terms as one of modern music's foremost innovators. More to the point, he and his coworkers are experimenting with- playing with-the shape, form, and the very idea of music. They are explorers and their side of things is one we need to be able to hear and relate to if we want to see music continue to develop and change.

Braxton, Leo Smith Phil Wilson (Holland is a Briton) have long been associated with the Association for the Advancement of Creative Musicians (AACM) in Chicago, an alliance of composers, improvisors and experimenters organized in 1966 by young Chicago-based musicians including Muhal Richard Abrams, Joseph Jarman, Roscoe Mitchell, Leroy Jenkins, and others trying to further the development of their new, creative, jazz-based music. Braxton and Srnith, along with many other AACM-identifed players, have toured Europe and Japan extensively, played countless college campuses and festivals in the States, and study and teach music experience which is demonstrated with especial brilliance at their concerts as they bring exciting life to each of their unusual compositions.

Special mention is due Phillip Wilson, who helped instigate some of the most intense, inspired playing of the evening with his non-stop, funky, high-energy precision on the drums. Wilson, who first visited Detroit as a member of the Roscoe Mitchell unit in 1966, used to keep things together for the Paul Buttterfield Band in the late 60's and early 70's, and he literally drove the whole quartet at times with his stomping, arm-waving attack.

This music has been missing here for all too long-it shouldn't be so unusual, really, to experience people like Braxton, Smith, Holland and Wilson at the large concert facilities. Happily, the people at Probity Productions seem determined to bring us even more.