Clifford Fears Dance Theatre "Where Are The Sponsors Of The Arts?" 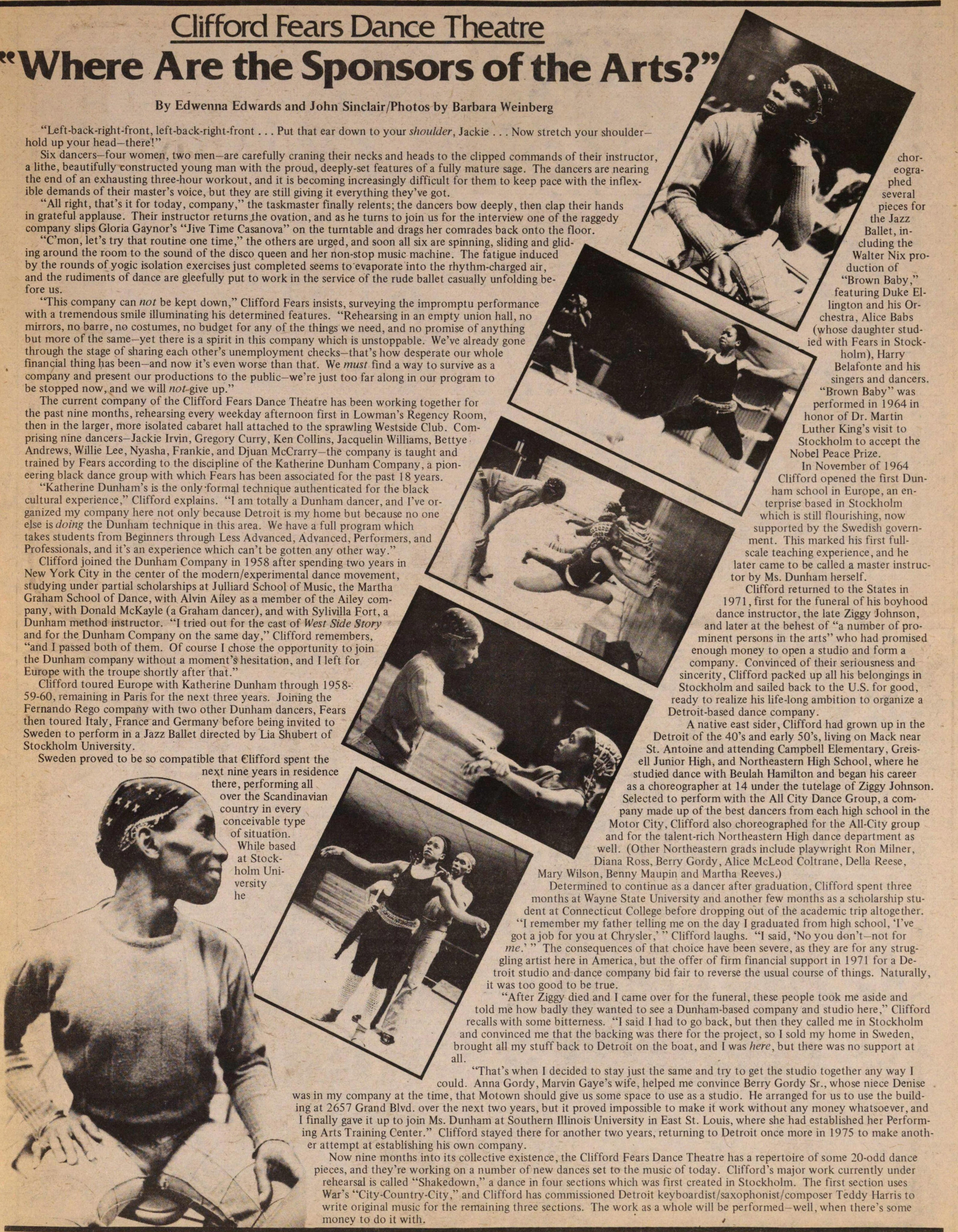 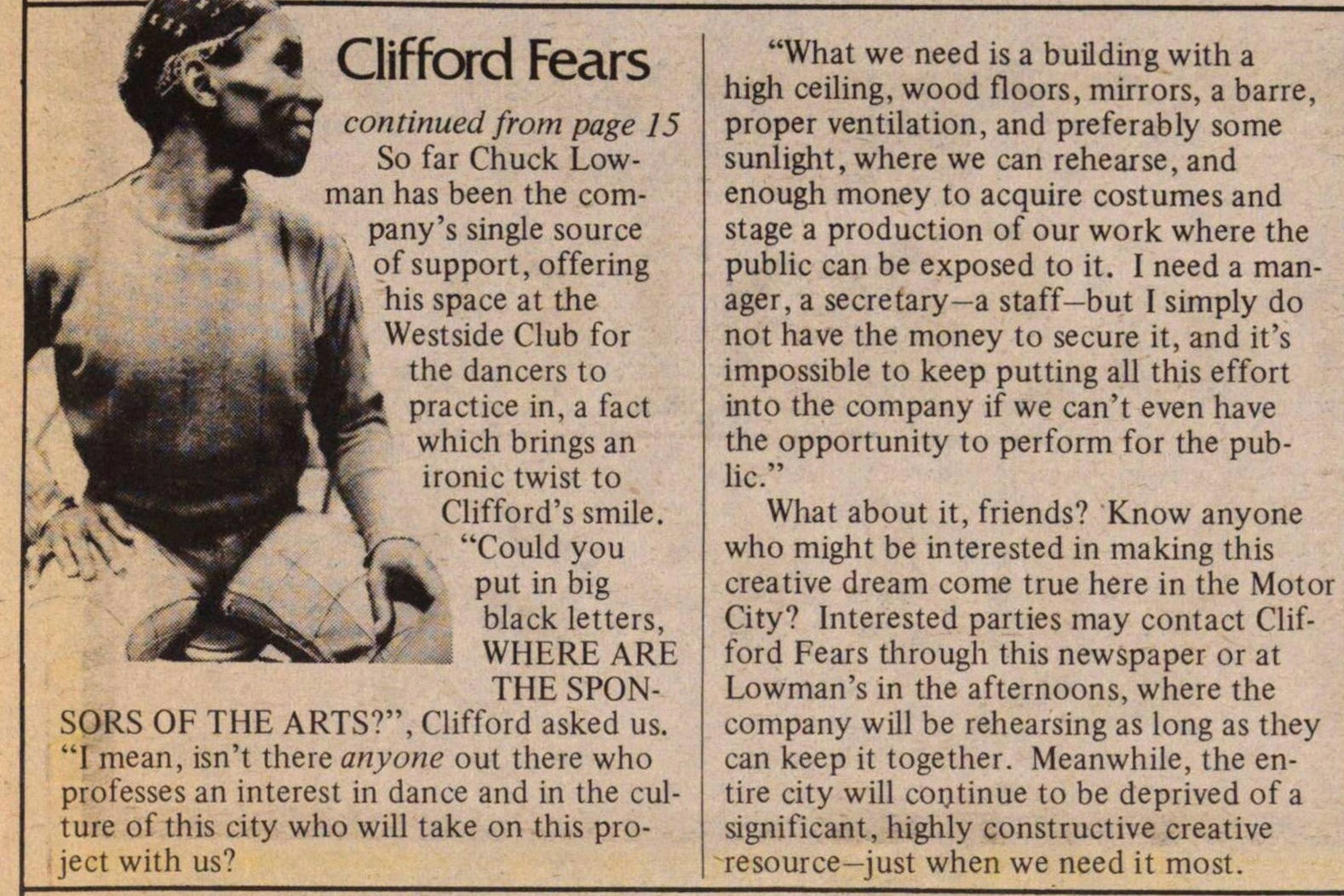 Six dancers-four women, two men-are carefully craning their necks and heads to the clipped commands of their instructor, a lithe, beautifully constructed young man with the proud, deeply-set features of a fully mature sage. The dancers are nearing the end of an exhausting three-hour workout, and it is becoming increasingly difficult for them to keep pace with the inflexible demands of their master's voice, but they are still giving it everything they've got.

"All right, that's it for today, company," the taskmaster finally relents; the dancers bow deeply, then clap their hands in grateful applause. Their instructor returns the ovation, and as he turns to join us for the interview one of the raggedy company slips Gloria Gaynor's "Jive Time Casanova" on the turntable and drags her comrades back onto the floor.

"C'mon, let's try that routine one time," the others are urged, and soon all six are spinning, sliding and gliding around the room to the sound of the disco queen and her non-stop music machine. The fatigue induced by the rounds of yogic isolation exercises just completed seems to evaporate into the rhythm-charged air, and the rudiments of dance are gleefully put to work in the service of the rude ballet casually unfolding before us.

"This company can not be kept down," Clifford Fears insists, surveying the impromptu performance with a tremendous smile illuminating his determined features. "Rehearsing in an empty union hall, no mirrors, no barre, no costumes, no budget for any of the things we need, and no promise of anything but more of the same-yet there is a spirit in this company which is unstoppable. We've already gone through the stage of sharing each other's unemployment checks-that's how desperate our whole financial thing has been-and now it's even worse than that. We must find a way to survive as a company and present our productions to the public-we're just too far along in our program to be stopped now, and we will not give up."

The current company of the Clifford Fears Dance Theatre has been working together for the past nine months, rehearsing every weekday afternoon first in Lowman's Regency Room, then in the larger, more isolated cabaret hall attached to the sprawling Westside Club. Comprising nine dancers-Jackie Irvin, Gregory Curry, Ken Collins, Jacquelin Williams, Bettye Andrews, Willie Lee, Nyasha, Frankie, and Djuan McCrarry-the company is taught and trained by Fears according to the discipline of the Katherine Dunham Company, a pioneering black dance group with which Fears has been associated for the past 18 years.

"Katherine Dunham's is the only formal technique authenticated for the black cultural experience," Clifford explains. "I am totally a Dunham dancer, and I've organized my company here not only because Detroit is my home but because no one else is doing the Dunham technique in this area. We have a full program which takes students from Beginners through Less Advanced, Advanced, Performers, and Professionals, and it's an experience which can't be gotten any other way."

Clifford joined the Dunham Company in 1958 after spending two years in New York City in the center of the modern experimental dance movement, studying under partial scholarships at Julliard school ot Music, the Martha Graham School of Dance, with Alvin Ailey as a member of the Ailey company, with Donald McKayle (a Graham dancer), and with Sylivilla Fort, a Dunham method instructor. "I tried out for the cast of West Side Story and tor the Dunham Company on the same day, Clifford remembers, "and I passed both of them. Of course I chose the opportunity to join the Dunham company without a moment's hesitation, and I left for Europe with the troupe shortly after that."

Clifford toured Europe with Katherine Dunham through 1958-59-60, remaining in Paris for the next three years. Joining the Fernando Regó company with two other Dunham dancers, Fears then toured Italy, France and Germany before being invited to Sweden to perform in a Jazz Ballet directed by Lia Shubert of Stockholm University.

Sweden proved to be so compatible that Clifford spent the next nine years in residence there, performing all over the Scandinavian country in every conceivable type of situation. While based at Stockholm University he choreographed several  pieces for the Jazz Ballet, including the Walter Nix production of  "Brown Baby," featuring Duke Ellington and his orchestra, Alice Babs (whose daughter studied with Fears in Stockholm), Harry Belafonte and his singers and dancers. "Brown Baby" was performed in 1964 in honor of Dr. Martin Luther King's visit to Stockholm to accept the Nobel Peace Prize.

In November of 1964 Clifford opened the first Dunham school in Europe, an enterprise based in Stockholm which is still flourishing, now supported by the Swedish government. This marked his first scale teaching experience, and he later came to be called a master instructor by Ms. Dunham herself.

Clifford returned to the States in 1971, first for the funeral of his boyhood dance instructor, the late Ziggy Johnson, and later at the behest of "a number of  imminent persons in the arts who had promised enough money to open a studio and form a company. Convinced of their seriousness and sincerity, Clifford packed up all his belongings in Stockholm and sailed back to the U.S. for good, ready to realize his life-long ambition to organize a Detroit-based dance company.

A native east sider, Clifford had grown up in the Detroit of the 40's and early 50's, living on Mack near St. Antoine and attending Campbell Elementary, " Greisell Junior High, and Northeastern High School, where he studied dance with Beulah Hamilton and began his career as a choreographer at 14 under the tutelage of Ziggy Johnson. Selected to pertorm with the All City Dance Group, a company made up of the best dancers from each high school in the Motor City, Clifford also choreographed for the All-City group and for the talent-rich Northeastern High dance department as well. (Other Northeastern grads include playwright Ron Milner, Diana Ross, Berry Gordy, Alice McLeod Coltrane, Della Reese, Mary Wilson, Benny Maupin and Martha Reeves.)

Determined to continue as a dancer after graduation, Clifford spent three months at Wayne State University and another few months as a scholarship student at Connecticut College before dropping out of the academic trip altogether. "I remember my father telling me on the day I graduated from high school, 'I've got a job for you at Chrysler,' " Clifford laughs. "I said, 'No you don't-not for me.' "The consequences of that choice have been severe, as they are for any struggling artist here in America, but the offer of firm financial support in 1971 for a Detroit studio and dance company bid fair to reverse the usual course of things. Naturally, it was too good to be true.

"After Ziggy died and I came over for the funeral, these people took me aside and told me how badly they wanted to see a Dunham-based company and studio here, Clifford recalls with some bittemess. "I said I had to go back, but then they called me in Stockholm and convinced me that the backing was there for the project, so I sold my home in Sweden, brought all my stuff back to Detroit on the boat, and I was here, but there was no support at all.

"That's when I decided to stay just the same and try to get the studio together any way I could. Anna Gordy, Marvin Gaye's wife, helped me convince Berry Gordy Sr., whose niece Denise was in my company at the time, that Motown should give us some space to use as a studio. He arranged for us to use the building at 2657 Grand Blvd. over the next two years, but it proved impossible to make it work without any money whatsoever, and I finally gave it up to join Ms. Dunham at Southern Illinois University in East St. Louis, where she had established her Performing Arts Training Center." Clifford stayed there for another two years, returning to Detroit once more in 1975 to make another attempt at establishing his own company.

Now nine months into its collective existence, the Clifford Fears Dance Theatre has a repertoire of some 20-odd dance pieces, and they're working on a number of new dances set to the music of today. Clifford's major work currently under rehearsal is called "Shakedown," a dance in four sections which was first created in Stockholm. The first section uses War's "City-Country-City," and Clifford has commissioned Detroit keyboardist/saxophonist/composer Teddy Harris to write original music for the remaining three sections. The work as a whole will be performed-well, when there's some money to do it with. '

So far Chuck Lowman has been the company's single source of support, offering his space at the Westside Club for the dancers to practice in, a fact which brings an ironic twist to Clifford's smile. "Could you put in big black letters, WHERE ARE THE SPONSORS OF THE ARTS?", Clifford asked us. "I mean, isn't there anyone out there who professes an interest in dance and in the culture of this city who will take on this project with us?

"What we need is a building with a high ceiling, wood floors, mirrors, a barre, proper ventilation, and preferably some sunlight, where we can rehearse, and enough money to acquire costumes and stage a production of our work where the public can be exposed to it. I need a manager, a secretary-a staff-but I simply do not have the money to secure it, and it's impossible to keep putting all this effort into the company if we can't even have the opportunity to perform for the public."

What about it, friends? Know anyone who might be interested in making this creative dream come true here in the Motor City? Interested parties may contact Clifford Fears through this newspaper or at Lowman's in the afternoons, where the company will be rehearsing as long as they can keep it together. Meanwhile, the entire city will continue to be deprived of a significant, highly constructive creative resource-just when we need it most.