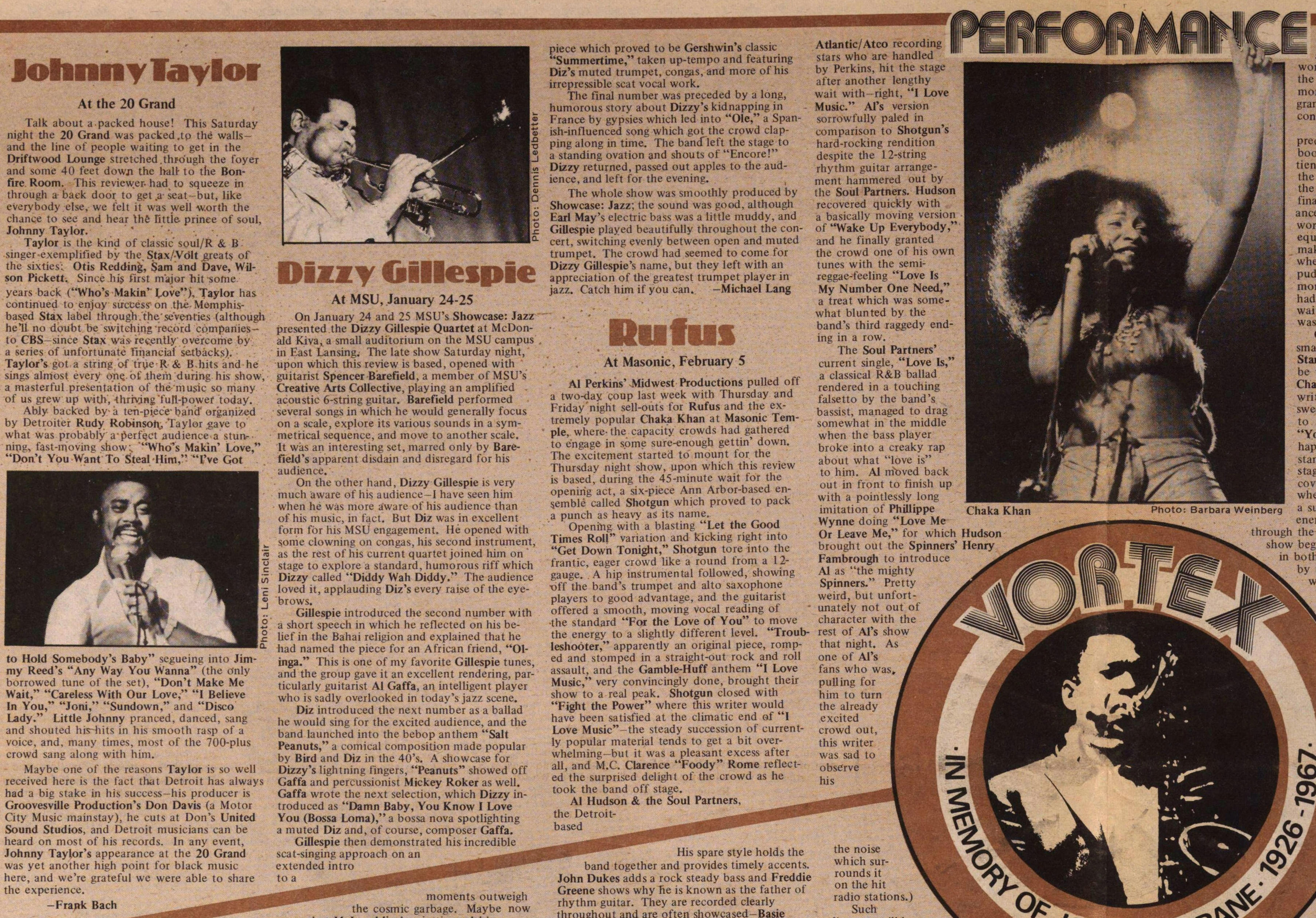 Johnny Taylor At the 20 Grand

Talk about a packed house! This Saturday night the 20 Grand was packed to the walls and the line of people waiting to get in the Driftwood Lounge stretched through the foyer and some 40 feet down the halt to the Bonfire Room. This had to squeeze in through a back door to get a seat–but, like everybody else. we felt it was well worth the chance to see and hear the prince of soul, Johnny Taylor.

Taylor is the kind of classic soul/R & B singer exemplified by the Stax/Volt greats of the sixties: Otis Redding, Sam and Dave, Wilson Pickett. Since his first major hit some years back ("Who's Makin' Love"), Taylor has continued to enjoy success on Memphis-based Stax label through the seventies (although he'll no doubt be switching record companies to CBS-since Stax was recently overcome by a series of unfortunate financial setbacks). Taylor's got a string of true R & B hits and he sings almost every one of them during his show, a masterful presentation of the music so many of us grew up with, thriving full-power today.

Ably backed a ten-piece band organized by Detroiter Rudy Robinson Taylor gave tp what was probably a perfect audience a stunning, fast-moving show., '"Who's Makin' Love," "Don't You Want To Steal Him," "l've Got to Hold Somebody's Baby" segueing into Jimmy Reed's "Any Way You Wanna" (the only borrowed tune of the set), "Don't Make Me Wait," "Careless With Our Love," "I Believe In You," "Joni," "Sundown," and "Disco Lady." Little Johnny pranced, danced, sang and shouted his hits in his smooth rasp of a voice, and, many times, most of the 700-plus crowd sang along with him.

Maybe one of the reasons Taylor is so well received here is the tact that Detroit has always had a big stake in his success-his producer is Groovesville Production's Don Davis (a Motor City Music mainstay), he cuts at Don's United Sound Studios, and Detroit musicians can be heard on most of his records. In any event, Johnny Taylor's appearance at the 20 Grand was yet another high point for black music here, and we're grateful we were able to share the experience.