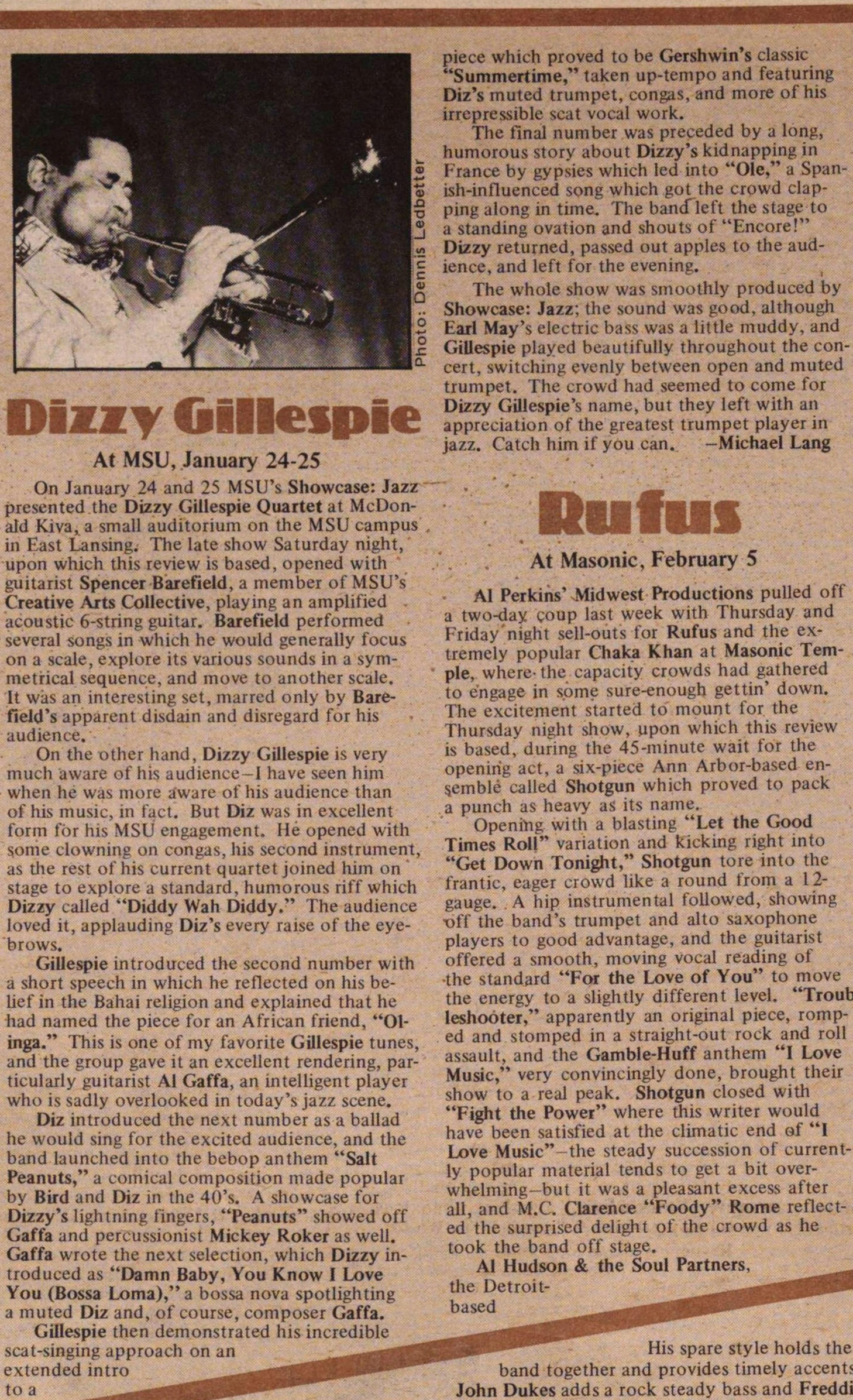 On January 24 and 25 MSU's Showcase: Jazz presented the Dizzy Gillespie Quartet at McDonald Kiva, a small auditorium on the MSU campus in East Lansing. The late show Saturday night, upon which this review is based, opened with guitarist Spencer Barefield, a member of MSU's Creative Arts Collective, playing an amplified acoustic 6-string guitar. Barefield performed several songs in which he would generally focus on a scale, explore its various sounds in a symmetrical sequence, and move to another scale. It was an interesting set, marred only by Barefield's apparent disdain and disregard for his audience.

On the other hand, Dizzy Gillespie is very much aware of his audience–I have seen him when he was more aware of his audience than of his music, in fact. But Diz was in excellent form for his MSU engagement. He opened with some clowning on congas, his second instrument, as the rest of his current quartet joined him on stage to explore a standard, humorous riff which Dizzy called "Diddy Wah Diddy." The audience loved it, applauding Diz's every raise of the eyebrows.

Gillespie introduced the second number with a short speech in which he reflected on his belief in the Bahai religion and explained that he had named the piece for an African friend, "Olinga." This is one of my favorite Gillespie tunes, and the group gave it an excellent rendering, particularly guitarist Al Gaffa, an intelligent player who is sadly overlooked in today's jazz scene.

Diz introduced the next number as a ballad he would sing for the excited audience, and the band launched into the bebop anthem "Salt Peanuts," a comical composition made popular by Bird and Diz in the 40's. A showcase for Dizzy's lightning fingers, "Peanuts" showed off Gaffa and percussionist Mickey Roker as well. Gaffa wrote the next selection, which Dizzy introduced as "Damn Baby, You Know I Love You (Bossa Loma)," a bossa nova spotlighting a muted Diz and, of course, composer Gaffa.

Gillespie then demonstrated his incredible scat-singing approach on an extended intro w to a piece which proved to be Gershwin's classic "Summertime," taken up-tempo and featuring Diz's muted trumpet, congas, and more of his irrepressible scat vocal work.

The final number was preceded by a long, humorous story about Dizzy's kidnappmg in France by gypsies which ted into "Ole," a Spanish-influenced song which got the crowd clapping along in time. The band left the stage to a standing ovation and shouts of "Encore!" Dizzy returned, passed out apples to the audience, and left for the evening.

The whole show was smoothly produced by Showcase: Jazz; the sound was good, although Earl May's electric bass was a little muddy, and Gillespie played beautifully throughout the concert, switching evenly between open and muted trumpet. The crowd had seemed to come for Dizzy Gillespie 's name, but they left with an appreciation of the greatest trumpet player in jazz. Catch him if you can.