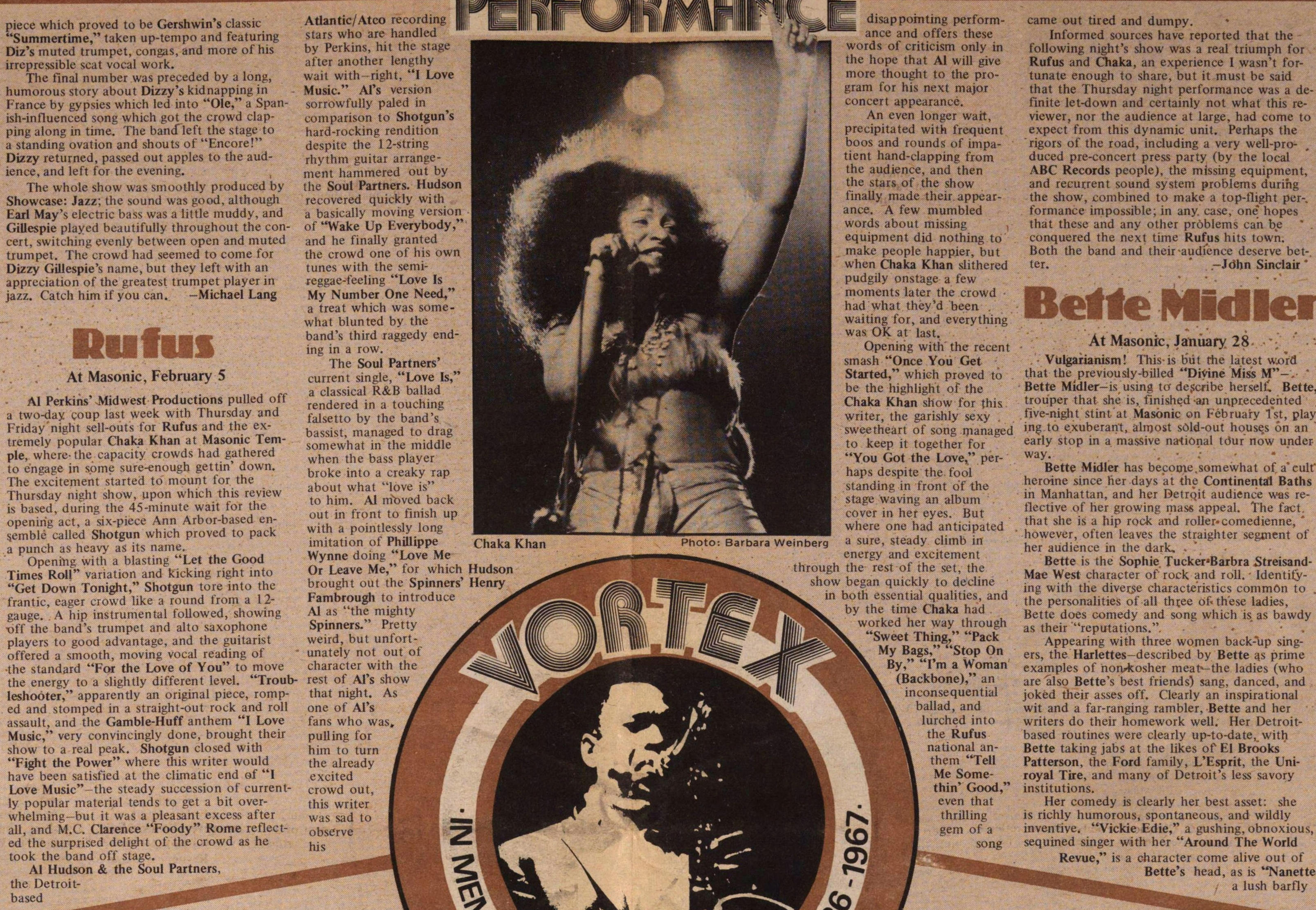 Al Perkins' Midwest Productions pulled off a two-day coup last week with Thursday and Friday night sell-outs for Rufus and the extremely popular Chaka Khan at Masonic Temple, the capacity crowds had gathered to engage in some sure-enough gettin' down. The excitement started to mount for the Thursday night show, upon which this review is based, during the 45-minute wait for the opening act, a six-piece Ann Arbor-based ensemble called Shotgun which proved to pack a punch as heavy as its name.

Opening with a blasting "Let the Good Times Roll" variation and kicking right into "Get Down Tonight," Shotgun tore into the frantic, eager crowd like a round from a 12-gauge. A hip instrumental followed, showing off the band's trumpet and alto saxophone players to good advantage, and the guitarist offered a smooth, moving vocal reading of the standard "For the Love of You" to move the energy to a slightly different level. "Troubleshooter," apparently an original piece, romped and stomped in a straight-out rock and roll assault, and the Gamble-Huff anthem "I Love Music," very convincingly done, brought their show to a real peak. Shotgun closed with "Fight the Power" where this writer would have been satisfied at the climatic end of "I Love Music"–the steady succession of currently popular material tends to get a bit overwhelming–but it was a pleasant excess after all, and M.C. Clarence "Foody" Rome reflected the surpried delight of the crowd as he took the band off stage.

Al Hudson & the Soul Partners, the Detroit-based Atlantic/Ateo recording stars who are handled by Perkins, hit the stage after another lengthy wait with right, "I Love Music." Al's version sorrowfully paled in comparison to Shotgun's hard-rocking rendition despite the 12-string rhythm guitar arrangement hammered out by the Soul Partners. Hudson recovered quickly with a basically moving version of "Wake Up Everybody," and he finally granted the crowd one of his own tunes with the semi-reggae-feeling "Love Is My Number One Need," a treat which was somewhat blunted by the band's third raggedy ending in a row.

The Soul Partners' current single, "Love Is," a classical R&B ballad rendered in a touching falsetto by the band's bassist, managed to drag somewhat in the middle when the bass player broke into a creaky rap about what "love is" to him. Al moved back out in front to finish up with a pointlessly long imitation of Phillippe Wynne doing "Love Me Or Leave Me," tor which Hudson brought out the Spinners' Henry Frambrough to introduce Al as "the mighty Spinners." Pretty weird, but unfortunately not out of character with the rest of Al's show that night. As one of Al's I fans who was pulling for him to turn the already excited I crowd out, this writer was sad to observe his disappointing performance and offers these words of criticism only in the hope that Al will give more thought to the program for his next major concert appearance.

An even longer wait, precipitated with frequent boos and rounds of impatient hand-clapping from the audience, and then the stars of the show finally made their appearance. A few mumbled words about missing equipment did nothing to make people happier, but when Chaka Khan slithered pudgily onstage a few moments later the crowd had what they'd been waiting for, and everything was OK at last.

Opening with the recent smash "Once You Get Started," which proved to be the highlight of the Chaka Khan show for this writer, the garishly sexy sweetheart of song managed to keep it together for "You Got the Love," perhaps despite the fool standing in front of the stage waving an album cover in her eyes. But where one had anticipated a sure, steady climb in energy and excitement through the rest of the set, the show began quickly to decline in both essential qualities, and by the time Chaka had worked her way through "Sweet Thing," "Pack My Bags," "Stop On By," "I'm a Woman (Backbone)," an inconsequential ballad, and lurched into the Rufus national anthem "Tell Me Somethin' Good," even that thrilling gem of a song carne out tired and dumpy.

Informed sources have reported that the following night's show was a real triumph for Rufus and Chaka. an experience I wasn't fortunate enough to share, but it must be said that the Thursday night performance was a definite let-down and certainly not what this reviewer, nor the audience at large, had come to expect from this dynamic unit. Perhaps the rigors of the road, including a very well-produced pre-concert press party (by the local ABC Records people, the missing equipment, and recurrent sound system problems during the show, combined to make a top-flight performance impossible; in any case, one hopes that these and any other problems can be conquered the next time Rufus hits town. Both the band and their audience deserve better.