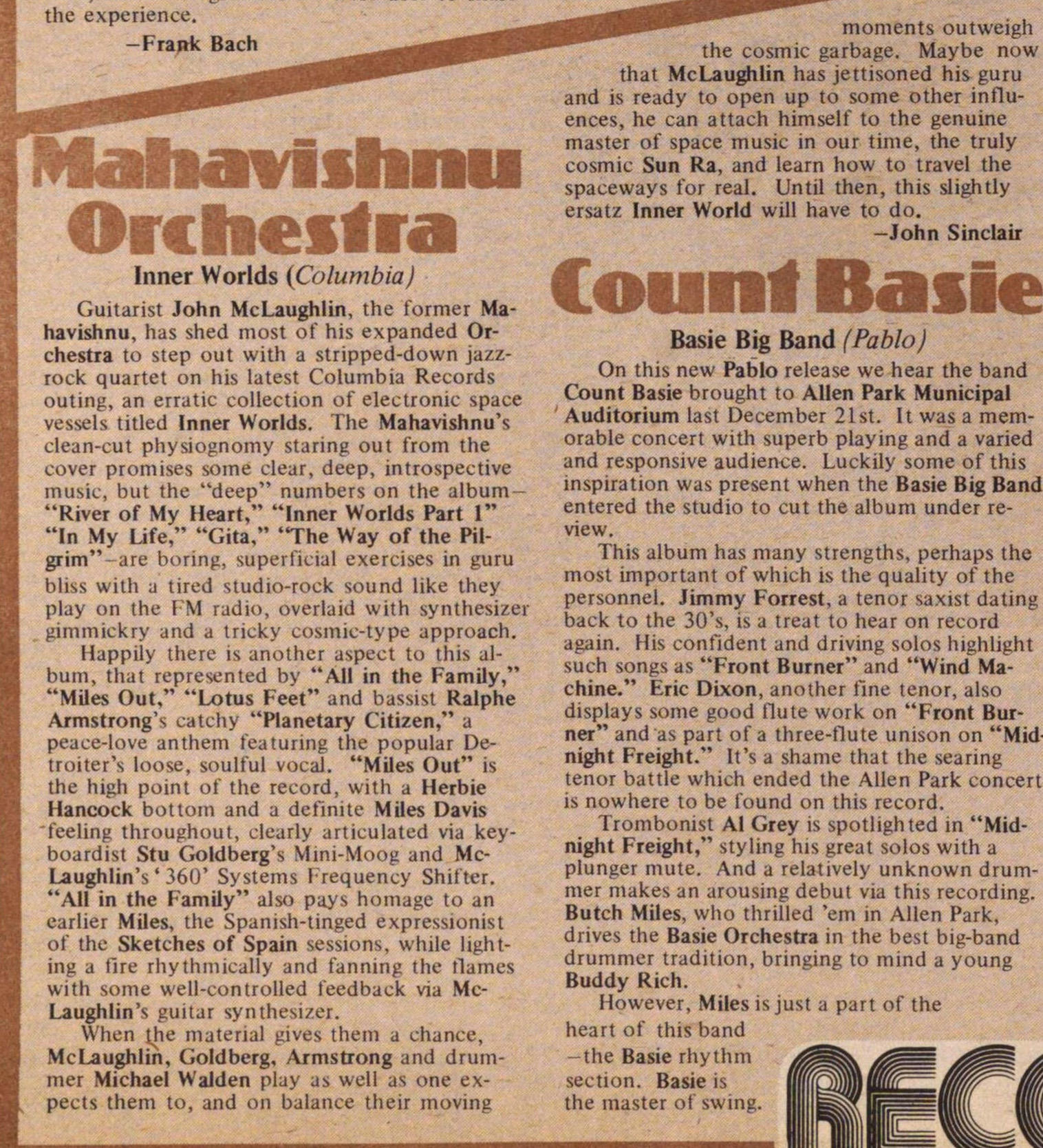 Inner Worids (Columbio) Guitaiist John McLaughlin, the former Mahavishnu, has shed most of his expanded Orchestra to step out with a stripped-down jazzrock quartet on his latest Columbia Records outing, an erratic collection of electronic space vessels titled Inner Worids. The Mahavishnu's dean-cut physiognomy staring out from the cover promises some clear, deep, introspective music, but the "deep" numbers on the album"River of My Heatt," "Inner Worids Part 1" "In My Life," "Gita," "The Way of the Pilgrim"-are boring, supei licial exercises in guru bliss with a tired studio-rock sound like they play on the PM radio, overlaid with synthesizer günmiekry and a tricky cosmic-type approach. Happily there is anothei aspect to this album, that represented by "All in the Family," "Miles Out," "Lotus Feet" and bassist Ralphe Armstrong's catchy "Planetary Citizen," a peace-love anthem featuring the popular Detroiter's loóse, soulful vocal. "Miles Out" is the high point of the record, with a Herbie Hancock bottom and a definite Miles Davis 'feeling throughout, clearly articulated via keyboardist Stu Goldberg's Mini-Moog and McLaughlin's ' 360' Systems Irequency Shit ter. "All in the Family" also pays homage to an earlier Miles, the Spanish-tinged expressionist of the Sketches of Spain sessions, white lighting a fire rhythmically and fanning the tlarnes with some well-controlled feedback via McLaughlin's guitar synthesizer. When Üie material gives them a chance, McLaughlin, Goldberg, Armstiong and drummer Michael Walden play as wel! as one exI pects them to, and on balance their moving Wi moments outweigh the cosmic garbage. Maybe now that McLaughlin has jettisoned his guru and is ready to open up to some other influences, he can attach himself to the genuine master of space music in our time, the truly cosmic Sun Ra, and learn how to travel the spaceways tor real. Until then, this slightly ersatz Inner World will have to do.