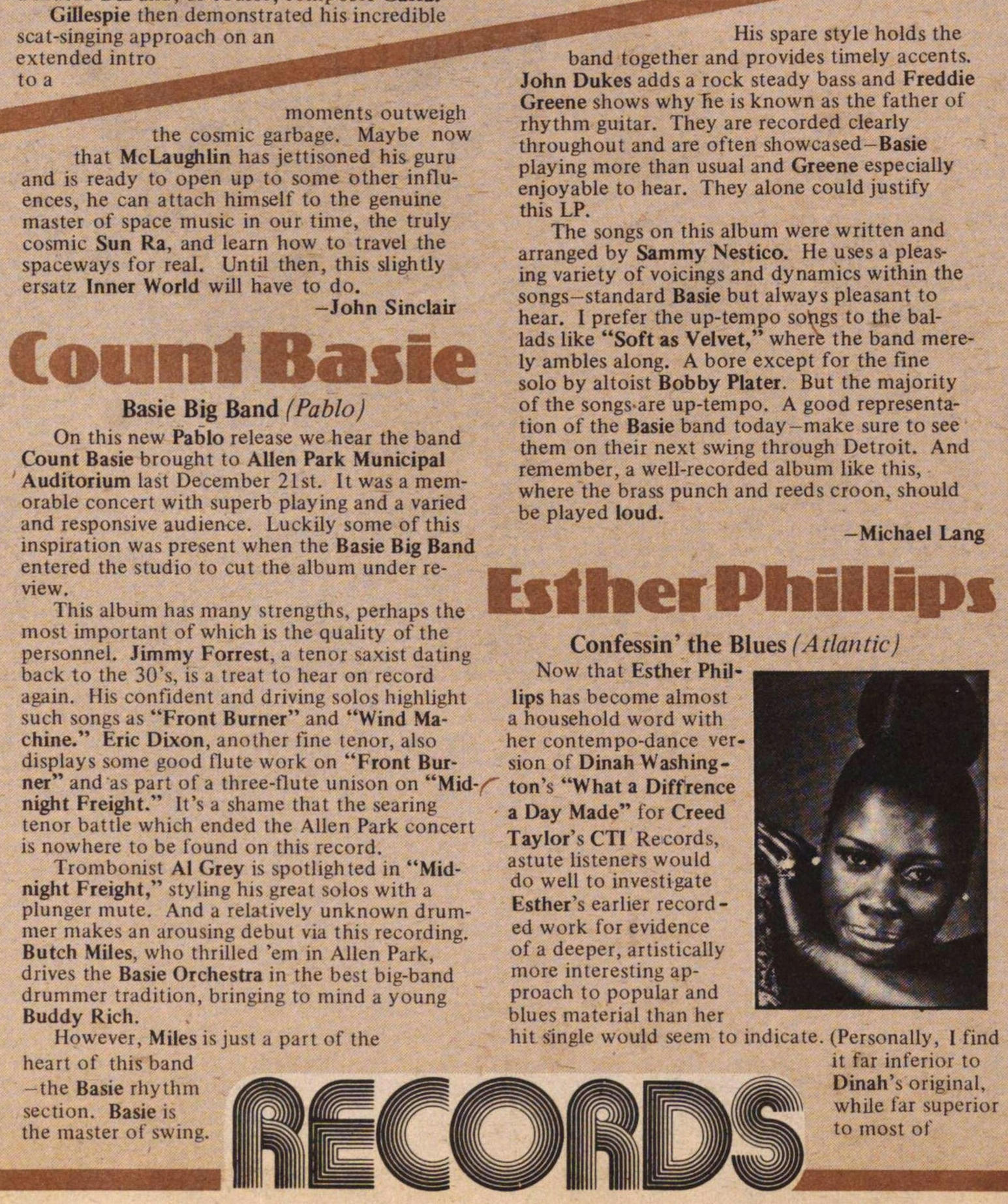 On this new Pablo release we hear the band Count Basie brought to Allen Park Municipal Auditorium last December 21st. It was a memorable concert with superb playing and a varied and responsive audience. Luckily some of this inspiration was present when the Basie Big Band entered the studio to cut the album under review.

This album has many strengths, perhaps the most important of which is the quality of the personnel. Jimmy Forrest, a tenor saxist dating back to the 30s, is a treat to hear on record again. His confident and driving solos highlight such songs as "Front Burner" and "Wind Machine." Eric Dixon, another fine tenor, also displays some good flute work on "Front Burner" and as part of a three-flute unison on "Midnight Freight." lt's a shame that the searing tenor battle which ended the Allen Park concert is nowhere to be found on this record.

Trombonist Al Grey is spotlighted in "Midnight Freight," styling his great solos with a plunger mute. And a relatively unknown drummer makes an arousing debut via this recording. Butch Miles, who thrilled 'em in Allen Park, drives the Basie Orchestra in the best big-band drummer tradition, bringing to mind a young Buddy Rich.

However, Miles is just a part of the heart of this band– Basie rhythm section. Basie is the master of swing. His spare style holds the band together and provides timely accents. John Dukes adds a rock steady bass and Freddie Greene shows why he is known as the father of rhythm guitar. They are recorded clearly throughout and are often showcased–Basie playing more than usual and Greene especially enjoyable to hear. They alone could justify this LP.

The songs on this album were written and arranged by Sammy Nestico. He uses a pleasing variety of voicings and dynamics within the songs-standard Basie but always pleasant to hear. I prefer the up-tempo songs to the ballads like "Soft as Velvet," where the band merely ambles along. A bore except for the fine solo by altoist Bobby Plater. But the majority of the songs are up-tempo. A good representation of the Basie band today–make sure to see them on their next swing through Detroit. And remember, a well-recorded album like this, where the brass punch and reeds croon, should be played loud.