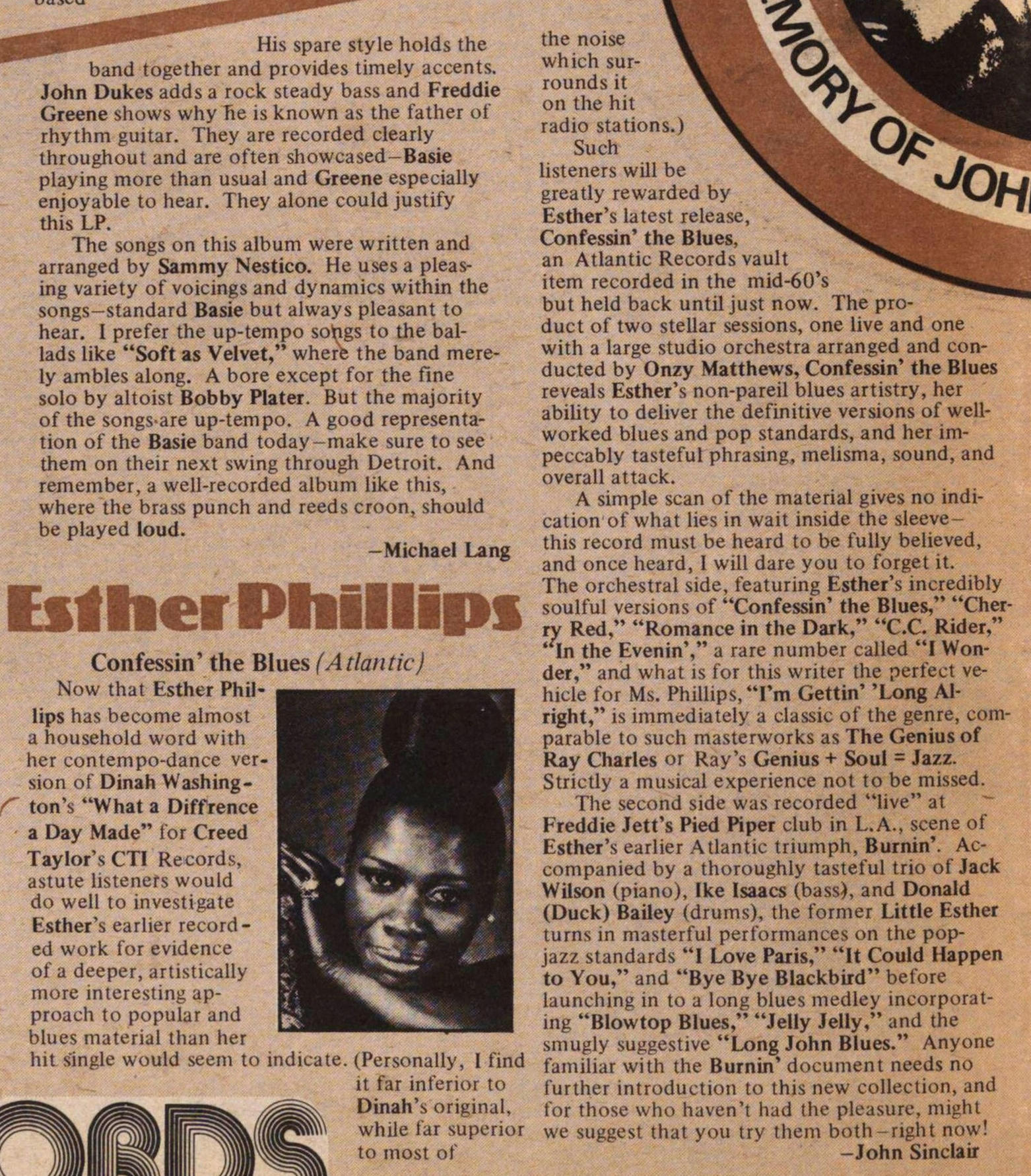 Now that Esther Phillips has become almost a household word with her contempo-dance version of Dinah Washington 's "What a Diffrence a Day Made" tor Creed Taylor's CTI Records, astute listeners would do well to investigate Esther's earlier recorded work for evidence of a deeper, artistically more interesting approach to popular and blues material than her hit single would seem to indicate. (Personally, I find it far interior to Dinah's original, while far superior to most of the noise which rounds it on the hit radio stations.)

Such listeners will be greatly rewarded by Esther's latest release, Confessin' the Blues, an Atlantic Records vault item recorded in the mid-60's but held back until just now. The product of two stellar sessions, one live and one with a large studio orchestra arranged and conducted by Onzy Matthews, Confessin' the Blues reveals Esther's non-pareil blues artistry, her ability to deliver the definitive versions of well-worked blues and pop standards, and her impeccably tasteful phrasing, melisma, sound, and overall attack.

A simple scan of the material gives no indication of what lies in wait inside the sleeve- this record must be heard to be fully believed, and once heard, I will dare you to forget it. The orchestral side, featuring Esther's incredibly soulful versions of "Confessin' the Blues," "Cherry Red," "Romance in the Dark." "C.C. Rider," In the Evenin'," a rare number called "I Wonder," and what is for this writer the perfect vehicle for Ms. Phillips, "I'm Gettin' 'Long Alright," is immediately a classic of the genre, comparable to such masterworks as The Genius of Ray Charles or Ray's Genius + Soul = Jazz. Strictly a musical experience not to be missed.

The second side was recorded "live" at Freddie Jett's Pied Piper club in L.A., scene of Esther's earlier Atlantic triumph, Burnin'. Accompanied by a thoroughly tasteful trio of Jack Wilson (piano), Ike Isaacs (bass), and Donald (Duck) Bailey (drums), the former Little Esther turns in masterful performances on the pop-jazz standards "I Love Paris," "It Could Happen to You," and "Bye Bye Blackbird" before launching in to a long blues medley incorporating "Blowtop Blues," "Jelly Jelly," and the smugly suggestive "Long John Blues." Anyone familiar with the Burnin' document needs no further introduction to this new collection, and for those who haven't had the pleasure, might we suggest that you try them both–right now!