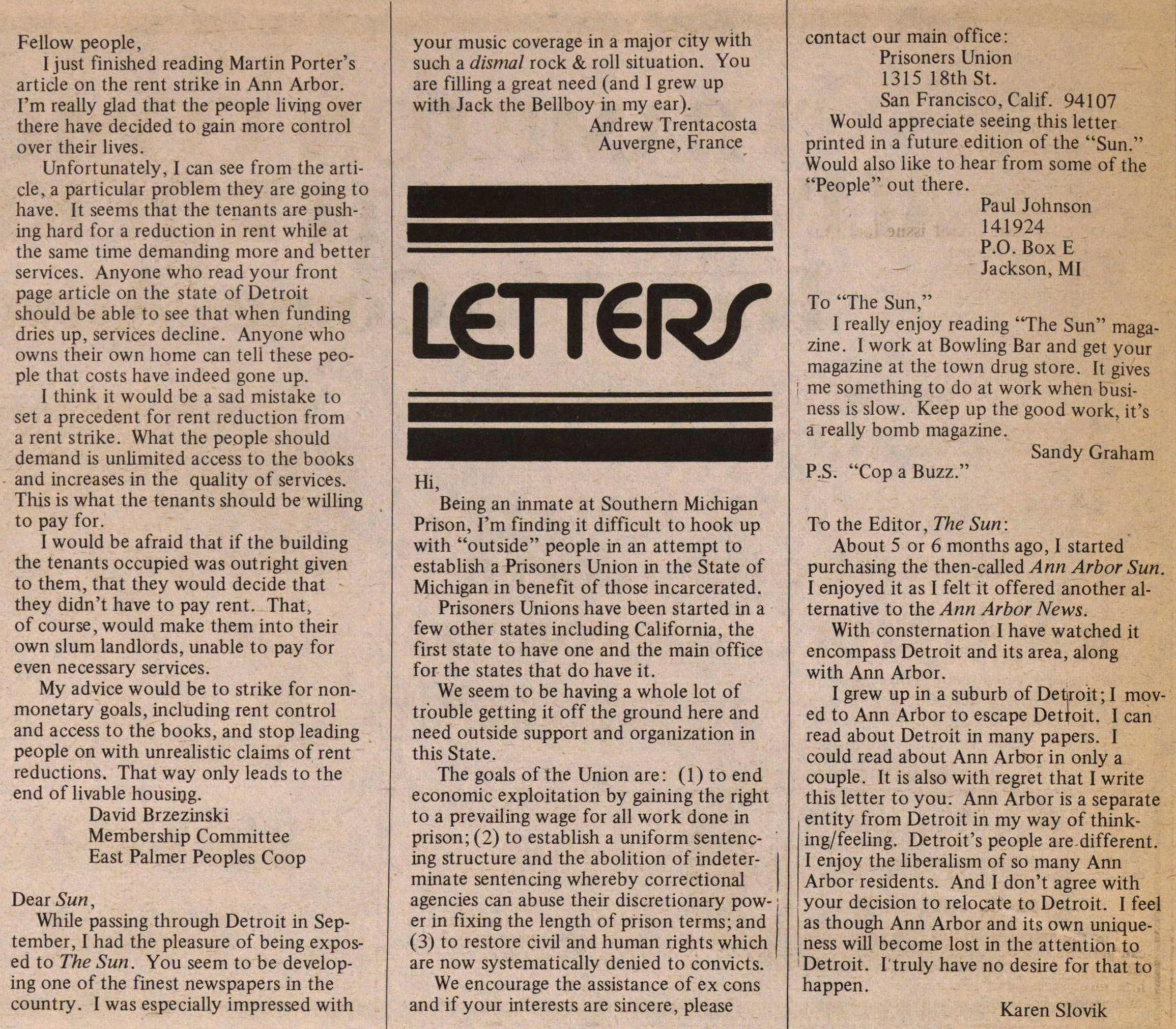 I just finished reading Martin Porter's article on the rent strike in Ann Arbor. I'm really glad that the people living over there have decided to gain more control over their lives.

Unfortunately, I can see from the article, a particular problem they are going to have. It seems that the tenants are pushing hard for a reduction in rent while at the same time demanding more and better services. Anyone who read your front page article on the state of Detroit should be able to see that when funding dries up, services decline. Anyone who owns their own home can tell these people that costs have indeed gone up.

I think it would be a sad mistake to set a precedent for rent reduction from a rent strike. What the people should demand is unlimited access to the books and increases in the quality of services. This is what the tenants should be willing to pay for.

I would be afraid that if the building the tenants occupied was outright given to them, that they would decide that they didn't have to pay rent. That, of course, would make them into their own slum landlords, unable to pay for even necessary services.

My advice would be to strike for non-monetary goals, including rent control and access to the books, and stop leading people on with unrealistic claims of rent reductions. That way only leads to the end of livable housing.

Dear Sun , While passing through Detroit in September, I had the pleasure of being exposed to The Sun. You seem to be developing one of the finest newspapers in the country. I was especially impressed with your music coverage in a major city with such a dismal rock & roll situation. You are filling a great need (and I grew up with Jack the Bellboy in my ear).

Being an inmate at Southern Michigan Prison, I'm finding it difficult to hook up with "outside" people in an attempt to establish a Prisoners Union in the State of Michigan in benefit of those incarcerated.

Prisoners Unions have been started in a few other states including California, the first state to have one and the main office for the states that do have it.

We seem to be having a whole lot of trouble getting it off the ground here and need outside support and organization in this State.

The goals of the Union are : ( 1 ) to end economic exploitation by gaining the right to a prevailing wage for all work done in prison; ( 2 ) to establish a uniform sentencing structure and the abolition of indeterminate sentencing whereby correctional agencies can abuse their discretionary power in fixing the length of prison terms; and ( 3 ) to restore civil and human rights which are now systematically denied to convicts.

We encourage the assistance of ex cons and if your interests are sincere, please contact our main office:

Would appreciate seeing this letter printed in a future edition of the "Sun." Would also like to hear from some of the "People" out there.

I really enjoy reading "The Sun" magazine. I work at Bowling Bar and get your magazine at the town drug store. It gives me something to do at work when business is slow. Keep up the good work, it's a really bomb magazine.

To the Editor, The Sun:

About 5 or 6 months ago, I started purchasing the then-called Ann Arbor Sun. I enjoyed it as I felt it offered another alternative to the Ann Arbor News.

With consternation I have watched it encompass Detroit and its area, along with Ann Arbor.

I grew up in a suburb of Detroit; I moved to Ann Arbor to escape Detroit. I can read about Detroit in many papers. I could read about Ann Arbor in only a couple. It is also with regret that I write this letter to you. Ann Arbor is a separate entity from Detroit in my way of thinking/feeling. Detroit's people are different. I enjoy the liberalism of so many Ann Arbor residents. And I don't agree with your decision to relocate to Detroit. I feel as though Ann Arbor and its own uniqueness will become lost in the attention to Detroit. I truly have no desire for that to happen.